Stars of the small screen were out in force for the National Television Awards at London’s 02 Arena on Tuesday.

And Susanna Reid brought the glamour to the star-studded ceremony as she joined the likes of Holly Willoughby, Little Mix’s Jesy Nelson, Maura Higgins and Molly-Mae Hague on the red carpet.

The Good Morning Britain host, 49, turned heads as she slipped into a plunging ruby floor-length dress, which was adorned with thousands of tiny sequins. 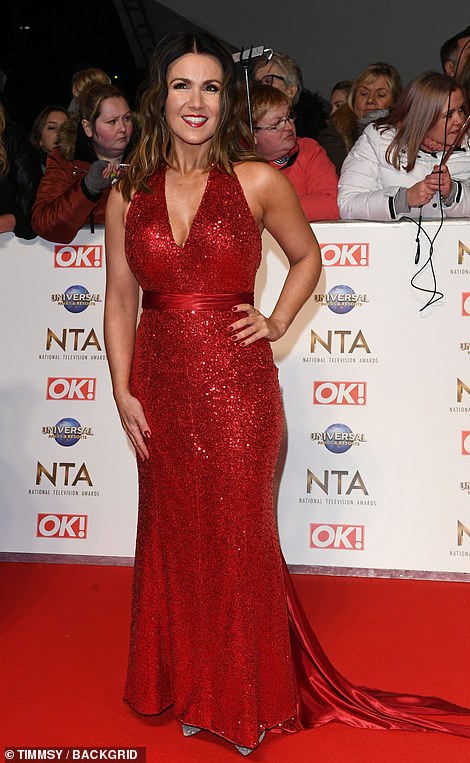 Show-stopper: Susanna Reid brought the glamour as she led the stars on the red carpet at the National Television Awards at London ‘s 02 Arena on Tuesday

Susanna showcased her jaw-dropping cleavage in the figure-hugging dress, which cinched her in at the waist with silk belt.

Strutting down the red carpet in silver glittery heels, the presenter sparkled as she gave a broad smile for the cameras.

Susanna wore her hair in soft curls and sported a bronzed tan and striking red lip, which tied her whole outfit together. 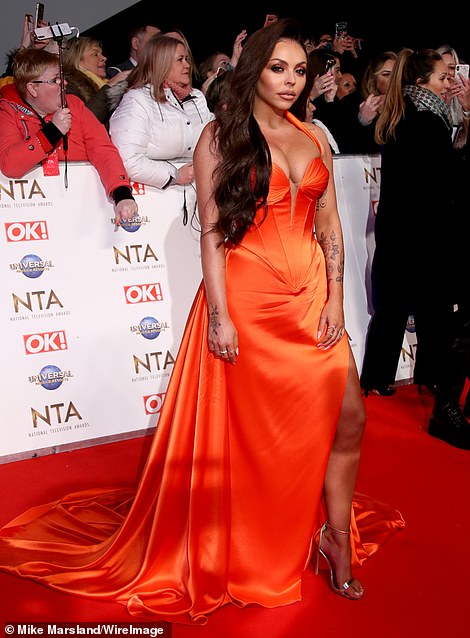 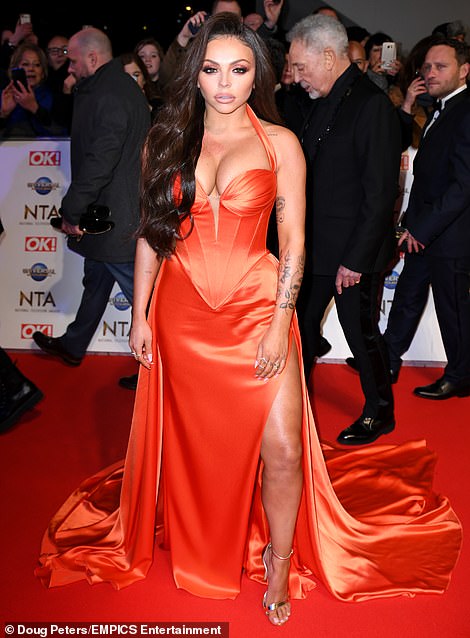 Busty: Jesy Nelson, 28, who is nominated in the Factual category for her documentary on cyber-bullying, showed off her jaw-dropping cleavage in a tangerine silk bustier dress 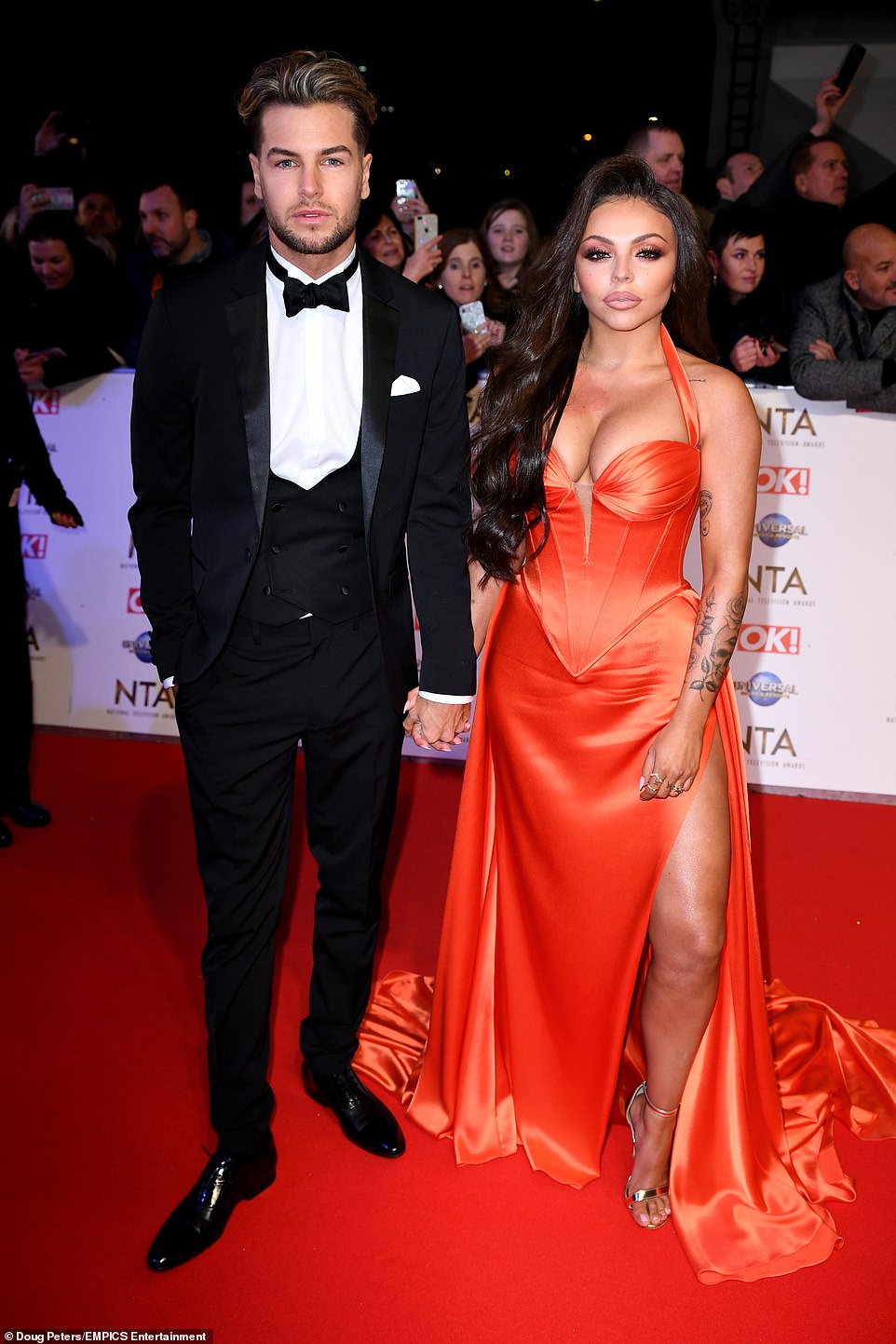 Supportive beau: The Little Mix singer hit the red carpet with her boyfriend of one year Chris Hughes, 27, who looked sharp in a three piece suit

Maura Higgins and her boyfriend Curtis Pritchard were among the first to hit the red carpet for the biggest night in the TV calendar.

The Love Island star, 29, pulled out all the stops in a sheer purple sequin gown, which came complete with feathered cuffs and a high neckline, while Curtis, 23, looked dapper in a black suit with matching purple pocket handkerchief.

Maura, who is currently competing on Dancing On Ice, took a night off from rehearsals to attend the glittering ceremony. 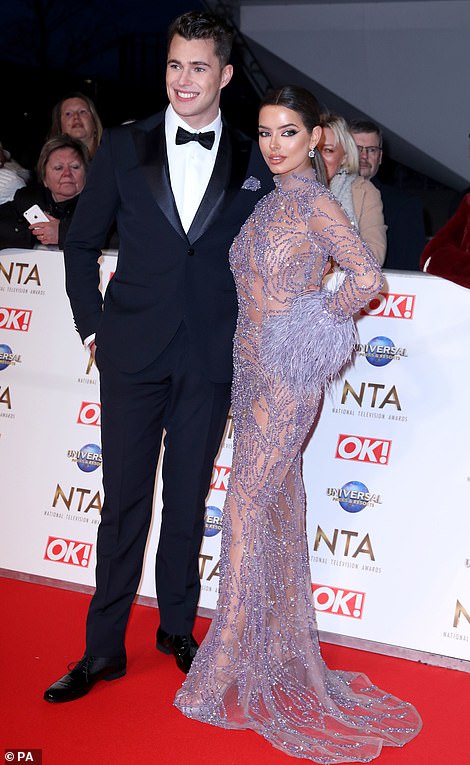 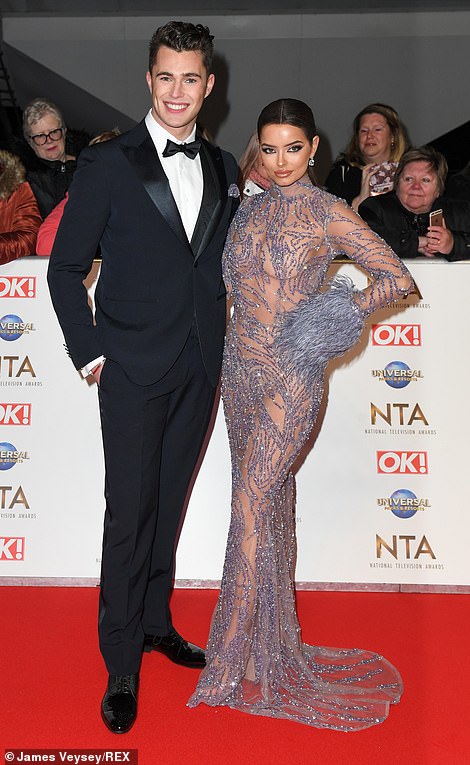 Wow factor: Maura Higgins and her boyfriend Curtis Pritchard were among the first to hit the red carpet 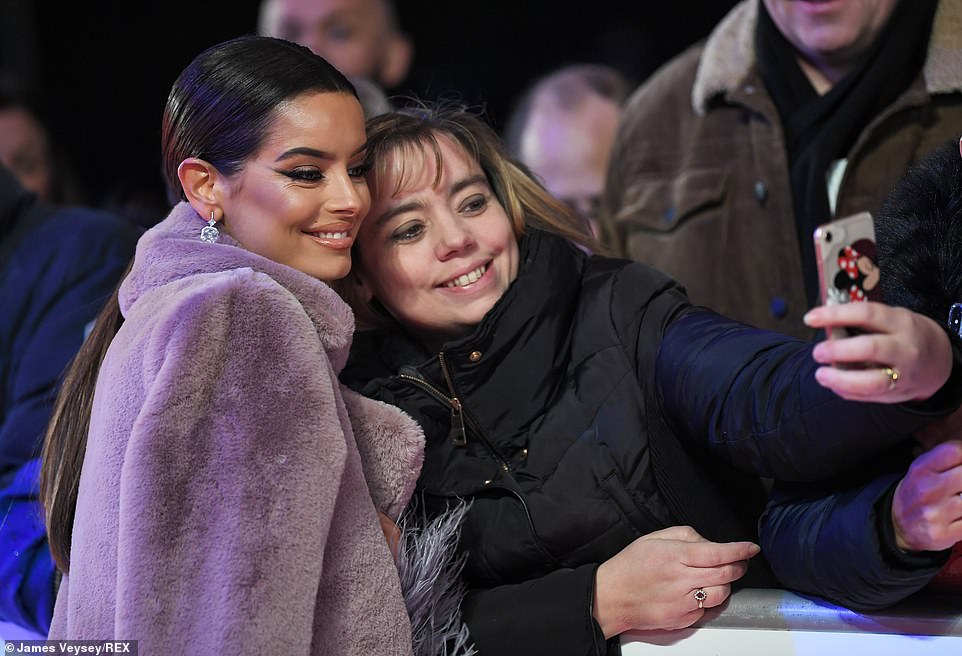 Lavender girl: Feeling the January chill, Maura wrapped-up in a plush lilac coat as she stopped to pose with fans

The Irish beauty put on a dazzling display as she sauntered down the red carpet in the see-through number, which was adorned with thousands of lilac beads.

Maura slicked her brunette hair back into a sleek, low ponytail and finished off her show-stopping look with silver drop earrings.

Jessica Wright, of TOWIE fame, was also one of the early arrivals. The reality star, 34, flaunted her tanned legs in a black skintight shiny dress with a soaring thigh-high slit.

The television personality strutted down the red carpet in sky-high Louboutin heels and amped up the glamour with a bronzed make-up look.

Another former TOWIE star was Joey Essex, 29, who brought his girlfriend Lorena Medina, 27, to the annual celebrations.

Joey opted for a tailored three-piece suit, while his model girlfriend, whom he met during his stint on Celebrity Ex On The Beach, showed off her figure in an emerald floor-length gown.

Gabby Allen hit the red carpet with a plumage of pink feathers. The Love Island star, 26, slipped into a strapless fringed minidress, matching coat and toted a pink YSL handbag.

Leading the soap star was Maisie Smith, 18, who cut a glam figure in an off-the-shoulder tasselled silver dress, which featured a sweetheart neckline

Standing tall in a pair of perspex heels, the screen star wore her voluminous tresses in a sleek blowout with a centre-parting while rounding out her look with a generous application of glam makeup.

Shona, 28, wowed in a sleeveless figure-hugging red gown, which featured a bejewelled neckline and a keyhole cutout at the bosom.

With her raven locks styled in a wavy updo, she posed alongside Natalie, 36, who cut a chic figure in a black pantsuit with a lacy top.

The National Television Awards is taking place at London’s O2 Arena, and is set to be hosted by David Walliams for the first time.

In February, Dermot O’ Leary announced that he would be stepping down after 10 years presenting the show, having himself taken over from Sir Trevor McDonald.

One of the biggest nights in the TV calendar, stars from a rage of shows don their most glamorous looks to attend the lavish ceremony.

The most hotly contested category is Drama, which will see Killing Eve, Peaky Blinders, Line Of Duty, Call The Midwife and Casualty go head-to-head for the top prize.

Line Of Duty left viewers gripped in the spring when it returned with its fifth series, while Killing Eve has also been praised by fans despite the departure of showrunner Phoebe Waller-Bridge.

Gentleman Jack – which was praised by viewers for Suranne Jones’ performance as  the 19th Century lesbian Anne Lister – has been nominated for Best New Drama against Chernobyl, A Confession, Cleaning Up and The Capture.

Chernobyl has also been acclaimed as one of the greatest TV shows in history, and won big at the Golden Globes on Sunday by scooping Best Limited Series or TV Movie. 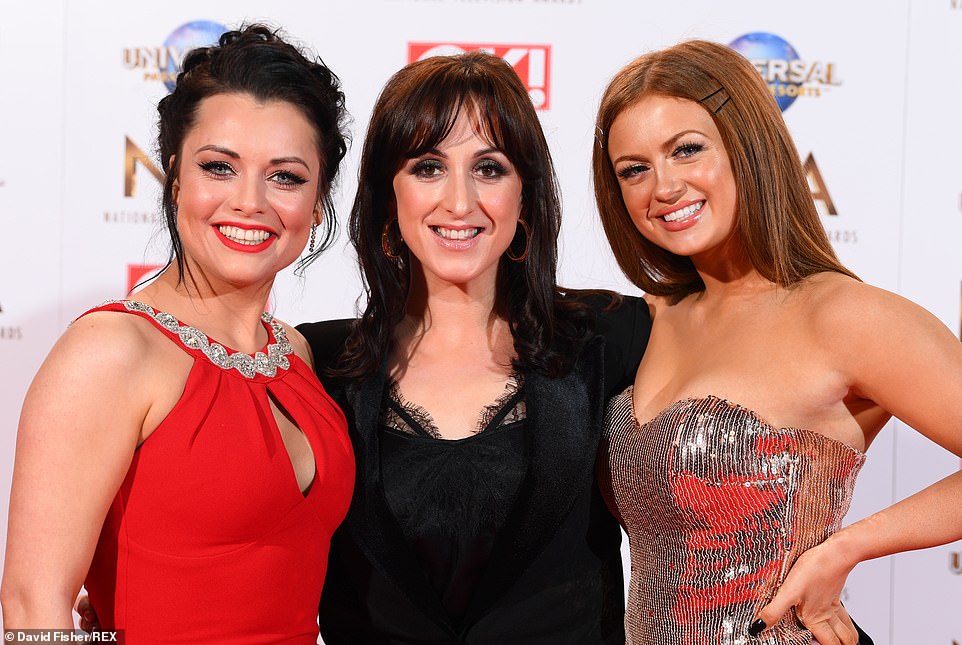 All smiles: The co-stars were all smiles as they posed together on the star-studded red carpet

Peaky Blinders has continued to be a huge success with its fifth series earning the show’s highest ratings ever, and writer Stephen Knight has already confirmed that production is underway for series six.

Meanwhile Jodie has already won a slew of awards for her performance as the ruthless assassin Villanelle, and it remains to be seen whether she will add an NTA to her collection.

Ant made a triumphant return to screens in January 2019 alongside presenting partner Dec, after he took a hiatus in 2018 following his drink-drive arrest.

It seems the presenting duo are more beloved than ever as they have been nominated for TV Presenter for the 19th year in a row.

While the pair are inevitably tipped to win the prize, once again they will have stiff competition from Phillip Schofield, Holly Willoughby, Graham Norton and Bradley Walsh.

Among the shows Ant and Dec fronted in 2019 was Britain’s Got Talent, which has also been nominated for Talent Show alongside Dancing On Ice, Strictly Come Dancing and The Voice UK.

Host David has also been nominated in the Best TV Judge category, and will battle it out with close pal Simon Cowell, as well as Sir Tom Jones (The Voice UK), will.i.am (The Voice UK/ The Voice Kids), and RuPaul (RuPaul’s Drag Race UK).

In the comedy category, Phoebe Waller-Bridge’s lauded comedy Fleabag will go up against Ricky Gervais’ After Life, as well as Derry Girls, Sex Education, and former winner Mrs Brown’s Boys.

Little Mix star Jesy Nelson was praised by fans and viewers for her documentary on the impact of cyber-bullying, and the BBC Three special has been nominated in the Factual category.

The special will compete against Ambulance, Gogglebox, Paul O’Grady: For The Love Of Dogs and Gordon, Gino and Fred: Road Trip.

In Serial Drama Performance, Coronation Street’s Katie McGlynn has earned her first ever NTA nomination, following her emotional exit scenes in October when Sinead Tinker lost her battle with cancer. 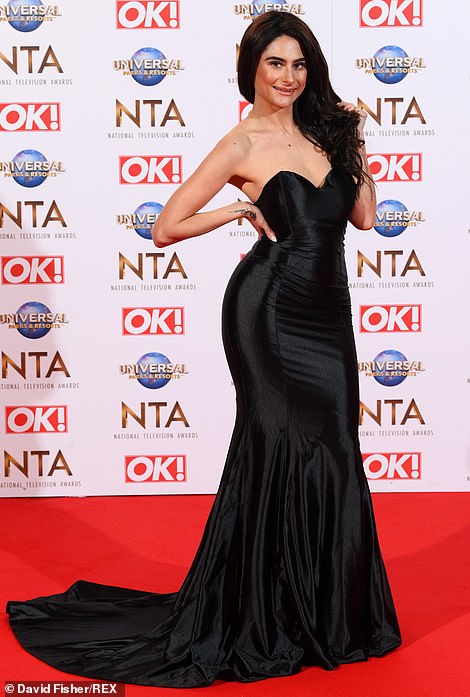 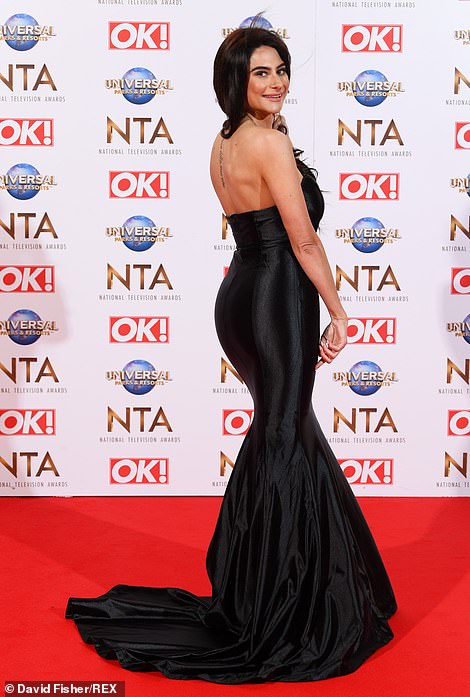 Going to the ball: The Apprentice winner Camila Lepore wowed in a strapless satin ballgown which featured a sweetheart neckline and fishtail design

All of the cast members have featured prominently in hard-hitting storylines, as Danny Dyer’s Mick Carter has seen his marriage in turmoil as his wife Linda’s drinking problems continue to escalate.

Danny Miller’s Aaron Dingle faced the tragedy of his husband Robert being jailed for life, after he attacked his sister Victoria’s rapist Lee in violent scenes.

Meanwhile Gregory’s James Nightingale was recently unmasked as one of the culprits in Mercedes McQueen’s shooting, and he has struggled to hide the guilt around his involvement in the crime.

While the Big Four soaps will all compete for the Serial Drama Award, for Newcomer the nominees are Jurrell Carter (Nate Robinson in Emmerdale), Peter Ash (Paul Foreman in Coronation Street), Max Bowden (Ben Mitchell in EastEnders) and Imran Adams (Mitchell Deveraux in Hollyoaks).

Love Island has been nominated for Challenge Show alongside The Circle, The Apprentice, MasterChef and The Great British Bake Off.

Some of the nation’s most popular daytime shows are facing off against each other for the Live Magazine Show award.

This Morning is up for the gong yet again, having previously won nine years in a row.

They will go head-to-head with Loose Women, Good Morning Britain and Sunday Brunch.

I’m A Celebrity is nominated for the Bruce Forsyth Entertainment Award along with The Graham Norton Show, The Chase and RuPaul’s Drag Race UK. 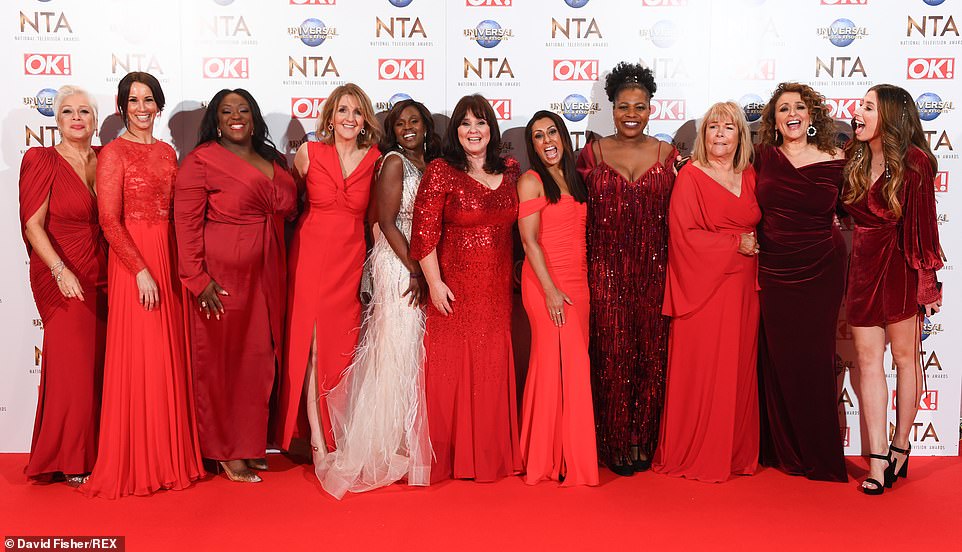 Practically perfect: The Loose Women cast all opted for the red ensembles for the glittering ceremony

Jesy Nelson: Odd One Out

Paul O’ Grady: For The Love of Dogs