A nude model has revealed she was forced to spend the night in an Egyptian prison cell after being caught during a photoshoot at a temple in Luxor.

Belgian nude model Marisa Papen, who describes herself as a ‘free-spirited and wild-hearted expressionist’, travelled with photographer Jesse Walker to North Africa for a shoot at some of the most famous landmarks of ancient Egypt.

Having bribed young men patrolling temples in Giza, she narrowly avoided trouble and was able to strip off and pose for photographs.

But when four Egyptian security guards spotted them in Luxor, both Papen and Walker were arrested and locked up.

Belgian nude model Marisa Papen, who describes herself as a ‘free-spirited and wild-hearted expressionist’, pictured here outside a temple in Egypt before she was arrested 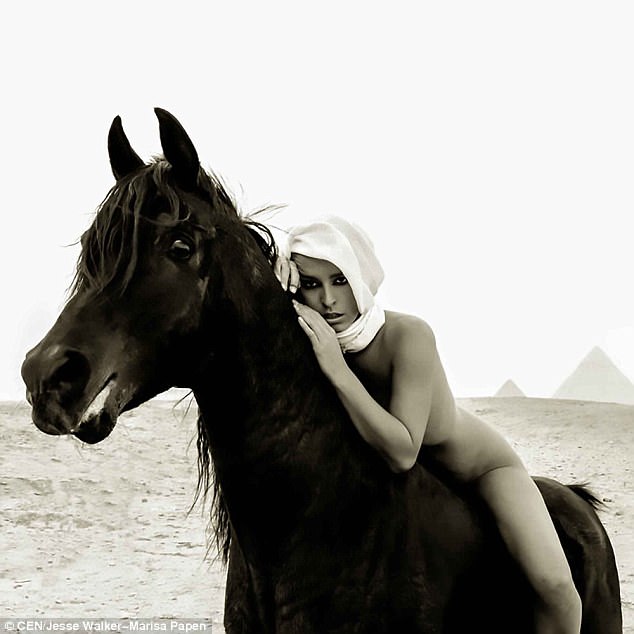 The Belgian nude model pictured on the back of a horse with two pyramids peering over the sand in the distance. Having bribed young men patrolling temples in Giza, she narrowly avoided trouble and was able to strip off and pose for photographs

Papen said: ‘The last two years I have walked wild and free in at least 50 countries. Rarely do I end up in precarious situations. Until April this year, in Egypt.’

The nude photo model, from the Flanders region of Belgium, met up in Cairo with photographer Walker who flew in all the way from Australia to do the shoot.

And even though the pair said they were aware of the cultural, political and religious differences between Egypt and the West when it comes to nudity, the adventure ended differently than they both expected.

Early in their trip during the first photoshoot near the famous pyramids of Giza, the two got into trouble.

They reportedly bribed a security guard to start the photoshoot when two other men showed up.

Papen said: ‘I was suddenly completely awake, like a cold shower at 5am in the morning.

‘We tried to explain them that we were making art with the highest respect for Egyptian culture, but they could not see a connection between nudity and art.

In the end, Papen and Walker managed to stay out of trouble by bribing them with £15.

After Giza, the two travelled to Luxor to visit the vast temple complex of Karnak to shoot pictures with the theme of ‘dance’, which is where their trip unraveled.

When Karnak turned out to be even more guarded than the pyramids at Giza, Papen and Walker had to think of another plan for their shoot.

They decided to hide in the complex just before closing time and to start with the photoshoot ‘making pirouettes in Cleopatra’s footprints’ after all the other people had left.

Papen said: ‘But you can guess what happened next. Busted, once again. And yes, this time we were in some serious trouble.’

Four security guards caught the two and brought them ‘like two beaten dogs’ to the local police. 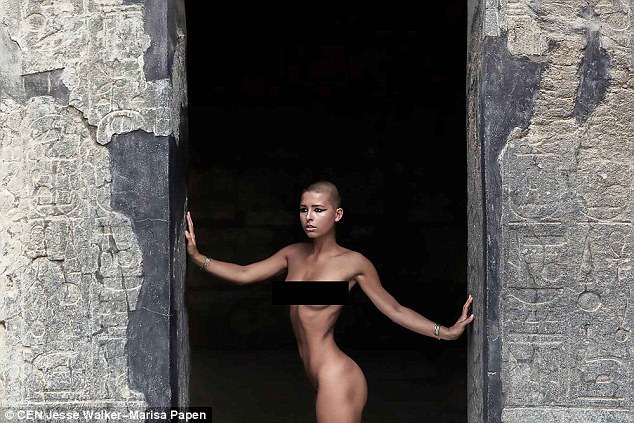 The Belgian stands at the entrance of a temple in Egypt. Moments later, four security guards spotted them in Luxor, both Papen and her photographer Jesse Walker were arrested and locked up

Papen said: ‘Without being able to share words, I made it clear to Jesse that he had to delete the images if he saw the tiniest opportunity.

‘Otherwise we would be screwed, big time.’

The Egyptian police officers did not believe the two when they told them they were ‘just testing the light’ and ‘did not take any pictures yet’.

The cops forced Walker to strip down to look for a second SD card, but could not find anything.

The duo were brought from one police station to the other and from court to a local cell and back.

Papen said: ‘I knew that a prison in Egypt looks slightly different then in Belgium or any Westernised country but I had no idea what to expect before actually going in.

‘The first cell we encountered was packed with at least 20 men, some were passed out on the floor, some were squeezing their hands through the rails, some were bleeding and yelling.

‘I had never seen something like this before in real life. Jesse kept telling me, “Marisa don’t look” but there was no way not to look.’

After several hours in horrendous conditions in jail Papen and Walker were brought in front of a judge.

Papen said: ‘We kept playing the role of stupid tourists who had no idea dancing in skin-coloured underwear – we had to change up the story a little bit because otherwise we probably would have never gotten out – on Egyptian ground it wasn’t allowed.

‘Our judge was browsing with his big thumbs through these books that looked as old as the pyramids did.

‘Eventually, he gave us a warning and told us never to do something so foolishly shameful ever again. We nodded simultaneously.’

Back in their hotel room, Walker even managed to recover the deleted pictures off the SD card with special software.

Thanks to her quick-witted reaction during her arrest, Papen is now able to proudly share her amazing story and Walker’s magnificent pictures of the nude Egyptian photoshoot.

Papen said: ‘I do think we created something Cleopatra would have been proud of.’