Number of homes snapped up this year will be highest since the financial crisis, report suggests – and prices will soar 21.5% in the North East by 2024

By Lee Boyce for Thisismoney.co.uk

More homes will be sold in 2021 than in any other year since before the financial crisis, according to a new forecast.

A strong first six months of the year as buyers rushed to snap up homes for a stamp duty saving and a shift in lifestyle and location, means more homes will sell this year than any since 2007, Hamptons predicts.

By the end of 2021, the estate agent forecasts that 1.5million homes will have been sold across Britain.

Strong year: The number of homes shifted this year will be its highest since 2007

It believes property price growth will slow in the coming months. But, despite that, it estimates that values across Britain will be 13.5 per cent higher by 2024.

It expects the North East of England to see the strongest price growth by 2024, with prices expected to rise by 21.5 per cent.

But by then, the average house price in the region will still be 41 per cent below the national average, it predicted, unless economic growth in the region picks up pace.

House prices in Scotland are also tipped for strong growth of 20 per cent over the period.

Hamptons said it believes that the summer of 2021, when a stamp duty holiday started to be tapered, marked peak house price growth. 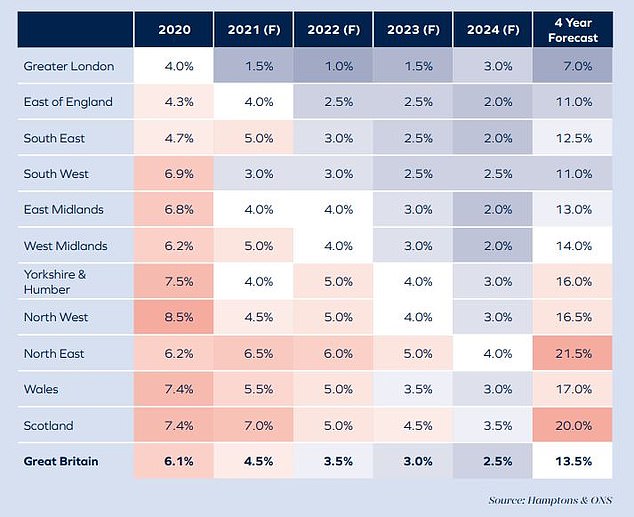 Growth: Britain will see prices up 13.5% as a whole by 2024 – but Scotland and the North East will see the strongest gains

Aneisha Beveridge, head of research at Hamptons, said: ‘The housing market has confounded expectations and forecasts in past months.

‘Back in the autumn of 2020, such were the economic challenges being faced that we could not have envisaged the extraordinary demand for relocation which we have seen this year.

‘But there has been a huge attitudinal change towards property, which cannot be attributed to the stamp duty holiday alone.’

It forecasts that London will have the slowest price growth of 7 per cent by 2024, followed by the East of England, the South West and the South East – all of which will see growth below that Britain-wide figure of 13.5 per cent.

She continued: ‘The pandemic has accelerated the closing of the house price gap between London and the rest of the country.

‘Even so, we still expect London to underperform the rest of the country until 2024, when the cycle is likely to end.’