The number of NHS patients forced to wait longer than a year for routine treatment in London is now 20 times the figure for the whole of England in 2019.

Leaked performance data showed 19,775 patients in the capital were waiting longer than 12 months for procedures such as hip or knee ops by July 19.

In contrast, only 1,032 people across the entire country had not started treatment within a year of being referred in July 2019.

The shocking figures lay bare how Covid-19 has devastated the NHS, with warnings that the health service faces an ‘enormous’ challenge if it wants to catch-up.

NHS data last month revealed 1.5million patients in England were forced to wait at least 18 weeks to start treatment, the most since 2007. Under the health service’s own rulebook, patients should be treated within 18 weeks of a GP referral.

Health bosses fear it could take up to four years to clear the growing backlog of patients needing treatment.

The overall waiting list — at a record-high of 4.4million before the pandemic struck — was described as ticking time bomb.

Top medics have since warned it has detonated, with the decision to postpone tens of thousands of operations during the crisis causing backlog to grow. 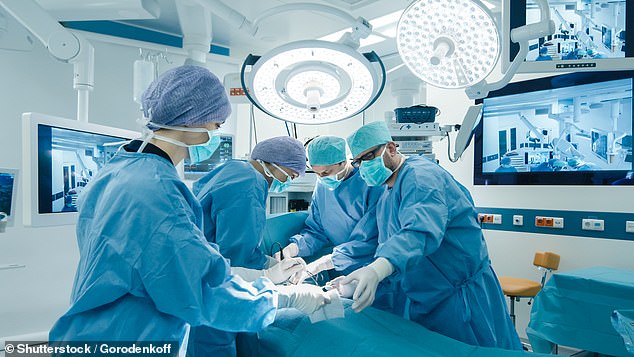 NHS England chief executive, Sir Simon Stevens, has now told hospital bosses to get back to ‘near-normal’ levels of activity or they could face a fine

The data for London — seen by The Independent — was submitted to NHS England by 23 hospitals across the country.

The hospital with the most patients waiting for routine treatment is the Royal Free in Hampstead.

According to the leaked data, the trust had 6,488 patients waiting more than a year by the week ending July 19.

And the Royal Free Foundation Trust, which runs the hospital, said its activity levels were down 60 per cent from normal.

Barts Health Trust, which runs the Royal London Hospital in Whitechapel and St Bartholomew’s Hospital in the City, has also fared badly.

It had more than 2,469 patients waiting more than a year and its activity levels were down 50 per cent from normal.

Chelsea and Westminster Hospital Foundation Trust reported its activity was down 76 per cent.

NHS England chief executive, Sir Simon Stevens, has now told hospital bosses to get back to ‘near-normal’ levels of activity or they could face a fine.

An expert on waiting times who runs the demand and capacity planning company Gooroo, Rob Findlay, told The Independent: ‘If you can’t keep up with demand then waiting lists are going to grow, almost without limit.

YOU’LL HAVE TO BOOK A&E VISITS THIS WINTER

Patients will be asked to book an A&E appointment by calling 111 this winter, NHS bosses have been told.

The plans, revealed in a board meeting for NHS England and NHS Improvement yesterday, are set to be put in place before December.

But hospitals will not turn away patients who turn up without calling ahead of their visit, it was claimed.

Pilot studies of the ring-ahead scheme at casualty departments in Portsmouth and London have reportedly produced good results.

The plans to ‘transform’ A&E care will move towards scrapping the four-hour waiting time target, it was also revealed.

Hospitals will be asked to rapidly adjust to the measures and make improvements as they go, according to board papers seen by The Times.

The standard is 95 per cent of patients visiting A&E should be admitted, transferred or discharged within four hours.

However, the NHS has failed to hit its four-hour benchmark for almost five years in a row.

‘Wherever you draw the line it will inevitably be breached and waiting lists will continue to grow until the NHS can keep up with demand.

‘The rest of this financial year will be about doing as much as they can in difficult circumstances but it won’t be until April before the NHS can turn its hand to a proper recovery plan and that’s likely to take several years.’

He added that what ‘really worries’ him is some of the patients who haven’t been seen could have cancer and other urgent needs which have not yet been diagnosed.

The coronavirus pandemic has added to the growing backlog because some hospitals don’t have the capacity to treat patients while keeping areas safe from infection.

Some hospitals have even had to reduce bed numbers and limit operations.

NHS hospitals have been warned they could face a fine if they are not at 90 per cent of their usual capacity levels by October.

Health bosses will still be able to access private hospital beds until March — but a letter from NHS England chief executive, Sir Simon Stevens, said services must aim to deliver a huge increase in care in NHS hospitals.

The letter sets out plans to address as much of the NHS’s waiting list as possible before winter and to reduce the NHS alert level from four to three, The Times reported.

Data from NHS England last month revealed that only 54,550 patients were admitted to hospital for treatment in May, which was a fraction of the 295,000 recorded this time last year.

A lot of routine care was paused due to the coronavirus pandemic and hospitals are currently thought to be running at around 60 per cent of their usual capacity.

Thousands of non-urgent operations were cancelled at the peak of the pandemic and analysts revealed the NHS faces an ‘enormous challenge’ in catching up with the backlog of patients whose treatments were postponed.

Sir Simon’s letter, co-signed by chief operating officer Amanda Pritchard, outlined that hospitals should aim for 80 per cent of last year’s capacity in September. This will then rise to 90 per cent in October.

At the end of June, hospital bosses warned the coronavirus crisis could mean the NHS are unable to return to normal for as long as four years due to the treatment backlog.

Experts said they believed the waiting list for operations could rise from 4.2million people to 10million by the end of the year.