Number of people employed has plunged by 650,000 since coronvirus chaos erupted

Number of people employed has plunged by 650,000 since coronvirus chaos erupted after tumbling another 74,000 last month with 2.6million on benefits – amid warnings that a THIRD of firms plan to lay off staff soon

The number of people employed fell by another 74,000 last month with 2.6million on benefits, it was revealed today.

Some 650,000 fewer are on the payroll than before the crisis, according to official figures.

Vacancies are at a record low and hours have also tumbled, the Office for National Statistics data show. The claimant count has risen by 112.2 per cent, or 1.4million, since March.

Meanwhile, a survey by the British Chambers of Commerce has found that a third of firms are planning to lay off staff over the next three months.

It came after Boris Johnson insisted he does not have a ‘magic wand’ to save jobs, admitting that a wave of redundancies is looming. The OBR warned this week that four million could be on the dole queue next year.

Some 650,000 fewer are on the payroll than before the crisis, according to official figures 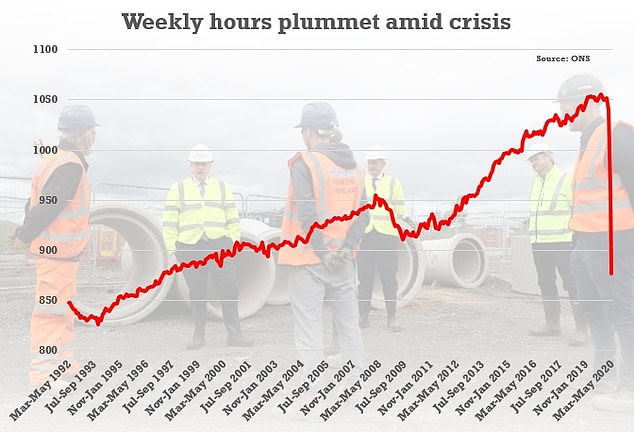 The total number of hours worked in the UK hit a record low in March-May, according to the latest figures

The PM said ‘no-one should underestimate the challenges’ the UK faces after the government’s economic watchdog warned four million people could be on the dole queue by next year.

The OBR said this week that the government faces a gap of at least £60billion in its finances – equivalent to as much as 12p on the basic rate of income tax – as it poured cold water on hopes of a ‘V-shaped’ bounceback from coronavirus.

Underlining the scale of the hit, government liabilities could be £710billion more than previously expected by 2023-4. That is equivalent to nearly £11,000 for every man, woman and child in the UK.

If the ‘downside’ scenario comes to pass the national debt could be roughly £1trillion higher by 2024-25. 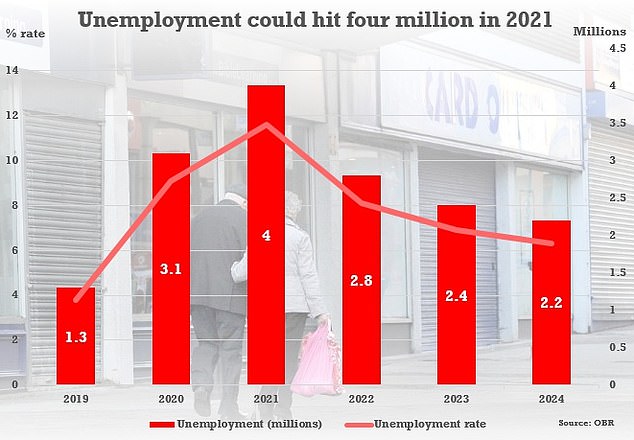 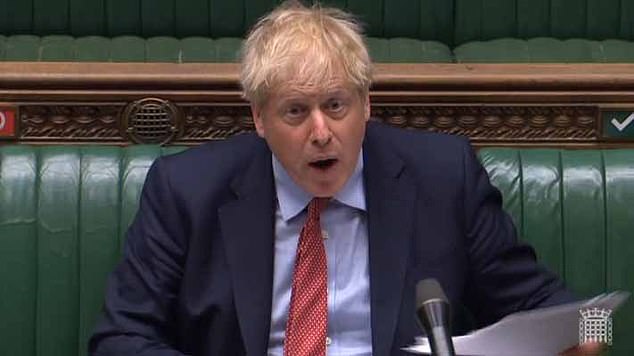 Boris Johnson insisted yesterday that he does not have a ‘magic wand’ to save jobs, admitting that a wave of redundancies is looming

Almost a third of UK firms plan to lay off staff over the next three months in a further sign of the coronavirus pandemic’s devastating impact on Britain’s job market, according to a report.

The British Chambers of Commerce (BBC) quarterly recruitment outlook reveals that 29 per cent of 7,400 firms surveyed expect to axe jobs over the third quarter – a record high for the study.

The report – compiled in conjunction with Totaljobs – found that 28 per cent of firms polled had already cut roles between April and June.

The study also showed that 41 per cent of large companies and 41% of small and medium-sized firms expect to cut staff over the next quarter, with 18% of micro businesses forecasting workforce reductions.

Recruitment also ground to a halt, with just 25 per cent of firms looking to take on new hires in another grim record for the report.