A former nurse died of coronavirus just hours after NHS staff held a round of applause to honour her twin sister, who was killed by the bug only three days before.

Emma Davis, 37, died at Southampton General Hospital today, barely 72 hours after the death of identical twin Katy, who worked as a children’s nurse, at the same hospital.

Their sister Zoe confirmed the tragedy as she revealed the pair, who lived together, were unwell and suffering from other health conditions for some time.

‘They always said they had come into the world together and would go out together as well,’ she told the BBC.

‘There are no words to describe how special they were.’

Katy’s colleagues at Southampton Children’s Hospital, where she worked as the child health risk and patient safety lead, have rushed to pay tribute to her since her death on Tuesday, and have remembered her for her love of make-up.

Staff also held a ‘Clap for Katy’ outside the hospital’s main entrance last night, which came just hours before her twin also fell victim to the virus.

Paediatrician Kate Pryde said: ‘Katy was so passionate about reducing harm and putting our patients first. I had my eye-shadow on for her this evening.. Rest easy Katy.’

Other heartbroken nurses remembered her for her love of make-up.

Paediatric senior sister Sarah Chittock said: ‘Dearest Katy, what an inspirational nurse and young lady. Would go out of her way to help others.

‘Katy always wore a smile and the most wonderful sparkly eye shadow. Your memory will continue to sparkle in the children’s hospital.’

‘What an inspirational nurse’: Children’s nurse Katy Davies, 38, tested positive for coronavirus on admission to University Hospital Southampton and passed away on April 21

Colleague Claire Shields added: ‘Katy was one of the bravest and talented nurses I had the pleasure of knowing. Such a loss, so, so sad.’

Gail Byrne, director of nursing a tUniversity Hospital Southampton NHS Foundation Trust (UHS), said last night’s clap for carers outside the hospital was for Ms Davis and the staff who cared for her.

Paula Head, chief executive at UHS, said: ‘Katy has been described by her colleagues where she worked in child health as a nurse people would aspire to be like and that nursing was more than just a job to her.

‘On behalf of everyone here at UHS, including our patients and the communities we serve, I would like to offer our sincere condolences to her family.’

South East Royal College of Nursing said: ‘She’s been described as a dedicated and selfless nurse who had time for everyone sharing her skills and knowledge to ensure excellent patient care. Rest in peace Katy.’

It comes as tributes also pour in for Dr Vishna Rasiah – another NHS worker who died from Covid-19.

At least 121 health and social care workers are thought to have died from the virus, according to latest figures.

Dr Rasiah, who worked at Birmingham Women’s and Children’s NHS Foundation Trust, was ‘highly regarded’ in the Midlands. 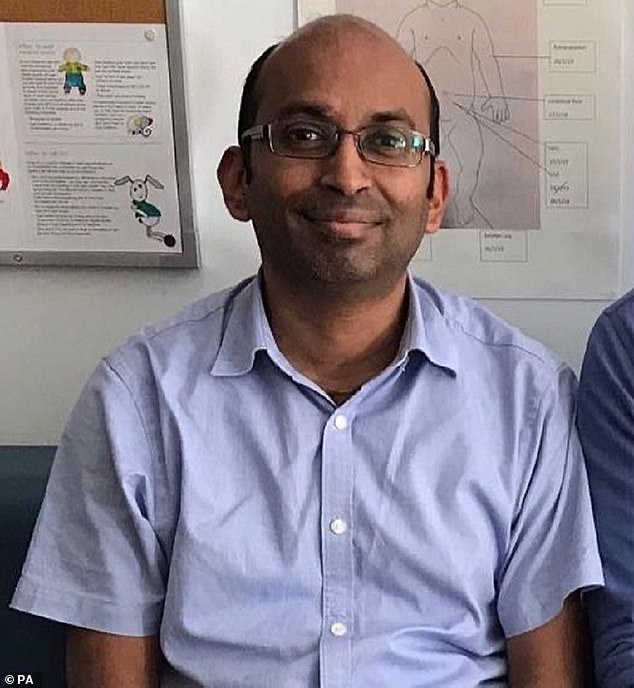 Dr Vishna Rasiah, a ‘highly regarded’ consultant who cared for newborn babies, is one of the latest NHS workers to die from coronavirus 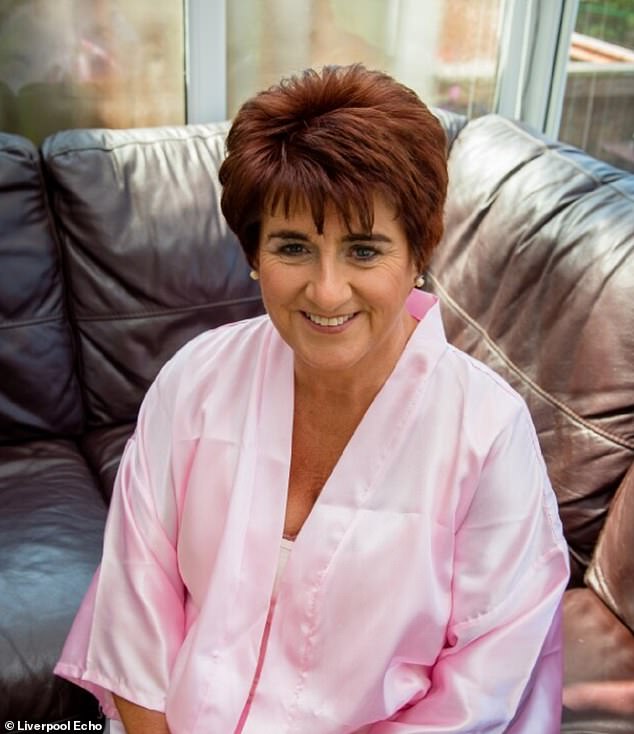 June Anderson, who was a carer, died at Aintree Hospital after contracting Covid-19

The neonatologist, known to his friends as Vish, was the ‘clinical lead’ for regional neonatal work.

His wife, Liza, thanked Worcestershire Royal Hospital staff for their ‘kindness, compassion and care’ towards her husband.

She said: ‘We’re devastated at losing our beloved Vish. He was such a loving husband and father to our beautiful daughter Katelyn, and much loved son and brother to our family in Malaysia and Trinidad.

‘His whole family meant the world to him, and he absolutely doted on Katelyn.

‘Vish loved his work; to him it was so much more than a job and his colleagues are part of our family too.

‘He treated every patient and family he cared for as his own. I couldn’t have been prouder of him.

‘I would like to thank the staff at Worcestershire Royal Hospital for the kindness, compassion and the care that they have provided to us over an incredibly difficult past few weeks.’ 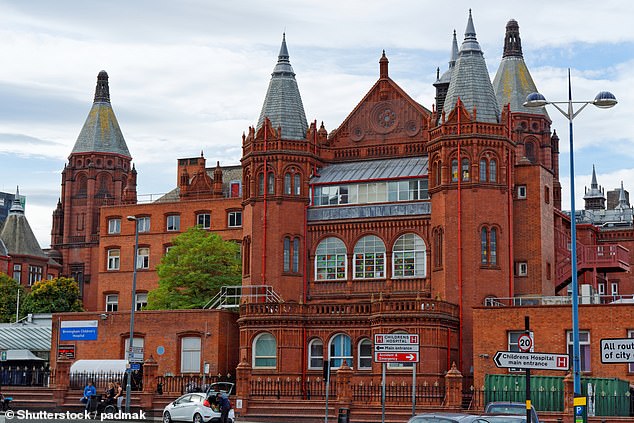 The married father, known by his friends as Vish, worked at Birmingham Women’s and Children’s NHS Foundation Trust and was described by colleagues as an ‘amazing doctor’

Paying tribute to Dr Rasiah, Sarah-Jane Marsh, chief executive of the trust, said: ‘Vish was an amazing doctor, leader, colleague and friend, passionate about the care of babies and their families.

‘Losing him in such a cruel and unfair way will be too much to bear for many of us, in particular anyone involved in neonatal care, and of course his beautiful wife and daughter.

‘As our tears flow, we must always remember the values that Vish stood for, and hold his vision, courage and compassion in our hearts. God bless you Vish, and may you rest in peace.’

Dr Fiona Reynolds, medical director at the trust, said: ‘It’s heart-breaking that we have lost someone as talented, dedicated and respected as Vish.

‘His loss will not only be felt by his friends and colleagues at our hospital, but by many across the Midlands who worked alongside him for so long.

‘Vish touched the lives of many families during his time as a neonatal consultant in Birmingham, and will be sadly missed.’

The mother-of-two was only allowed to have her sister with her during her final moments, where the grandmother of three asked to see photographs of her young grandchildren.

Mrs Anderson had been in self-isolation for two weeks at home having tested positive for Covid-19. She was allowed to return to work but went back into isolation after developing a cough. Her condition started to deteriorate.

Her son Graeme Anderson told the Liverpool Echo: ‘She loved family parties, in particular her annual Christmas night out with family and friends.

‘She was extremely house proud and took great pride in her garden; she loved nothing more than having family and friends round for barbecues and a few gin and tonics.

‘I spoke to my mum on the phone every day. I’m going to miss those phone calls and days out with the children the most.’ 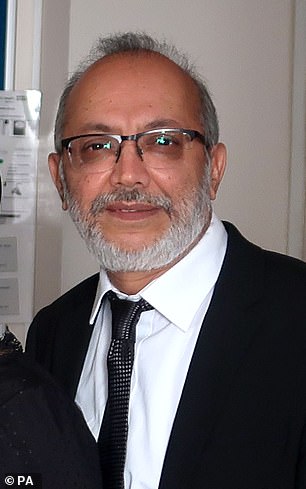 Meanwhile, colleagues of London GP Dr Yusuf Patel have praised the ‘wonderful and gentle’ medic who died of suspected coronavirus on Monday.

Father-of-three Dr Yusuf Patel, 61, founded Woodgrange Medical Practice in Newham, east London, where he worked as GP for over two decades before he passed away at Queen’s Hospital in Romford.

He leaves behind his wife, Nasim, and his children Rumaysa, Maariya and Ahmed, who are all pursuing medical careers, according to Woodgrange Medical Practice.

Dr Patel’s colleagues there have remembered him as a ‘simple, humble and honest man’ who was ‘the life and soul of any party.’

In a statement, the practice said: ‘He was a simple, humble, honest man with no extravagances in life.

‘He was the life and soul of any party and great fun to be with.

‘Yet he set an example for all of us with his drive and enthusiasm to achieve the highest standards.

‘He touched thousands of lives with his kindness, generosity and sincerity, serving the local community in Newham.’

Dr Patel was also a member of NHS Newham Clinical Commissioning Group (CCG), and he was Vice Chair of the borough’s GP federation, Newham Healthcare Collaborative, from its inception in 2017.

A statement from the trust said: ‘Above all else, he was a selfless man who loved his patients and was popular and respected among his peers.’

‘Dr Yusuf Patel was a wonderful and gentle human being and an excellent GP.

‘He had dedicated his life to look after the patients in the East End.

‘We shared many common patients and he was always supportive of my clinical work and practice. I will miss him.’ 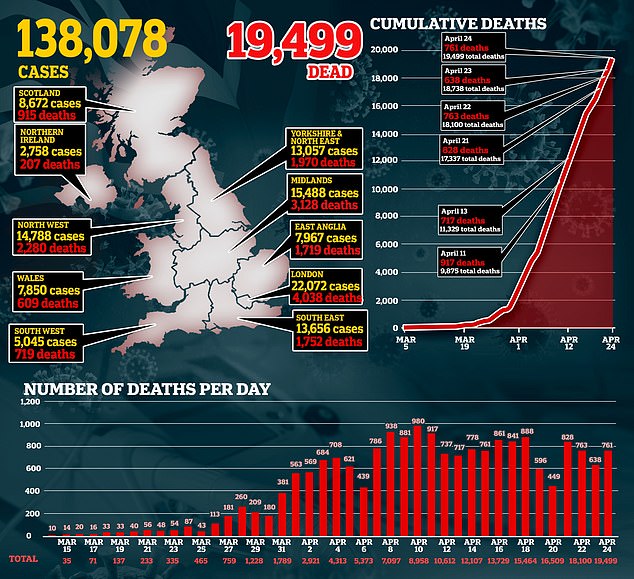