A nurse who worked at a Wuhan hospital designated to treat coronavirus patients has died after falling from heights.

The cardiac nurse was said to have quarrelled with a supervisor before the incident earlier today.

The deceased medic had complained about a shortage of personal protective equipment (PPE) for hospital workers in the isolation wards, according to state-owned news outlet The Paper.

It comes as multiple medics in Russia have plunged to their deaths after complaining about a lack of PPE and being forced to work despite being infected.

The Wuhan Xiehe Hospital was appointed to treat coronavirus patients at the height of the COVID-19 outbreak in the former epicentre. The file picture taken on March 18 shows a patient being transferred at the fever clinic of Xiehe Hospital in Wuhan, Hubei province of China 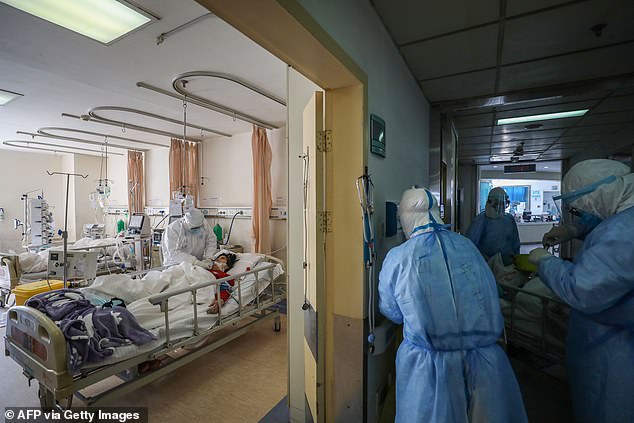 The Wuhan Xiehe Hospital, where the medic worked, has confirmed the incident and said that they were investigating the cause.

The Chinese nurse, whose gender was not specified, was pronounced dead by the Wuhan hospital after all treatment failed, according to an official statement.

The Wuhan hospital had been appointed to treat coronavirus patients at the height of the COVID-19 outbreak in the former epicentre.

The incident occurred around 10:45am local time on Wednesday at the Wuhan Xiehe Hospital.

A spokesperson from the Wuhan hospital confirmed the nurse’s fall to Chinese media.

‘We are currently looking into this matter,’ he told The Paper. We will release a public announcement later.’ 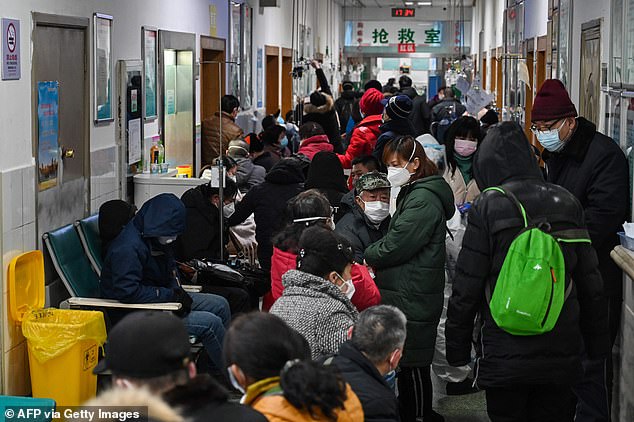 The unnamed cardiac nurse was said to have been quarrelling with a matron over a lack of protective gears for hospital workers in the isolation wards. The picture from January 25 shows mask-donning Wuhan residents queuing for medical attention at Wuhan Red Cross Hospital 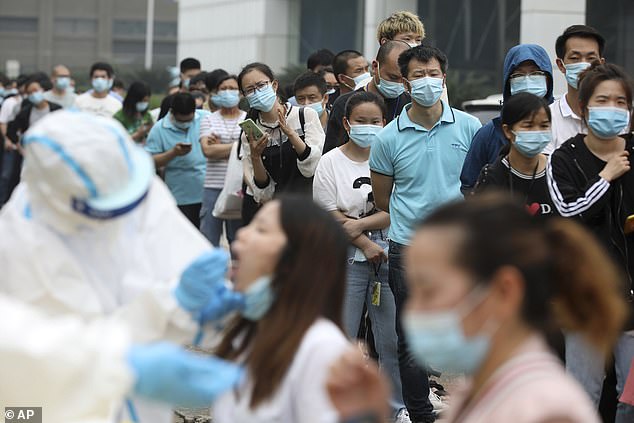 The former epicentre has appeared to have contained the coronavirus outbreak since June. In this file photo taken on May 15, people line up for coronavirus testing at a large factory in Wuhan as part of a campaign to test all 11 million residents of the central Chinese city

Screenshots released by Chinese media allegedly shows a social media post made by the deceased medical worker, who complained about having a lack of protective gears while working in the isolation wards.

The post said that the nurses were forced to spend at least eight hours every day in the isolation wards without donning sufficient protective equipment.

They were allegedly forbidden from eating, drinking water or even using the bathroom during the long shift, according to the online account.

The social media post was allegedly uploaded in late January when the central Chinese city imposed a strict lockdown on its 11million residents after the coronavirus outbreak erupted.

The former epicentre has appeared to have contained the coronavirus outbreak since June. 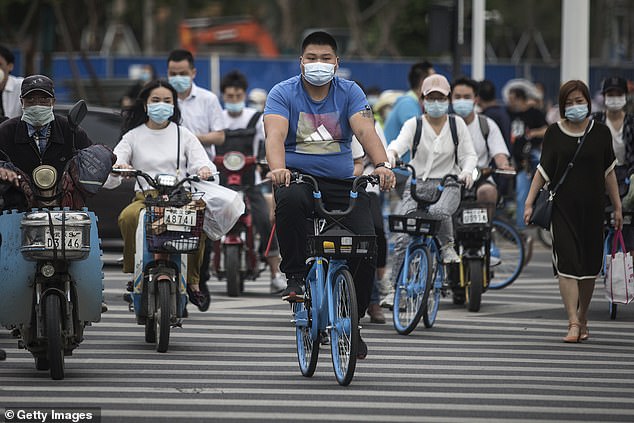 The file picture taken on May 11 shows Wuhan residents wearing face masks while riding their bicycles. The government lifted the draconian lockdown on the former COVID-19 epicentre

The news comes as three medics in Russia have plunged from hospital windows after complaining about a lack of PPE and being forced to work despite being infected.

Two senior women doctors in Russia died after falling from hospital windows amid reports they had challenged their superiors over a lack of PPE for coronavirus patients.

A third doctor, Alexander Shulepov, 37, was left fighting for his life with head injuries after taking part in in a video which claimed he was ordered to work despite testing positive for COVID-19.

China – where the global outbreak first emerged – had largely brought domestic transmission under control through targeted lockdowns, travel restrictions and testing. But sporadic regional outbreaks have illustrated the difficulty of keeping the virus at bay.

The authorities registered a total of 98 domestic infections, among which 89 were found in Xinjiang, home to the country’s most Uighur ethnic minority.

In total, 84,060 people have been infected with coronavirus in China, of whom 482 remain hospitalised. There have been 4,634 related deaths, according to an official count.