Shocking footage has revealed how gowns designed to protect against coronavirus have been falling apart as nurses at one French hospital tried to put them on.

Staff at a children’s hospital in Marseille filmed themselves attempting to dress in the gowns on Sunday, only for the material to disintegrate in their hands.

The videos began circulating on social media just hours before the country posted its largest daily death toll – with 833 confirmed dead from the virus on Monday. 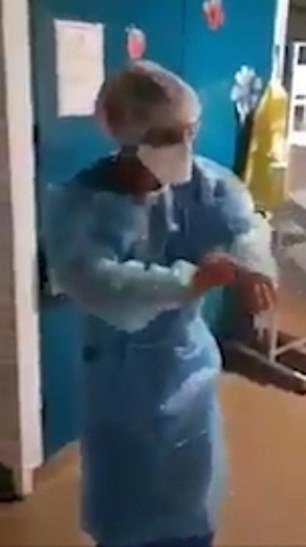 France is now among the worst-affected nations in Europe, after Spain and Italy both started reporting falling infection rates and death totals.

Marseille health officials said it appears the gowns – which came from France’s national stockpile – had degraded after not being stored properly.

In one of the videos, which was initially published to a staff chat group before being leaked, nurses can be seen taking gowns out of a box in a hospital corridor.

‘Be careful, we received the new blouses, the Americans didn’t want them on the tarmac,’ she says, in reference to another story about the US buying protective supplies before France could receive them.

‘I take it delicately, you never know what’s going to happen, and hello, hello, my hand has gone through.

‘This is how I will get into a COVID room,’ she adds.

A second, similar video, shows a pile of torn coats on the floor as one nurse attempts to put another one on.

‘The new blouses are tearing, it’s normal,’ she says, before adding: ‘This is the third box.’

A spokesman for Public Assistance – Hospitals of Marseille, which controls hospitals in the region, said an immediate investigation into the gowns was carried out. 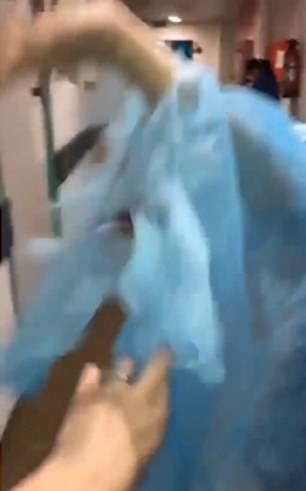 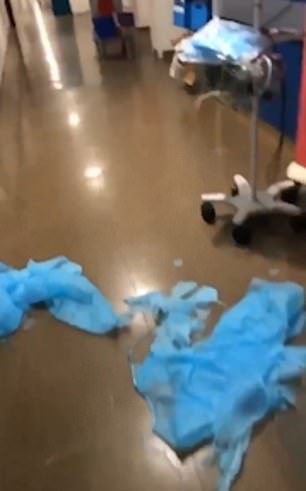 Staff at the hospital said at least three boxes of protective equipment they were sent turned out to be faulty (left, a gown rips as a medic puts it on, and right a pile of ripped gowns)

The official told French station 20 Minutes that the probe had concluded the gowns degraded after being stored in a ‘too humid environment’, with evidence of water damage on the boxes.

They denied that the supplies had been bought recently from China, saying they were part of France’s national stockpile that was put together before the coronavirus crisis began.

Of 20,400 gowns distributed that day, around 300 were found to be defective, officials added.

Audrey Jolibois, head of a local medical worker’s union, said: ‘We are told that this is an isolated case.

‘For now, we want to believe them. Now, we remain very vigilant that this does not happen again.’

France has suffered a total of 8,911 coronavirus deaths, the third highest total in Europe after Italy and Spain.

But while authorities in Rome and Madrid have announced that they have passed the peak of infection, those in Paris admit the crisis will keep getting worse. 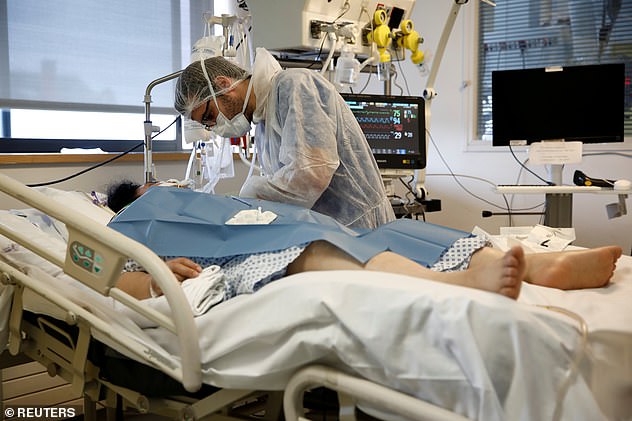 France is now one of the hardest-hit countries in Europe with coronavirus, after recording 833 deaths on Monday alone – the largest single-day rise so far (pictured, a patient in Paris) 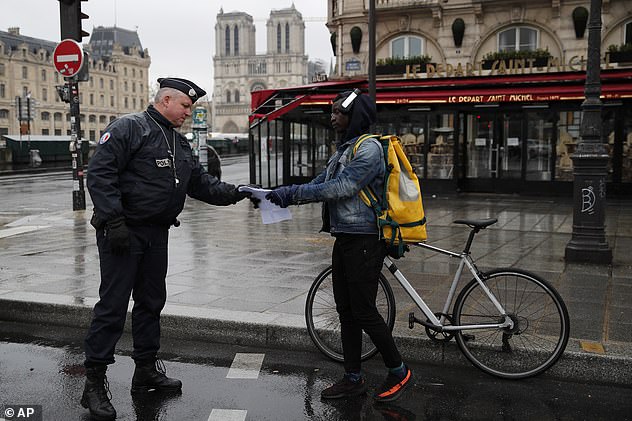 French Police officer checks the authorization at ‘Saint Michel near Notre Dame during a nationwide confinement to counter the Covid-19, in Paris, Monday

‘We have not reached the end of the ascent of this epidemic,’ Health Minster Olivier Veran said on Monday.

‘It is not over. Far from that. The path is long. The figures that I have announced show this,’ he said. ‘Stay at home and continue this confinement effort.’

France has been under nationwide lockdown since March 17.

The total number of cases, combining hospital and nursing home statistics, increased by 5,171 over the last 24 hours to 98,010.

Giving a glimmer of hope, Veran added that the rate at which new infections is being reported is also falling – which is key to easing pressure on health services.

Veran said that rate is now falling towards 1 in most French regions, and had dipped below it in several places.

A figure below 1 means the virus has effectively stopped circulating and will begin to die off.

‘We see that the confinement has a palpable impact. In France we are beginning to feel it,’ he said.