More than a dozen new care home deaths were reported yesterday – as tributes were paid to the first named carer suspected to have died of coronavirus.

A single care home in Liverpool has now lost nine residents, with two more in a critical condition in hospital and one staff member testing positive for the virus.

This means there have now been nearly 50 Covidrelated deaths in UK care homes – but the lack of testing means it is impossible to know the true scale of the crisis.

At the weekend, three major care home firms told the Daily Mail that no staff or residents had been tested despite witnessing a spate of deaths.

An elderly man in wheelchair at window in residential home

At the Oak Springs Care Home in Wavertree, three residents died at the weekend, with one of them testing positive for the virus, raising the death toll to nine since the outbreak of the pandemic.

Home manager Andrea Lyon said: ‘We are battling on and I can’t praise my team highly enough. They are under great strain.’

Last night Liverpool Wavertree MP Paula Barker said: ‘Social care staff must be treated the same as NHS workers, the residents of these care homes must be tested and the Government must come up with a national strategy for our care homes.’

In Portsmouth, four elderly residents at Harry Sotnick House have died after showing Covid-19 symptoms and a fifth died without symptoms.

As Nicola Sturgeon revealed a care worker in Scotland had died with the virus, tributes were paid to Carol Jamabo, pictured, the first known care worker to have died.

The mother-of-two, 56, worked for Cherish Elderly Care in Bury, Greater Manchester, but became ill around a week before her death last Wednesday, her family said.

Her condition deteriorated so quickly that she was alone when she died at Salford Royal Hospital.

Nephew Dakuro Fiberesima, from Purfleet, Essex, said: ‘She was just an amazing aunt.

She was a funloving person with many friends and will be remembered for her uplifting, joyful personality.’ 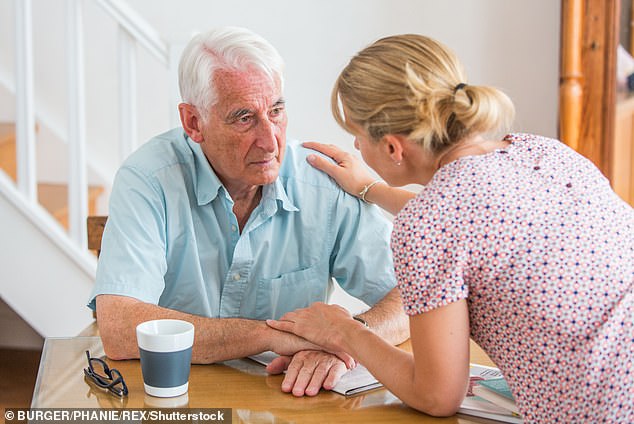 STOCK IMAGE: An elderly man in a care home is comforted by a carer

Elderly told: Say no to hospital

Elderly patients are being pressured into refusing hospital treatment under ‘shameful and discriminatory’ blanket guidelines, leading charities have warned.

Dozens of care homes have been told to check that vulnerable patients have signed Do Not Resuscitate orders and warned that going to hospital was ‘undesirable’ if they got coronavirus.

But campaigners say this means elderly patients who are mostly fit and well could be denied potentially lifesaving treatment if they get coronavirus, potentially breaching their human rights.

Yesterday a group of organisations issued a joint statement saying that thousands of older patients had been left believing ‘their lives and wishes do not matter’.