Nursing student given small chance of survival for sepsis

A young woman given only a 15 per cent chance of survival after doctors failed to spot sepsis is now training as a nurse to use her experience to help to save lives.

Katie Dutton, 27, had been admitted to hospital with a kidney infection when an intravenous line became infected.

Her temperature reached 40.1C (104F) and her parents were told to prepare for the worst.

She was treated with powerful antibiotics and incredibly, went on to make a full recovery.

Miss Dutton is now in her first year training to be a nurse at De Montfort University in Leicester, where she has organised an awareness day for fellow students to find out more about the condition.

Katie Dutton, 27, had been admitted to hospital with a kidney infection when an intravenous line became infected

But it is notoriously difficult to spot because symptoms can be confused with less serious conditions. The Daily Mail’s End The Sepsis Scandal campaign has led to major improvements in how the NHS deals with the illness.

Miss Dutton hopes her event, organised with friend Kylie-Ann Johnson and with the support of Leicester Royal Infirmary’s A&E sepsis team, will help alert other nurses to the signs.

‘I was determined not to let this beat me and to make an example of it and make sure we’re lowering the number of sepsis cases,’ she said.

‘I wanted to help stop that happening to other patients, and hopefully inspire nurses to really read up about sepsis and to have it at the forefront of their mind.

‘Student nurses are the fresh faces of the NHS. They are the ones going out into the hospitals and they have to be confident going out into practice and being able to recognise it.’

Miss Dutton contracted sepsis two years ago after being admitted to hospital with a kidney infection.

She contracted MRSA in hospital after a line was left in too long, which led to sepsis but the signs were not spotted quickly enough by medical staff, she said.

‘Within a week, I started to hallucinate. I didn’t know where I was and my temperature was 40.1C,’ she said. 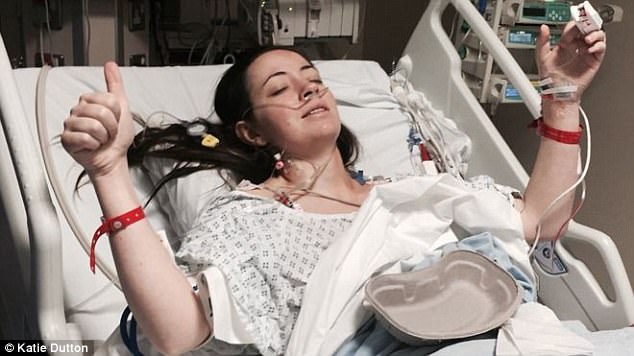 Her temperature reached 40.1C (104F) and her parents were told to prepare for the worst. She was treated with powerful antibiotics and incredibly, went on to make a full recovery

Miss Dutton added: ‘It was a horrific experience and being a student nurse I understand how understaffed the hospitals are currently and how mistakes can be made.

‘I hope that we can change things and help make an example for future nurses.’

More than 100 nurses attended the event about sepsis, which is known as the ‘silent killer’ because symptoms develop so quickly.

In the early stages, sepsis can be mistaken for a chest infection, flu or an upset stomach.

It is treatable with antibiotics and fluids, but these must be given very early on to prevent serious complications. 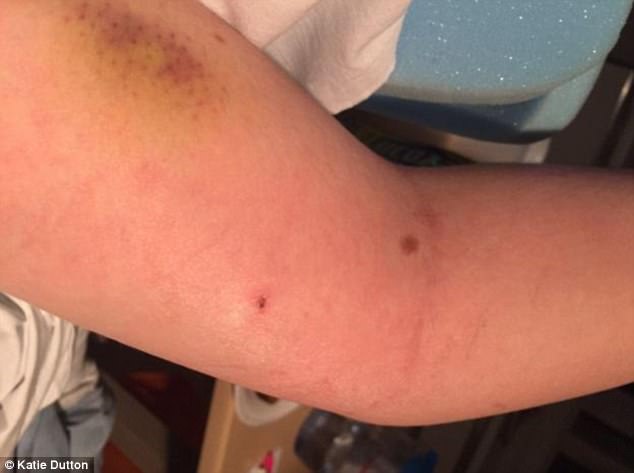 Miss Dutton is now in her first year training to be a nurse at De Montfort University in Leicester, where she has organised an awareness day for students to find out more about the condition (picture of her arm, which swelled up in hospital)

Signs of sepsis include slurred speech, extreme shivering, muscle pain and breathlessness. Anyone with any of these symptoms should seek medical help urgently.

The Daily Mail’s sepsis campaign was triggered by the death of 12-month-old William Mead in 2014, who died after call handlers at the NHS 111 helpline had failed to realise he needed urgent help.

The University Hospitals of Leicester Trust was the first in the country to bring in a dedicated sepsis team to support medics on wards.

Sepsis nurse Clair Ripley was at the awareness event to talk to the students about the steps they advise to speed up diagnosis.

She said: ‘Katie’s event is vital for sepsis care. I think it’s fantastic what she has managed to achieve and the response from students has been so good.

‘Her colleagues are the nurses of tomorrow so it’s vital we tap into them as a resource and it becomes second nature to them to ask the question: could it be sepsis?’

So many trainee nurses applied to attend the sepsis recognition event that there was not enough space, so a second event is being planed for later this year.

Miss Johnson, who helped organise it, said: ‘Originally, it was just going to be an event for our cohort, but then things spiralled and we had more than 210 people apply to come.

‘We’re hoping this can become a regular event at DMU and that student nurses feel much more confident now about spotting the signs and raising any issues.’