For those of us susceptible to irritable bowel syndrome symptoms, the Christmas period can be an uncomfortable time of year.

Symptoms can include bloating, burping, feeling full, cramping and nausea – all things we don’t want to have to deal this Christmas.

There is no cure for the condition, believed to strike up to 15 per cent of people, according to global estimates.

But here, in a piece for Healthista, London-based nutritionist Rick Hay reveals five ways you can alleviate some of your agonising symptoms.

Christmas can be a time when IBS flare-ups occur. But according to London-based nutritionist Rick Hay, you can try and ease symptoms while still enjoying treats

1. Stock up on soothing herbs and teas

One of the easiest ways you can help alleviate bloating and IBS symptoms when they strike is by introducing soothing herbs and teas into your everyday diet.

Antispasmodic herbs such as aloe vera, chamomile and peppermint are smooth muscle relaxants that will help to reduce cramping symptoms.

A 2013 study in the Journal of Research in Medical Sciences found that herbal agents can be used for symptom control when effective therapies are still lacking.

The study saw 33 participants who suffered from IBS symptoms, drink 30ml aloe vera juice twice a day for eight weeks. In conclusion, aloe vera was shown to reduce abdominal pain and discomfort, as well as flatulence in IBS participants.

Mr Hay advises having a herbal camomile tea before bed to help aid digestion and reduce symptoms of bloating overnight.

A 2015 study researching the impact of Chamomile extract on IBS symptoms also found that none of the currently available drugs are globally effective in treating all IBS symptoms. 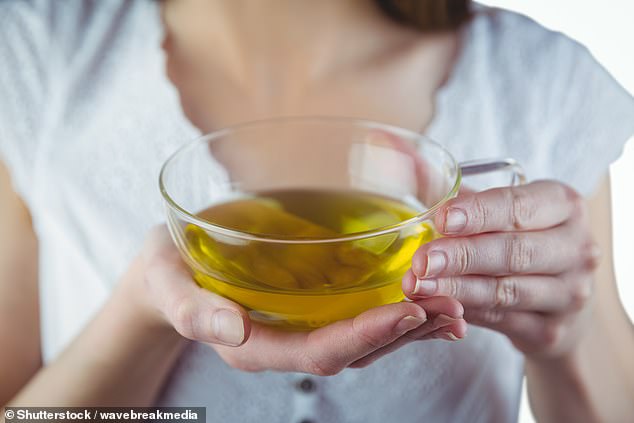 Introducing soothing teas, such as camomile, peppermint and aloe vera into the diet can alleviate symptoms of IBS, studies have found

WHAT IS IRRITABLE BOWEL SYNDROME?

Most sufferers complain of:

There is no known cause for IBS.

Many people with IBS find that their symptoms can be affected by their diet, and their emotions, especially stress.

Studies suggest it could be caused by spasms in the colon.

IBS can affect people of any age.

But it seems to be more common in young people.

Women are most commonly affected, with 60 percent of IBS sufferers female, compared to 40 percent male.

There is no cure for the condition, believed to strike up to 15 per cent of people, according to global estimates.

Those taking the camomile found their IBS symptoms significantly reduced. It claimed that that the improving effects of camomile on all IBS symptoms shows it may have a positive effect on the development of IBS, too.

The NHS recommends peppermint oil as a non-prescription supplement, shown to be better at easing symptoms than prescribed muscle relaxants or fibre.

Additionally, taking turmeric as a supplement or adding it to food may also help with IBS symptoms.

A 2013 review of research on turmeric published in the World Journal of Gastroenterology concluded that turmeric is a ‘very promising new therapeutic option for the treatment of gastrointestinal diseases.’

Food is a common trigger for digestive problems and IBS symptoms.

Restricting certain foods could dramatically improve these symptoms in some people.

A diet low in fermentable carbs known as a ‘low FODMAP diet’ is clinically recommended for the management of Irritable Bowel Syndrome (IBS) or other types of bloating discomfort and there is a large body of scientific evidence showing it can really help.

These scientific terms are used to classify groups of carbohydrates that are known to trigger digestive symptoms like bloating, gas, stomach pain and other common symptoms found in IBS sufferers.

Mr Hay said: ‘Food such as onions, lentils, rye, cabbage, broccoli, Brussels sprouts, beans and dried fruits are all high in FODMAPS and so are poorly absorbed by the gut. As a result they pass through and into the colon where they are fermented by bacteria.

‘This leads to excess gas being produced that causes cramping, bloating, wind and pain.’

Unfortunately, FODMAPS are found in a large number of everyday foods including oats, and many fruit and vegetables, including broccoli and cauliflower. 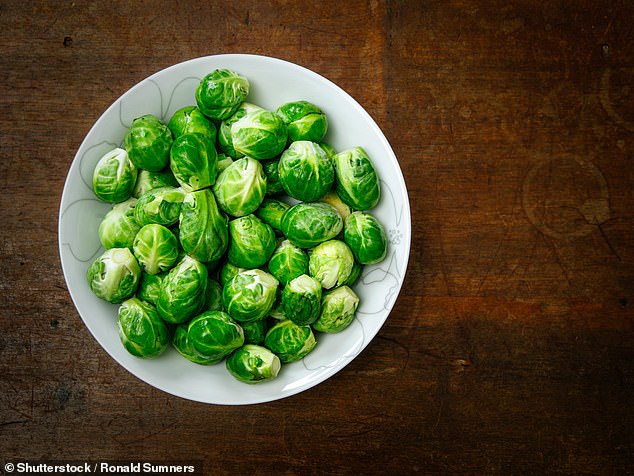 Mr Hay said: ‘Food such as onions, lentils, rye, cabbage, broccoli, Brussels sprouts, beans and dried fruits are all high in FODMAPS and so are poorly absorbed by the gut’

That means the diet can be difficult to stick to, even if it means alleviating your symptoms.

A 2016 study published in the journal Gastroenterology and Hepatology, indicates that restriction of FODMAP foods is an effective dietary intervention for reducing IBS symptoms.

The randomized controlled trial found that a low FODMAP diet as well as taking probiotics had significantly improved IBS symptoms compared to those eating a normal diet.

‘Those who eat more high-FODMAP high foods have demonstrated prolonged hydrogen production in the intestine and colonic distension by fermentation,’ the authors said. ‘This has led to gas, bloating and stomach discomfort.’

You may be running at one hundred miles per hour, trying to fit everything in before Christmas arrives.

But Mr Hay warns that you really shouldn’t overdo it in any sense, from over-training to over-stressing because it’s bad news for your gut.

It turns out IBS could also be worsened by your mental health – in a 2014 review in the World Journal of Gastroenterology authors said: ‘More and more clinical and experimental evidence has showed that IBS is a combination of irritable bowel and irritable brain.’

Stress is considered a key cause of IBS symptoms, suggesting whatever is going on in your mind could be having a direct impact on your gut health. 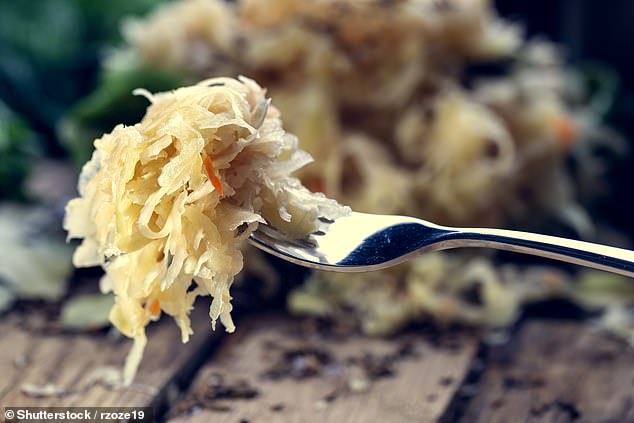 Probiotic yeasts and cultures occur naturally in fermented foods such as sauerkraut (pictured), kimchi and kefir, and are also sold as supplements. They are good for the gut bacteria

Probiotics are live bacteria and yeasts that are said to provide various health benefits.

Often described as ‘good’ or ‘friendly’ bacteria, they’re usually found in yoghurts or taken as supplements.

Probiotics have been known to positively influence the balance of our microbiota (gut bacteria).

LAB 4 probiotics have been shown to reduce the severity and duration of abdominal pain and bloating, whilst improving the quality of life in those who suffer from IBS symptoms.

A clinical trial that looked into the efficacy of probiotics in alleviating the symptoms of IBS over an eight week intervention period, found a significant improvement in symptoms as measured by the IBS Symptom Severity Score system used by doctors.

Digestive enzymes are substances produced by our bodies that help us digest and break down the foods we eat.

Having all of our digestive enzymes working correctly is essential to healthy digestion and ensures the optimal absorption of nutrients from our food.

These enzymes help break down large macromolecules like proteins that are in the foods we eat into smaller molecules that our digestive system can then absorb.

Sometimes it can be hard to keep up your good habits, meaning your digestive enzymes could be compromised.

Supplementation with digestive enzymes may therefore give you an extra boost.

A 2018 study found that deficiency in digestive enzymes is believed to be one of the contributing factors for those who suffer from functional dyspepsia.

This is a term used to describe a group of symptoms affecting the gastrointestinal tract, including stomach pain or discomfort, nausea, bloating and belching.

Other studies have suggested that supplementation with enzymes is beneficial for reducing symptoms of flatulence, bloating, belching and fullness. 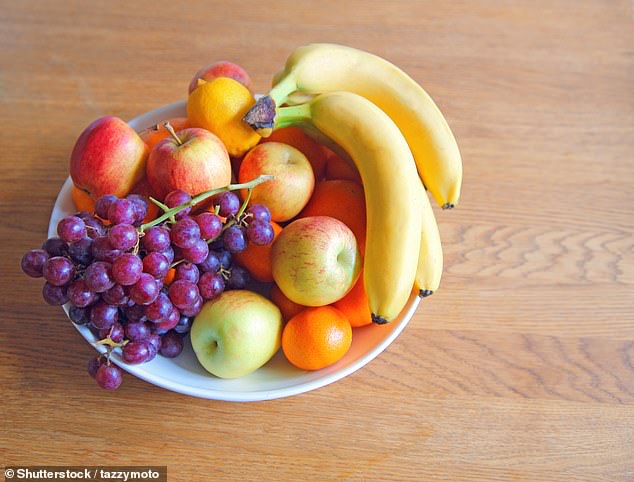 Fruits such as kiwi, papaya, pineapple and bananas are high in digestive enzymes which are substances produced by our bodies that help us digest and break down the foods we eat

For example, lipase (produced by the gut) supports the conversion of fat into fatty acids and cholesterol, and amylase (also in the gut) is used in transforming carbohydrates into simple sugars.

If your body falters in producing any of these enzymes, the corresponding nutrients may not be absorbed as efficiently, which might impair digestion and lead to bloating and symptoms of IBS.

While our body creates digestive enzymes in its saliva, pancreas and gut (small intestine) they can also be found in certain foods and supplements which can help the process of digestion along.

Some fruits and vegetables are excellent natural sources of digestive enzymes including kiwi, papaya, pineapple, bananas, avocado, mangoes and pineapple.

Apple cider vinegar, sauerkraut, kimchi, miso, kefir, yoghurt and honey can help too as they are also rich in digestive enzymes.

This article was originally published on Healthista and reproduced with its permission.