Nutrition gurus have revealed the foods you should be eating at work to stay in shape and not feel sluggish – and luckily they don’t involve meal-prepping.

Britons work more hours than anyone else in Europe, spending an average of 42 hours and 18 minutes a week at the office, according to surveys.

Many simply don’t have the time – or the patience – to pre-cook their meals and bring them in every week.

But luckily, three nutritionists and personal trainers claim not everyone needs to be a ‘meal-prep maven’.

They say you can stay perfectly healthy eating foods from the high street and canteen – despite what conflicting nutritional advice online may say.

The experts also reveal which foods stop you from crashing and which treats are the safest to snack on.

Research this week in France found employees who juggle a demanding 10 hour work schedule every day for at least a decade are 45 per cent more likely to suffer a stroke.

‘There are some surprisingly good ready-to-go lunch options available on the high street today,’ says Kim Pearson, a former weight loss expert on ITV’s This Morning.

She advises choosing a protein-rich salad from Pret A Manger and recommended the Crayfish and Avocado Salad – which is only 383 calories – or the Tuna Nicosia Salad, which is slightly higher at 423 calories.

‘Japanese high street chains offer sashimi with seaweed salad and edamame beans, which is a good alternative,’ according to the nutritionist, who runs her own clinic in London.

She added: ‘Complete your meal with pack of mixed, unroasted nuts and an apple or a pot of berries.

‘But avoid meals stuffed with rice, cous cous and noodles.

‘If you can get to a supermarket on your lunch break, pick up some pre-cooked smoked salmon, king prawns, hard boiled eggs or sliced organic meat and combine them with a ready made salad pot.’

What should I snack on at my desk?

We are a nation of snackers. But we weren’t designed to continuously graze throughout the day and it’s a good idea to give the digestive system a rest, according to Ms Pearson. 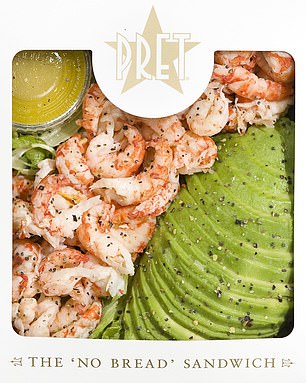 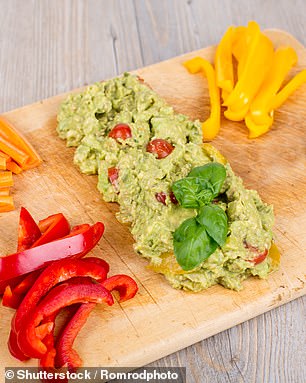 The nutritionist recommended Pret A Manger’s Crayfish and Avocado Salad (pictured left) which contains 383 calories. She suggested having guacamole with chopped vegetables as a snack (right)

But if you do have long gaps between meals or need to stay in the office late, the nutritionist has offered some options:

We Brits are in the habit of eating starchy carbs from the minute we wake up. For many, the average day begins with toast for breakfast and sandwiches for lunch.

Ms Pearson says this causes a short-lived energy boost followed by a blood sugar dip that’s likely to cause an energy crash later on.

She advises cutting out the starchy carbs and replacing them with as much vegetables as you fancy.

‘The more vegetables you eat, the less room there is for starchy, refined carbohydrates,’ she says. 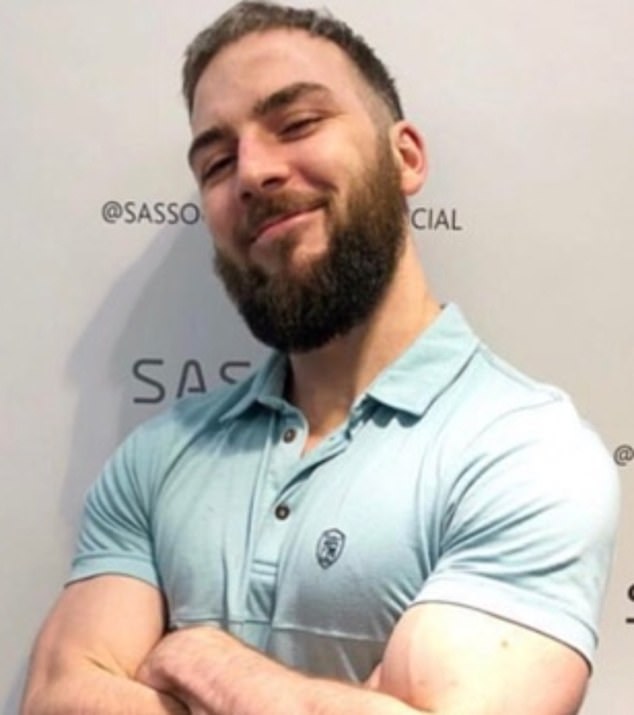 Jamie Corkindale recommends a baked potato, wraps or a low-cal ready -+meal from the supermarket

‘Pick up a frozen baked potato from the shop on your break and microwave it’, says Jamie Corkindale, who runs a no-nonsense personal training and fat loss programme in Glasgow.

He added: ‘Potatoes are the most satiating of all foods and a large baked potato is little more than 200 calories.

‘There’s a common misconception they are bad for you, which is totally rubbish.

‘Pair your potato with a can of tuna or pre-cooked ham or chicken, which can all be bought from your local shop.

‘If you avoid mayo, that meal will only come to 380-or-so calories, and will keep you full all day.’

Another easy meal to make in the kitchen at your work is tortillas, the qualified nutritionist said.

He advises purchasing a packet of small wraps, some pre-cooked meat or fish and a salad bowl.

Mr Corkindale claims there are a range of  ‘amazing low-calorie ready meals’ on supermarket shelves these days.

He said his go-to options are M&S’s Thai Green Curry (380 calories) or Tesco’s Salmon in Watercress Sauce with Potatoes (297 calories).

A Friday cheat meal is something most Brits look forward to as the highlight of their week.

But we must not turn a cheat meal into an entire cheat day, according to Mr Corkindale.

He said: ‘Stop undoing all of your hard work on a Friday. Too many people have an entire cheat day, where they have a fry up for breakfast, fish and chips for lunch and a takeaway at night.

‘If you have a fatty meal for lunch as a little treat, make sure you don’t go home and have a Chinese too.

‘You’ll save yourself hundreds – if not thousands – of calories that you spent all week avoiding.’ 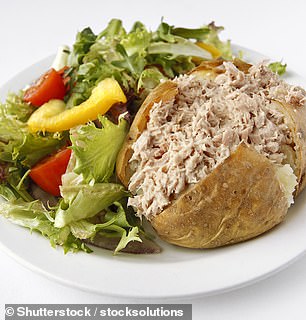 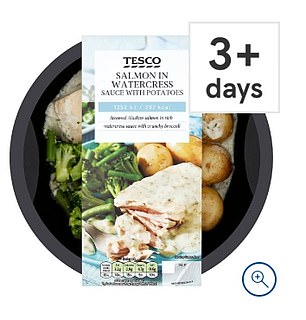 For lunch, the personal trainer advised having a baked potato with tuna and salad (left) or a low-calorie ready meal such as Tesco’s Salmon in Watercress Sauce with Potatoes (right)

The truths about breakfast

‘Despite what you may think, breakfast isn’t the be all and end all and it’s not the most important meal of the day for everyone,’ the personal trainer says.

‘Have a coffee or a tea in this time to suppress your appetite a little. Don’t be afraid to have a sugar in them either, as there’s only 16 calories per teaspoon.’

Mr Corkindale noted that, for some people, breakfast is crucial. 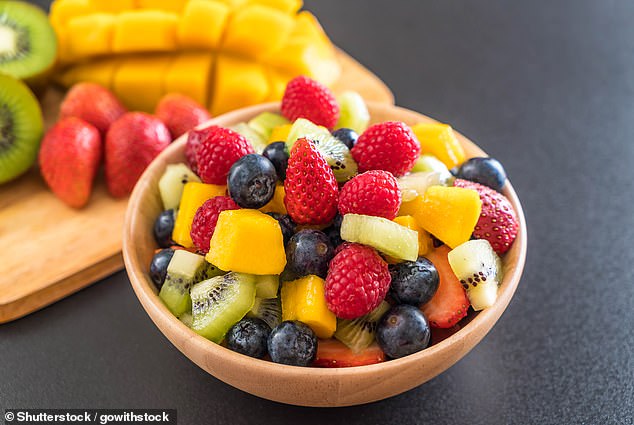 The personal trainer, from Glasgow, recommends a big bowl of fruit in the morning for those who struggle to fast

To those who can’t go without it, he recommended a big bowl of fruit or a bowl of porridge.

He added: ‘Both are slow release and will keep you full until lunch time. But watch your portion size with the porridge as it is quite calorie dense.

‘If you don’t have time to make a fruit bowl, have an entire packet of blueberries or strawberries as they’re extremely low in calories.’ 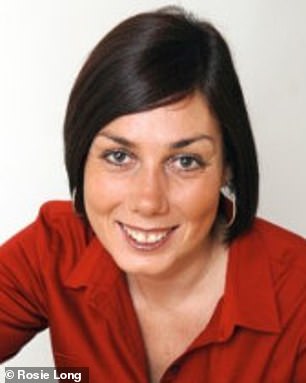 Many of us are guilty of reaching for quick, sugary fixes when we’re feeling peckish on-the-go or at work.

But sweet snacks such as chocolate, muffins or biscuits only provide a short-term burst of energy and lead to a sugar crash soon after eating them, says nutritionist Juliette Kellow.

She added: ‘Opt for smarter, more nutrient-dense snacks such as oatcakes, wholegrain toast, whole fruit or a handful of unsalted nuts such as almonds.

‘Foods that contain fibre slow down the release of sugar into the blood stream providing more long-lasting energy to avoid the dreaded sugar crash.

‘They’re essential in reducing tiredness and fatigue, which can often hit post-lunch.’

‘My go-to “meal deal” is a simple sandwich or roll on wholegrain bread filled with lean protein and salad,’ the registered dietitian said.

Ham, prawn, chicken and tuna salad sandwiches are all available in most supermarkets and contain around 350 calories. 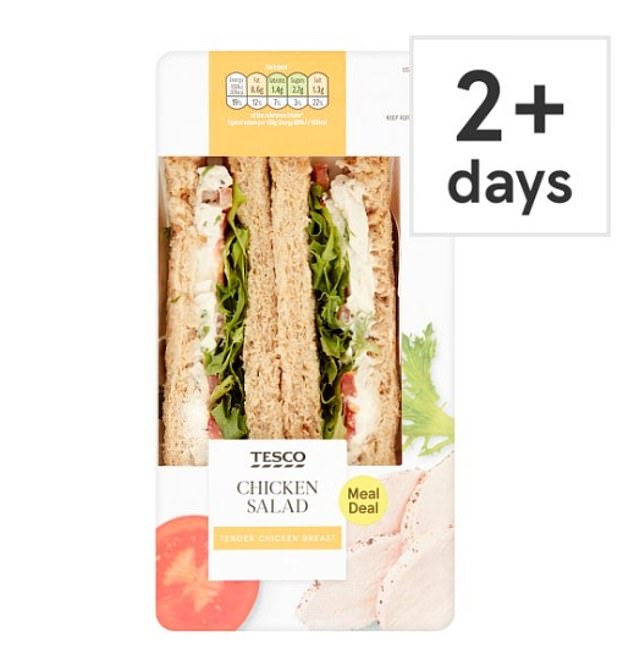 She advised teaming the sandwich with a bag of carrot sticks, some cherry tomatoes or a piece of fruit and a handful of nuts for a complete meal.

‘The veg or fruit counts towards one of your 5-a-day and contains vitamin C, which helps the body absorb the iron from the nuts,’ she added.

Keep fuss-free snacks in your drawer

Snacking often has a bad reputation as it’s often associated with unhealthy foods that are high in sugar, salt and fat.

When work get busy, it’s easy to reach for a bag of crisps or a chocolate bar to keep us satisfied between meals.

But these foods lack nutrients and don’t keep us satisfied for very long, with the result that we end up reaching for another snack soon after, according to Ms Kellow.

She added: ‘Keep simple, fuss-free snacks in your office such as a bowl of fruit, a packet of oatcakes or wholegrain crackers with individual portions of reduced-fat cheese or cheese spread.

‘Spreading food intake out throughout the day will generally help to even out blood sugar levels, preventing the dips that can leave us “hangry” and making poor food choices.

‘A bag of unsalted nuts such as almonds, which you can dip into, or pick up some pre-cut carrot sticks and hummus on your way to the office.

‘We don’t all have to be “meal-prep mavens” in order to eat healthily – it really isn’t that complicated.’