A jury convicted Raniere in June last year on all counts of sex-trafficking and coercing women into sex. Some plaintiffs claim they were recruited as sex slaves and were forced to have Raniere’s initials branded on their bodies.

He and his lawyers filed a motion in March, arguing that two witnesses perjured themselves when they denied they were planning to sue him after the trial.

But Judge Nicholas Garaufis of Brooklyn federal court ruled Friday that Raniere is not entitled to a new trial because he did not prove that any of the testimony was actually false.

Keith Raniere is not entitled to a new trial on the charges of sex trafficking and coercing women into sex he was convicted of last year, Judge Nicholas Garaufis ruled Friday

Prosecutors said that as the leader of a cult-like group called NXIVM, Raniere used blackmail and punishment to turn his female victims into sex slaves.

Witnesses testified that Raniere’s ‘slaves’ were forced to provide nude photos as ‘collateral’ to keep them in line.

Raniere was convicted in June 2019 of charges including racketeering, wire fraud conspiracy, forced labor conspiracy, and sex trafficking. He is yet to be sentenced.

Raniere attorney Marc Agnifilo argued in his motion for a new trial that two women identified as Daniela and Nicole committed perjury when they testified that they did not plan a civil lawsuit against Raniere.

He contended that two were among the ‘Jane Doe’ plaintiffs in a civil lawsuit filed in January against Raniere and 14 associates.

Attorney Neil Glazer, who represents the two women, told the New York Post in March they did not initially intend to join the lawsuit but changed their minds after they saw how much evidence was revealed during the trial. 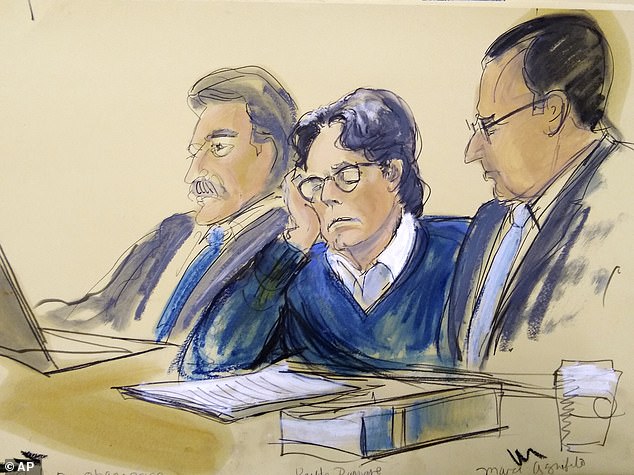 Keith Raniere is seen during closing arguments in a courtroom sketch. A jury convicted him in June on all counts of sex-trafficking and coercing women into sex

‘Assuming for present purposes that Daniela and Nicole are, in fact, among the Jane Doe plaintiffs in that action (which appears to be the case), this hardly proves that either of them had determined to join that action when they testified at trial more than six months before it was filed,’ the judge wrote.

Raniere ran a once-thriving organization based in Albany, New York, called NXIVM, pronounced NEHK-see-uhm. Raniere was accused of turning his female devotees into his sex slaves through shame, punishment and nude blackmail photos.

He was arrested at a Mexican hideout in 2018 following an investigation into the group.

His adherents included actress Allison Mack of TV’s ‘Smallville’; an heiress to the Seagram’s liquor fortune, Clare Bronfman; and a daughter of TV star Catherine Oxenberg of ‘Dynasty’ fame.

The lawsuit filed in January claims that Raniere’s self-improvement group was also a pyramid scheme that swindled millions of dollars out of people.

The federal lawsuit filed in Brooklyn accuses NXIVM founder Keith Raniere and his inner circle of running a corrupt organization that duped victims into paying thousands of dollars for classes based on false scientific claims.

The former members, many of whom are only identified as Jane or John Does, claim NXIVM preyed on people who wanted to better themselves with the cult’s costly self-improvement courses.

NXIVM marketed itself as a personal improvement and professional development training program.

The cult is also accused of forcing victims to undergo illegal human experiments and falsely claiming they could cure medical conditions like Tourette’s syndrome and OCD.

The members claim NXIVM used psychological treatments that were not scientific and that the methods were actually ‘pseudo-scientific hodgepodge’ that risked serious psychological injury and emotional distress.

At least 40 members of the cult were part of a ‘human fright experiment’ in which electrodes were used on their heads to measure brainwaves, according to the lawsuit.

The members believed they were going to be watching Raniere speak but were actually shown graphic footage or five women being beheaded and dismembered in Mexico.

Many who participated in the courses were left traumatized and broke, according to the lawsuit.

The lawsuit comes as Raniere and several of his associates wait to be sentenced for charges related to their involvement in the cult. Raniere faces life in prison.

Among Raniere’s adherents were co-founder Nancy Salzman, Smallville actress Allison Mack and Seagram’s liquor heiress Clare Bronfman who were all charged with racketeering. They pleaded guilty before facing trial.

Mack admitted helping Raniere assemble his harem and collect ‘collateral’ while Bronfman confessed to committing financial crimes for him.

Among those caught up in the group was a daughter of Dynasty TV star Catherine Oxenberg. Her daughter India left NXIVM after her mother publicly spoke out against it. ‘This was a very frightening group,’ Oxenberg said after Raniere was convicted.

‘I had to save a child who was caught in the grips of this cult, so I wasn’t going to stop until I succeeded.’