The doctor who branded Nxivm members with a cauterizing pen and no anesthesia is currently recruiting individuals to join her own ‘wellness group.’

Dr. Danielle Roberts would allegedly sear the flesh of these woman while they were held down by four others with the initials of Keith Raniere and Allison Mack per witness accounts and federal court documents.

It was a task that would take up to an hour as the woman cried, flailed around the table and screamed out in agony per multiple reports, and yet Dr. Roberts has been cleared of any wrongdoing by the New York State Board of Health.

In fact, DailyMail.com has learned the Nxivm member is even set to speak in November at a medical conference on holistic healing, where she is promoting membership into her group, EXO/ ESO.

Hypocritic oath: Dr. Danielle Roberts (above) has been named by former Nxivm members as the person responsible for branding women in the sex-slave cult Flesh wounds: Dr Roberts would allegedly use a cauterizing pen to burn the flesh of young women with a brand (above) that was the initials of Keith Raniere and Allison Mack

EXO/ESO is described as a ‘program designed to build total mastery over the physical, emotional and thought components of human performance’ and, like Nxivm, carries a hefty price tag.

One class costs $750, though conference members are offered a 10 percent discount if they sign up within 72 hours.

There is also a group rate if four people sign up for a series of sessions together to learn more about Dr Roberts’ teachings.

Dr. Roberts is a family doctor who had been based out of Clifton Park, the same town where DOS members and Raniere lived in upstate New York, and is still licensed to practice medicine in New York.

Sarah Edmonson described the branding process in depth while being interviewed for the podcast Escaping Nxivm, saying her best friend Lauren Salzman asked her to be her slave. 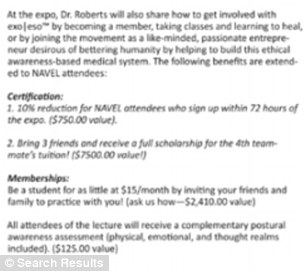 In literature for an upcoming conference, Dr Roberts encourages people to join a group she has founded called EXO/ESO

She then flew to Albany shortly after giving birth to her first child and was branded in the home of Allison Mack.

She had previously been stripped naked and her eyes covered with a cloth to keep her in the dark as to what is going on, and the identity of the other women.

‘What we’ve been told for everyone’s security is we’re not supposed to know who else is involved so please don’t look, Lauren’s asked us,’ she explained.

‘Of course, I am gonna peek. And Lauren leads us into a small like extra bedroom, I guess that the room itself is very plain, like there’s a chest and a massage table in the middle of the room. And that’s it.’ 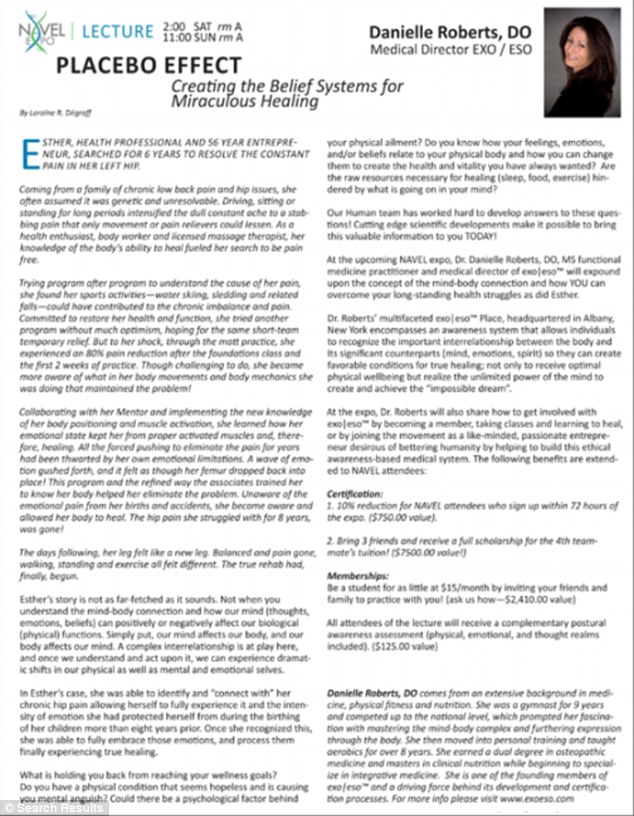 About her: She was cleared of any wrongdoing by the New York State Board of Health, and DailyMail.com has learned she will soon be speaking at a medical conference (above)

Soon, the branding ceremony got underway, and all Edmonson could do in retrospect is wonder why she did not flee the scene.

‘This part is a blur. Dr Danielle Roberts comes in and we’re introduced to her as the is the person who’s going to give us our tattoo,’ said Edmonson.

‘What happens first, I believe we’re asked to get naked again and Dr Roberts has a stencil. We’re supposed to place it on her body so that we can figure out where it needs to go so it’s underneath out underwear line so we could still wear a bathing suit and people won’t see it.’

At this time, none of the women know that they are being branded with the initials of Mack and Raniere.

‘And Lauren tells us something about the symbol being for the four elements and … this is the horizon, for air, and this is the mountains, for earth and it’s a symbol for the elements and for our strength and our connection to the you know earth is women or some bulls***,’ said Edmosnon.

‘The hardest part for me is just when i go through it like recognizing so many opportunities that had just to run. You know it’s so hard to explain to people why I felt like I couldn’t.’

She then told Salzman she did not like the symbol and it was too big, but had her complaint dismissed and was instead asked to help with the first girl.

‘The first person lies down on the table and Lauren suggests that someone goes to her head and kind of … hold onto her arm, just have something to hold onto and grip,’ said Edmonson.

‘And suggested that two women go down and help keep her legs down so she wouldn’t you know move and twitch too much, so that Danielle could do a straight line.

‘At this point I’m recognizing there’s no anesthetic and then Dr Roberts takes out this pen that has a laser tip to it, and i find out that it’s a cauterizing iron.

‘Like she just flops and lands, flips and like screams. And now she has this like little hole of burnt flesh, where the tip of the cauterizing art has cut her.

‘Lauren has given us these medical masks to cover our noses because of smell. And I’m looking at the girl, and the woman who’s at her feet. I could only see her eyes and we’re both crying.

‘And I’m I’m with a friend who’s hurt, who’s in pain. You know she’s in deep pain and I’m supposed to help her go through this and the same time I’m thinking how am i gonna get out of here, like literally where is the back door.

‘How do I escape? How do I let enough time go by so i can figure out how to get out?

‘And it takes her forty minutes at least, maybe forty five minutes to go through every line.

‘And in between each line we stop and Lauren reads something about you know commitment and honor. And we started by saying master would you grab me it would be an honor.’

When is came time for Edmonson to lie down she realized the less she moved the quicker it would all go for her during the branding process.

‘I thought about childbirth. I thought, I’ve already been through pain before,’ she explained.

‘The most searing awful pain was being dragged across my body like a f***ing fire, and every time i opened my eyes there is Lauren, staring at me lovingly and reading me this f***ing religious scripture about whatever the f** commitment and honor.’

When they were all done, Salzman then had them take a group photo.

‘She asked us to take a photo a group photo with our brands, and we had to keep doing it until everyone’s happy, everyone looks happy,’ said Edmonson.

‘And not hiding any part of our body, like girls on a beach, but we’re not wearing our clothes like just we’re just happy and that was a forced fake photo.’