A promising young Democratic Socialist candidate for New York State Senate has been apparently exposed for lying about her Jewish heritage and status as an immigrant.

Julia Salazar, 27, a progressive Democrat who has been touted as the next Alexandria Ocasio-Cortez, and like Ocasio-Cortez is also affiliated with the powerful Democratic Socialists of America, which is the largest socialist group in America, has gotten caught up in what appears to be a web of lies.

Salazar has been aggressively campaigning in Brooklyn, New York, where her image and name have been flurried on doorsteps and advertisements, as she is going up against incumbent state Senator Martin Malave Dilan.

During one campaign event, the 27-year-old says ‘I am a Jew of color. I am a Colombian, Amerindian, but I am also Jewish… I immigrated to this country with my family when I was very little from Colombia.’

Democratic Socialist Julia Salazar claims to be an immigrant, but she was born in Miami, and Jewish, but her entire family thinks they are Catholic. pic.twitter.com/Tpn7GqZfDO

False statements: During a campaign event (event is pictured here) Julia Salazar said ‘I immigrated to this country with my family when I was very little from Colombia’ 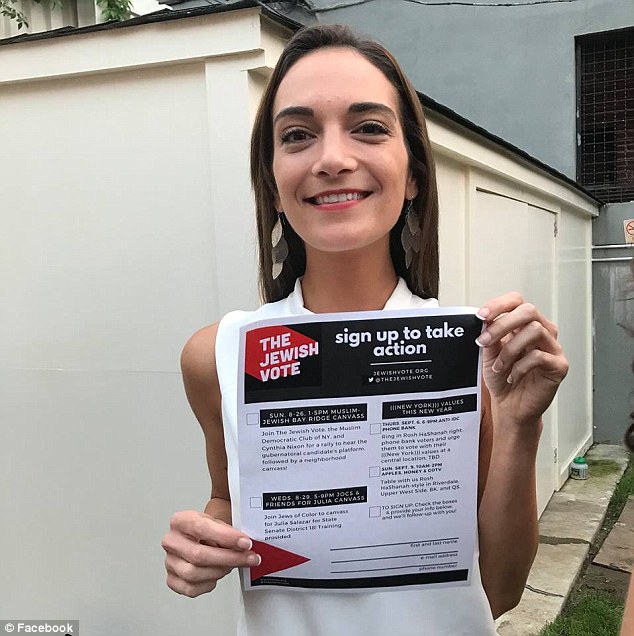 Under fire: Salazar also claimed her father is Jewish, though her brother bunks that piece of biography as false, saying no one in their family is Jewish and they were not raised Jewish 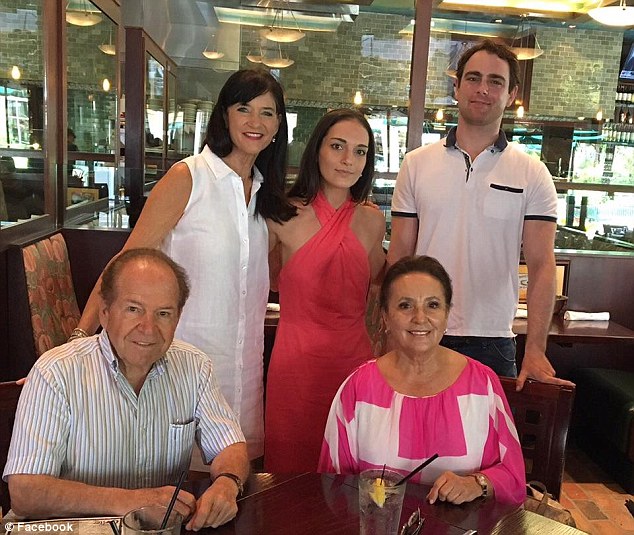 Salazar’s mother Christine Salazar (top left) and her brother Alex Salazar (top right). Alex says they do not have any Jewish heritage and were not raised Jewish

However her brother, Alex Salazar, contributed to a report by the Tablet, in which he says ‘There was nobody in our immediate family who was Jewish … my father was not Jewish, we were not raised Jewish.’

He also added that one of their father’s brothers was a Jesuit priest.

There is also the issue of the claiming she was an immigrant on her campaign’s website, however she blamed the ‘error’ on a campaign staffer, despite repeating the claim at campaign events and in various interviews.

Her campaign site has been updated, and it now says ‘A daughter of working-class immigrants, Julia was raised by a single mother, attended public schools, and began working at a local grocery store when she was 14 to help make ends meet.’

However both of her parents are not immigrants. While her father is from Colombia, her mother is a United States citizen.

She shot back at the expose, saying she ‘made it crystal clear that I had been born in Miami.’

Salazar had proclaimed her immigrant background in several publications.

A profile in the New York Magazine calls her a naturalized citizen.

A piece in the Intercept has since been corrected: ‘An earlier version of this piece referred to Julia Salazar as a Colombian immigrant, based on claims she made to The Intercept and elsewhere. She refers to herself as a ”proud immigrant” on her campaign website. The story has been updated to remove that reference, and to make clear that while Salazar said she emigrated from Colombia, she was in fact born in Miami.’

Salazar ruffled at the questioning of her Jewish religion. She said such inquest of her faith is part of ‘a long history of bigoted policing of the identity of Jewish people of color, particularly people with patrilineal Jewish heritage or Jews who converted. I’m sad to see that brought into my campaign.’ 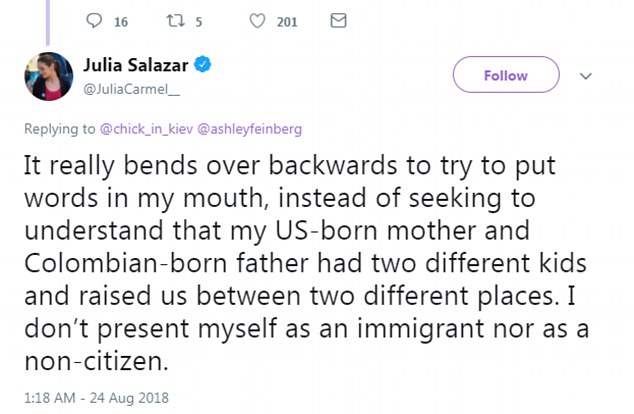 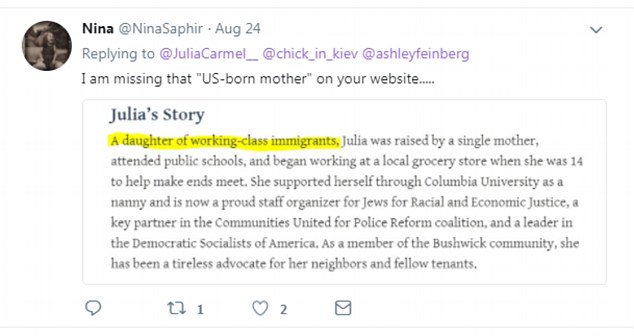 However, one Twitter user responded that despite her website being ‘corrected’ it was still misleading in its wording about her family’s immigrant status

She did undergo a two month conversion to conservative Judaism in 2012.

As a student at Columbia University, she appeared to have more conservative views.

In 2012 and 2013, she was the president of Columbia Right to Life, the campus’ top anti-abortion group.

She was also a registered Republican until just last year, according to the New York Daily News.