Video has emerged showing a large group of people causing a late-night disturbance in Brooklyn by shooting dozens of fireworks into the sky, amid a citywide crackdown on the illegal explosives.

Witness Christopher Maslanka was driving through Crown Heights on June 16 when a ‘mob of 50 to 60 people’ emerged and began setting fireworks alight in the middle of the road.

Maslanka captured the incident on video which showed the crowd marching down the street while firing off multiple Roman candles into the air in an elaborate display lasting about two minutes long. 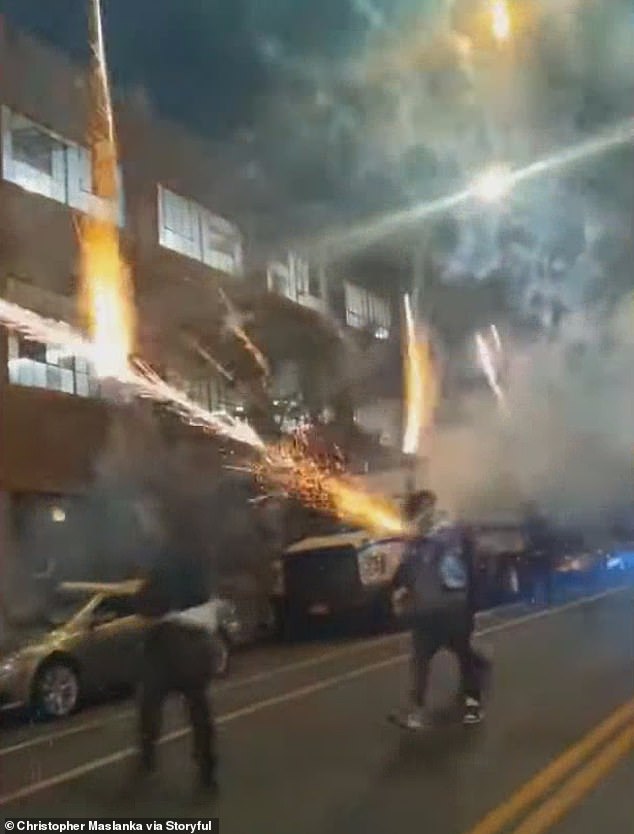 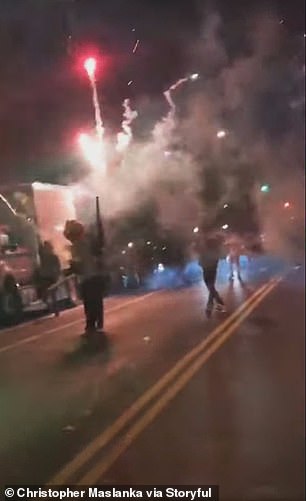 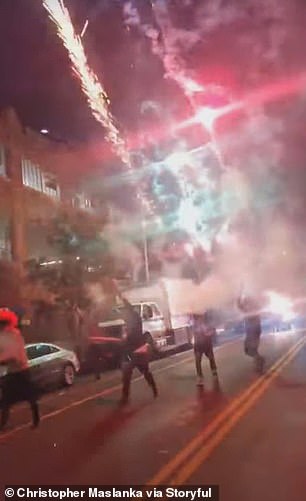 ‘I have encountered many random people setting off large mortars but nothing like this where there was a large swarm of people who came running down the street,’ he told Storyful.

‘I sat around for another five minutes but they disappeared as quickly as they came.’

The shocking video was shared amid a growing fireworks problem in New York City that has left residents losing sleep due to noisy displays occurring nearly every night for the past three weeks.

Mayor Bill de Blasio was forced to take action after fed-up New Yorkers pulled up outside his residence and honked their horns on Monday night demanding he take control of the issue.

An ‘illegal fireworks task force’, consisting of 10 NYPD Intelligence officers, 12 FDNY Fire Marshals and 20 members of the Sheriff’s Bureau of Criminal Investigation, was established on Tuesday, and has since seized thousands of dollars worth of explosives trafficked from out of state.

At least eight people were arrested during a fireworks bust across the city on Tuesday night. 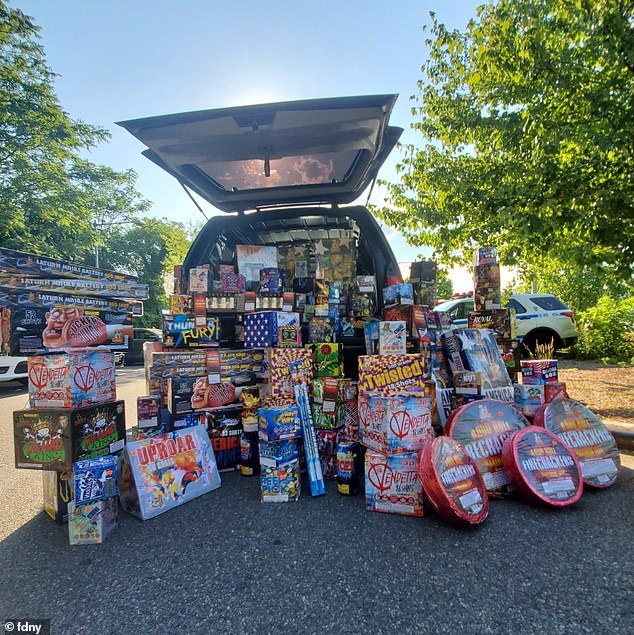 FDNY officials released photos of Tuesday’s bust in Staten Island after two men from Queens were found with $6,000 worth of illegal fireworks in their car 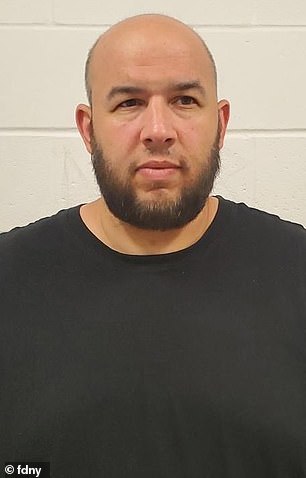 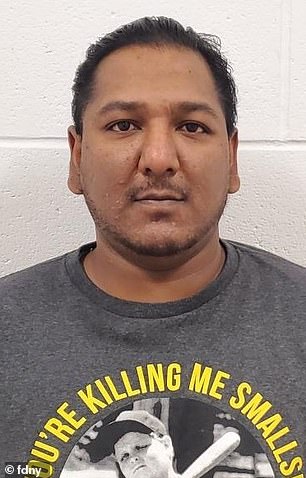 Matthew King (left) 35, and Rayval Singh (right) 22, were arrested and charged with reckless endangerment and the unlawful dealing of fireworks 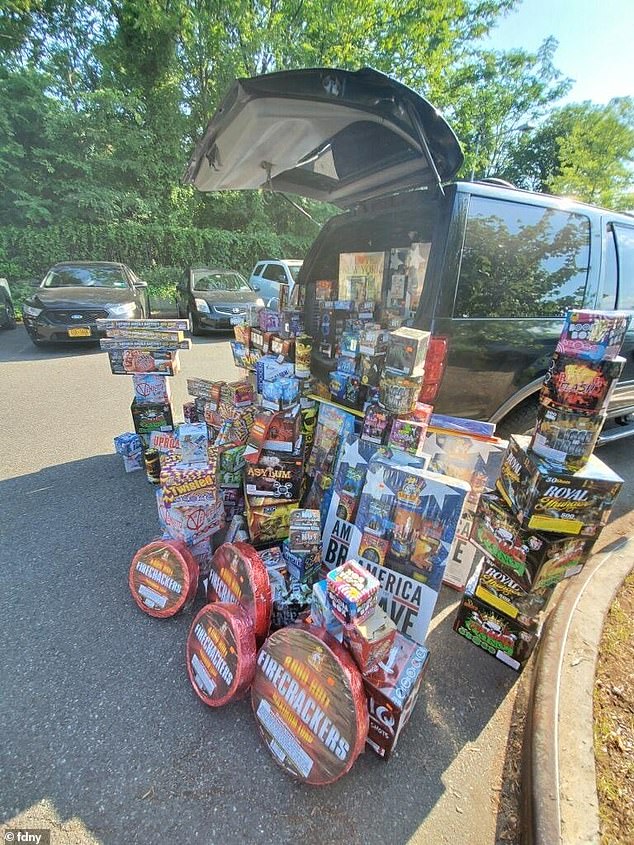 The two men were stopped on the Goethals Bridge while they were returning with their massive haul from Pennsylvania, authorities said

In Staten Island, two men were arrested and charged after they were caught with $6,000 worth of illegal explosives that were trafficked from Pennsylvania.

Matthew King, 35, and Rayval Singh, 22, were stopped on the Goethals Bridge while they were returning home with the massive haul, authorities said.

A photo released to the public showed the large collection of fireworks – everything from firecrackers to sparklers and Roman candles – loaded in the trunk of the vehicle.

They were charged with reckless endangerment and the unlawful dealing of fireworks.

Another two men, ages 31 and 33, were caught with $2,000 in illegal fireworks in Brooklyn’s Canarsie neighborhood.

In East Flatbush in Brooklyn, a 23-year-old man and 22-year-old man, were busted by task force officers after they were found selling explosives – valued at more than $2,500 – brought in from Pennsylvania, authorities said.

Two people in the Bronx were also caught dealing fireworks from their car, while one person was issued a court summons for buying them. 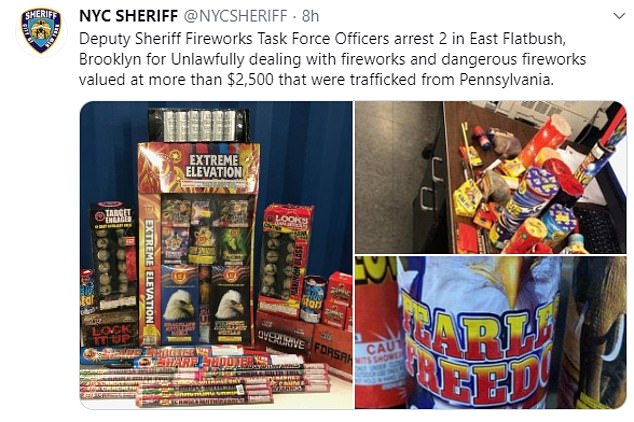 Authorities shared photos of another bust in East Flatbush, Brooklyn, where $2,500 worth of fireworks were seized 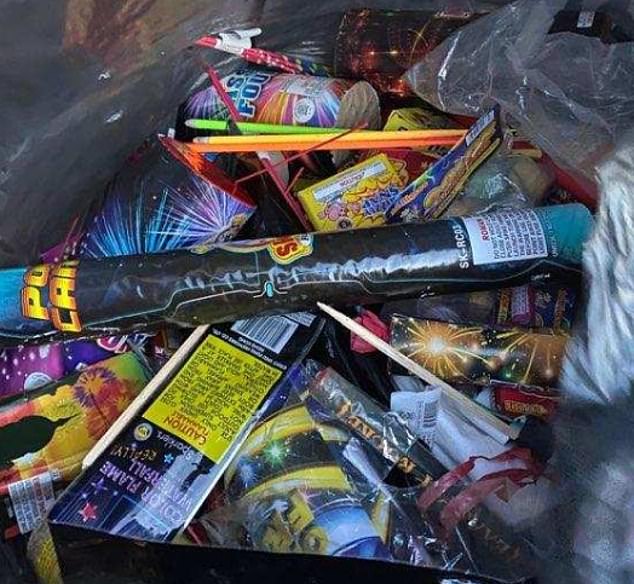 Two people in Canarsie, Brooklyn, were arrested after officials seized $2,000 worth of fireworks 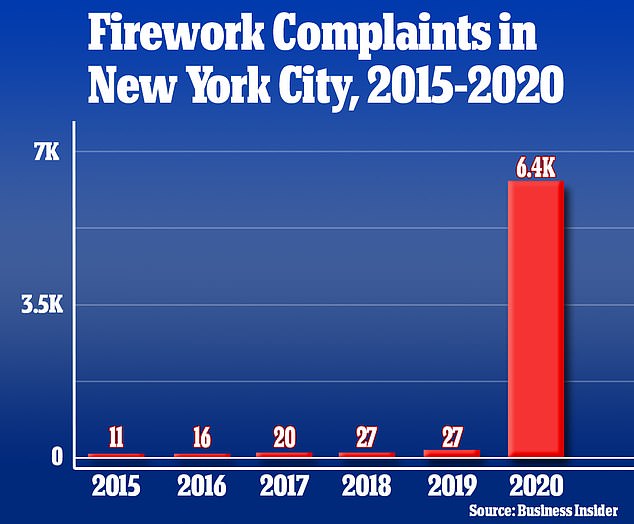 De Blasio said the task force will conduct sting operations in a bid to restore peace and the safety of New Yorkers following a string of firework-related incidents that have left some people injured.

A three-year-old girl was injured on Wednesday while watching fireworks from her apartment window.

The NYPD also announced it is offering a $2,500 reward for information leading to the arrest of the man who was filmed throwing a lit firework at a homeless man sleeping on the street on Monday.

Video of the disturbing incident was shared on social media, showing a man hurling the explosive in the homeless man’s direction as he slept on the sidewalk in 67 Lenox Avenue.

The victim was taken to the hospital and was treated for minor burns.

‘This is a real problem. It is not just a quality-of-life problem and a noise problem,’ de Blasio said.

The dangerous trend has become so widespread, the city’s 311 public service hotline has received 6,385 complaints of fireworks from June 1 to June 19 – compared to just seven calls fielded this time last year.

The phenomenon has also spread across the country, with Chicago, Philadelphia, Boston and California cities reporting an increase of complaints over the nightly nuisance.

Chicago has also been dealing with an illegal fireworks problem as officials reveal complaints over late-night displays have increased by 736 per cent, with 7,042 calls received through Sunday, according to the Chicago Sun Times.

With a statewide ban on the explosives, residents have been traveling to areas out of state, such as nearby Wisconsin or Indiana, where they are legal, to bring them back home. 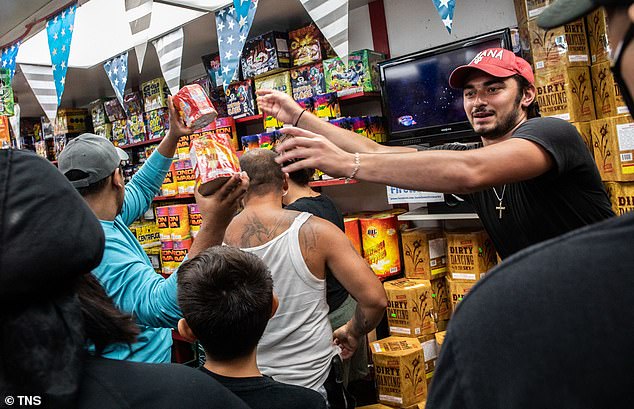 Chicago residents have been traveling out of state to legally buy fireworks before bringing them back home. Pictured: A busy fireworks store in Hammond, Indiana on June 22 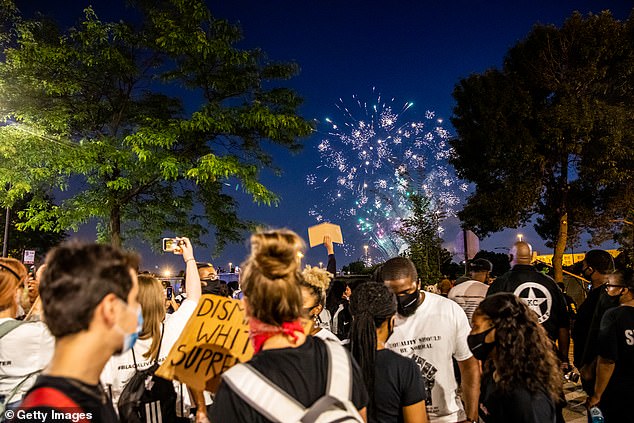 Fireworks complaints have soared in Chicago in the past month, officials said. Pictured: Fireworks display during Juneteenth celebration

The increased use of fireworks have only made things worse for veterans who suffer from post-traumatic stress disorder and who are typically triggered during Independence Day celebrations.

All the sudden booms can trigger that PTSD they are living with, and they protect themselves by insulating themselves,’ Sharon Stokes-Parry, president of Montford Point Marines Association, told the paper.

Mayor Marty Walsh last week said the number of calls to police over illegal fireworks have skyrocketed by 2,300 per cent in May compared to the same time last year.

Walsh said worried residents have called in to report gunshots that actually turned out to be fireworks. 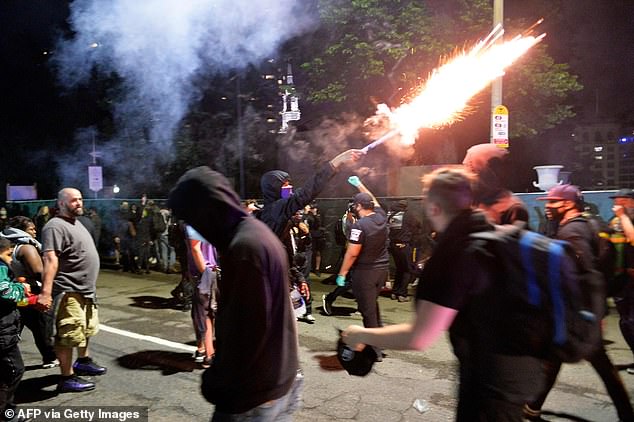 A protester fires fireworks during a demonstration on June 2. Boston Mayor Marty Walsh says complaints over explosives have soared by over 2,000 per cent

‘People are frightened, people are losing sleep. Babies and kids are woken up. Pets are terrified. Our veterans and others with PTSD are experiencing real harm,’ he said in a press conference.

A 21-year-old man has been severely injured after a firework exploded in his face in Cleveland’s Collinwood-Nottingham neighborhood on Tuesday night.

The man is reported to have been among a group of 12 people who had been drinking and setting off fireworks on the street late at night, police said.

Witnesses said he had lit the explosive himself while others said the man was injured after he stood too close to a firework set alight by someone else, Cleveland.com reported.

The man was taken to the hospital with severe injuries after police arrived at the scene to find him bleeding heavily.

Ohio residents are allowed to buy fireworks, however, setting them off in the state is illegal.

Officials in Oakland, California, say they have received more complaints of illegal fireworks and reports of celebratory gunfire this year than is typical before the Fourth of July. At least five fires have been linked to fireworks since late May, officials said.