Speaking in an interview with CNN, Dr Ashwin Vasan, commissioner of NYC Health, warned the city’s tally of 500-odd cases — the highest in America — was likely just a fraction of the total.

He claimed the ‘root cause’ of the rapid spread of the illness was a failure by federal officials to roll out jabs against the disease quickly.

New York City (NYC) and Washington D.C. are offering the jabs to gay or bisexual men who have multiple sexual partners every two weeks in an attempt to put a lid on the outbreak.

But their roll outs have been repeatedly blasted for not offering enough doses, with available appointments being fully booked minutes after they are opened.

NYC is now delaying second doses — due four weeks after the first dose — because the priority is to roll out first jabs. The city says this is safe, but other experts have raised concerns as this has not previously been tested.

Dr Ashwin Vasan, who heads up New York City’s Department of Health, said the city was struggling to get a handle on monkeypox because it was getting too few jabs from the central Government 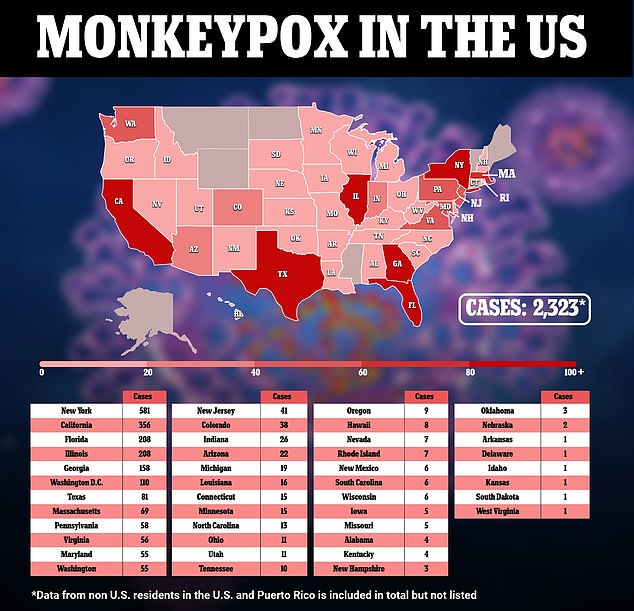 Speaking about the monkeypox vaccine roll out, Vasan said it was proving ‘challenging’ with several technical issues.

‘But the really root issue here has been access to vaccine supply,’ he said, ‘and that’s a national issue’.

‘We need to start seeing much more vaccine, and the rest of these things will smooth out as people can get access to the preventive therapies they want.

CDC chief insists monkeypox outbreak is NOT out of control

The director of the CDC insisted warnings that the monkeypox is out of control were ‘misinformed and off base’ on Monday despite cases in the U.S. quadrupling over two weeks.

Dr Rochelle Walensky also claimed in a statement that it was still possible to ‘significantly decrease’ infections thanks to more testing — with about 10,000 swabs carried out a day — more vaccines, and more awareness.

Walensky’s comments came after Dr Scott Gottlieb, former commissioner of the Food and Drug Administration, warned on Sunday that the window to get a handle on the tropical disease had likely already closed.

Firing a broadside at the Centers for Disease Control and Prevention (CDC), he also accused the agency of repeating the same mistakes as when Covid first arrived.

‘We really need much more vaccine. I know that our partners are working hard in Washington and elsewhere, but we need that as soon as possible.’

NYC has received more than 40,000 doses of the Jynneous jab to date, which are all being administered as first doses.

But demand remains high, with appointments being booked out within minutes after they are released.

Nationwide, almost 200,000 jabs have been distributed to states so far.

America has also placed orders for millions more doses — in a sign officials expect to use many more jabs.

Asked whether the current cases tally for NYC was accurate, Vasan said: ‘I think we can definitively say it’s not.

‘And that’s because only now are we seeing clinical testing starting to ramp up.

‘I think we’re going to see cases rise all across this country over the coming weeks as clinical testing increases.’

On preventing the disease spreading, he added: ‘I will say that abstinence as a message doesn’t really work. We know this.

‘It’s not a good public health tool because it’s really about giving people the information to make safe choices but understanding we need to meet them where they are with those choices and give them the information to tell them how monkeypox is transmitted.’

New York City’s vaccine roll-out was slammed when it began last month for being announced via Twitter, meaning the message got to those on the social media platform first.

It offered walk-ins for the first 24 hours, before scrapping this amid high demand for the shots.

The roll-out was also criticized after a technical glitch saw thousands book their vaccination appointment early.

The Department of Health had said it would only release the vaccination slots after midday, but the appointments went live early on a separate link that had been used to book appointments during the first round of inoculations.

Earlier this month the city also announced it was delaying second doses because it was not receiving enough jabs from the Federal Government.

NYC also undertook contact tracing, although it appears to have failed to curb the rash-causing virus with many cases turning up not linked to other infections.

America is rolling out the Jynneous vaccine to fight the virus, which is given as two doses about four weeks apart.

It also has more than a million doses of the ACAM2000 vaccine available, but this is not being used because it is associated with serious side-effects.