The price of a pack of cigarettes in New York City is going up – to at least $13 – and the number of places you can buy them is going down under legislation signed Monday by the mayor.

The new minimum price law, which takes effect on June 1, will make New York the most expensive place in the US to buy cigarettes, Health Department officials said.

‘We are sending a loud and clear message that we will not let their greed kill any more New Yorkers without a fight,’ Mayor Bill de Blasio said at a bill signing ceremony at Kings County Hospital in Brooklyn.

‘These new laws will not only help reduce the number of smokers in our city, but also save lives.’

Mayor Bill de Blasio signed legislation Monday raising the minimum price for a pack of cigarettes to $13 in New York City, making the city the most expensive place to buy cigarettes in the country. De Blasio is pictured Monday at Kings County Hospital

Currently, the minimum allowed price per pack is $10.50.

The planned price hike is one of seven bills the Democratic mayor signed Monday aimed at pressuring the city’s 900,000 estimated smokers to quit.

Another new rule will reduce by half the number of retailers licensed to sell tobacco products. About 8,300 businesses now have a license.

The numbers will be reduced through attrition, officials said. Philadelphia and San Francisco have similar licensing restrictions.

Other laws will ban the sale of all tobacco products in pharmacies, require licensing of e-cigarette retailers and require all residential buildings to have smoking policies that are given to all current and prospective tenants.

Some residential buildings will be required to ban smoking in common areas like hallways.

New York began a regulatory war on smoking under the previous mayor, Michael Bloomberg, a Democrat-turned-Republican-turned-independent. 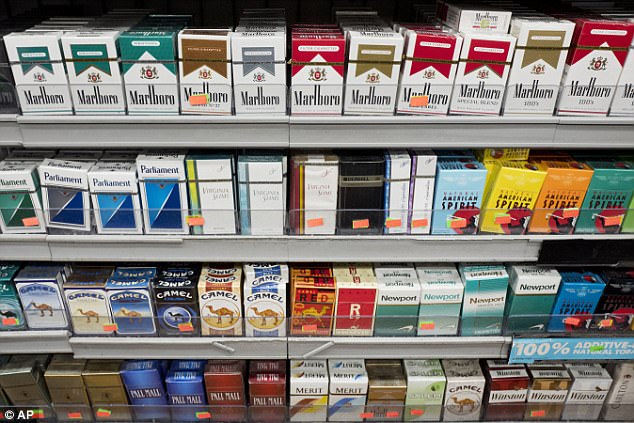 The minimum price increase will go into effect on June 1, 2018. Another bill gradually reduces by half the number of licenses issued to retailers to sell tobacco products and starting on January 1, 2019, pharmacies, both local and chain stores, will be banned from selling cigarettes

The city has long subscribed to a theory that driving up prices, either through high taxes or by setting price minimums, causes people to either give up smoking or not start.

City health officials said they believed the new restrictions could decrease the rate to 12 percent by 2020.

Opponents of the price increase say it may push many smokers into buying untaxed, unregulated cigarettes on the black market.

So-called butt-leggers already evade taxes and price minimums on a widespread scale by hauling in cases from low-cost states like Virginia and North Carolina, or even from elsewhere in New York.

‘These measures will destroy the business investment of retailers who have been leading the effort to prevent youth access to tobacco products, and the result will be lost revenue, lost jobs and an increasing number of sales in unregulated and illegal settings,’ Jim Calvin, president of the New York Association of Convenience Stores, said after the legislation passed earlier this month.

He said no decision has been made by his organization, which is part of a national trade group representing convenience stores, on whether to challenge the legislation in the courts.

A spokeswoman for RAI Services Company, a subsidiary of Reynolds American Inc., said the company agrees with the mayor’s desire to curb youth tobacco usage.

‘However, there should be concern that this ordinance will most likely only further exacerbate the illicit trade of cigarettes in New York City, which already has the highest percentage of contraband cigarettes in the country,’ said Brittany Adams.

Ann Boonn, director of research at the Campaign for Tobacco Free Kids, noted that New York City’s current $10.50 minimum price doesn’t prevent some retailers from selling packs at more than that.

She noted a Chicago ordinance setting an $11.50 per pack minimum on cigarettes is on hold pending litigation.

Also, she said some states require a minimum markup on cigarettes based on a percentage of the base price set by manufacturers and wholesalers, which in some cases already puts those prices at more than $11.50 a pack.