New York City is ‘on track’ to reopen on June 8, Governor Andrew Cuomo finally announced on Friday, bringing an end to the city’s brutal 12 week lockdown.

Speaking at his briefing on Friday, he said the city still had to bring on more contact tracers and wait for more hospital beds to become free but that those things will be achieved next week and the city will reopen the week after.

‘We believe all of these things can be done next week. We think all of this can be done by next week and we would be on track to open the week afterwards.

‘We know where the hotspots are in the city… we are on track to open on June 8.’

It is the first time either he or Bill de Blasio have given a end date for the lockdown and finally brings relief to the city of 8.4million.

In the first phase of the restart plan, some 400,000 workers will go back to their jobs in manufacturing, construction and curbside retail.

Bars and restaurants in the city shut down on March 16 and all non-essential businesses closed four days later on March 20.

By June 8, it will have been completely closed for nearly 12 weeks.

On Thursday, there were 152 new COVID hospitalizations across the state of New York and 67 people died.

On Thursday, just 61 people were admitted to NYC hospitals with suspected cases.  The infection rate in New York is now down to 5 percent and more than 20,000 people are being tested every day. 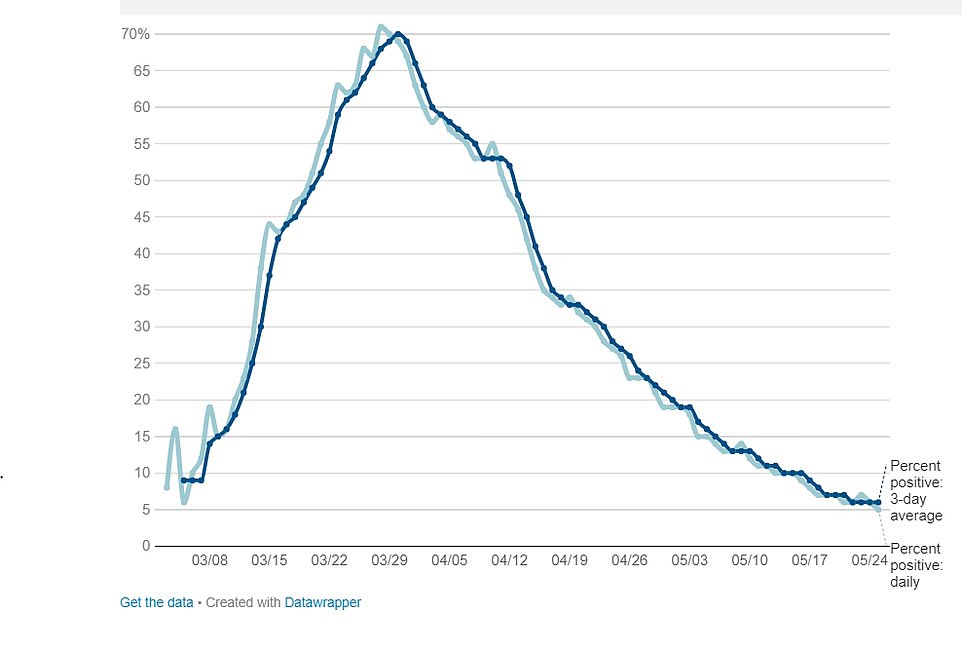 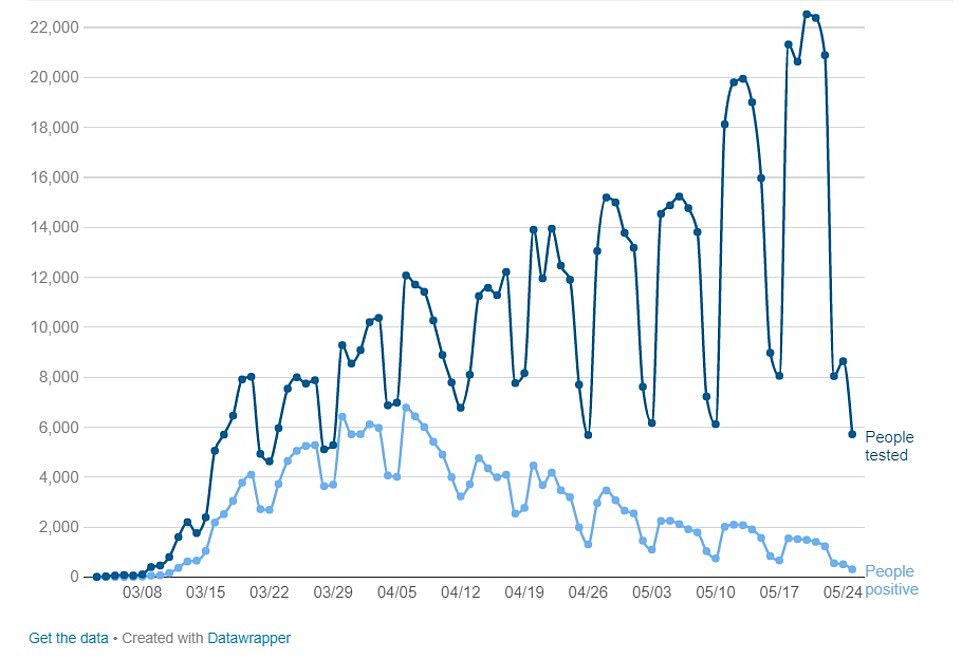 Fewer people were being tested at the end of March than they are now which highlights even more that the virus is not as prevalent in the city but 8.4million are still being told to stay at home 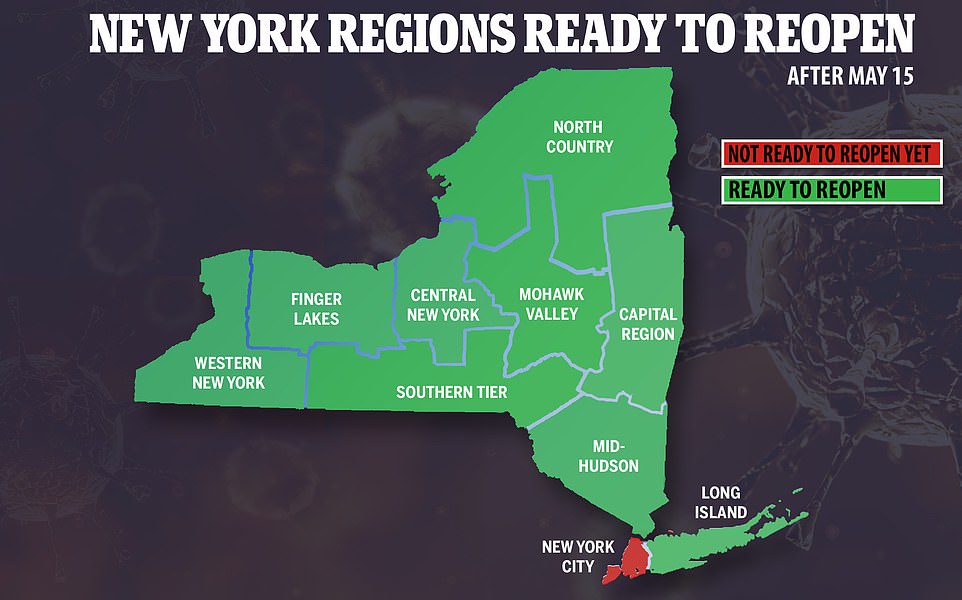 Cuomo also shared the guideline for phase 2 businesses for the first time which include daily health screenings for employees in the form of questionnaires and temperature checks. It’s unclear if employers have to do both.

The infection rate is dropping as the testing rate increases, further highlighting the shrinking presence that the virus has.

Guidelines not yet announced

Guidelines not yet announced

The second phase lets office workers return to their jobs, resumes hair salons and barber shops along with real estate. Local officials say they were told by the state on Wednesday that they should prepare to reopen on Friday.

Cuomo stalled the decision, handing it over briefly to Michael T. Osterholm, Director of the Center for Infectious Disease Research and Policy at the University of Minnesota, and Dr. Samir Bhatt, Senior Lecturer at Imperial College London.

They reviewed the areas’ figures and phase 2 officially started at 1pm on Friday.

He was criticized for stalling it overnight.

‘Look, the governor can make that comment to someone on the radio but we can’t get a call from the governor’s office?  You know what, we’re opening tomorrow,’ Chemung County Executive Chris Moss said angrily on Thursday.

Elise Stefanik, the Rep. Congresswoman representing New York’s 21st District which is the furthest north in the state, released a statement slamming the decision as ‘arbitrary’.

‘I have heard from hundreds of frustrated and upset local officials and small businesses who are understandably outraged by the unacceptable and arbitrary decision by Governor Cuomo to move the goal posts for re-opening.

‘Small businesses are barely hanging on and have invested in COVID-19 preparations to safely update their operations. Our North Country businesses and communities have worked hard to meet the metrics laid out for Phase 2 required by New York State and our region should enter Phase 2 of re-opening as planned,’ she said.

Rep. Tom Reed said Cuomo ‘moved the goal posts in the middle of the night’.

The change in rules overnight is the latest in a string of moves by Cuomo that have been criticized.

On Thursday, he trotted out celebrities Rosie Perez and Chris Rock to tell New Yorkers to wear masks and practice social distancing.

It was deemed ‘pathetic’ and an attempt to distract people from the lack of planning about how to get people back to work.

The only advice that has been issued so far is for phase one businesses which include curbside retail, manufacturing and construction jobs.

De Blasio says that it will allow between 200,000 and 400,000 people to return to work but there remains no publicly available plan for how they’ll get to work on the subway or on buses.

Some guidelines have been issued by the state about how to enforce social distancing in the workplace but not all have. 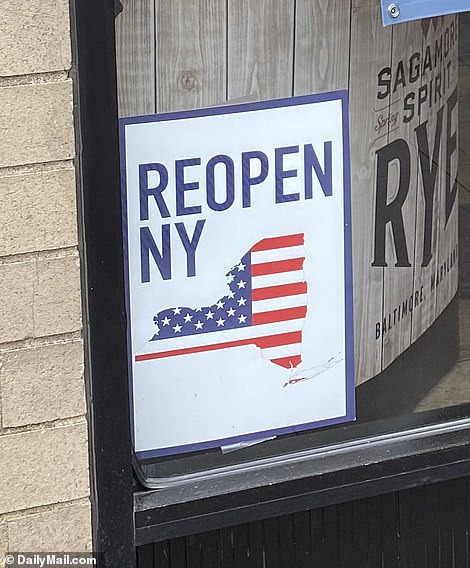 A sign in the window of Gracie Mews restaurant on the Upper East Side calling for NYC to Reopen. Restaurants still are not allowed to offer dine-in service but can do take-out

New York Mayor Bill de Blasio on Friday branded small businesses that are reopening in defiance of shutdown orders ‘bad apples’ and asked reporters at his daily press briefing for the addresses of any they knew of so he could send police to shut them down.

Hundreds of small businesses are flouting the ongoing lockdown order to open their doors across the city after growing tired of waiting for action and information from de Blasio and Gov. Cuomo.

De Blasio on Friday stuck to his vague date of ‘sometime in the first two weeks of June’ to start phase one of New York City’s reopening but refused to give any more precise information.

He fumed that any business that defies him to reopen early will be hit with fines starting at $1,000 and said it would become worse from there if they keep serving people.

He claims to have spoken to small business owners who say they are ‘hanging on’ and accept having to stay closed and hemorrhage money until he says they can get back to work – a claim that has been blasted as ‘outrageous’ and ‘out of touch’ by businesses that say they are being held prisoner by the state and city.

On Friday, he said: ‘There are a few bad apples that are trying to jump the gun.’

He then asked a reporter, who’d mentioned a beauty salon in Midtown that had reopened, if he’d provide him with the name and address of the salon in order to shut them down.

All over New York City, people have placed Reopen New York signs in their windows in a show of support for the coalition of 1,000 small businesses that are flouting the lockdown order and risking having their licenses revoked.

In New York City on Thursday, there were just 61 hospitalizations for suspected COVID-19 cases and of the thousands of people tested for the virus, only five percent tested positive.

Daily deaths are now at record lows – a tenth of what they were at the height of the pandemic – and the new cases that keep popping up are largely contained to a handful of small neighborhoods that are predominantly lower income, minority communities. 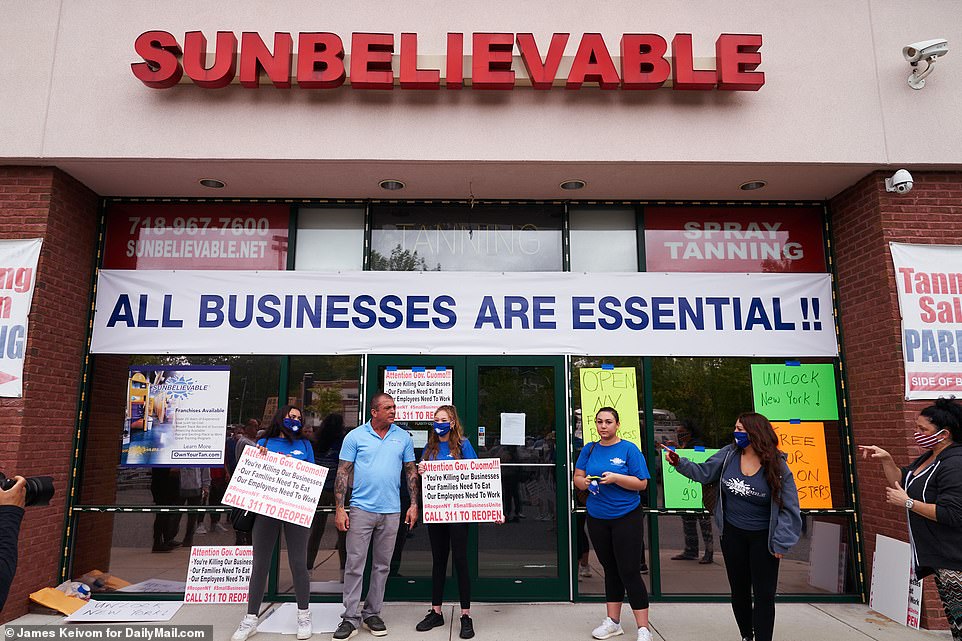 Sunbelievable, a tanning salon on Staten Island, reopened on Thursday after owner Bobby Catone (shown in light blue shirt) said he felt like he was being held ‘prisoner’ by city officials keeping him closed 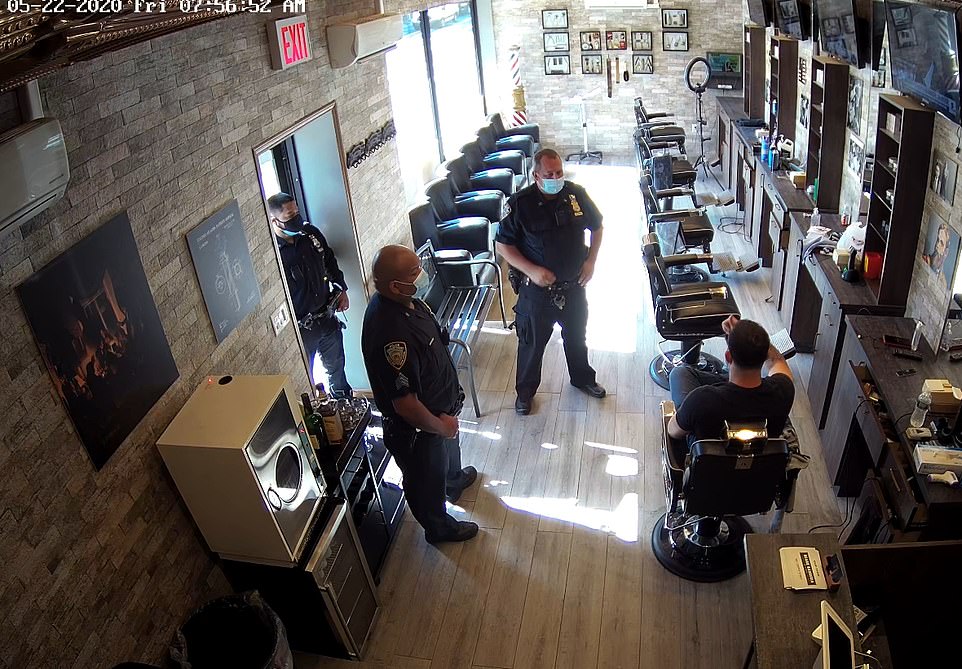 Beard Barberia Cut and Shave in Williamsburg, Brooklyn. Owner Ilya Iskhakov reopened quietly on May 22 and three cops showed up to shut him down again (shown). He’s since started giving people haircuts in their homes and even moved to a temporary premises to avoid being caught 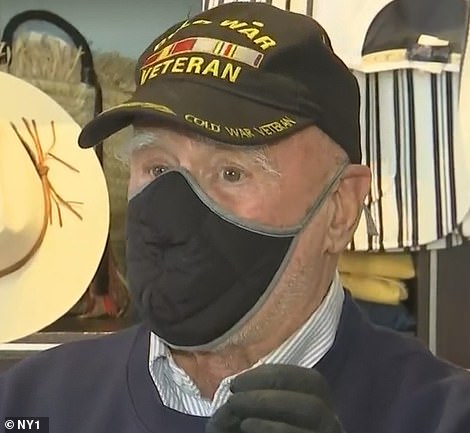 Owner Eliot Rabin, 78, let two people in the store at a time and provides shoppers with masks and gloves. He says he couldn’t afford to stay closed

Despite the figures, the entire city remains shut down and there has been no guidance for businesses in any other phase.

Dine-in restaurant services are in the third phase but the industry is begging to be allowed to start serving people on socially distanced, outdoor tables before then.

Despite their pleas and the ongoing anguish of businesses like small retailers, many of whom sell similar items to what’s available on Amazon and at Home Depot – which have served people throughout the pandemic – de Blasio and Cuomo are keeping them closed.

Both are insisting on a federal bailout to plug the state and city’s deficit.

De Blasio on Thursday asked for a $7billion loan from the state to cushion his budget but he was turned down.