The new chief of New York City’s public schools got a lot of attention over a tweet he shared on Friday that referred to some parents in the school district as ‘wealthy white Manhattan parents.’

Chancellor Richard Carranza tweeted a story from the rawstory.com web page, which posted to his account with the following auto-generated text: ‘WATCH: Wealthy white Manhattan parents angrily rant against plan to bring more black kids to their schools.’

Carranza told NBC’s News 4, ‘They weren’t my words,’ despite the fact that the tweet sparked a lot of engagement over the headline, which was mostly in support of the chancellor’s post.

The linked article included a video originally shot for NY1 News, showing parents at PS 199 reacting to a proposed plan for the Upper West Side’s 17 middle schools to be required to reserve 25 percent of their seats for children scoring below grade level in statewide English and Math tests.

As for the resulting noise from the headline included in his post, Carranza said, ‘I don’t engage in Twitter fights.’

The chancellor didn’t have to, because high profile social media users brought facts to an ensuing debate in this comments.

Mark Harris, the author of Five Came Back which was adapted into a Netflix film, wrote critically in reply to Carranza:

‘ONE parent, who does not mention race, complains in the report you linked, and the very same report notes that not only do many parent leaders support the plan but that the UWS will likely be the city’s first district to do something this progressive. Why tweet so divisively?’

‘There is a 50 year history of white UWS parents blocking integration efforts, including a particularly vitriolic chapter that has taken place over the last 3 years. Research history of PS 199/191, this is not one parent.’ 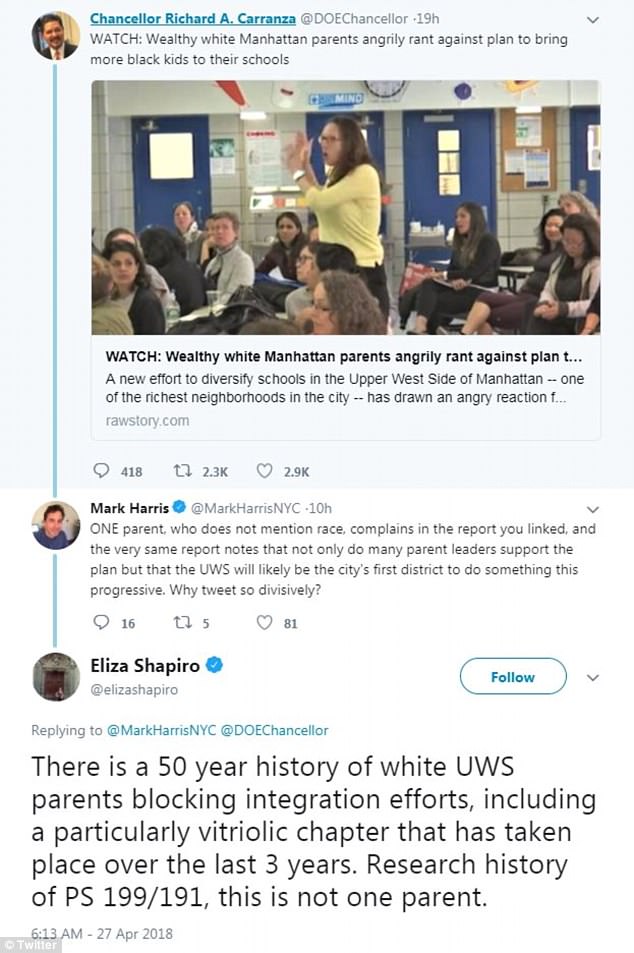 Carranza said, ‘I don’t engage in Twitter fights,’ but he didn’t have to, because high profile social media users brought facts to an ensuing debate in this comments 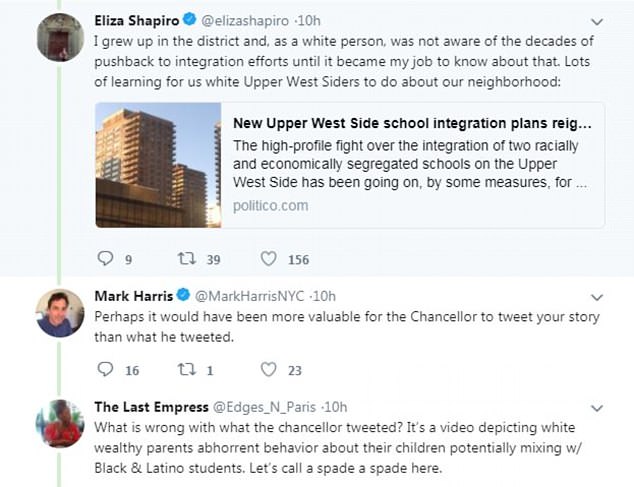 Shapiro continued: ‘I grew up in the district and, as a white person, was not aware of the decades of pushback to integration efforts until it became my job to know about that. Lots of learning for us white Upper West Siders to do about our neighborhood.’

With that post, she included a link to a story she wrote for Politico in October 2016, diving tensions at that time over integration.

Harris then doubled down on his criticism of Carranza’s choice of tweeting, replying, ‘Perhaps it would have been more valuable for the Chancellor to tweet your story than what he tweeted.’

Others engaging in the back and forth also kept things relatively civil, by Twitter reaction standards.

One user with the handle @myula11218 wrote, ‘You know you represent these parents as well, right?’

To that, a person writing under username @jilltataraworld replied, ‘I’m not sure what you’re saying here exactly. How do you think he should go about desegregating our schools? Is there a way to do it while keeping these parents happy? (My guess is no).’

At this urge to clarify the comment, the user @myula11218 backed down, writing, ‘You are right. No easy way forward, takes courage for sure.’ 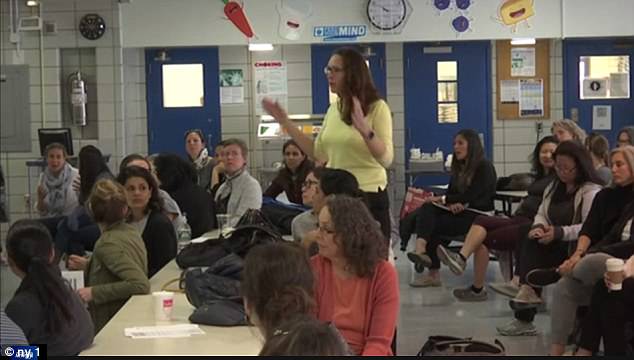 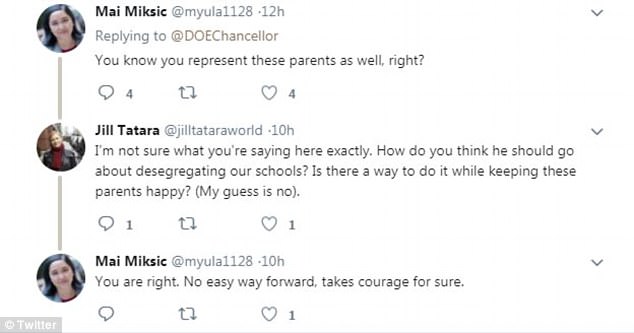 Others engaging in the back and forth also kept things relatively civil, by Twitter standards 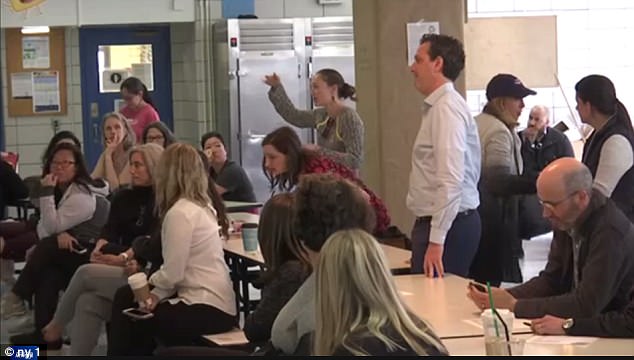 In the video included in the story the chancellor tweeted, one parent can be heard rallying against what she felt would result in hard-working young people being shut out of the most desirable schools, if the plan moves forward to save one quarter of seats for students scoring lower on state exams

‘This is a conversation that’s happening everywhere,’ Carranza said, on the topic of the need for socioeconomic and racial diversity in classrooms.

In the video included in the story the chancellor tweeted, one parent can be heard rallying against what she felt would result in hard-working young people being shut out of the most desirable schools, if the plan moves forward to save one quarter of seats for students scoring lower on state exams.

The meeting where this opinion was shared was held on Tuesday at PS 199, one of New York City’s whitest schools, despite desegregation measures put in place after a bitter fight two years ago. 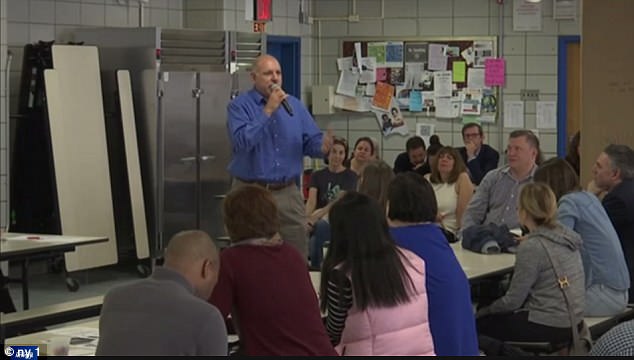 Middle school principal Henry Zymeck said he was upset by the parents’ reaction.

‘There are kids that are tremendously disadvantaged,’ he said. ‘And to compare these students and say, “My already advantaged kid needs more advantage, they need to be kept away from those kids,” is tremendously offensive to me.’

Many parents leaders, as well as almost all of the principals in the district, however, support the plan, which would make PS 199 the first to enact the new plan to increase diversity in its classrooms.

The chancellor noted he supports diversity in schools and doesn’t believe working toward achieving that goal will cause other students to suffer.

‘There’s a way to have these difficult conversations,’ he said. ‘As the chancellor, I am who I am and I am a man of color.’

Carranza became chancellor in early March, less than one week after Miami schools superintendent Alberto Calvalho, backed out of the position while on camera, on the same day his hiring was announced. 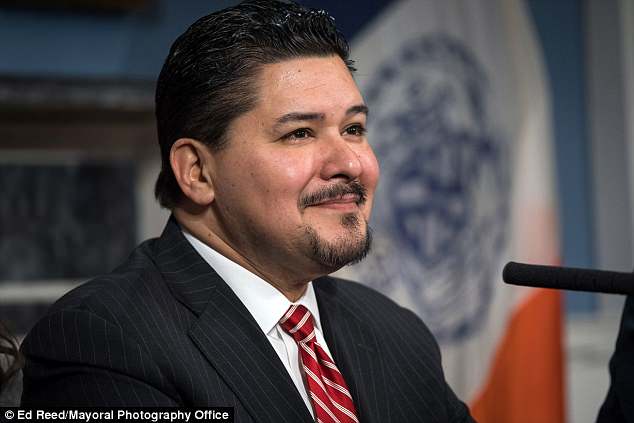