New York City teachers are planning a mass walkout on Wednesday after Mayor Bill de Blasio defied pleas to shut down the city’s public school system amidst the coronavirus outbreak.

On Saturday, de Blasio stated that the Big Apple’s 75,000 teachers and 1.1. million students would still be required at schools, despite the soaring number of coronavirus cases in the metro area.

Educators and their allies quickly took to Twitter to blast the mayor, and the hashtag #UFTStrikeMarch16 began trending on the site.

The UFT (The United Federation of Teachers) boasts more than 180,000 members, with many saying they’re willing to call out sick on Monday in defiance of the mayor’s order to keep schools open.

Many teachers began sharing their anxieties about continuing to work – claiming that public transport commutes and the close proximity of thousands of students make schools vulnerable to the spread of COVID-19.

‘I am a elementary teacher in the Bronx. I am pregnant. Being that I am pregnant my immune system is more susceptible to COVID-19. I do not feel safe returning to work. Why do I have to risk mine and my baby’s well being in order to keep my job?’ one wrote.

Another stated: ‘I’m a kindergarten teacher that spend 3 hours per day to commute from Queens to deep Brooklyn on Long Island Rail Road and MTA (subway). If I got infected I will pass to my students and their parents and even kill their grandparents! Don’t put our educators and kids in danger!’

Meanwhile, the concerned spouse of one educator wrote: ‘My wife is a NYC teacher not a baby sitter. I have medical conditions that would make Covid-19 deadly for me. Please allow her to stay home so she won’t have to risk killing me to keep her job.’

Also on Saturday, several teachers from the elite public Stuyvesant High School in downtown Manhattan penned an article in The New York Times calling for the closure of all public schools in the metro area.

‘Our students are distracted and terrified,’ they wrote, adding that coronavirus ‘is a threat to our global mental health’. 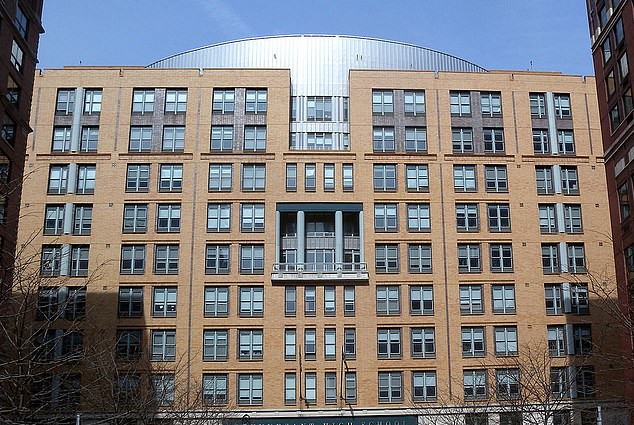 Also on Saturday, several teachers from the elite public Stuyvesant High School in downtown Manhattan penned an article in The New York Times calling for the closure of all public schools in the metro area 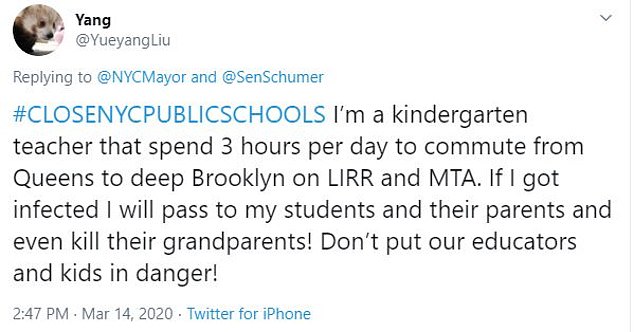 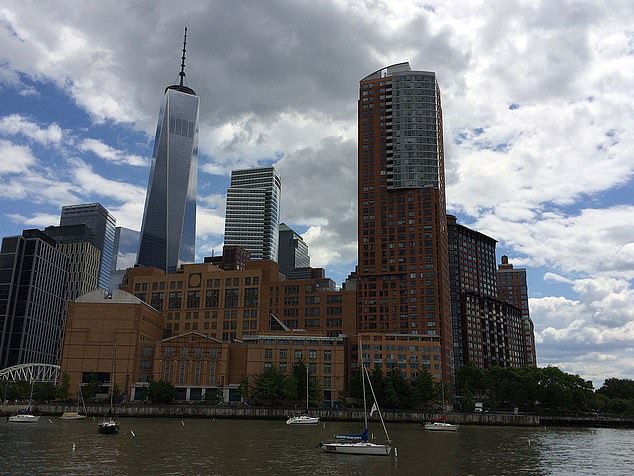 ‘No amount of hand washing and extra cleaning can prevent our thousands of students and hundreds of faculty and staff members from transmitting germs as they move in and out of classrooms for 10 periods a day,’ the teachers continued.

‘Many of us worked through Sept. 11, 2001, as the World Trade Center was toppled across the street, walked to school during the transit strike, and did not miss a day during Hurricane Sandy. This is different’.

de Blasio’s refusal to close the public schools comes despite new research from the CDC (Centers for Disease Control), which claim that long-term school closure could help stem the spread of coronavirus.

‘Modeling data for other respiratory infections where children have higher disease impacts, suggests that longer closures (between eight and 20 weeks)  may have greater impact in terms of reducing overall transmission. Provides substantial protection for older staff and students and staff with underlying medical conditions’.

UFT President Michael Mulgrew told The New York Post that he appealed Mulgrew to de Blasio to meet and discuss school closures – but the mayor has denied the request. 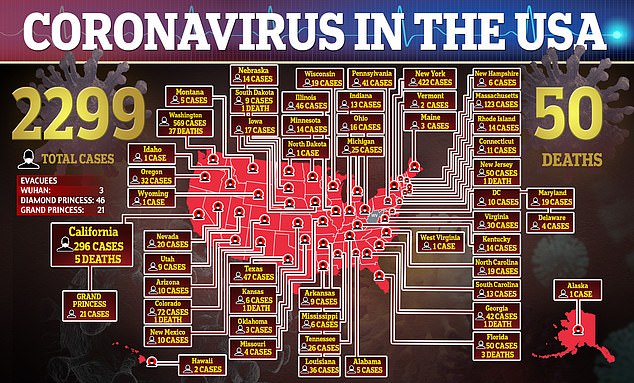 There are now more than 2,200 cases of coronavirus in the US and 50 people have died

Earlier this week, de Blasio said he was trying to avoid closing schools city-wide because it was a ‘slippery slope’ to creating chaos in the city.

Additionally, half of the city’s children rely on school meals.

Gov. Cuomo also said on Friday that children, even when they get the virus, are not particularly susceptible to it.

Attendance fell from 85 percent on Thursday to 68 percent on Friday across New York City.

One parent told the Post they were not going to wait for public officials to tell them what to do.

‘Sometimes you can’t wait for other people to make decisions. You have to make them for yourself,’ they said.

Some private schools have decided to close themselves.

Schools in L.A., San Francisco, Chicago and Philadelphia are closed or are due to close next week.