NYC urges residents to MASK-UP for RSV, Flu and Covid

BREAKING: NYC urges residents to MASK-UP again to prevent the spread of RSV, flu and Covid

New York City officials are once again advising residents to mask up to prevent the spread of respiratory illnesses like Covid – but even the flu and respiratory syncytial virus (RSV).

Dr Ashwin Vasan, commissioner of NYC Health, issued an advisory today urging the use of face coverings in indoor public places. It is not a mandate and will not be enforced by city officials – but some private businesses may choose to follow it.

A media release cites the surge in Covid, RSV and the flu striking the city. The Big Apple is currently recording 3,761 daily Covid infections, a 55 percent increase over the last two weeks. The city confirmed more than 11,000 flu cases during the final week of November.

The move follows recommendations from the Centers for Disease Control and Prevention (CDC) to mask up to prevent non-Covid respiratory viruses earlier this week.

America has been struck with massive flu and RSV surges this season. It has been described as the worst flu season since the 2009 Swine Flu pandemic. More than 80 percent of hospital beds in the US are currently in use as a result of the surge – a figure higher than it was at any point during the pandemic.

NYC health officials are recommending that residents wear masks in indoor public places and outdoor crowded places to prevent the spread of RSV, the flu and Covid (file photo) 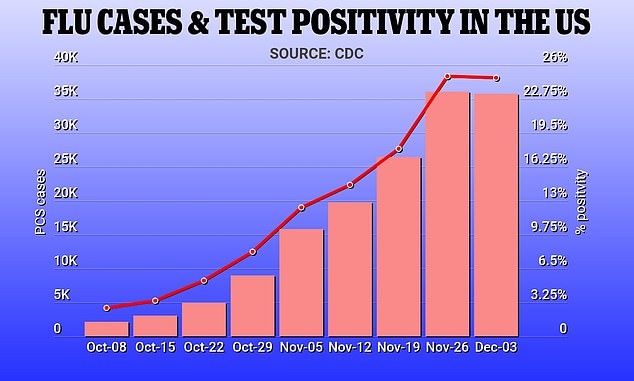 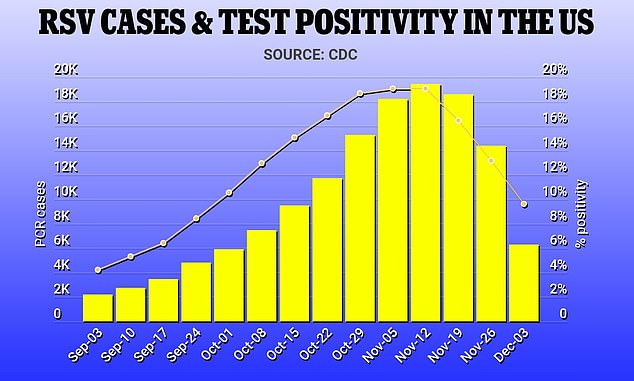 Hospitals in the US are more full now than throughout the pandemic — and it’s not because of Covid.

Official data shows that 80 percent of beds nationwide are currently occupied, a level not reached since the peak of the Covid surge in January 2022, when eight in 10 beds were also full, primarily due to the Omicron variant.

This time, however, flu and respiratory syncytial virus (RSV) are driving the pressure on hospitals, with large portions beds filled by patients with the seasonal infections, according to Department of Health and Human Services (HHS) data.

Covid restrictions largely sidelined those viruses for more than two years and robbed Americans of vital exposure to germs that strengthen their immune systems – making the fresh surges deadlier than usual.

Combined with Covid, the viruses have created a tripledemic. Centers for Disease Control and Prevention (CDC) officials even recommended Americans to mask up to prevent the spread of non-Covid illnesses earlier this week.

‘Today [Dr Vasan] issued an advisory as NYC faces high levels of COVID-19, flu and RSV,’ the agency wrote in a tweet.

The order piggybacks off of the CDC’s advice earlier this week. Dr Rochelle Walensky, director of the agency, said during a briefing Monday: ‘we also encourage you to wear a high-quality, well-fitting mask to prevent the spread of respiratory illnesses’.

Nationwide, America recorded 35,704 confirmed cases of the flu during the week that ended on December 3.

This is a slight decrease from the 35,993 recorded a week earlier – the first time weekly cases have declined since the start of flu season.

The agency also reports that 25 percent of tests for the flu are coming back positive – matching the total from the week before.

New York City is designated as an area of ‘very high’ flu transmission by the CDC, and is given the most severe classification.

In its most recent report on the flu, more than 11,000 cases were confirmed in the city during the week ending on November 26.

The tally more than doubles the previous week’s total of 5,500 confirmed infections.

In total, the CDC considers 26 states to be areas of ‘very high’ flu circulation – a drop from the 44 states that received the classification last week.

This signals that the flu may be burning out after rampantly spreading across the US over the past three months.

Experts have said that this flu season started earlier than those in year’s past, so it could have potentially peaked in early-December – while it usually peaks at the end of the month.

This is developing story and will be updated