A New York City woman decided to pack up her things and move in with a guy in Connecticut — after just two dates.

Carrie Lee Riggins had been talking to a guy she met on Bumble for weeks when they finally had their first date on March 7, she told NPR. It went incredibly well, starting with lunch and moving on to a fancy dinner before inspiring a second date shortly after.

But as Carrie, a ballet dancer, saw the situation growing increasingly worse in New York, she made the impromptu decision to move up to Connecticut to stay with him during quarantine.

Moving fast: Carrie Lee Riggins, from New York City, met a man from Mystic, Connecticut on Bumble in February. They went on their first date in NYC on March 7, which lasted hours

Appearing on NPR’s 1A, Carrie explained how the pair met on Bumble in mid-february and ‘had lovely conversations’ before eventually making a plan to meet.

Her new beau lives about two and a half hours away from New York City in Mystic, Connecticut, but they planned for him to come visit her on February 22.

But they didn’t get off to a great start: When she called to confirm that morning, he told her he thought their date was the following week, and he was on a trip to Arizona.

That’s how their first date was postponed until March 7, when the pandemic had really started looking serious in the US.

Carrie said the two first met for lunch, and it went so well that they had dinner that same night at the upscale Manhattan restaurant 11 Madison Park. 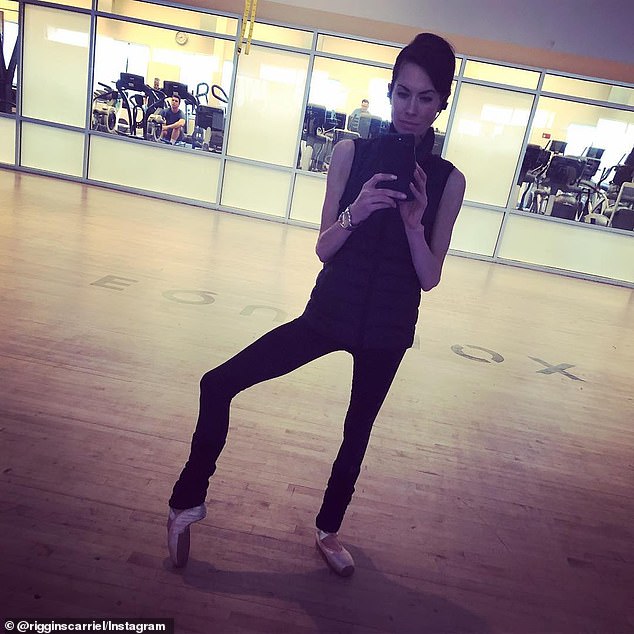 Committed: The ballet dancer drove over two hours to Mystic to see him for a second date, and moved in with him the next day 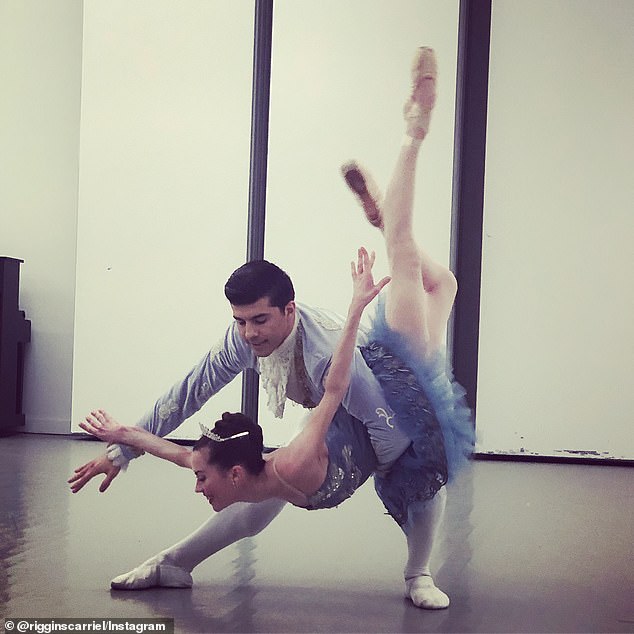 ‘I put everything in my car — my cat, my sewing machine, and two weeks’ worth of clothes — and I just jumped into the downstairs bedroom of the condo!’ she said

The two hit it off, and for their next date, Carrie made the trip up to see him.

‘Ultimately, I ended up driving up to Mystic to see where he lived,’ she said.

‘And the following day, I put everything in my car — my cat, my sewing machine, and two weeks’ worth of clothes — and I just jumped into the downstairs bedroom of the condo!’ she added, admitting she ‘definitely [put the] cart before the horse.’

Carrie explained that the situation in New York was just looking too bleak, but her new guy had plenty of space, including an extra bedroom. Plus, it seems, they weren’t ready to give up on seeing each other so soon.

‘The whole concept of what was happening in New York City, with the lines for the grocery store wrapping around the block, beginning to see people walking around in masks… the reality of it had begun to sunk in and I definitely just didn’t want to be alone,’ she said.

‘He felt like a nice guy and I’d already scoped out the living situations.’ 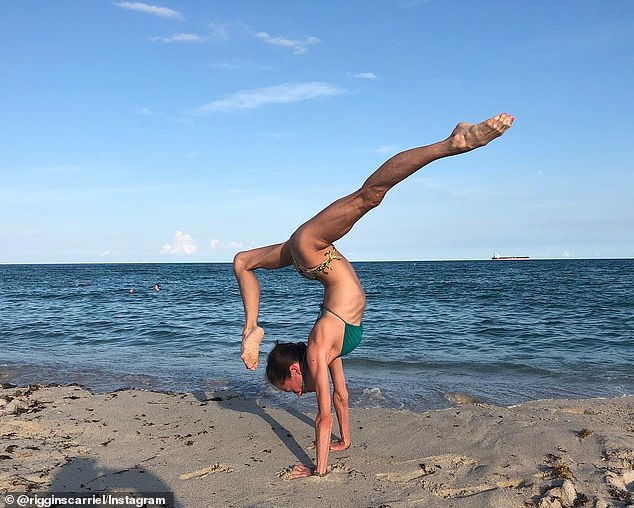 Getting away: Carrie said she made the move after being scared by how the situation was worsening in New York City

Now they each stay in their own rooms, but meet in living room for ‘dates.’

They are ‘treading lightly,’ with her new beau still trying to be romantic despite their unusual circumstance.

She said that once he tried to buy her flowers, but couldn’t find them at the grocery store. She told him, ‘But you have toilet paper! These are the things that you triumph over!’

They’re still navigating day-to-day life, like how to make dinner together and what to watch on TV. They have different tastes, so like most couples, they watch a bit of each person’s preferred shows.

They’ve now been living together for nearly a month, and Carrie hasn’t indicated any trouble in paradise. 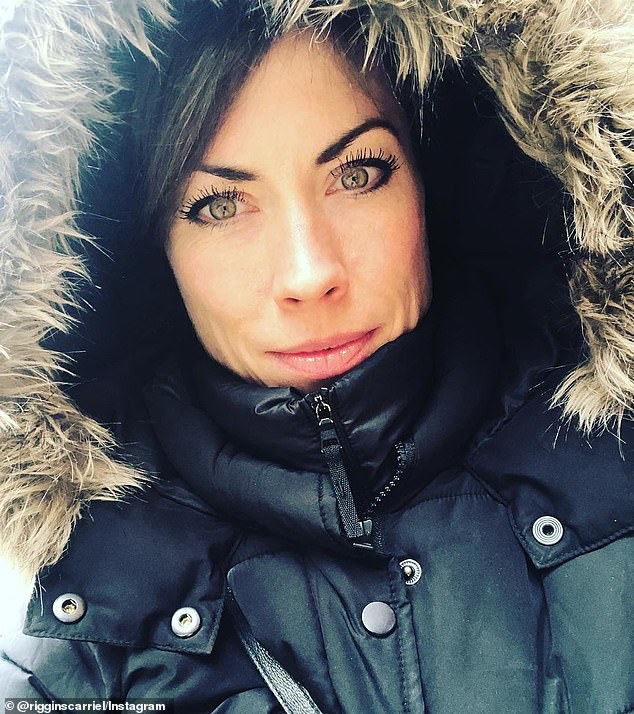 Romance: Now they each stay in their own rooms, but meet in living room for ‘dates’

Meanwhile, Nick Crawford, 23, told MarketWatch that he and an unidentified woman also went out for the first time on March 7 — and within days, both were experiencing flu-like symptoms and told to self-isolate at home.

But in this case, it wasn’t just the virus that was infectious: Despite one possibly infecting the other, Nick and the woman liked each other so much that they’ve continued to date, and even met up several times a week while quarantining.

Nick, a web designer, said that he and the woman, who wished to remain anonymous, matched on Hinge and started chatting before making a plan to meet on March 7.

‘At that point, coronavirus wasn’t even a real threat. It didn’t feel real yet,’ Nick said.

There had, in fact, already been cases in the US, and experts warned that it would spread quickly. However, the President was still calling the virus a ‘hoax’ at that time, and social distancing protocol had yet to have been adopted int he US. 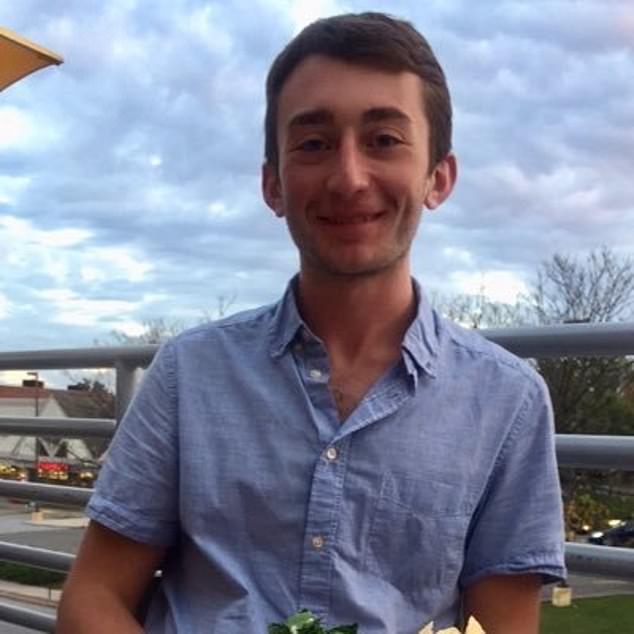 How they met: Nick Crawford, 23, said he and an unidentified woman went out for the first time on March 7, and within days, both were experiencing flu-like symptoms

It was also still more than a week before New York closed bars and restaurants, so Nick and the woman had no trouble finding a place to go out.

The pair went to several bars in Brooklyn that night, and even met up with friends.

Shortly after they went out, Nick began to feel flu-like symptoms. He visited an urgent care clinic and tested negative for the flu, but doctors wouldn’t give him a COVID-19 test, telling him that there weren’t enough.

Meanwhile, his date also experienced flu-life symptoms, too. She has taken a test but is still awaiting results.

But a friend they met up with that night did test positive for COVID-19, seemingly confirming that the virus is the source of their illness, while also suggesting that they both contracted the coronavirus during that first meeting.

‘I guess at one of the bars we went to, both of us ended up contracting what we would later find out is COVID-19,’ Crawford said. 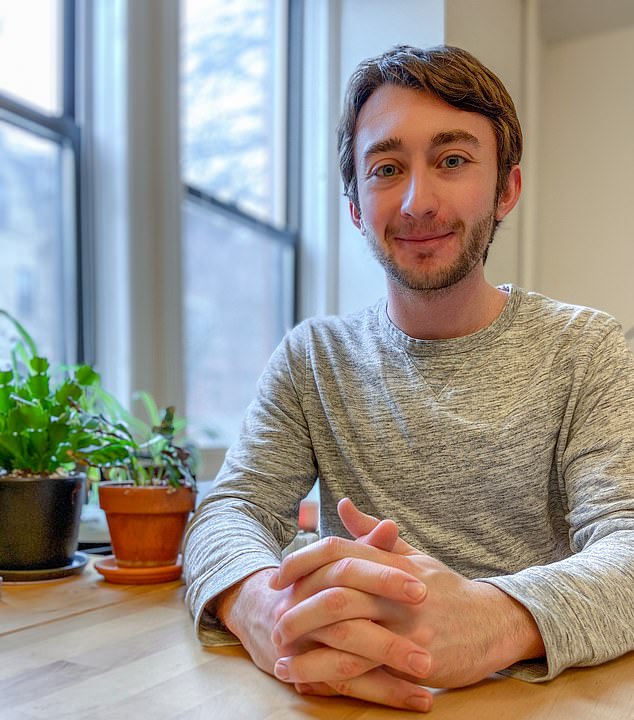 Hiding away: Nick couldn’t get a COVID-19 test, but a doctor told him he probably had it and should self-isolate

What self-isolation? The couple apparently hit it off, though, and have continued to see each other

That’s not necessarily the case, though — either Nick or his date may have already contracted the virus before the date, but remained asymptomatic, and given it to the other.

Still, while Nick didn’t actually get tested, his doctor said he probably had COVID-19, and urging him to self-isolate.

Even if he did get it from his date, Nick said there are no hard feelings.

‘I don’t blame her at all. We both had a really fun time together on our first date,’ he said.

In fact, the pair are still seeing each other, and Nick tweeted on Thursday: ‘Looks like I caught more than just feelings during this pandemic.’

‘We have spent a lot of time together since then, quarantining together,’ he added to MarketWatch, indicating that they’ve met up two or three times a week while supposedly self-isolating.

He thinks they may have a future together, too.

‘I’d probably tell my grandkids the story of how we met,’ he said.