NYPD officers have been accused of discrimination, after apparently heavily enforcing social distancing rules in parks in the New York’s poorer Bronx area, while crowds gathered unchallenged in the wealthier Manhattan borough.

Officers were seen enforcing coronavirus restrictions during this weekend’s warmer weather but appeared to take a less aggressive approach in Manhattan.

Blogger Ed García Conde couldn’t help notice the difference after posting an image of cops in a van patrolling St. Mary’s Park in the South Bronx on Saturday, making sure people were social distancing as required.

He pointed out that the enforcement worked in keeping the normally crowded park more on the empty side, despite the warm weather.

But Conde contrasted the scene with the crowds seen in Christopher St. pier in Manhattan’s West Village the same day.

Blogger Ed García Conde wrote that he spotted a van patrolling St. Mary’s Park in the South Bronx on Saturday, but that enforcement was less aggressive in other more affluent parts of the city.  Pictured are cops on patrol as they drive through the park 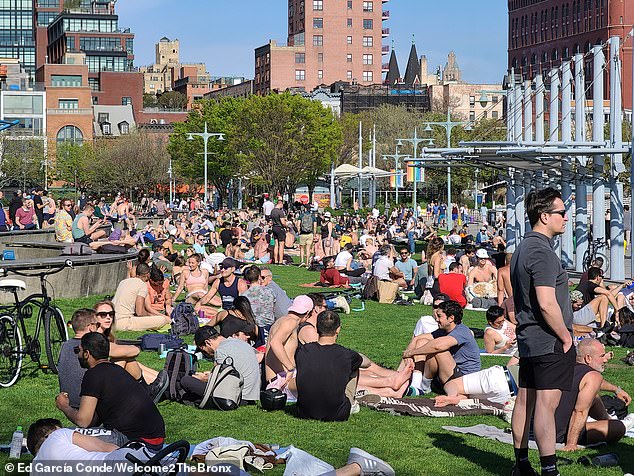 Photos from the pier, taken by Conde, showed it was packed with sunbathers close to each other.

Scenes taken the next day show a similar crowd and an officer calmly passing out face masks, reports Yahoo News.

‘I guess in the police force’s eyes, people of color need to be policed,’ Conde said in an interview with Yahoo News. ‘We need to be told what to do.’

The blogger’s observations reveal the stark contrast in enforcement between New Yorkers in relatively affluent, predominantly white communities in the city and neighborhoods in the Bronx that are predominantly Latino and black.

‘To me it was very disturbing,’ Conde said.

‘It’s glaring. Just the audacity, the privilege that these people were exhibiting on the pier when almost 20,000 people have died in New York City from this alone. We are the epicenter. But then it doesn’t surprise me because, you know, between Manhattan and the Bronx, we know this is a tale of two cities.’ 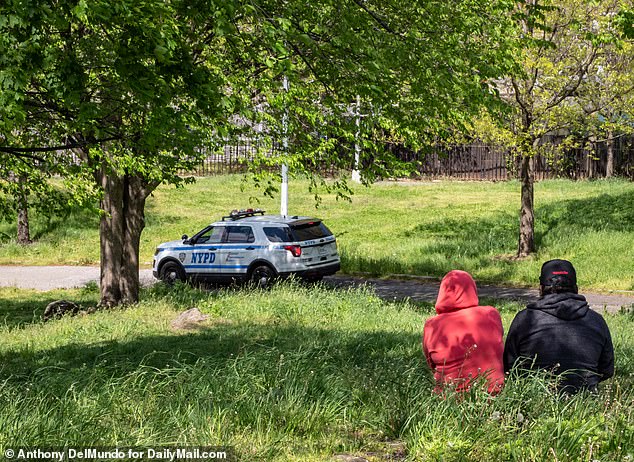 Police were still seen patrolling at the relatively empty St. Mary’s Park in the South Bronx on Thursday, in these Daily Mail photos 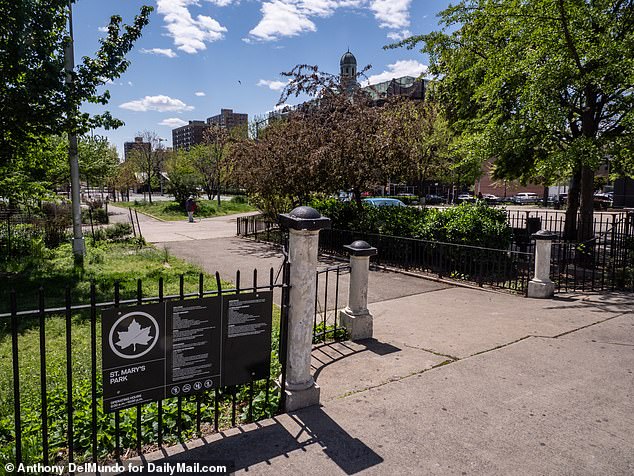 The Bronx park was deserted despite the hot weather, in contrast to parks in Manhattan 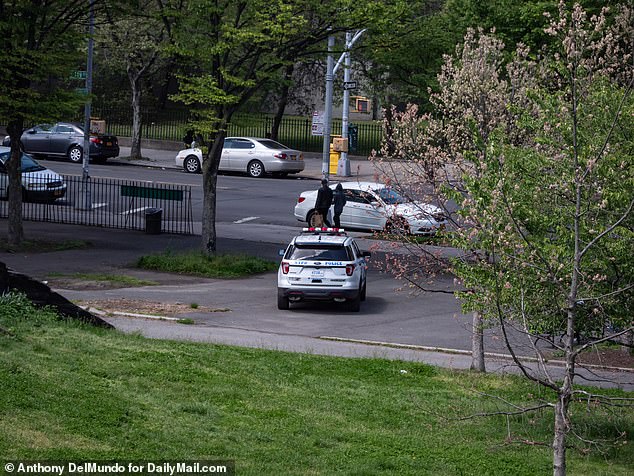 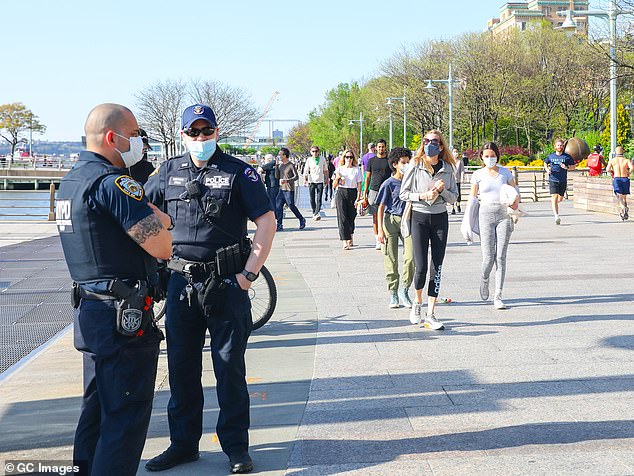 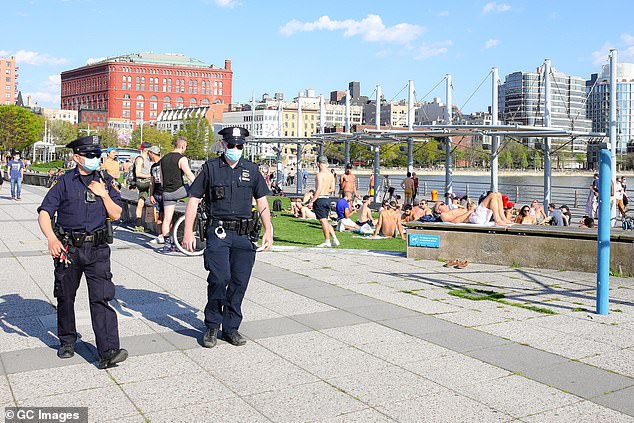 The NYPD released a statement when asked about the policing in different areas, saying: ‘We are absolutely committed to being as transparent as possible. [We] would anticipate releasing quite a bit of information detailed down to the precinct level, possibly even [down to] different parks.’ 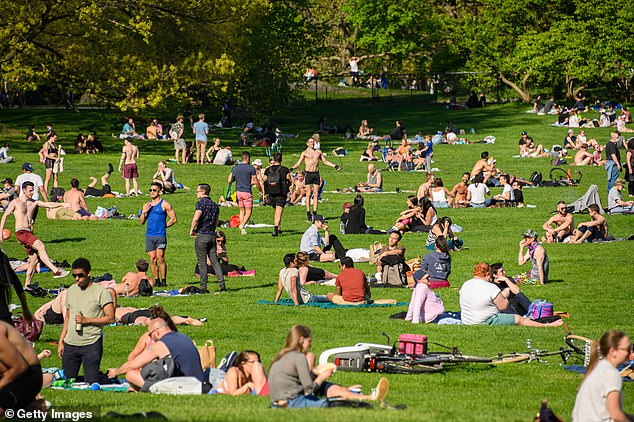 A campaign to distribute 7.5 million face masks to New Yorkers began Saturday and is expected to continue for weeks.

But almost by the middle of this week, certain communities in the city still appeared to have been left out, including south Brooklyn, the East Bronx and Queens, Yahoo News reports.

The communities include some of the hardest hit in the city by the coronavirus pandemic, drawing criticism from Brooklyn lawmakers.

‘This glaring omission leaves out more than a million southern Brooklynites — including many essential workers, senior citizens, non-English speakers, individuals with high-health risks and NYCHA [New York City Housing Authority] residents — without access to a protective face covering,’ wrote Rep. Jerry Nadler, a Democrat representing parts of Manhattan and Brooklyn, as well as Brooklyn Borough President Eric Adams and with 15 other elected officials.

‘As long as the city will require everyone to wear a face covering as part of social distancing protocols, then the city must ensure that it makes every possible effort to provide access to face coverings for all New Yorkers, not just a select few.’ 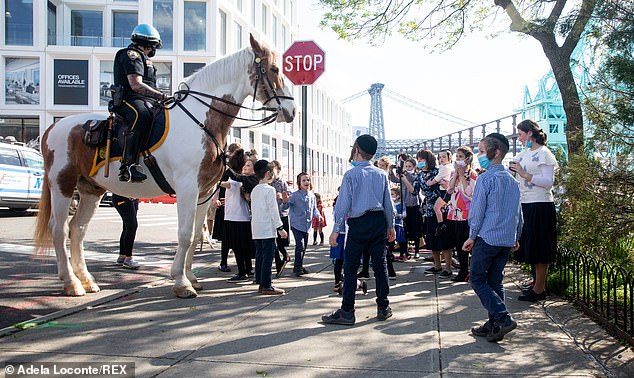 A mounted officer speaks with a group of children, not all wearing masks, and gathered tightly together at Brooklyn’s Domino Park in Williamsburg, Brooklyn. 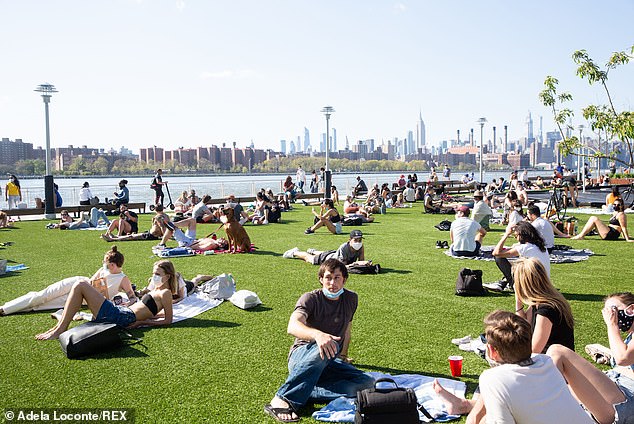 An image at Domino Park in Williamsburg, Brooklyn, this weekend shows New Yorkers sprawled out on the grass and no police in sight 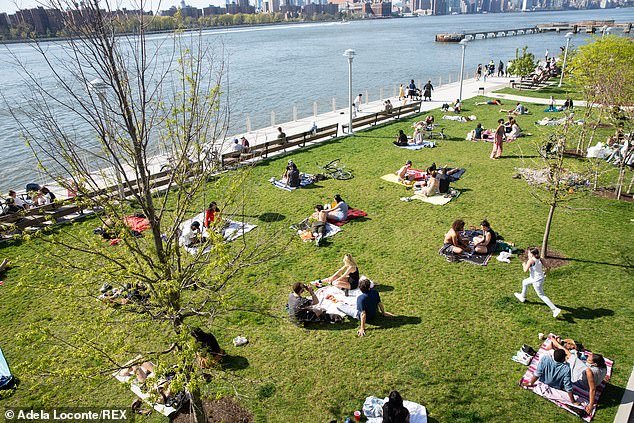 Public Advocate Jumaane Williams said he wants to know where masks have been distributed by ZIP code and demographics after he failed to see them in his community.

‘At this point I believe they’re purposely not putting out information because it’s going to show what all of us know: Primary enforcement has been in black and brown communities, even though we see pictures and videos of people in all communities not adhering to social distancing,’ Williams said.

‘We shouldn’t have one policing style for one community and another for a different [one].’ 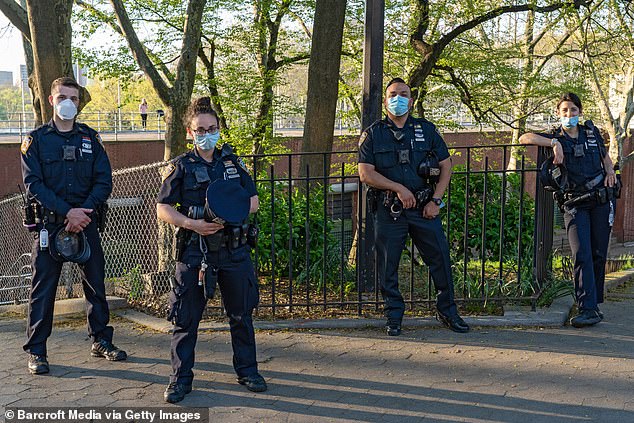 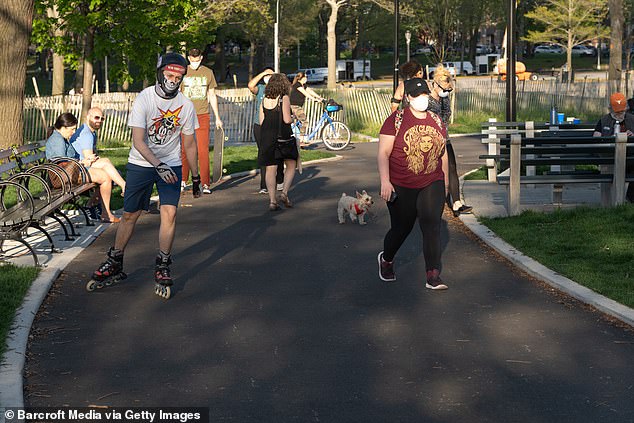