People coming from near and far to celebrate New Year’s Eve in Times Square can rest assured that security will be amped up, with the New York Police Department deploying a drone to oversee the event for the first time.

The NYPD will tether the department’s drone atop a building in Times Square, with an area below it will be secured in case it falls from its position, Chief of Department Terence Monahan said at a press conference discussing planned security measures for December 31.

The additional security may be due to estimates of as many as two million expected attendees, which crowd-size experts are dismissing as over inflated by city officials and event organizers.

People coming from near and far to celebrate New Year’s Eve in Times Square can rest assured that security will be amped up, with the New York Police Department deploying a drone to oversee the event for the first time. Officers are shown scanning a partygoer in Times Square prior to New Year’s Eve celebrations on December 31, 2017 in New York City

The crowd estimates come from the New York City Police Department, according to the Times Square Alliance, which runs the ball drop.

In recent years, the department estimated that two million people had packed into Times Square.

Mayor Bill de Blasio used the big number again on Friday, saying the city expected ‘up to 2 million people in Times Square itself,’ which is a bow-tie-shaped zone running five blocks between Broadway and 7th Avenue. 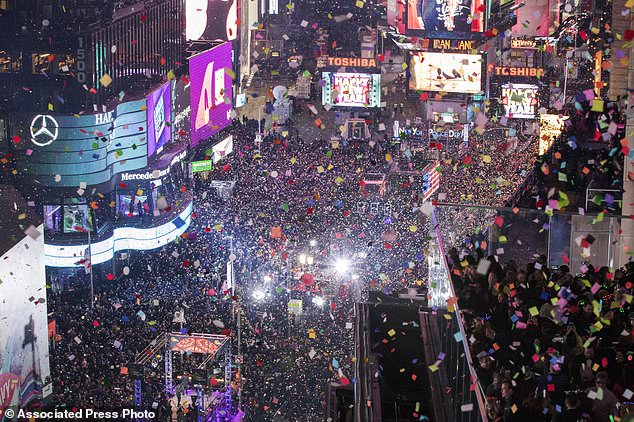 Police are planning for 65 such pens this year, stretching well north of Times Square proper. In this January 1, 2017 file photo, revelers celebrate the new year as confetti flies over New York’s Times Square

New York University professor Charles Seife, a mathematician and journalist who explored statistical manipulation in his book ‘Proofiness,’ said the city has an interest in promoting a bigger number because it ‘helps cement the image of New York City as the center of the universe at a certain date and time.’

He suggested fuzzy math and fuzzier geography were also at play.

‘How do you count a participant in the Times Square ball drop?’ Seife asked.

‘Is it everyone who can see the ball, or anyone squeezed into a bar in Manhattan?’

To actually fit one million revelers, the city would have to jam more than the equivalent of a sold-out Yankee Stadium on every block of 7th Avenue between Times Square and Central Park – which starts about 15 blocks to the north.

Still and his colleagues perform detailed analyses when calculating precise crowd totals. But even using simple techniques, like measuring Times Square on a map and running a few calculations, it’s clear the numbers don’t get anywhere near one million.

Those numbers don’t count people watching from hotel and office building windows or from penned-off areas farther away. They also don’t account for space taken up by stages, security apparatus and egress routes, where people would otherwise be able to stand but definitely won’t have access to on New Year’s Eve. 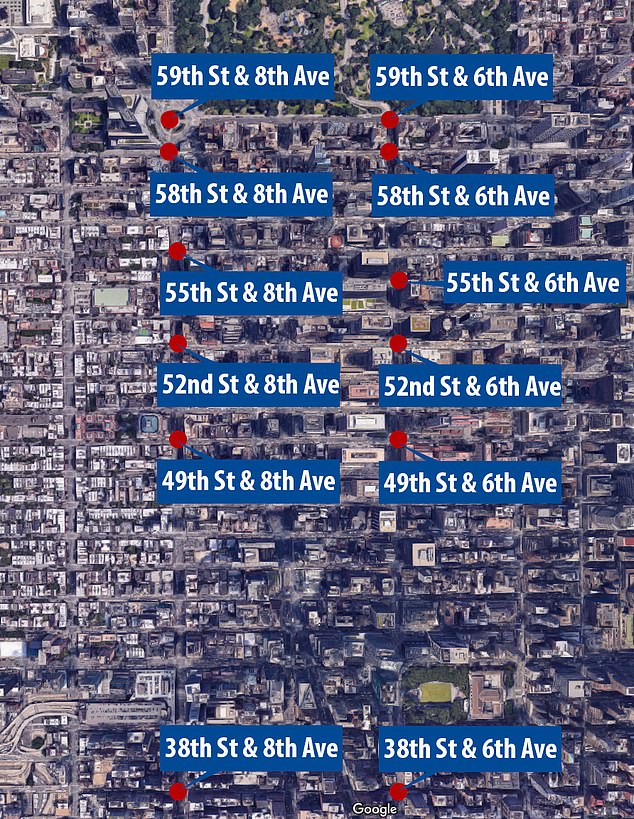 Those wishing to be at the center of it all when the year 2019 begins can enter one of the pens at the intersections of 38th, 49th, 52nd, 58th and 59th streets at both Sixth and Eighth avenues, at 54th St. and Sixth Ave, and at 55th Street and Eighth Ave

New York’s crowd estimate has evolved over time. As late as 1998, the police department was estimating that roughly 500,000 people attended. But for the millennium bash at the close of 1999, Mayor Rudolph Giuliani predicted as many as two million, which seems to be the consistent estimate to date.

At big events, an accurate crowd estimate is critical to public safety. The wrong number can leave cities devoting too many or too few resources to an event, Still said.

But New York – despite inflating the size of its crowd – manages the throngs well, funneling revelers into penned off areas, so there’s no opportunity for overcrowding, and they can screen each person for weapons.

Police are planning for 65 such pens this year, stretching well north of Times Square proper. To get one million people into those 65 pens, each would have to fit around 30,800 people.

Regardless of the number of people in attendance, everyone is expected to be well secured, thanks to the use of the drone, which apparently will not fly.

Others, however, will not be able to fly drones of their own, either.

A change in federal laws in September has allowed officials to curtail that option for those who wanted a view of the ball dropping without braving the cold for hours on end.

The NYPD said it will be using anti-drone technology to ensure people comply with the ban, without sharing details about exactly how it worked.

‘Don’t fly a drone that night,’ Police Commissioner James O’Neill said. ‘If you do fly one, there’s a good chance you’re going to end up getting arrested.’

‘As in years past, those attending the celebration in Times Square will be screened,’ the department said in a press release on Friday.

The city has encouraged use of public transit due to the many street closures beginning at 4am on December 31.

The NYPD has provided a comprehensive list of those, which is available here.

Those wishing to be at the center of it all when the year 2019 begins can enter one of the pens at the intersections of 38th, 49th, 52nd, 58th and 59th streets at both Sixth and Eighth avenues, at 54th St. and Sixth Ave, and at 55th Street and Eighth Ave.

Anyone who sees suspicious activity should alert a police officer or call 911.