A novel called ‘Handbook for Mortals’ had a very brief reign at the top of a New York Times best-seller list.

The paper confirmed Friday that it had pulled Lani Sarem’s debut book from its young adult hardcover list for September 3,  because of ‘inconsistencies’ in the reporting of sales.

The announcement comes after online complaints that ‘Handbook for Mortals’ had benefited from so-called ‘bulk sales,’ when hundreds or thousands of copies are ordered by a single buyer. 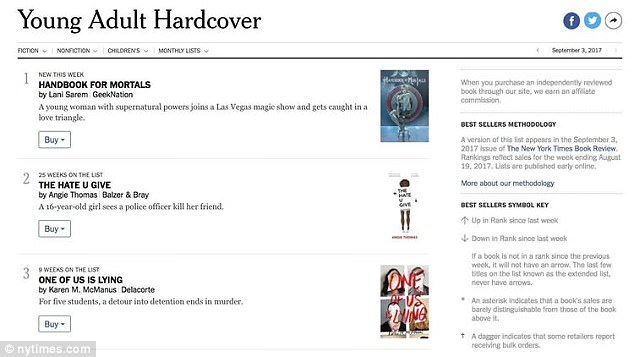 The unexpectedly high ranking for a first-time author at a previously unknown publishing house created internet controversy, leading to questioning of apparent bulk orders of her book, which were seen as being a way to cheat the book’s way onto the list

Sarem, a first-time author for the newly minted publishing arm of genre website GeekNation, landed in the No. 1 spot on the YA bestseller list, seemingly out of the blue, sliding in over Angie Thomas’ critically-acclaimed ‘The Hate U Give,’ which has been steadily working its way up the list since February.

When the September 3 bestseller list was released, YA e-book author Phil Stamper questioned how it was possible for Sarem to best Thomas’ novel so quickly, so he did some research and posted about it on social media.

He told the Los Angeles Times that not only did ‘Handbook for Mortals’ have ‘zero publicity,’ but that he ‘couldn’t find one person who had ever heard of this author, this title, or the publisher.’

‘Handbook for Mortals’ appears to have been announced to the public on July 28 and released just weeks later, on August 15. The fantasy novel is about a young woman with actual magical powers who joins a Las Vegas magic act.

In an effort to uncover what happened, Stamper and other curious bookworms shared information with each other, including an anecdote revealing that at least one book store had received a bulk order for ‘Handbook,’ but only after having been asked if they were a New York Times list-reporting outlet.

Following the controversy, the New York Times pulled Sarem’s book and reissued the September 3 list, reflecting Thomas’ book in the No. 1 position.

A New York Times spokesperson told THR that Sarem’s book was removed from the YA hardcover list because ‘the sales for Handbook for Mortals did not meet our criteria for inclusion.’

Sarem told THR she believes her book, which ‘did some great numbers,’ was pulled from the list because the New York Times capitulated to the social media controversy. 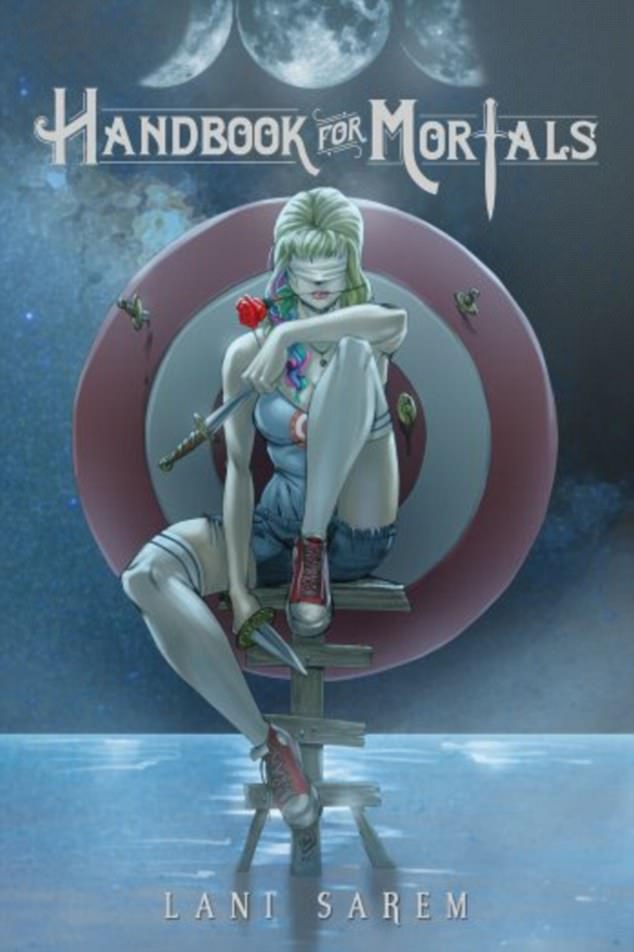 Friday, the New York Times re-released its bestseller list, removing Sarem’s book from the list due to ‘inconsistencies’ in the reporting of its sales

‘When these people made a big issue, they were like, “This is too much effort,”‘ she said of the New York Times, adding that it was ‘disheartening’ to have had Stamper and others questioning the legitimacy of her book’s success purely because they had never heard of it before.

Sarem maintained that she, actor/producer Thomas Ian Nicholas and her husband, GeekNation founder Brian Keathley, had been promoting ‘Handbook’ all year at comic cons and by doing interviews with local radio and bloggers. She also said that since the vision was to turn her novel into a movie and a ‘multi-platform property,’ there wasn’t any need to follow ‘traditional marketing strategy’ while launching her book.

Although Sarem denied any knowledge of her book being bulk ordered in an effort to land the top spot on the bestseller list, Nicholas — who would star and produce in the hoped for film adaptation — admitted that independent bookstores were contacted in an effort to bulk buy the book so Sarem and Nicholas could bring copies of the book with them to local comic cons in the fall.

Nicholas, who starred in the ‘American Pie’ movie franchise, claimed that nobody was asked to specifically reach out to stores that reported to the New York Times and that no effort was made to bulk buy the books specifically with the intention of landing on the bestseller list.

Sarem told THR that the bestseller list controversy was a ‘witch hunt’ and seemed to compare what happened with her book to the negative reception EL James’ ‘Fifty Shades’ trilogy initially received, because it didn’t have a traditional path.

It’s unclear how many books need to be sold in order to be included in the New York Times bestseller list, but the LA Time said that estimates put the figure in the low thousands.

In the past, when bulk orders seemed to push books into the list, it has been accordingly noted alongside the book’s entry, which didn’t appear to have been the case with ‘Handbook.’

According to a post by someone who was digging into the Sarem book controversy, Nielsen BookScan, which tracks book sales, indicated that more than 18,000 copies of her book had been ordered.