NZ has under 30,000 coronavirus vaccine doses left and admits it may run out of Pfizer next week

Running out of time: New Zealand has less than 30,000 Covid vaccines left and admits it will run out next week

New Zealand’s coronavirus vaccine supplies have dwindled, amid fears Australia’s Trans-Tasman neighbour could run out within a week.

Prime Minister Jacinda Ardern says she cannot guarantee her country will have any vaccine doses beyond next Tuesday if Pfizer doesn’t stick to its agreed delivery shipment of 150,000 doses scheduled to arrive next week.

New Zealand solely relies on Pfizer for its vaccine rollout as available doses for distribution drop below 30,000.

‘We’ve planned based on what we’re due to receive from Pfizer. If we receive what we anticipate when we anticipate it, then we’ve got a plan,’ Ms Ardern said.

‘If there’s any slip in the timeline of those deliveries, they will be an effect … things will be very tight.’

‘We will pretty much get down to almost zero,’ he warned.

‘We have very carefully calibrated this. If the deliveries are late, that might create a bit of a headache.

‘We have made that decision deliberately … we didn’t want to have vaccines sitting in the freezer as a contingency. We’d rather get them out and into people.

‘It does mean we’re cutting it very fine.’

‘There’s no question that is going to be keeping me awake for the next seven days,’ he said.

New Zealand, which has been largely successful in keeping the virus out through a border regime, has scheduled mass vaccination for the last six months of the year.

The News Zealand government has delayed delivery as it builds capacity in its embattled health system for the mammoth undertaking and has signed deals with Pfizer to vaccinate every consenting Kiwi this year – a pledge it is holding firm to.

As of last week, it has administered 1.019 million doses of the Pfizer vaccine, with 13 per cent of Kiwis receiving at least one shot.

Only certain parts of the population, including border and health workers, and at-risk groups are currently eligible to be vaccinated.

Larger shipments are expected from Pfizer later in July.

‘The government needs to be putting heavy pressure on Pfizer to come to the party.’

Despite its dwindling supplies, New Zealand is still ahead of Australia when comparing the rate of fully vaccinated residents, according to alarming new data. 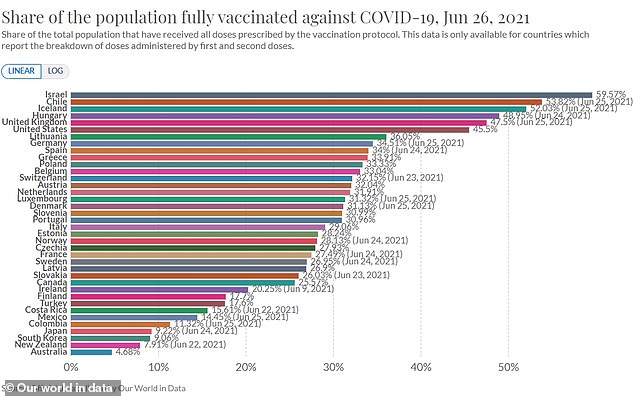 Just 5.79 per cent of Australians are now fully vaccinated four months after the country’s biggest ever inoculation rollout was launched, according to a graph compiled by Our World in Data.

New Zealand is faring only slightly better with almost eight per cent of Kiwis rolling up their sleeves twice for the jab.

Its rollout also began in February, around the same time as Australia.

Israel has vaccinated almost 60 per cent of its population followed by Chile with almost 55 per cent, while almost half of Britons and Americans have rolled up their sleeves.