A beloved family cat named Mittens who became a late-night socialite and local legend on the streets of Wellington is moving to a new city, to live a quieter life.

Born in 2010, the Norwegian forest cat originally lived a low-key lifestyle in Auckland until his move to Wellington where he garnered local legend status for his late night jaunts.

An established feature in the city’s nightlife, he once paid a visit to a strip club and earned his nickname from sitting on the counter of the Cuba St bar until 2am.

His concerned owners are now packing up and heading back to Auckland.

Mittens the cat, famous for wandering the streets of Wellington’s CBD is packing up his bags and moving to Auckland (pictured)

His late night exploits made him a familiar face in the CBD with locals eager to snap a selfie with the city’s most famous feline.

Also known as His Royal Floofiness, his celebrity status even earned him the Key to the City in a mayoral ceremony and a nomination for New Zealander of the Year.

But Mittens’ record hasn’t always been so squeaky clean after he was detained by police for strolling into traffic near the city’s library.

He was brought in by police for questioning, but after having his details checked he was released without charge and let off with a warning.

Another indiscretion involved Mittens attempting to enter a Covid-19 isolation facility in Wellington with security guards at the entrance forced to shoo him away.

In February Mittens made headlines after an attempted ‘cat napping’. 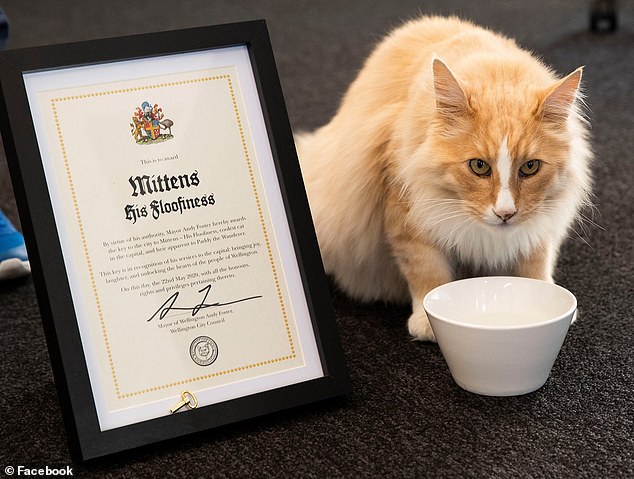 An excited group of individuals encountered the famous feline on the street who picked him up and drove away with him.

Mittens was taken in an ‘error of misjudgment’ and later returned home unharmed.

Owner Silvio Bruinsma said Mittens had ‘a social life most of us would aspire to’.

The shock move was confirmed to Mittens’ 70,000 followers on Facebook, posting the family will be moving to Auckland over the holiday period.

‘This is for personal reasons and is the right move for our family but I do appreciate this will come as a shock to some of you,’ Bruinsma wrote.

‘Mittens is now 64 in cat years (he is a 12 years old) and some of you may have noticed he has slowed down a bit which is certainly well earned. He is as inquisitive, caring and a great companion as always.’ 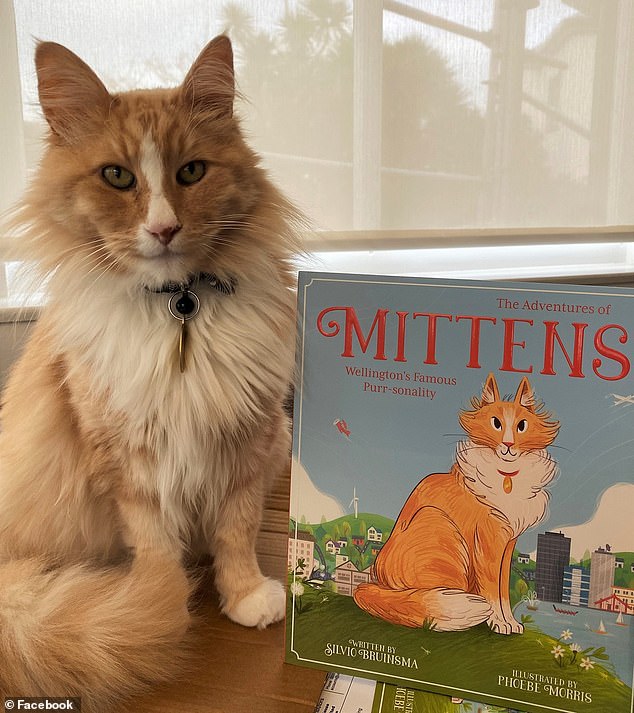 Owner Silvio Bruinsma, confirmed the devastating news via Mittens’ Facebook page saying the family were moving over the holiday period

Mayor Andy Foster confirmed Wellington council has been made aware of the move.

‘I think everybody is going to be really sad to see our favourite feline heading off for new adventures and he’s obviously brought a lot of people a lot of joy over the time he and his family have been in Wellington,’ Foster told The NZ Herald.

‘He does have the Key to the City so he’s welcome back at any time.’

Last year Mr Mittens was awarded city’s highest honour in a small ceremony where he was presented with the Key to the City.

Mr Foster confirmed Mittens would be able to keep the key as a memento of something that was ‘quite special’.