An Obama-era ambassador will plead guilty to illegally lobbying for Qatar and taking $20,000 a month from a criminal fixer who funneled illegal campaign contributions to Joe Biden, Donald Trump and Lindsey Graham.

Richard G. Olson, 62, is a former career diplomat who served as ambassador to Pakistan and the UAE. He ended his 34-year tenure at the State Department as a special representative for Afghanistan and Pakistan in 2016.

He’s now been charged with running a secret lobbying campaign for the Qatari government. He allegedly tried to drum up business while he was still in his State Department role. He plans to plead guilty.

The lobbyist also allegedly funded a $19,000 trip to the UK in 2015 for Olson to discuss a $300,000 deal with a Middle East businessman while he was still ambassador.

DailyMail.com can reveal the lobbyist is Imaad Zuberi, an LA-based jet-setting playboy currently serving 12 years prison after funneling foreign cash to the campaigns of Joe Biden, Donald Trump, Lindsey Graham and a host of other U.S. politicians.

Richard G. Olson, 62, will plead guilty to pushing for US policy favoring Qatar shortly after leaving the State Department in 2016, in violation of a ‘revolving door’ lobbying policy 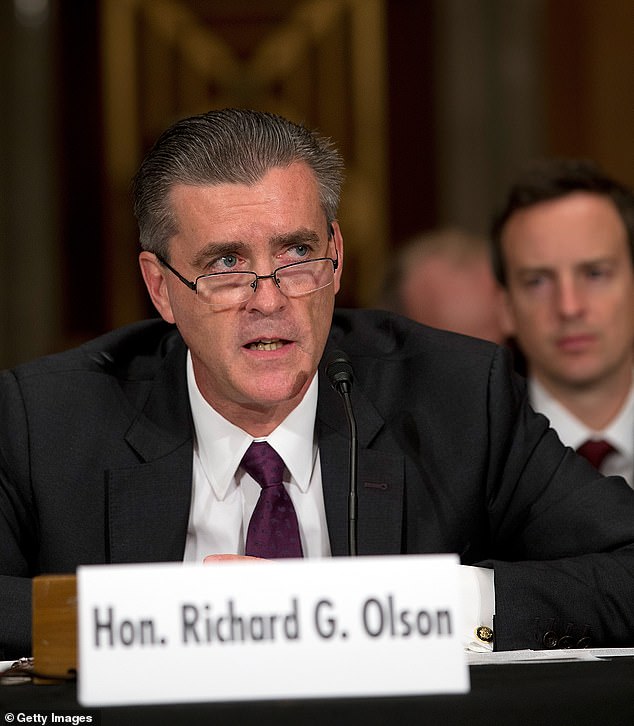 In 2012, President Obama nominated Olson for ambassador of Pakistan. He ended his 34-year tenure at the State Department as a special rep for Afghanistan and Pakistan in 2016 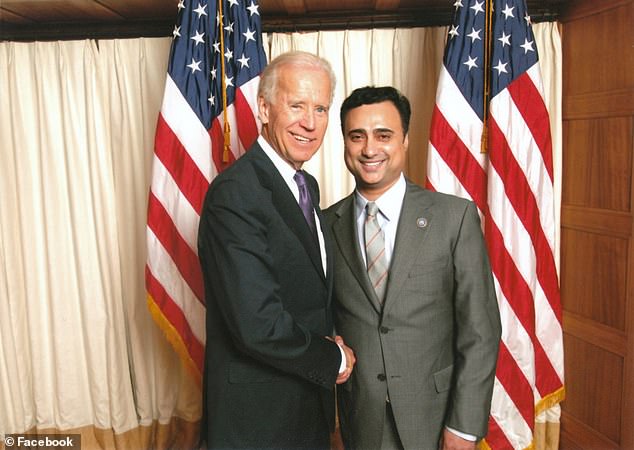 Olson is accused of taking a job under foreign lobbyist Imaad Zuberi (right) ‘just prior to, or shortly after’ he retired in 2016. Zuberi is serving 12 years in prison for helping to funnel foreign cash to the campaigns of Joe Biden and other US politicians 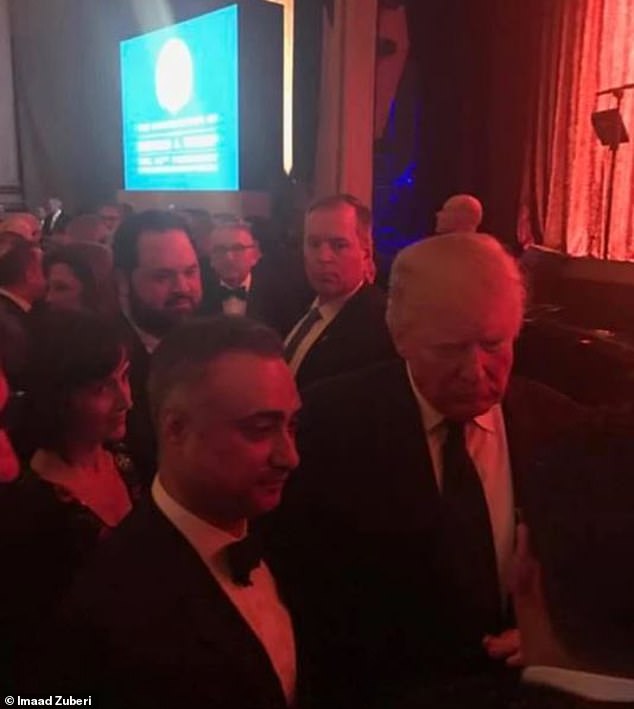 Federal prosecutors described Zuberi, who reports to prison May 25, as a ‘mercenary’ political donor who gave to anyone he thought could help him. Zuberi pictured with Donald Trump

According to a criminal information filed this month in federal court and first reported by Axios on Wednesday, Olson lobbied US officials and ‘several sitting members of the U.S. House of Representatives’ on behalf of Qatar.

Zuberi named only as ‘Person 1’ in the criminal filings against Olson – but has been identified by DailyMail.com as the alleged fixer in the secret lobbying scheme.

The prosecutors’ filing says he met with Olson in Islamabad, Pakistan in 2013 and ‘solicited [Olson’s] advice and assistance in his capacity as Ambassador with respect to a variety of business matters’ until 2016.

In January 2015, while Olson was still a government official, he allegedly met with Zuberi in Los Angeles and discussed potentially working for a Bahraini businessman.

Later that month Zuberi flew Olson first class to London at a cost of $18,829 to meet with the businessman, who proposed a $300,000 per year job after he left government, prosecutors said.

The criminal information says ‘just prior to, or shortly after’ Olson retired from government,’ Zuberi agreed to hire him ‘for $20,000 per month plus expenses,’ sending him his first check on December 15, 2016 to Olson’s company, Medicine Bear International Consulting, LLC.

Olson graduated from Brown University in 1981 with a degree in law and society and history. He joined the State Department a year later and went on to serve in Mexico, Uganda, Tunisia, Saudi Arabia, Ethiopia and the United Arab Emirates, according to a department biography. 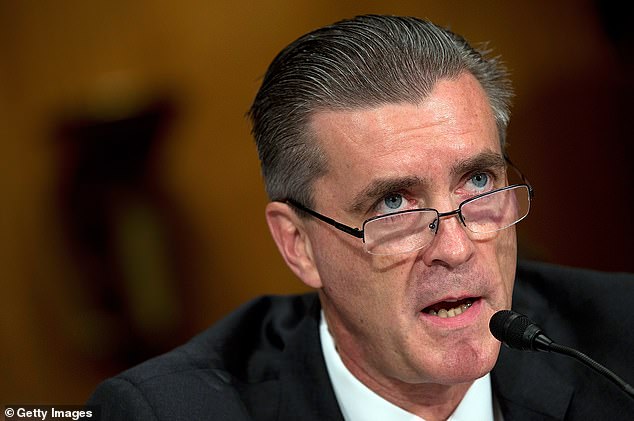 Prosecutors say Olson, 62, met with Zuberi multiple times in foreign countries in an alleged attempt to line up work for when he left government 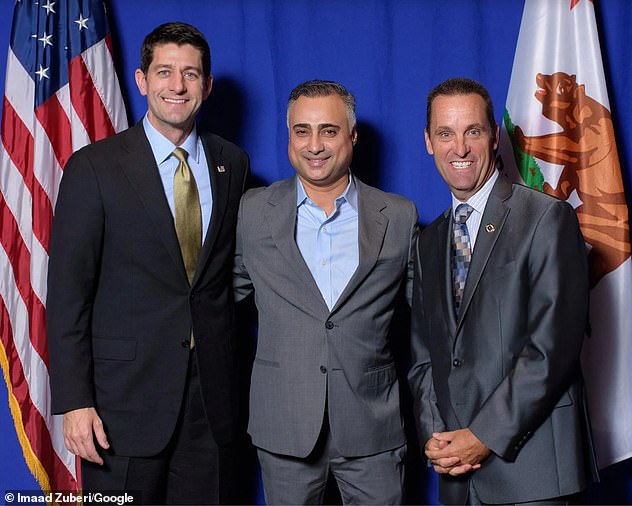 Imaad Zuberi (center), a venture capitalist and a major political donor, is pictured with Paul Ryan (left). He was sentenced to 12 years prison after funneling foreign cash to the campaigns of Joe Biden, Donald Trump, Lindsey Graham and other US politicians

Former President Barack Obama nominated Olson to serve as ambassador to Pakistan in 2012, after the previous ambassador quit amid the fallout from the US’s covert killing of Osama bin Laden in the country that May.

The Senate confirmed Olson in September. By the time he left the department in 2016, he was the special representative for Afghanistan and Pakistan.

As part of his alleged secret lobbying campaign, the ex-ambassador was trying to get the US government and lawmakers to take Qatar’s side in a 2017 dispute with its regional Persian Gulf rivals.

Prosecutors say Olson also lobbied to get US Customs and Border Protection preclearance set up at Doha Airport.

Senior former officials are not allowed to lobby for foreign governments for a year after they leave office, and are required to disclose gifts such as the alleged $19,000 2015 trip to the UK.

The Department of Justice says Olson broke both rules, and he has indicated he will plead guilty.

The site reported that emails it obtained showed that Zuberi coordinated, paid for and joined in the trip.

Mother Jones reported that Olson was an adviser to Zuberi’s company, Avenue Ventures, at the time, and had an Avenue Ventures email address that was copied on the correspondence they obtained. 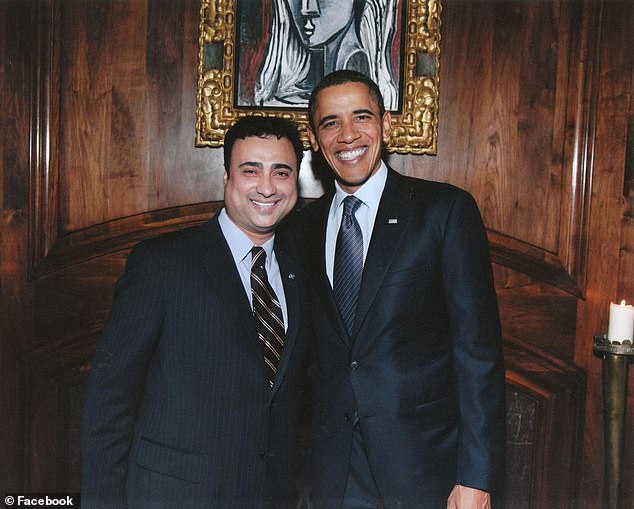 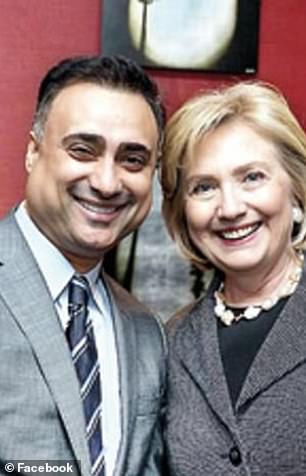 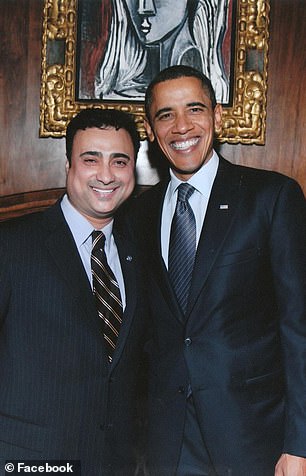 Zuberi, 50, maintained that his wrongdoing had been limited and asked to be credited for years of cooperation with federal and local law enforcement. The political donor pictured with Hillary Clinton and also with then-President Barack Obama 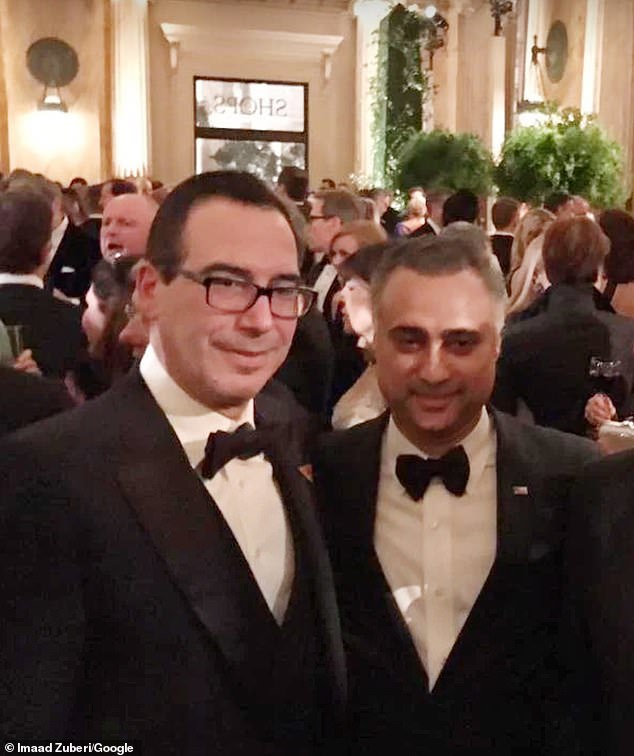 Zuberi, a Pakistani-American who has extensive business dealings overseas, was in frequent contact with a CIA officer over the years and bragged to associates of his ties to the intelligence community. Zuberi pictured with Steven Mnuchin

Zuberi was cooperating with the feds during his prosecution for funneling foreign cash illegally to top political campaigns.

He pleaded guilty last year to charges of tax evasion, campaign finance violations and failing to register as a foreign agent.

Zuberi’s clients included the governments of Libya, Sri Lanka, Bahrain and Turkey, and a Ukrainian oligarch close to Vladimir Putin.

Qatar, a small gas-rich monarchy, has paid him $9.8 million, prosecutors have alleged in court papers.

He stayed at fine hotels, hosting lawmakers and diplomats at four-star restaurants.

Foreign ambassadors turned to the charming networker and inveterate namedropper to get face time in Congress.

Prosecutors said the political fixer told his clients that pay to play was just ‘how America work(s).’

His Facebook account was filled with pictures of him next to the powerful and famous: having dinner with Hillary Clinton and Robert De Niro and rubbing shoulders with Trump’s then-chief of staff Reince Priebus outside Mar-A-Lago. 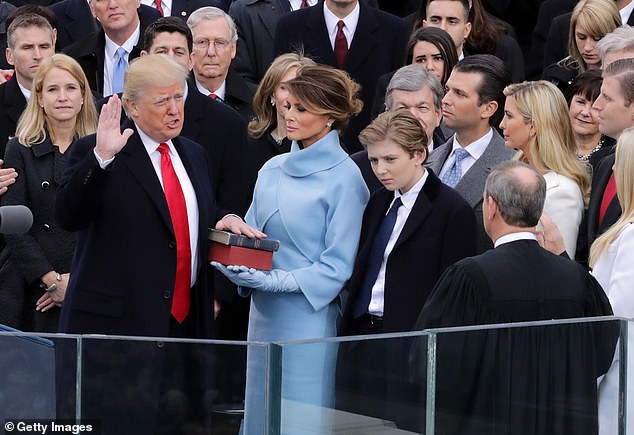 Zuberi gave six-figure donations to the Obama-Biden ticket in 2012 and Clinton’s presidential campaign in 2016. But when she lost, he quickly switched saddles, donating $900,000 to Trump’s inaugural committee

‘Everyone wants to come to Washington to meet people,’ Zuberi said in a 2015 email obtained by The Associated Press, seeking a meet-and-greet between the president of Guinea and a powerful congressman.

‘We get request(s) for meeting(s) from all scumbag of the world, warlords, kings, queens, presidents for life, military dictators, clan chiefs, tribal chiefs and etc.’

He gave six-figure donations to the Obama-Biden ticket in 2012 and Clinton’s presidential campaign in 2016.

But when she lost he quickly switched saddles, donating $900,000 to Trump’s inaugural committee.

Zuberi claimed he was a longtime source for the CIA, and presented evidence of his work for the spy agency in a closed hearing in his criminal case.

He was sentenced to 12 years in prison in February 2021. He was also was ordered to pay nearly $16 million in restitution and a nearly $2 million fine.