Former President Barack Obama was surprised to receive a phone call this past April from his former rival John McCain, who had a request: give one of the eulogies at his funeral.

Obama vanquished McCain in the 2008 presidential election, a contest filled with bitter moments – including conspiracy theorists touting debunked talk that Obama was born in Africa and McCain’s anger at the attention the younger Obama was getting.

And, while the two had a cordial working relationship, they were never personally close. 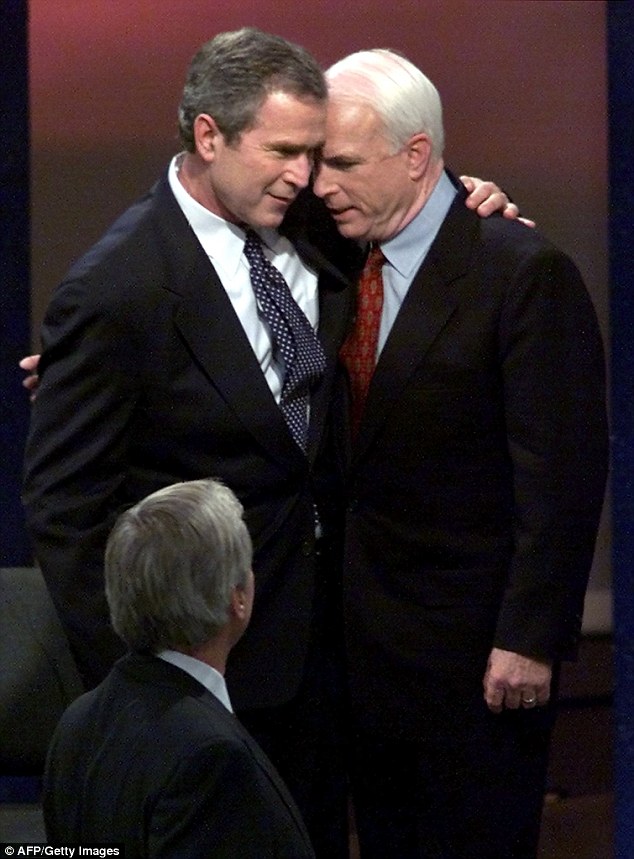 So Obama was taken aback by the invitation, his aides toldCNN, although he immediately said yes to McCain’s wishes.

Former George W. Bush, who received a similar call from McCain in the spring, was also surprised, the network reported.

Both men will speak on Saturday at McCain’s funeral at the Washington National Cathedral.

Bush and McCain are both Republicans but Bush defeated McCain for the 2000 GOP presidential nomination, which included a bitter allegation before the crucial South Carolina primary that McCain fathered a black child – a reference to the daughter and Cindy McCain adopted from Bangladesh.

McCain’s requests, however, had a greater purpose: a not-very-subtle jab at a person McCain didn’t want there: the current White House occupant, President Donald Trump.

The late senator, before he died, made it known Trump was banned from his funeral.

What McCain and Obama have in common is a mutual respect for one another plus a growing sense of alarm at the volatile political climate brought about by Trump.

But their call was arranged by aides and was not simply McCain dialing him directly, which is what he does with his friends, CNN reported.

The two had only spoken a few times since Obama left office and one of those occasions was when Obama called the senator to thank him for his thumbs down, no vote on a GOP healthcare plan alternative that would have killed Obamacare.

Obama had not visited McCain at his Sedona, Arizona, ranch in his final days as so may others had – including George and Laura Bush.

McCain and Trump clashed repeatedly during the 2016 presidential election, when McCain emerged as a harsh critic of his party’s nominee.

They were never able to bridge the gap between them. 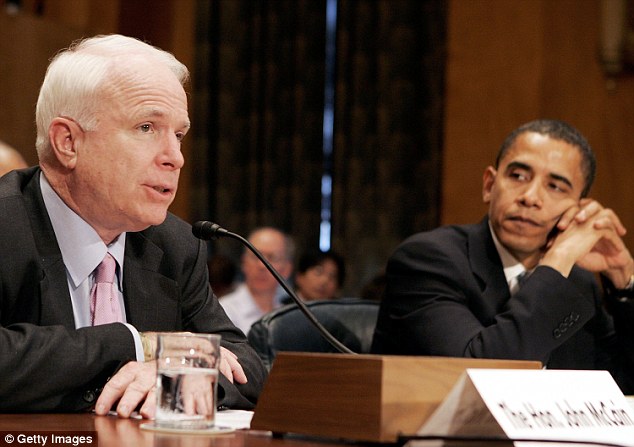 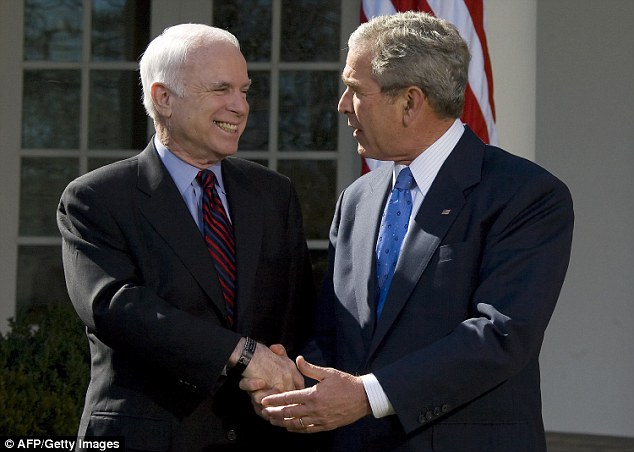 Republican presidential candidate John McCain shakes hands with President George W. Bush after receiving his endorsement in the Rose Garden of the White House on March 05, 2008

The longtime feud between the two men reached its peak on Monday, after the White House raised its flag to full staff, prompting outrage at what people took to be a slight of the late senator.

The president relented Monday afternoon – after the commander of the influential veterans group the American Legion released a statement asking for the flag to be lowered.

‘Despite our differences on policy and politics, I respect Senator John McCain’s service to our country and, in his honor, have signed a proclamation to fly the flag of the United States at half-staff until the day of his interment,’ Trump said in a statement.

Obama and Bush had issued statements in the immediate aftermath of McCain’s death.

But McCain got in the last word when he issued a sharp rebuke to Trump in his final letter to America, read by his longtime aide Rick Davis after his death.

‘We weaken our greatness when we confuse our patriotism with tribal rivalries that have sown resentment and hatred and violence in all the corners of the globe,’ McCain’s statement read. ‘We weaken it when we hide behind walls, rather than tear them down, when we doubt the power of our ideals, rather than trust them to be the great force for change they have always been.’

McCain also ended his letter on a hopeful note: ‘Do not despair of our present difficulties but believe always in the promise and greatness of America, because nothing is inevitable here. Americans never quit. We never surrender. We never hide from history. We make history.’ 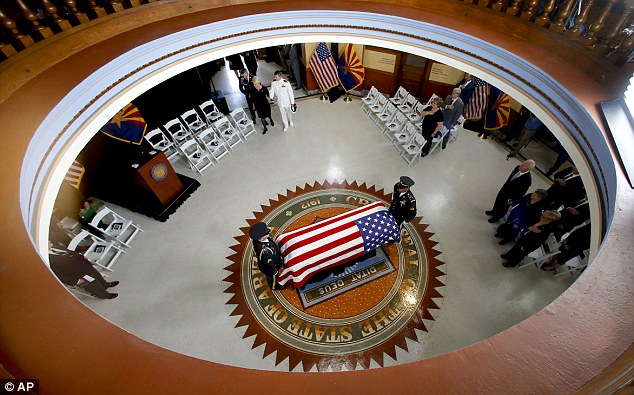 Obama and Bush will both speak at McCain’s funeral on Saturday at the Washington National Cathedral; McCain’s remains are lying in state at the Arizona state Capitol rotunda 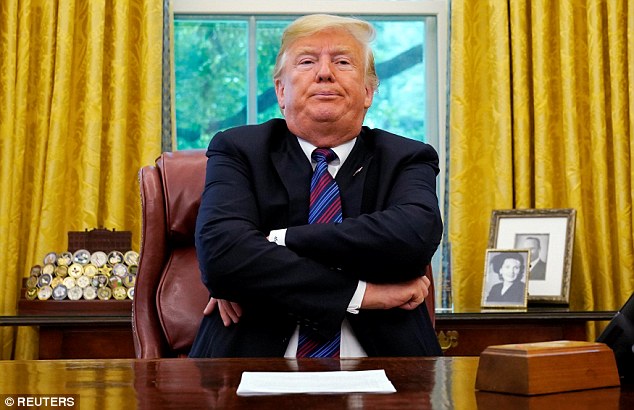 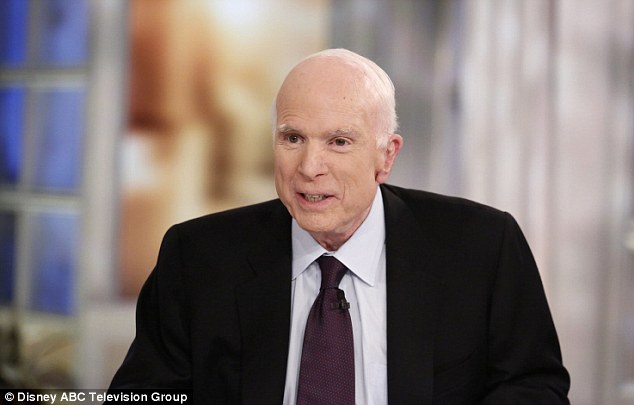 Trump and McCain’s bad blood stems back to June 2015 when Trump announced he was running for president and called Mexican immigrants ‘rapists’ and drug runners during a speech.

McCain distanced himself from the future-president saying in an interview that he disagreed with Trump’s comment. Trump fired back by calling McCain ‘incompetent’ during a July 2015 rally at the Phoenix Convention Center.

When Trump visited Iowa in July 2015, as part of the Republican presidential primary campaign, he told the Family Leadership Summit that McCain was not a war hero because he ‘was captured.’

‘He’s not a war hero,’ said Trump. ‘He was a war hero because he was captured. I like people who weren’t captured.’

McCain, a former Navy pilot, spent roughly five-and-half years of the Vietnam War in a notorious North Vietnamese prison known as the ‘Hanoi Hilton,’ where he was repeatedly tortured. He spent two of those years in solitary confinement.

The two men also feuded during the campaign, when McCain criticized Trump’s comments on a Gold Star Family that spoke during the Democratic National Convention

Khizr Muazzam Khan, a Pakistani American, spoke about the death of his son in Iraq. He was accompanied by his wife Ghazala, who stood next to him while he spoke.

Khan was critical of Trump, who later defended his work for veterans and then remarked on Ghazala’s presence on stage, implying a connection between her silence and gender roles in Islam: ‘If you look at his wife, she was standing there. She had nothing to say. She probably – maybe she wasn’t allowed to have anything to say. You tell me.’ 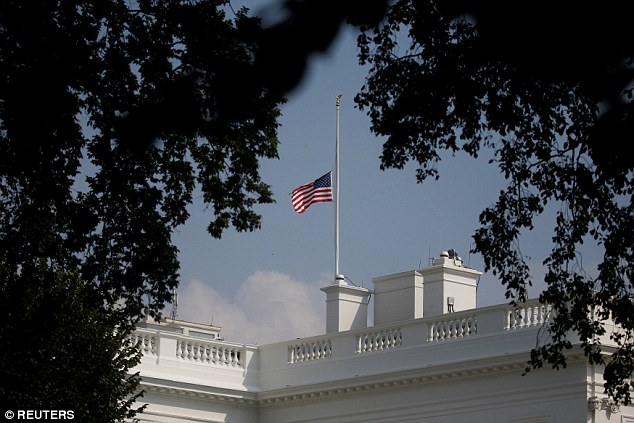 Down on president’s orders: The flag above the residence in the White House was lowered Monday after criticism that John McCain was not being honored 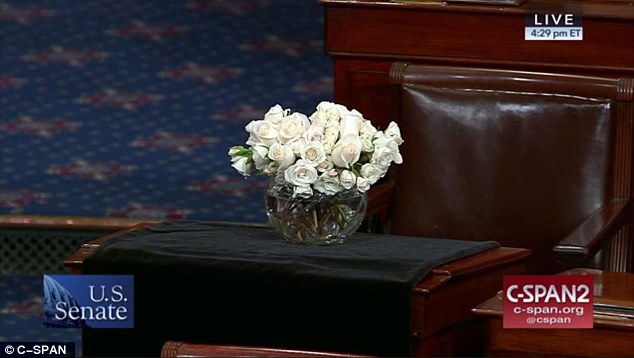 Officials from both parties criticized his remarks but the harshest came from McCain who issued a statement calling the incident his ‘most severe disagreement’ with Trump, saying ‘While our party has bestowed upon him the nomination, it is not accompanied by unfettered license to defame those who are the best among us.’

The two men sniped back-and-forth at each during Trump’s time in the White House with McCain emerging as one of the president’s sharpest critics.

In July, McCain lashed out at the president after Trump said during a meeting in Helsinki with Russian president Vladimir Putin that he accepted Russia’s claim that that they did not meddle in the U.S. presidential election.

McCain said of Trump’s comments: ‘No prior president has ever abased himself more abjectly before a tyrant’.

This past year, when the president has spoken of the senator, it’s often in reference to his thumb’s down gesture that accompanied his dramatic return to the Senate on July 27, 2017 after being diagnosed with brain cancer, to vote on a hastily assembled GOP bill to repeal and replace Obamacare.

He walked on to the Senate floor to a standing ovation from lawmakers and gave a dramatic thumbs down to signal his ‘no’ vote on the legislation, killing Republican plans to remove the Affordable Care Act.

Additionally, earlier this month, Trump failed to recognize McCain during a signing of the John S McCain National Defense Authorization Act, which lawmakers implemented to honor McCain’s leadership of the Senate Armed Services Committee and his years of service in the Senate.