An overweight couple have lost 13 stone between them and now they admit that the weight loss has spiced up their sex life.

In March 2012, Rebecca Edwards, 29, from Hampshire, met her now husband, Aaron, 31, through a dating app and five months later she became pregnant with their first child, Lily, 5.

They had both been overweight for the majority of their adult lives and when they met Rebecca was at her peak weight of 14st 8Ib and size 18, while Aaron was 23st and was a XXL shirt size.

They both indulged in junk food and takeaways, and collectively, they would both consume around 7,000 calories a day from Chinese takeaways and ready-made meals – which caused them to feel lethargic, especially in the bedroom.

But after changing the way they think, cutting out the junk food and signing up the gym Rebecca is now a healthy 10st and UK size eight to 10, while Aaron is now only 14st and size medium.

An overweight couple, Rebecca Edwards (right) and  Aaron (left) have lost 13 stone between them and now they admit that the weight loss has spiced up their sex life. Pictured – on their wedding day before the weight loss 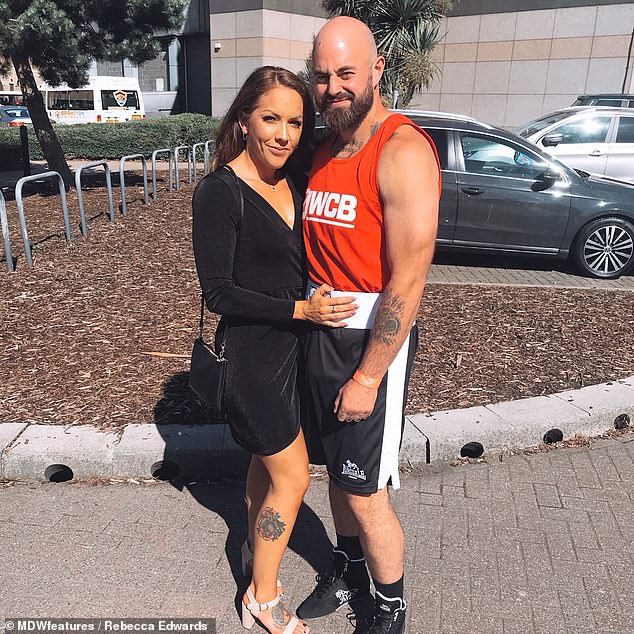 Rebecca began cooking all their meals, which meant that they weren’t eating junk food and they both started to exercise – losing 13 stone between them

When they were over weight they both hated themselves and had no confidence. Rebecca couldn’t bear to shop for clothes and Aaron felt like he couldn’t wear what he wanted. They struggled to keep up with their daughter and felt like they were failing her.

In 2016, they welcomed their second child, Isla, now three, and were over the moon. While later that year they also got married. But their excess weights prevented them from doing daily activities and left them both feeling depressed.

It wasn’t until two years later when Rebecca saw another mother pushing her baby in a pram up a large hill that she decided she would work on losing weight.

She began cooking all their meals, which meant that they weren’t eating junk food and eating out less. While before Aaron would eat two portions of rice in one sitting, they are now sharing one portion of food between them which helped in their weight loss massively. 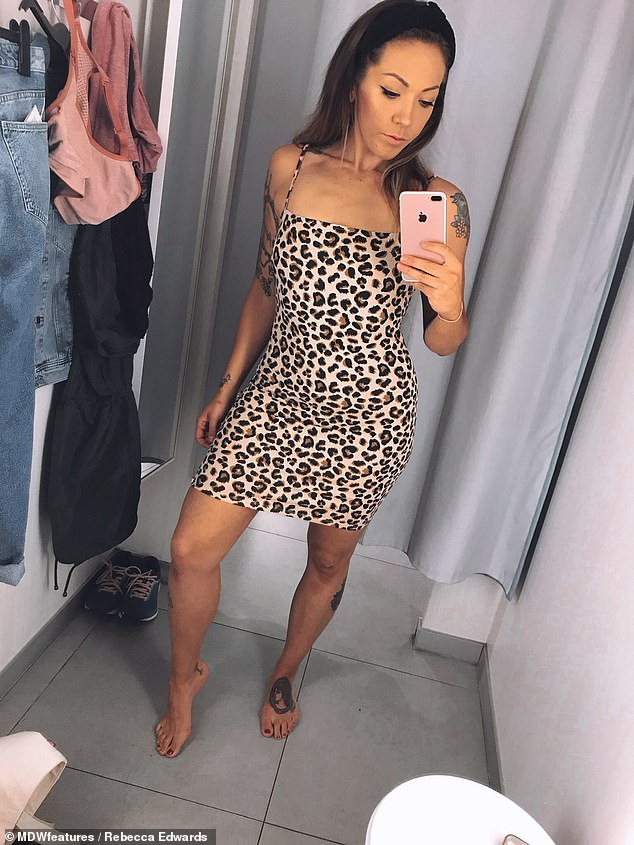 ut after changing the way they think, cutting out the junk food and signing up the gym Rebecca is now a healthy 10st and UK size eight to 10 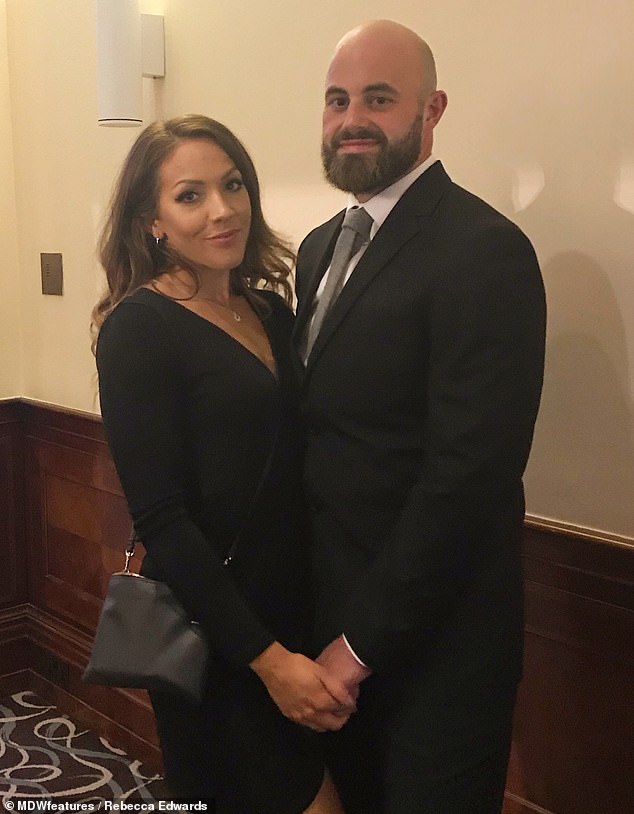 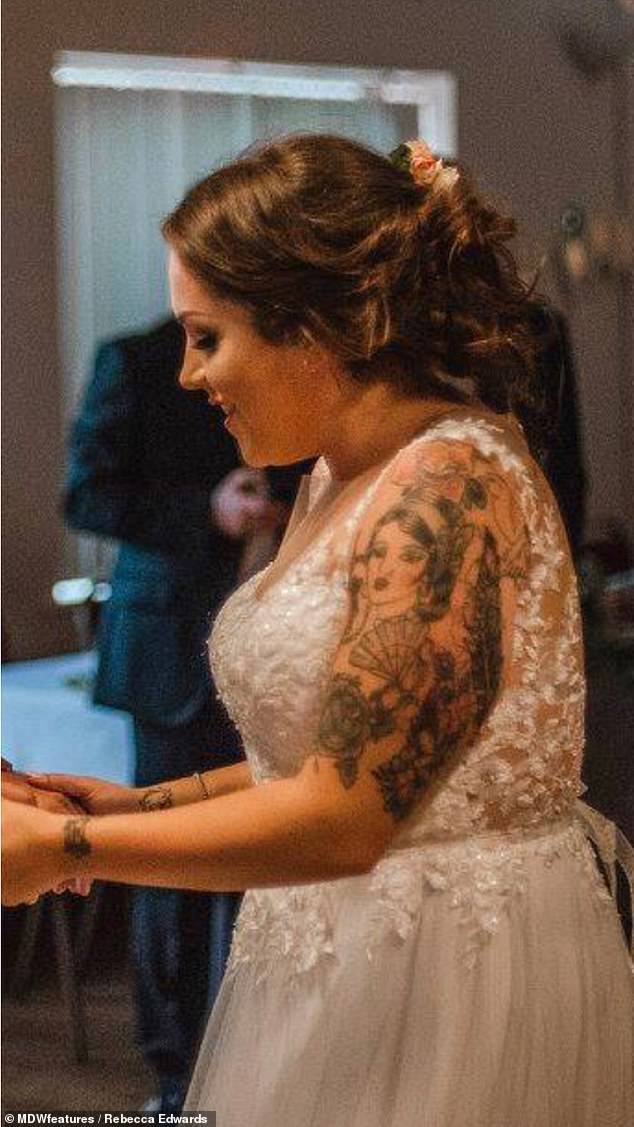 Rebecca pictured at her wedding before her weight loss. She says that her transformation was all about speaking to herself differently – telling herself she could do it

Their new lifestyle has resulted in Rebecca shrinking to a healthy 10st and UK size eight to 10, while Aaron is now only 14st and size medium.

They say that their relationship has improved a lot since their weight loss –  they feel more confident in the bedroom and they feel like better parents to their daughters. 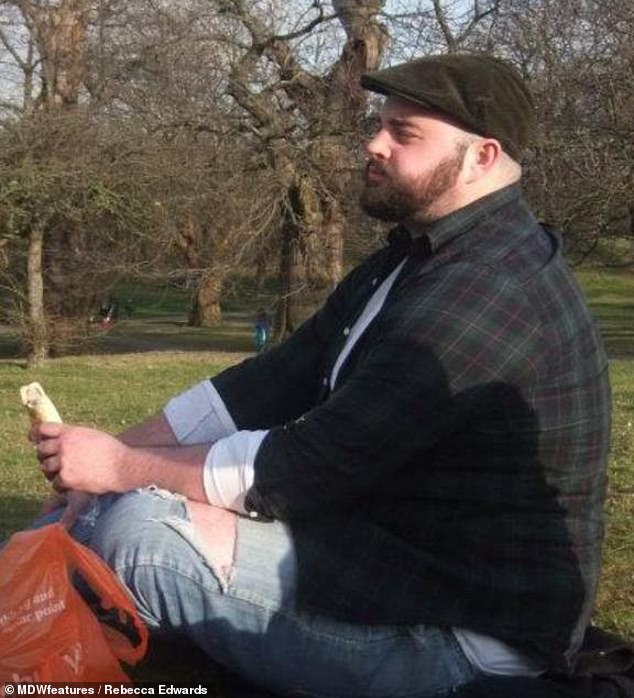 They both indulged in junk food and takeaways. And collectively, they would both consume around 7,000 calories a day from Chinese takeaways and ready-made meals, which caused them to feel lethargic and they lacked romance 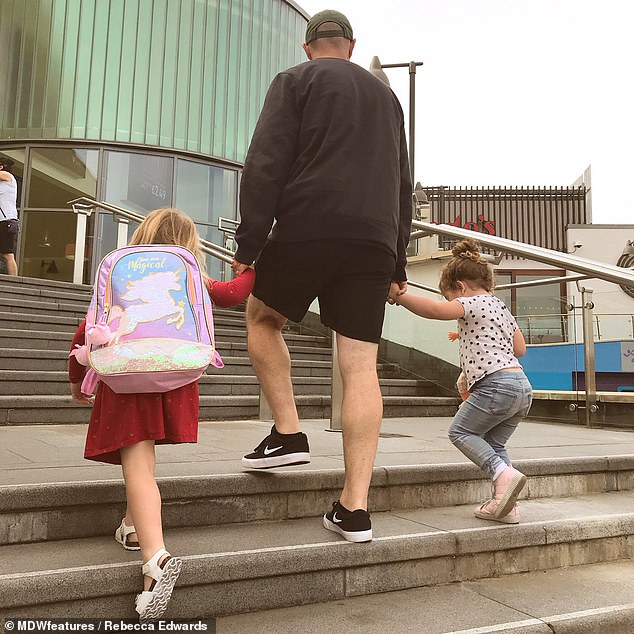 ‘We have both been overweight for our entire adult lives, Aaron found that when he started to make his own money after leaving school, he was able to start choosing his food and he was living off of takeaways,’ Rebecca said.

‘I went to university after college and I never even gave my diet a second thought, I was living off of absolute rubbish, drinking excessively and not doing any exercise at all.

‘I would hate how I looked and felt, and I would turn to food to comfort me. Aaron did the same. When you are so far into a hole with depression, and truly hating yourself, you don’t see a way out and it feels like the only option is to continue. 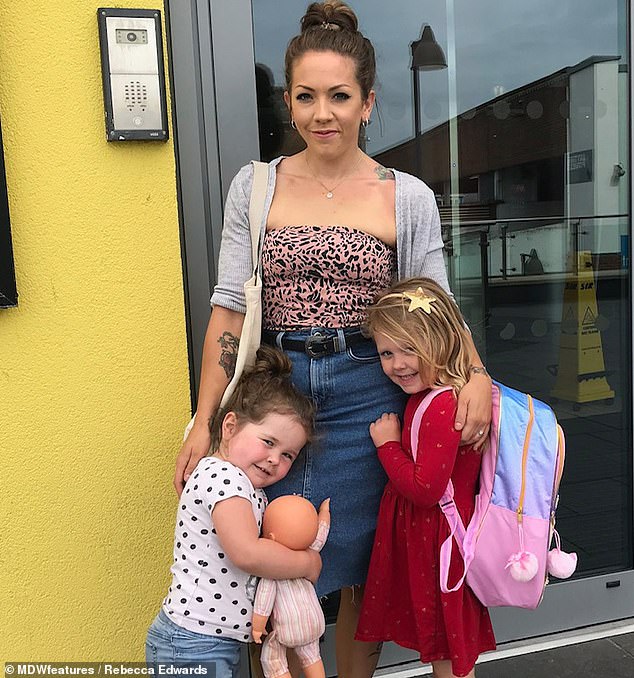 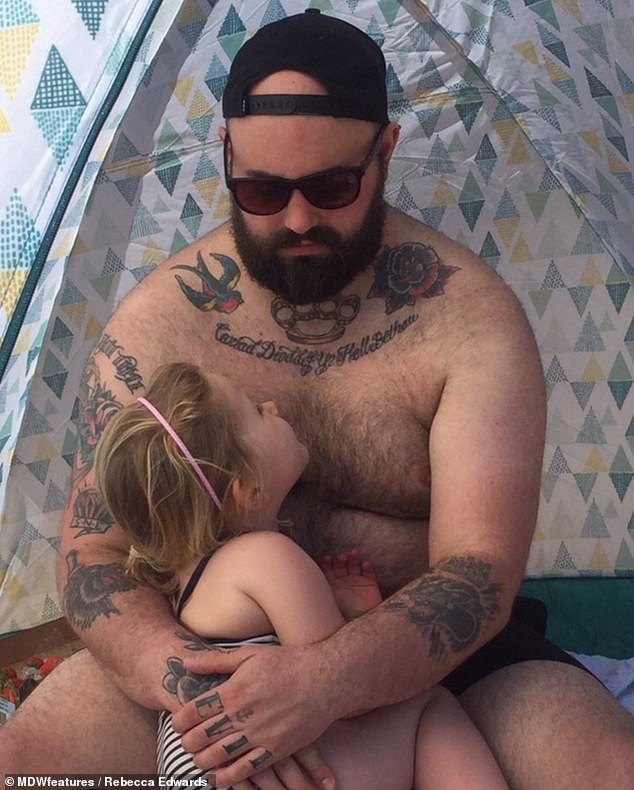 Aaron pictured with his daughter, Lily, post-weight loss. He is now 14st and a size medium, instead of an XXL size 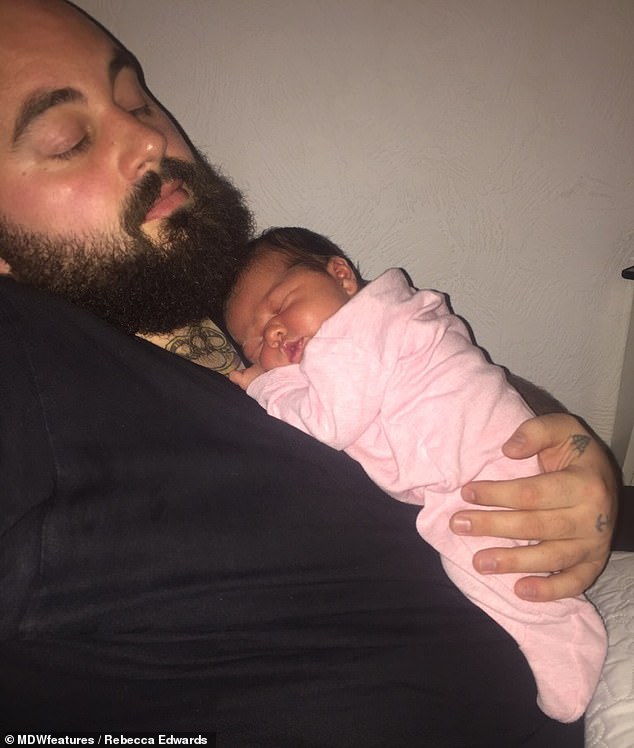 Aaron pictured with a newly born Isla before he had lost the weight. Both him and Rebecca say they hated themselves and had no confidence

‘We both absolutely hated ourselves, I felt I had no self-worth. I couldn’t stand going clothes shopping, trying things on in shops was not an option for me at all. I would just pick something baggy and hope for the best.

‘Aaron would often have an outfit or a style in his head of how he would love to look, but when he tried to execute the idea it wasn’t how he wanted to look at all, so he gave up trying and would dress for comfort.

‘I remember on nights out, I would get so upset getting ready that I would physically rip my clothes off and cry, it was awful. 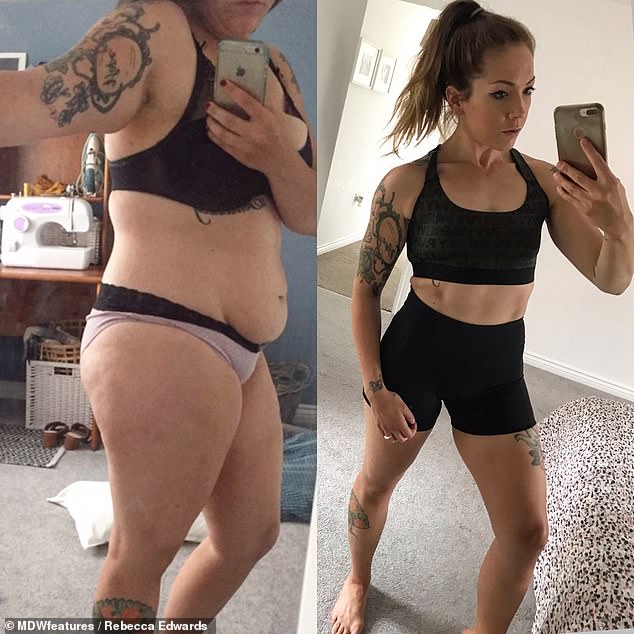 Rebecca pictured before (left) and after her weight loss. She is now goes to the gym six times a week 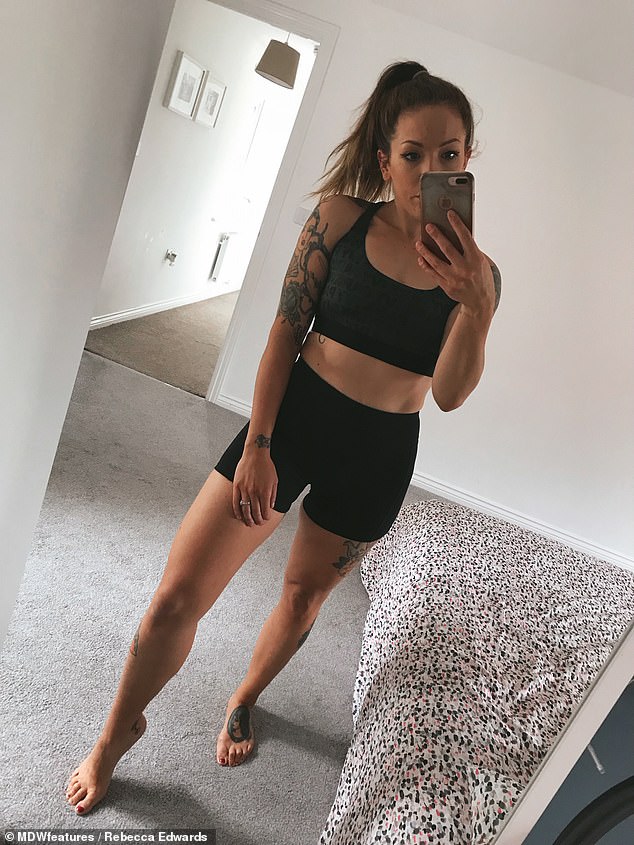 ‘In the end I would ‘pre drink’ so excessively that by the time we were leaving the house, I would throw anything on, so I wasn’t even aware of how I looked. I truly had no self-confidence at all and hated myself.

‘We felt we were really failing our daughters before, because of my diet and lifestyle some days I wouldn’t even want to take them outside to the park because my energy was so low. It makes me so sad to look back to those times.

‘I remember driving up to my mum’s house around this time a year ago. It was a really hot day and I was in my usual ‘throw it on and cover it all up’ huge baggy t-shirt and leggings and I saw another mum pushing her baby in a pram up a huge hill. 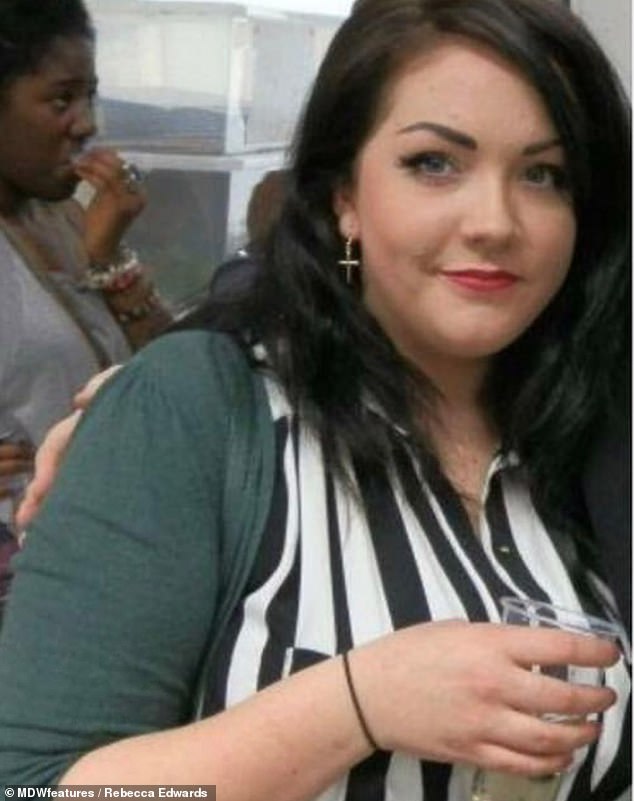 ‘She was wearing a white t-shirt and little denim shorts and I just thought to myself ‘wow. I want to be able to do that so badly’.

‘That very moment I changed the way I spoke to myself in my head – I told myself I could do it. I will have that ‘transformation’ and I am one of those people who actually did it and lost the weight.’

Rebecca says that when she made the decision to change her diet and live healthy, Aaron automatically lost the weight along with her as she was cooking their meals. 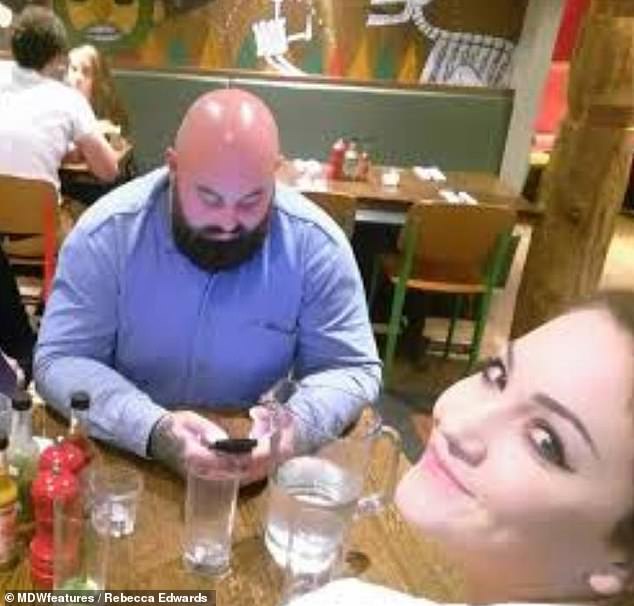 Before they didn’t include exercise in their routine and gorged on McDonalds breakfast meals, Greggs pastry and cake for lunch along with a Subway sandwich and a takeaway after 9pm for dinner.

Whereas, now they have a protein shake or porridge and fruit for breakfast, chicken salad with fat free yoghurt or a piece of fruit for lunch and a homemade Slimming World style meal like a curry, served with 100g of rice and a side of vegetables for dinner.

‘I joined a local Slimming world group the very next day and I never looked back. The fitness aspect to our weight loss journey was completely unexpected,’ she said. 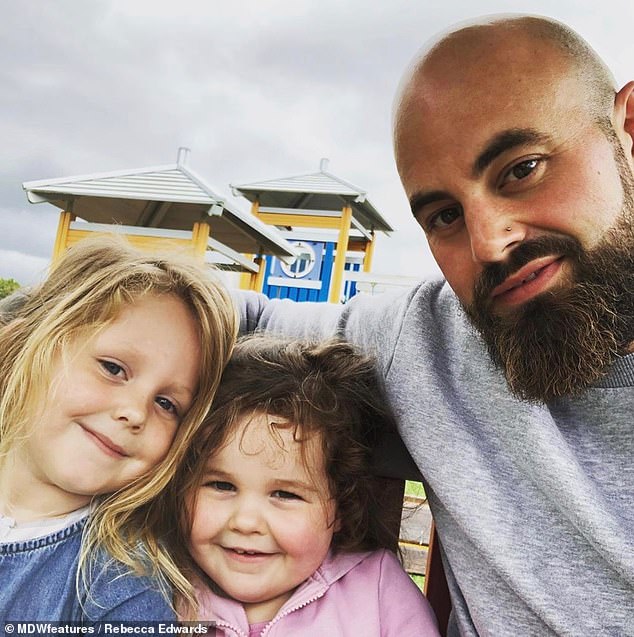 Aaron (right) pictured now, after the weight loss with his daughters, Lily (left) and Isla (middle)

‘As I lost my first few pounds, I started to feel so much better in myself and I was on social media one evening when I saw advertised a Bootcamp near my house.

‘I signed up online and I started that evening! I have no idea what drove me to do it, but I think I had a confidence boost from starting Slimming World alone, I thought, if I did that, I can do this.

‘I became instantly hooked and I was going to three sessions a week.. I started running too on the days I didn’t go to bootcamp and I was just completely hooked to the endorphins from exercising. 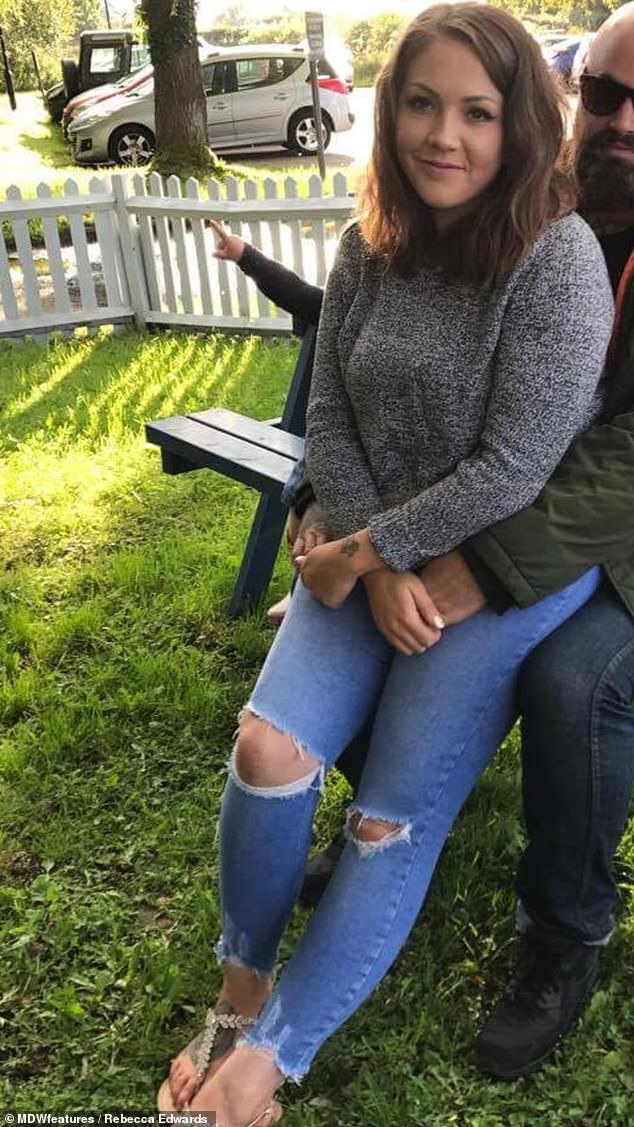 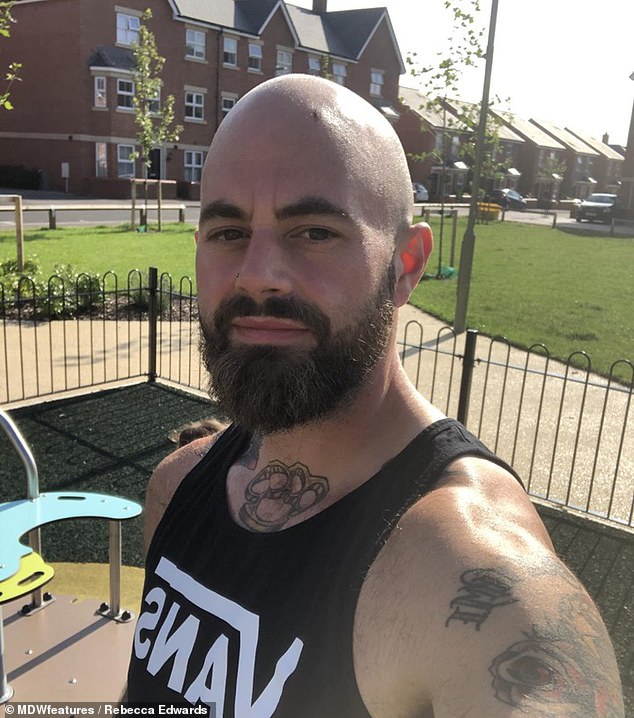 ‘I cook the majority of our meals, so Aaron was eating my healthy home cooked food and he started to really enjoy it.

‘In doing so, he started to see his weight drop too and we both just became completely driven by how good we were feeling. Aaron says that for the first time he believes that he could do it.

‘We were no longer binging on takeaways but enjoying evenings at home together or taking it in turns to go out and exercise. He soon joined the gym after a few weeks of weight loss. 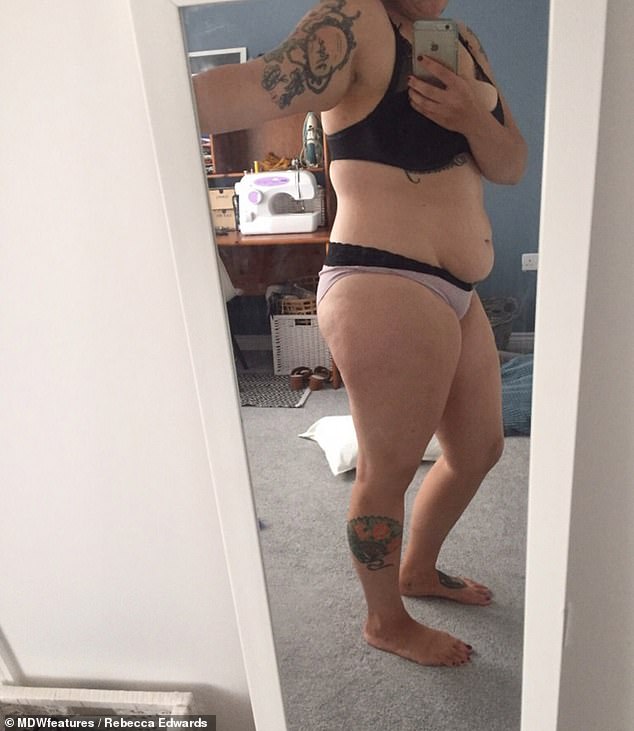 Rebecca pictured showing her body before her weight loss. She is now a healthy size 10 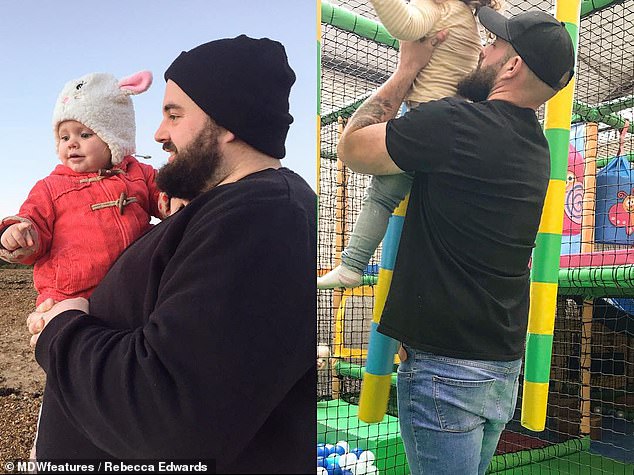 Before and after: Aaron pictured with his daughter before (left) and after (right) his weight loss

‘One of his dreams was to box. He entered a white-collar fight with eight weeks intense training, and it pushed him massively. His fight was a draw, and it was the best fight of the night.

‘We have cut down on portion size massively. Aaron used to have two portions of rice in one sitting, we now share one portion between us and fill up the rest of our plate space with veg or salad.

‘We both have a lot more confidence now in the bedroom – neither of us had a lot of energy before, we would be going to bed with a stomach full of Chinese – doesn’t exactly spell romance. 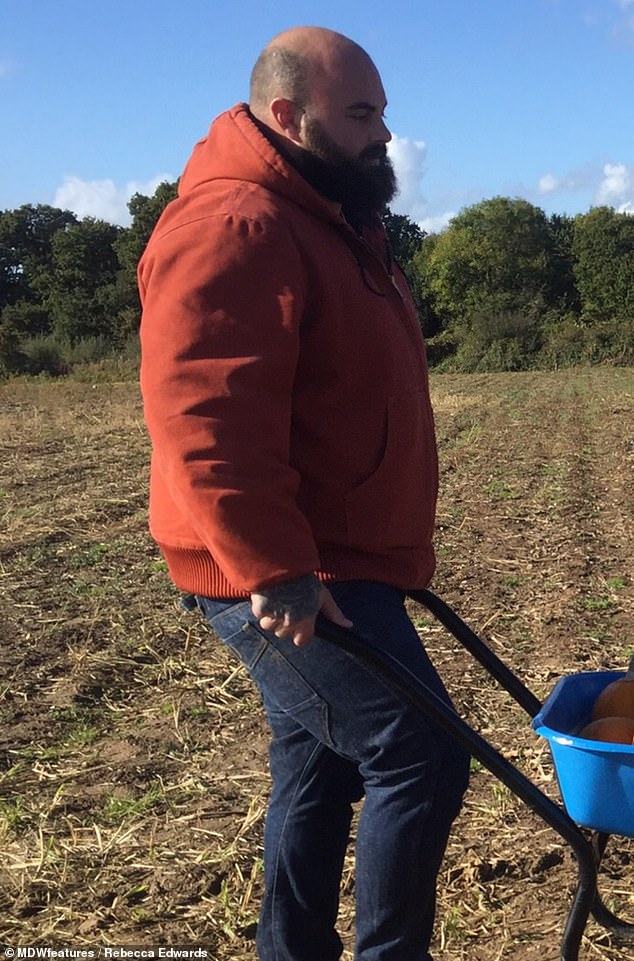 ‘It’s lovely to feel so close now, knowing what we’ve both been through and being able to express to each other how attractive we feel/find one another is really amazing actually.

‘The only way to achieve anything is to start. You will only start the cycle of being motivated if you actually do something. Go a whole day ‘on plan’ if you’re following slimming world.

‘Go for a walk or a swim, or a run if you’re able. Just do something in the right direction to get the ball rolling. Even if you aren’t sure where you are going, just go. Because you won’t get any closer staying stationary.

‘Just take it one day at a time and don’t overwhelm yourself with week-long meal plans and crazy diets.’

Dinner:  Subway sandwich or a takeaway

Lunch: Chicken salad with fat free yoghurt and a piece of fruit

Dinner: Homemade Slimming World  curry, with rice and a side of vegetables