Obese Dibsy finds love after losing 20 stone in a year

A man who lost a staggering 20 stone in just 12 months is enjoying a new lease of life – after getting an ‘amazing’ girlfriend.

Darren ‘Dibsy’ McClintock, from Middlesbrough, hit the headlines last month when it emerged he’d lost half his entire body mass since embarking on an epic weight loss journey last year.

His no nonsense personal trainer, Mike Hind, banned Dibsy from local takeaways in a bid to turn his life around after doctors warned he was ‘eating himself to death.’

Dibsy has now revealed he’s in a relationship with a trainee nurse called Jade, 28, who’s also from Middlesbrough, got in touch with him after following his progress online.

In just a year, Dibsy dropped 20 stone, half his body weight, going from 40 to 20 stone and counting.

Darren ‘Dibsy’ McClintok, from Middlesborough, has found love after a year-long weight loss journey where he lost 20 stone, going from 40 to 20 stone. Pictured after the weight loss with girlfriend Jade, 28 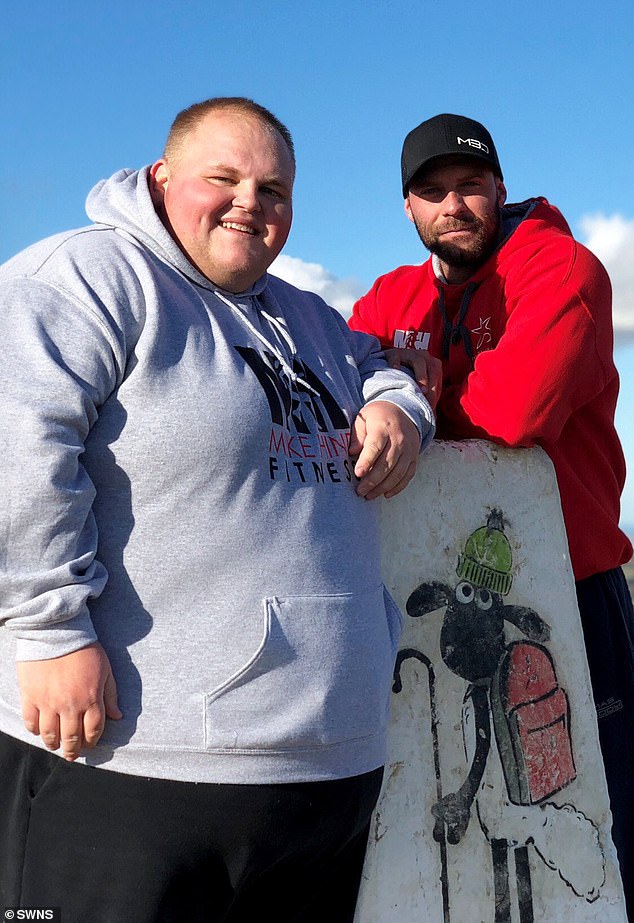 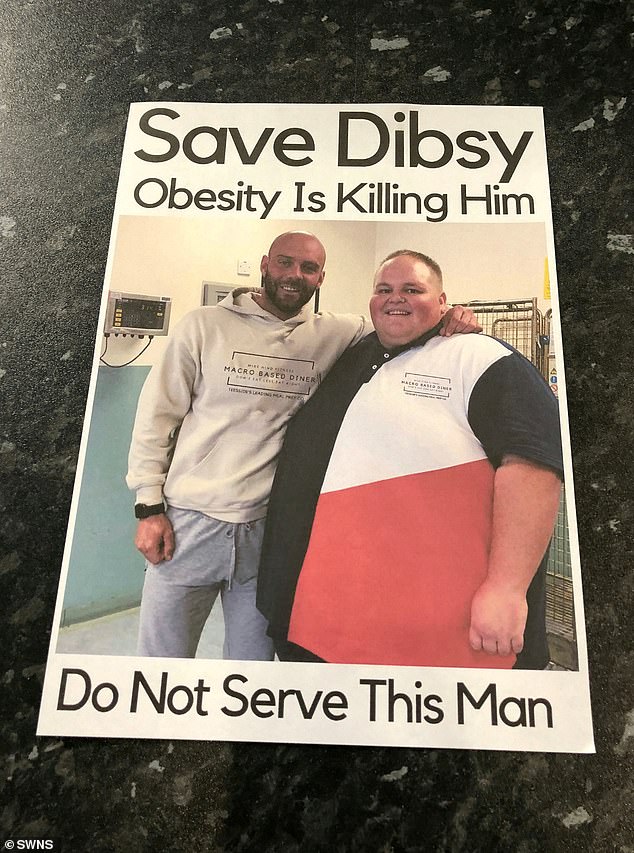 In a bid to help Dibsy, who was ‘eating himself to death,’ Mike distributed leaflets in local takeaways asking them not to serve Dibsy to save his life

The pair exchanged messages over Facebook before going on their first date, at a bowling alley, in August and becoming an ‘official’ couple a month later.

Overjoyed Dibsy, 28, said: ‘Jade is such an amazing girl. She’s so caring and is really supportive of my weight loss and what I’m doing.

‘The two of us just click and get on so well. It’s great to have someone like that in my life – 18 months ago I wouldn’t have thought it was possible.’

He added: ‘I’m definitely punching above my weight.’

Dibsy said Jade first messaged him over Facebook last October, right at the start of his weight loss journey, to say good luck. 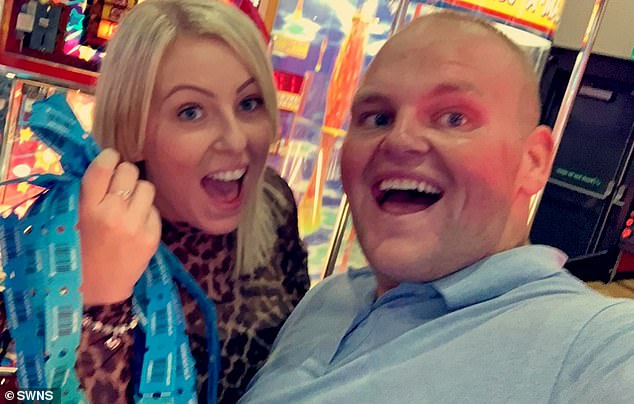 Dibsy garnered national attention after his weight loss. He revealed that he initially embarked on the journey in a bid to find love 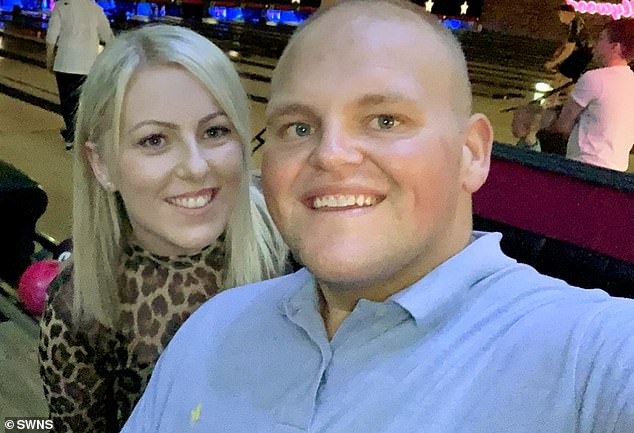 The couple (pictured) have been dating since August after connecting online. Jade, a nurse, had been following Dibsy’s progress online

‘It was nice to get the message and I replied saying thank you but I didn’t think much else of it,’ he said.

Jade reached out for a second time in July, when Dibsy conquered Ben Nevis alongside personal trainer Mike Hind for charity.

He added: ‘After Jade messaged me again we started chatting properly and got on really well so exchanged numbers.’

Within a few days the pair arranged to meet face-to-face and they went for a walk at a nearby beauty spot, which coincidentally is where Dibsy spread his dad’s ashes.

‘When she said she wanted to go there I knew it was meant to be,’ he said. 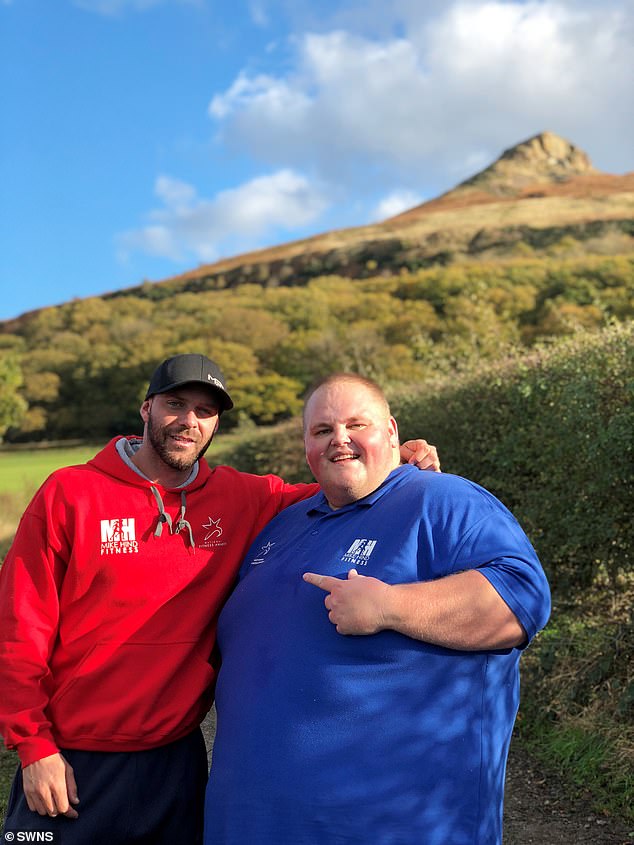 Dibsy used to weigh 40 stone at the beginning of his journey. Thanks to his hard work and the dedication of his personal trainer (pictured together), he now weighs half of that 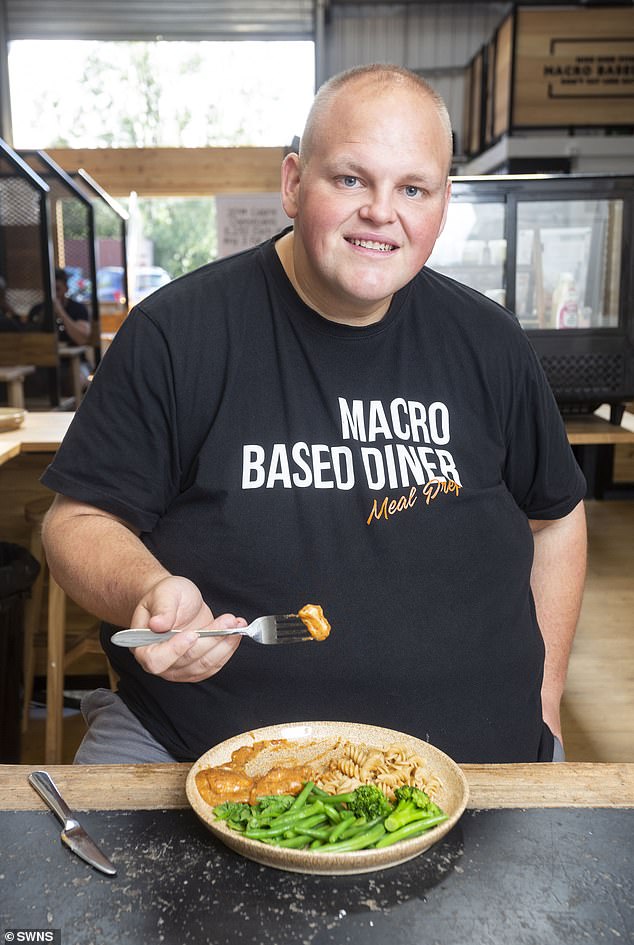 The young man explained Jade and him connected briefly on Facebook messenger when she wished him good luck on his weight loss journey. Pictured, Dibsy enjoying a healthy meal 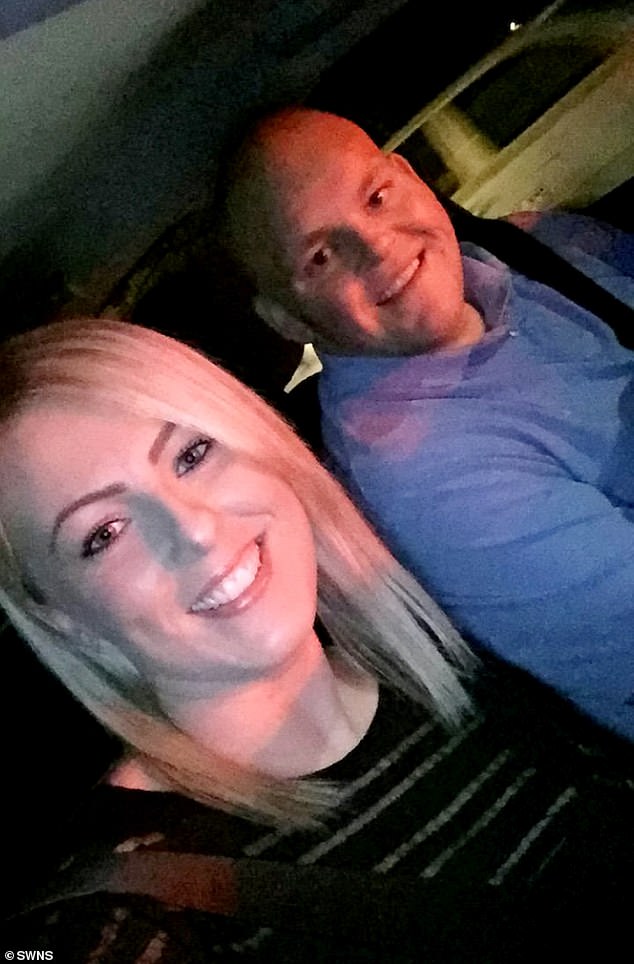 Jade kept following Dibsy’s progress and encouraged him online, which resulted in them chatting and eventually going on their first date together at the beginning of August (pictured together)

Their first proper date was at a bowling alley on August 2 and just over a month later the pair made their relationship ‘official’.

Dibsy said he was able to get on so well with Jade in the early stages because of a renewed self-confidence which has come about as a result of the weight loss.

‘My mindset now is completely different to how it was 18 months ago,’ he explained.

‘Before I wouldn’t have tried anything new because I was scared about what people would think of me.

‘But now I feel comfortable in my own skin and like I can just be myself, it’s an incredible turnaround.

Much of the Middlesborough man’s astounding success is down to personal trainer Mike Hind, who has been with Dibsy every step of the way.

Mike recently revealed in a TV interview that he had never seen a human as big as Dibsy walking. 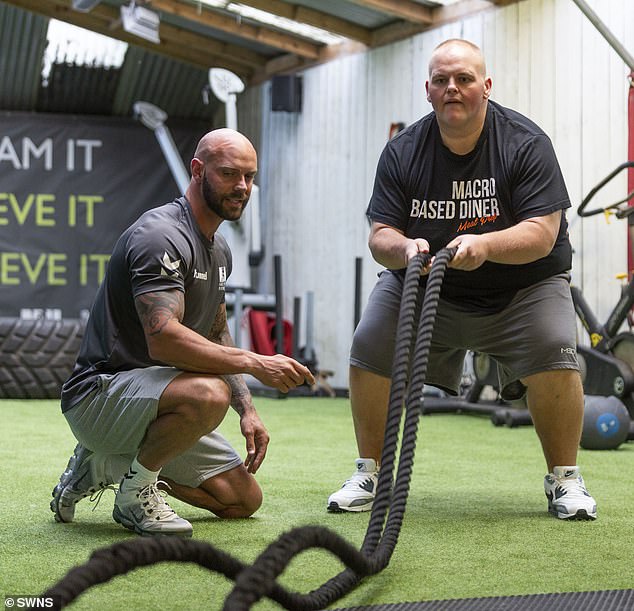 Mike said that Dibsy and Jade was a great couple, and that he was happy for him. Pictured, Dibsy working hard with Mike at the gym 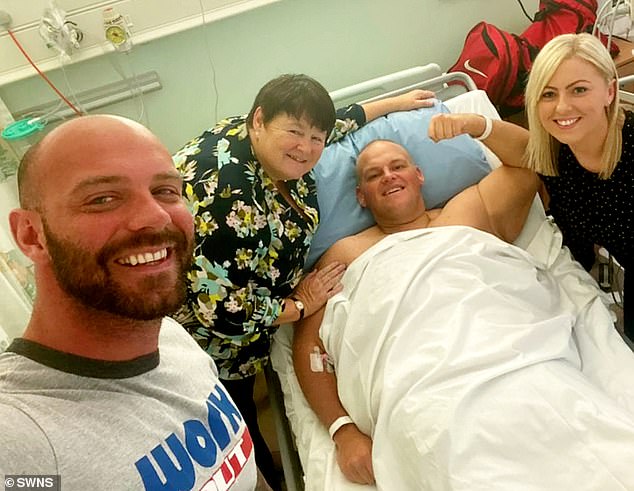 Recently, Dibsy suffered a set back and was admitted to hospital due to a irregular heartbeat, however, he bounced back. Pictured with Mike, Dibsy’s mother and girlfriend Jade

Mike revealed one of his client’s weight loss goals was to settle down with a girl. Pictured, Dibsy proudly showing off his progress

He said: ‘When Dibsy and I first started working together I asked him what he wanted to achieve.

‘He told me he wanted to meet a girl to settle down with, just like all his friends have.

‘To see him achieve that now after putting so much work in is incredible, I’m so happy for him.

‘It just goes to show what eating well and keeping fit can do for you, it’s completely turned his life around.’

Dibsy suffered a setback last month when an irregular heartbeat, which he had dealt with previously, returned and sidelined him from the gym.

He underwent an operation to fix the problem last week and, miraculously, he is already back on the treadmill continuing his weight loss journey.

Dibsy now has his sights set on the new year, when he plans to have three surgeries to remove excess skin which has been left as a result of the weight loss. 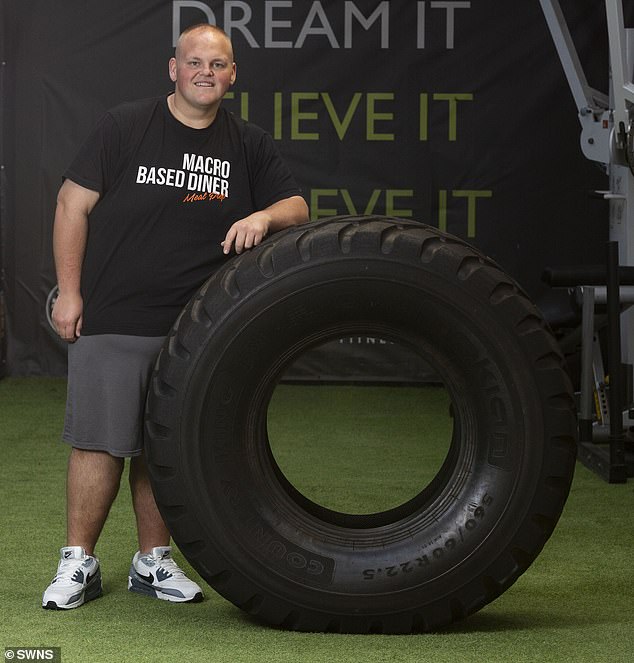 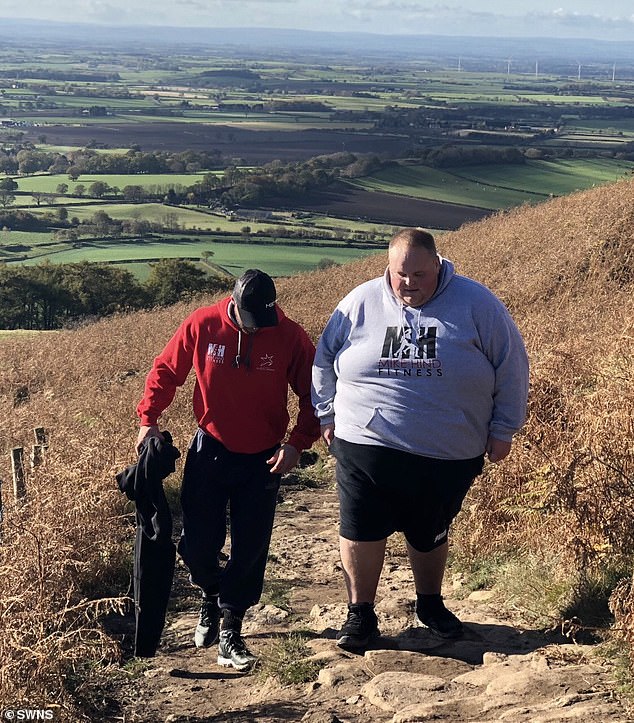 Pictured, Mike and Dibsy on a walk at the beginning of the weight loss journey. In a recent TV interview, Mike said he had never seen a human as big as Dibsy walking 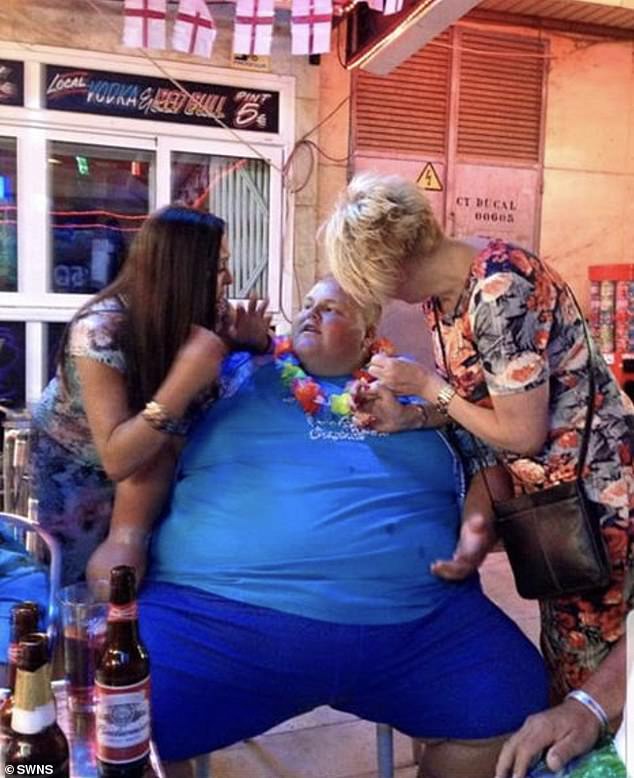 Dibsy has now shed half of his body weight in a year. Pictured, before he started his weight loss journey