Eating bad! Obese drug dealer caught with stash of Spice told police he only had ‘zombie drug’ because it helped him lose weight

An obese drug dealer caught with more than 100 grams of ‘zombie drug’ Spice claimed that he used the drug himself because it had helped him lose weight.

Colin Gibbs, 52, said that he smoked ’20 to 30′ Spice joints every day for more than two years so he could shed the pounds and that he wasn’t a dealer.

Portsmouth Crown Court heard police raided Gibbs’ home and discovered huge quantities of the synthetic class-B drug, which was made illegal in January 2016.

Colin Gibbs, 52, claimed that he smoked ’20 to 30′ Spice joints every day to lose weight – and not because he was a dealer

Officers discovered 101 grams of Spice in a safe along with 10 more grams in bags used for deals and £725 in cash during the search at his home in Portsmouth.

However ‘chronically unhealthy and overweight’ Gibbs, who used to work in a legal high shop, claimed Spice helped him lose 108kg.

A probation officer told Portsmouth Crown Court: ‘At the time of the offences Mr Gibbs had been using Spice for two and a half years.

‘He tells me he had a heart attack in 2010 and separately needed to lose weight.

‘In order to do this he was smoking 20 to 30 cigarettes of Spice a day. Since his arrest Mr Gibbs has told me he has stopped using Spice.’

The probation officer added Gibbs feels ‘foolish and stupid for taking the drugs’. 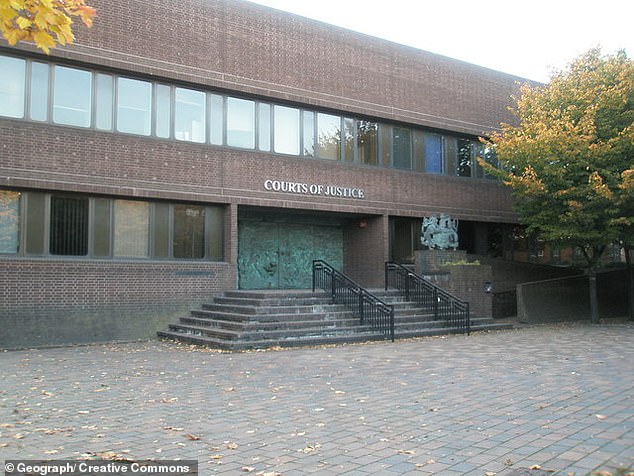 ‘This is a small scale operation by the defendant to fund his own habit.’

Gibbs, who claims employment support allowance and personal independence payment, also claimed he kept the drug in separate bags to help him know how much to take each day.

However, Gibbs’ claims were rejected by jurors who convicted him of two counts of possession with intent to supply. 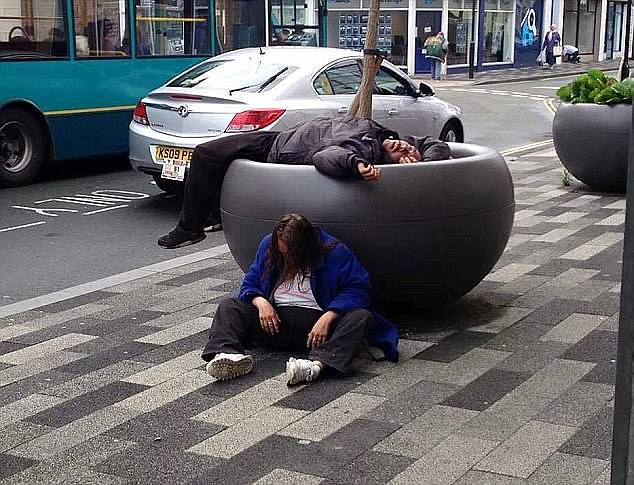 Spice users in Manchester. The drug gets the nickname the ‘zombie drug’ for the lifeless-like state it leaves users in 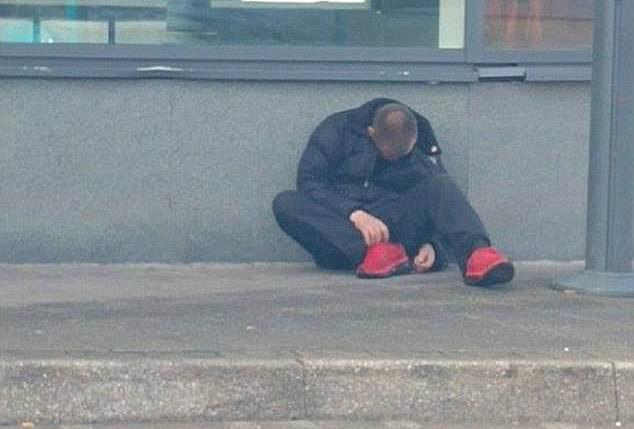 Judge Melville also ordered him to serve a four month tagged curfew running from 9pm to 6am.

He must also pay £500 prosecution costs and forfeit £400 of the seized cash. The drugs and paraphernalia, including scales, will be destroyed.

The court also heard Gibbs used to help out at the Gypsy King, a legal high shop in Portsmouth, when the store sold Spice prior to it becoming illegal.

Spice, which mimics marijuana, gets its nickname the ‘zombie drug’ for the lifeless-like state it leaves users in.

As addictive as heroin and crack, the drug costs just £5 per bag.

Smoking a single Spice joint is akin to smoking up to 100 containing normal cannabis – and addiction can take hold in just three days.

It has left addicts suffering severe psychotic episodes, hallucinations, vomiting and even seizures.

Ministers outlawed possession of the Class B drug, but there is confusion amongst police over whether those caught with it can be arrested.

Officers also say the drug has become more potent since supply shifted from shops to streets.

A global drugs survey found that hospital admissions as a result of taking the herbal substance Spice have increased by over one-third since 2014.

The drug’s relative cheapness has also made spice popular among the homeless and in prisons.

In Manchester, police and ambulance chiefs admitted they were struggling to cope with the number of call outs to spice users who were collapsing in the city centre daily. It is estimated that 96 per cent of the city’s young homeless are hooked on the drug.

It is also estimated that an ambulance is called to British jails every 42 minutes as a consequence of a spice epidemic in prisons.

Such psychoactive substances have also been linked to a rise in violence against staff and inmates, prisoner blackouts, seizures and heart attacks.

Each call-out costs about £300 so the bill for all incidents per year is over £4million.