January is a time for new beginnings, and for an electrician from Sulihull that couldn’t be more true.

Dann Sullivan, 30, from Solihull weighed 16 stone 12 lbs before deciding for his 2017 New Year’s resolution that he would get in shape.

Being a lifelong comfort eater, food had always been an issue for Dann who was overweight as a child and spent most of his adult life yo-yo dieting.

But since walking through the doors of his local Slimming World group this time last year, he now weighs he has lost an incredible 5 stone 2 lbs and eight inches off his waist – and been titled Mr Sleek 2018. 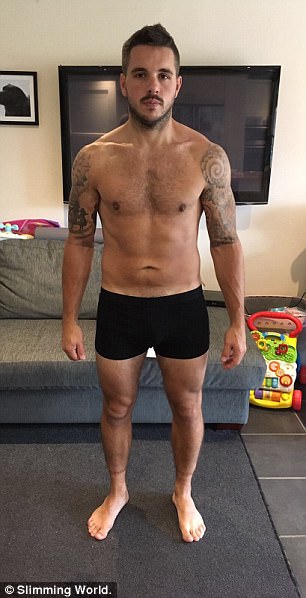 Before losing weight Dann, who lives who lives with his wife Rachel, 30, and daughters Emma, four, April, one, had cripplingly low self confidence and often felt like the ‘fat brother’ compared to his naturally slim sibling, Matt.

While Dann was active, with his job and sessions at the football club, his relationship with food was toxic. He said:  ‘I took comfort in food and was never really happy with my weight.

‘A soul-destroying moment for me came when I realised I wasn’t fit enough to run around on the football pitch and had to start playing in goal instead.’

‘At my heaviest I felt that I wasn’t as competent as I should be at work as an electrician either, I couldn’t do jobs as quickly or as efficiently as my peers and I often felt nervous about fitting through hatches or into tight spaces. Every night I’d come home exhausted and in pain, especially my back.’

As well as his own personal struggle, Dann realised that he needed to get healthy after he had a scare during a routine check up. 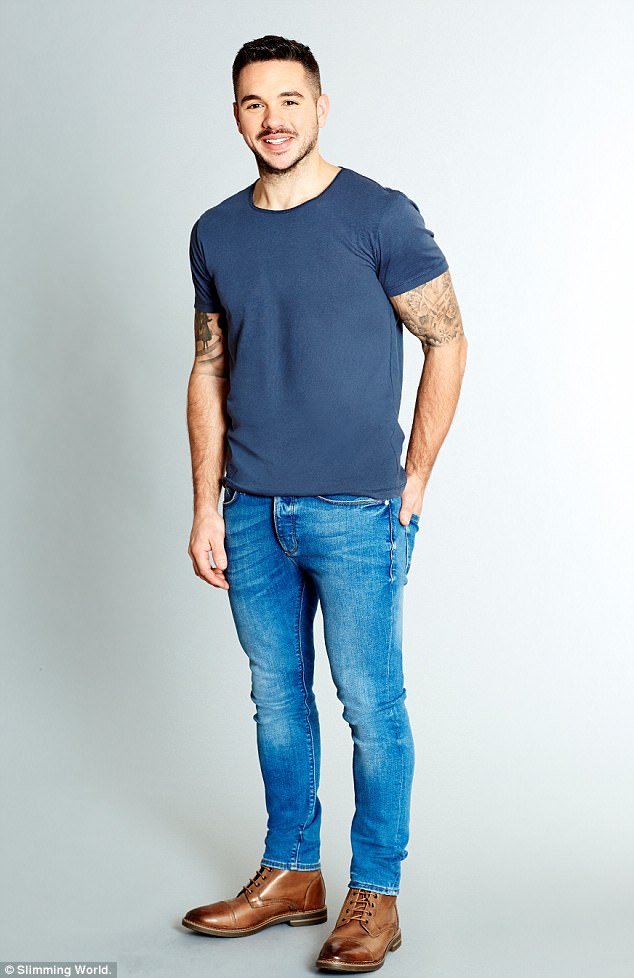 After struggling with his confidence and then being told by the nurse that he was obese, Dann decided to take action and lose weight (pictured after shedding 5 stone) 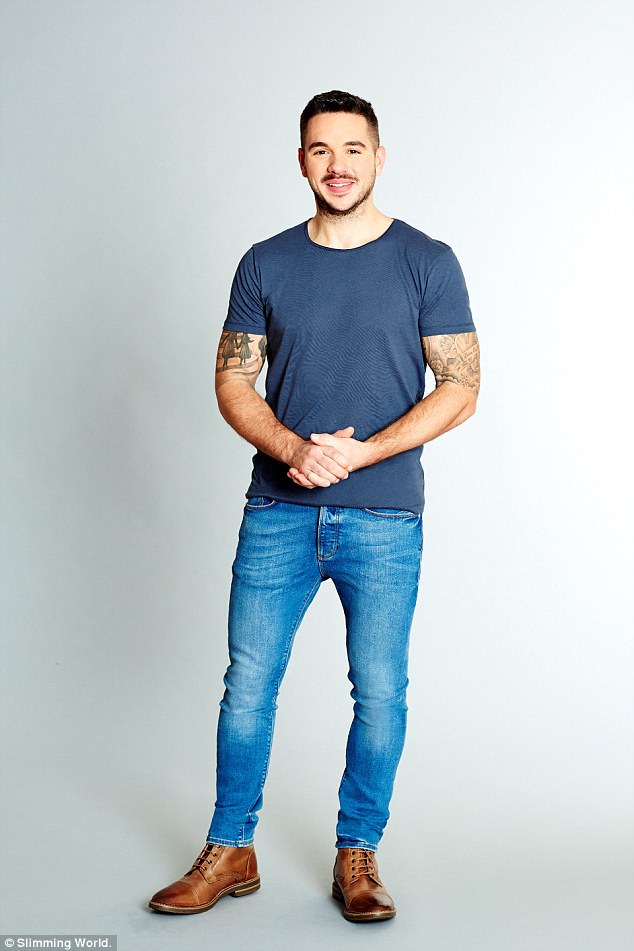 He was told by a nurse that he was medically ‘obese’ and his size was putting his health at risk.

The nurse offered him 12 weeks’ worth of Slimming World membership on the NHS through a weight loss scheme, but he was reluctant to join because he thought weight loss groups were only for women.

Rachel was also offered the membership, and immediately signed up. Still determinded to shed the weight, Dann spent a week eating the same meals as Rachel and was stunned to see that he had already lost 10 lbs.

Dann followed the eating plan he was given, which seemed to work well for him. He said: ‘Over many years I’d tried every diet under the sun, but for me that always meant not eating or eating less. 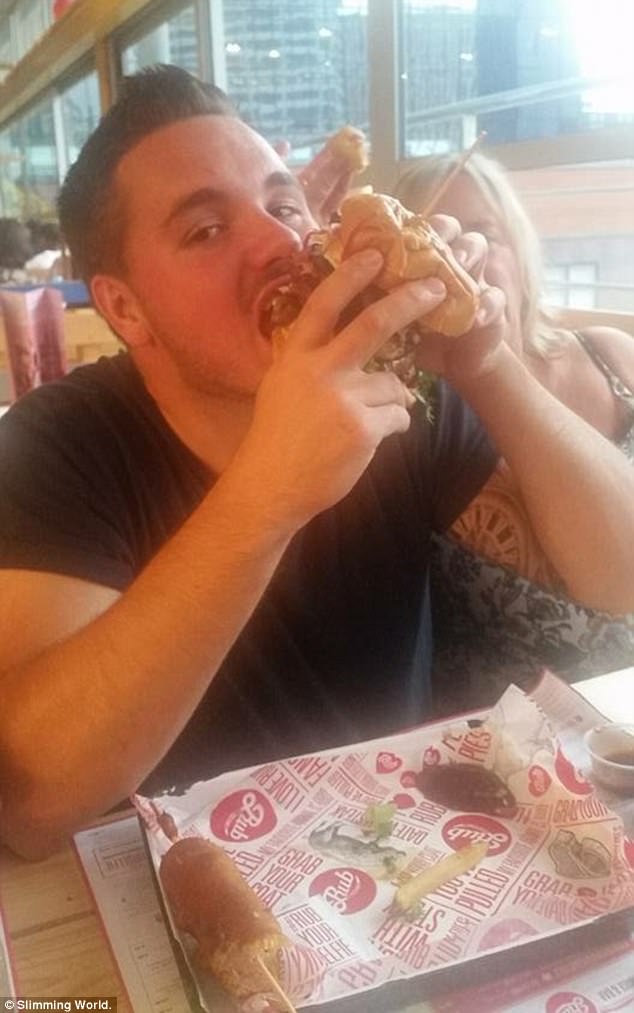 He has been overweight since childhood and revealed that he used food as a comfort. He spent his adult life yo-yo dieting

‘It was so restrictive that after a few months I’d lose interest and end up back at square one.’

In fact, Dann was so used to failing in his weight-loss attempts that when he joined the slimming club he didn’t tell any of his colleagues.

He said : ‘I’d yo-yo dieted for so long and every January it seemed like I started something new, so I feared that this might be short-lived too. I was so wrong though.

‘Within six weeks I was telling everyone I’d joined Slimming World and my colleagues were all asking how the weight was falling off me. They couldn’t believe I was eating as much as I was and losing weight. 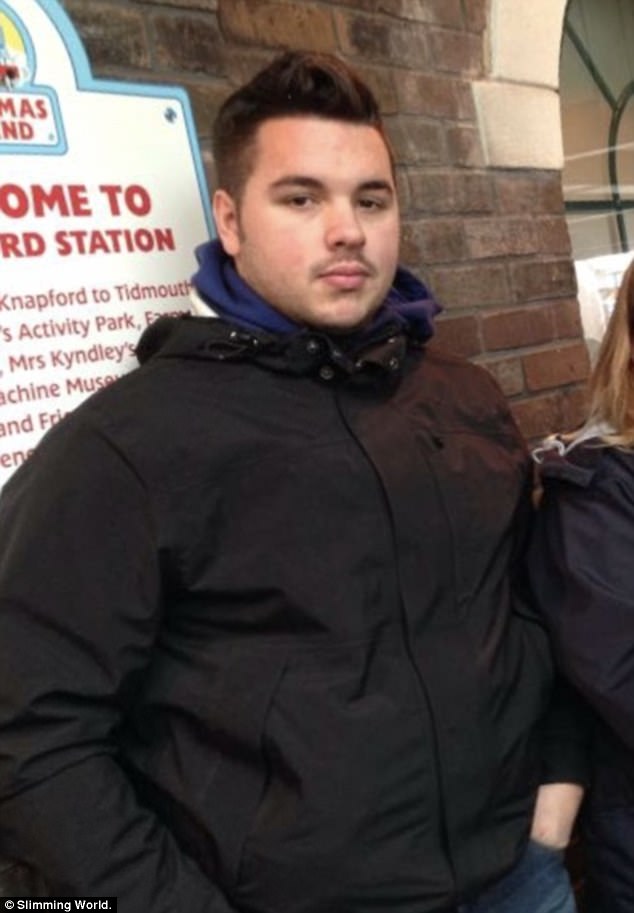 Dann, who works as an electrician found the work place banter difficult, and his weight would often become difficult when it came to fitting into tight spaces

While everyone else tucked into fry-ups I’d have a lean bacon sandwich on wholemeal bread and feel just as satisfied. I discovered a love for cooking and even cooked our Christmas dinner this year.’

As well as getting his position back on his football team, he has discovered a love for running and is training for a marathon in April this year.

‘Just watching my girls running around used to tire me out. Hearing the nurse say I was obese was a real eye opener, the thought that I was damaging my health and risking not being there for my daughters was devastating.

‘Now I feel like a new man. I have so much more energy to play with them and we love going on long family walks with our dog Maggie. I’m much fitter at work too – the only time I ache now is after a long run!’

He added: I’m in the best physical health I’ve ever been in and, more importantly, the best mental health too. I no longer take comfort in food and have found I can channel my emotions into activity, I feel confident and in control, and I believe in myself.

‘This time last year I thought I was starting out on another failed New Year’s resolution, but this year I’m proof that it is possible for a decision you make in January to change your life – mine did!’

DANN’S DIET BEFORE AND AFTER: