Obese man loses 350LBS without going to the gym

A man who used to drink right liters of cola every day has revealed how he lost more than 350 pounds by ditching the sugary beverage and fast food, eating home-grown vegetables – and avoiding exercise.

Morbidly obese Zach Moore, 39, from Florida, weighed a staggering 500 pounds in December of 2013, when he was struck down by food poisoning so severe that he thought he was going to die.

As it turned out, the terrifying experience, which saw him shed 60 pounds in a matter of days, was exactly what Zach needed to transform his life, and his body, by kicking his unhealthy habits once and for all.

Unhealthy: Father-of-one Zach Moore, 39, was morbidly obese for years – with his weight reaching 500lbs in 2013 when he was at his unhealthiest 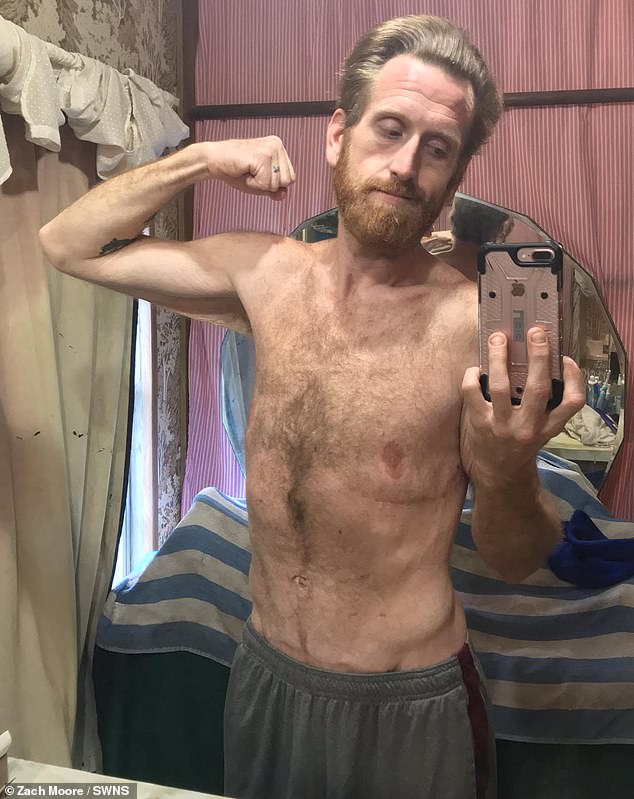 Transformed! The Florida native has revealed how he shed a staggering 330lbs with the help of a gastric bypass and having his excess skin removed 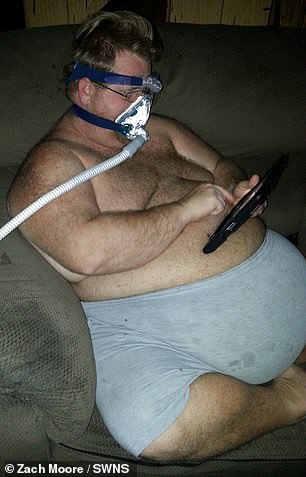 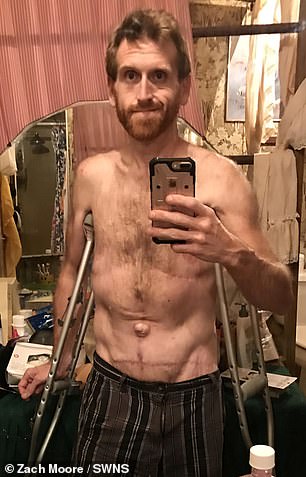 Inspiration: Zach was first motivated to get fit and healthy after suffering a horrific bout of food poisoning after eating a meal at Panda Express – which saw him lose 60lbs in a week

When he was at his heaviest Zach’s diet consisted almost entirely of fast food.

‘For breakfast, I’d probably eat three or four Egg McMuffins with a two-liter bottle of Coca-Cola,’ he admitted.

‘For lunch, we’d eat pizza. Going to Pizza Hut and getting one pie for myself and one for the family was normal.

‘Dinner would be something like French fries and hotdogs and hamburgers.

He vowed to change his eating habits after one particularly huge meal landed him in hospital.

‘I stopped and got Panda Express and a family meal and I ate a whole thing of orange chicken,’ he revealed.

‘I got food poisoning and lost 60 pounds in a week.

‘It was all vomiting and diarrhea. While I was in the hospital, I started to think ‘I’m gonna die.’

‘I actually recorded a goodbye message to my son and my wife. That’s when I committed to myself and put effort behind losing weight.

‘I knew that obesity kills. I didn’t want my son to be visiting my tombstone. I didn’t want to put my kid through that. I just wanted to be a better dad. 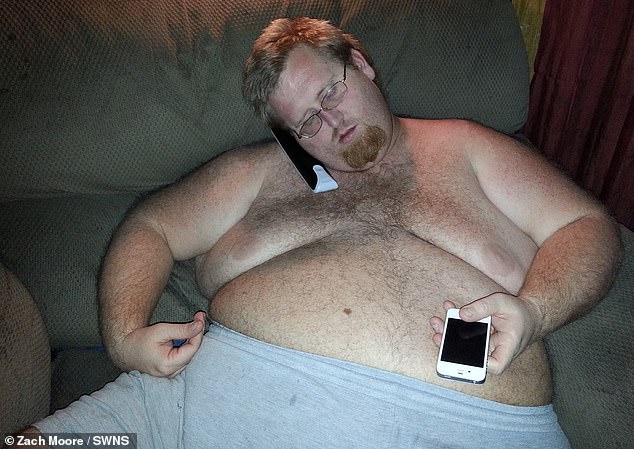 Bad habits: Before his food poisoning, Zach would gorge on three fast food meals a day, while also downing eight liters of cola on top of it 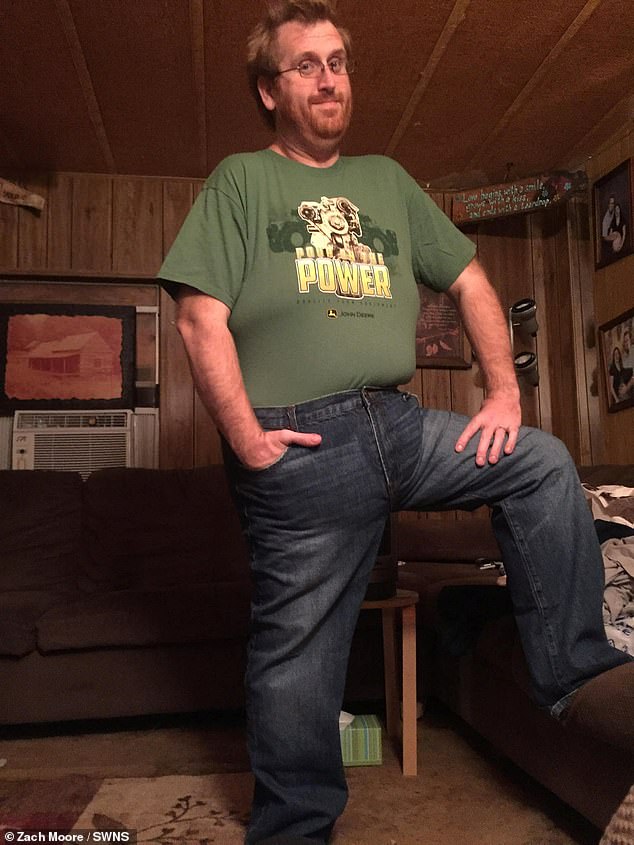 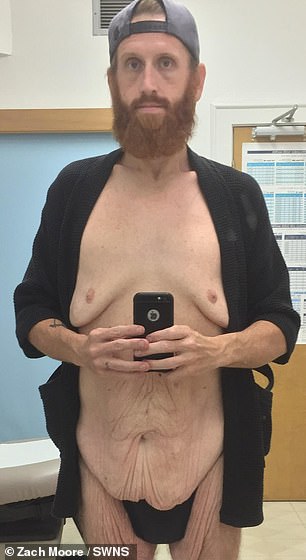 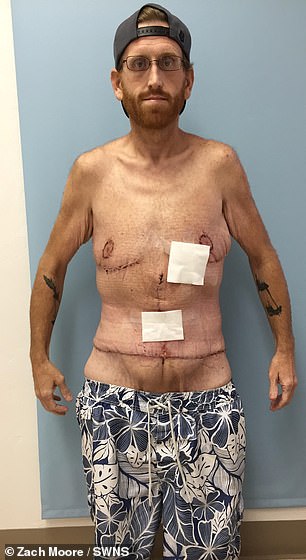 The final step: Months after his gastric bypass, Zach underwent surgery to remove his excess skin, which helped him to finally achieve the body he had been working towards

‘I couldn’t teach him anything or play with him. It was terrible.’

Zach cut carbs, beef, and pork out of his diet in early 2014 in order to lose enough weight to qualify for gastric bypass surgery.

By the time of his surgery in May 2014, he was down to 392 pounds, but despite his weight loss, the surgery was complicated.

‘My surgery was supposed to be two hours, but it lasted seven,’ he explained. ‘I flatlined on the table and was fatter than the doctor thought.’

After surgery his weight plummeted further.

Zach has managed to maintain that weight ever since his gastric bypass, revealing how he completely transformed his diet in order to stay in shape without ever having to workout or visit a gym.

He now runs a farm and grows his own vegetables, which means he can ensure that he is eating a totally natural, healthy diet.

‘I understand nutrition now. If food has high fructose corn syrup in it, I won’t touch it.

‘If it has a lot of sugar, I don’t touch it. I avoid soy, wheat and gluten. I do a mix of keto and paleo nutrition. 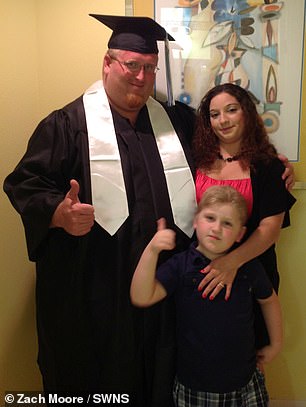 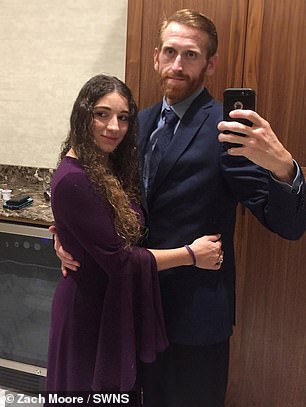 Keep it up! Since his gastric bypass, Zach, pictured with his son and wife, has kept his weight loss up thanks purely to a new diet – revealing that he doesn’t ever workout or go to the gym 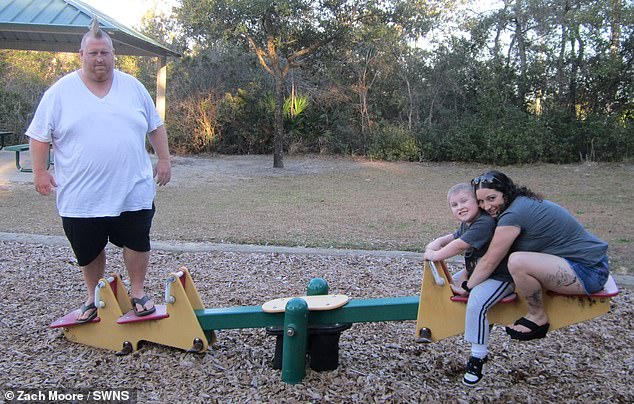 Inspiration: The father-of-one said he finally realized how dangerous his weight was when he got food poisoning – which he thought might kill him 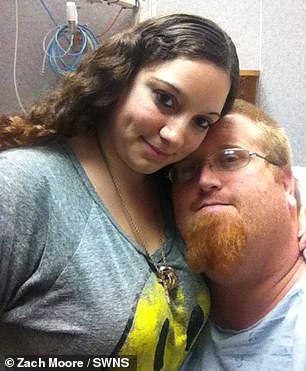 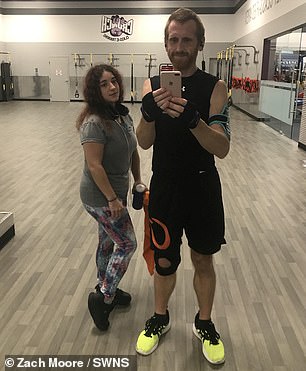 Stay strong: ‘I knew that obesity kills. I didn’t want my son to be visiting my tombstone,’ he said

Zach then had surgery to remove his excess skin.

‘That was terrible. I was under anesthetic for nine hours. I had 2,400 stitches,’ he recalled.

‘They did a butt lift. They went up my sternum. They went into my armpits and reduced the breast size.’

He has now taken to farming and attempts to lead a self-sufficient lifestyle.

‘We grow beans, sprouts, tomatoes, really anything that I like.

‘My wife is into garlic and onions. She grows onions and potatoes. Right now we’re also growing green beans, celery, and garbanzo beans.

‘I miss candy. I had a sweet tooth. If I smell fried food at the fair and stuff, the aromas are amazing, but I don’t desire food like I once did.

‘When I was heavy, I didn’t expect to live until 40, and that’s in six months.

He thanks his wife, Amber, for sticking with him through his weight problems.

‘Without her, I would have failed,’ he said. ‘I know that.

‘She drove me to every surgery. Amber’s always been there. She’s been my everything.’