The study, which looked at more than one million adults, found that during a routine cardiac procedure, underweight patients were five times more likely to die than those who were obese.

Obese patients were also more likely to survive than patients of normal weight, according to the US study presented at the European Society of Cardiology Congress in Barcelona.

The study tracked patients for 30 days after cardiac catheterisations, procedures used to investigate and unblock narrowed arteries, and looked at readmission and lengths of stays at hospitals as well as which weight class had the highest death rates.

A US study, which looked at more than one million adults, found that during a routine cardiac procedure, underweight patients were five times more likely to die than those who were obese

About 100,000 of such procedures, using balloons and stents to keep the arteries open, are performed in England each year.

The research, which looked at patients BMIs to establish their weight class, did not establish why those who weighed more were more more likely to survive the cardiac procedures.

One theory, however, is that people who weigh more have larger energy reserves than thinner patients to help fight disease.

Another theory  is that obese patients often seek medical advice earlier in the disease process because they are out of shape and suffering other symptoms, which gives doctors the chance to diagnose problems earlier.

Underweight patients had the highest rates of death and the longest stays in hospitals as well as highest rate of readmission.

Overweight and obese patients were the least likely to return to the hospital. 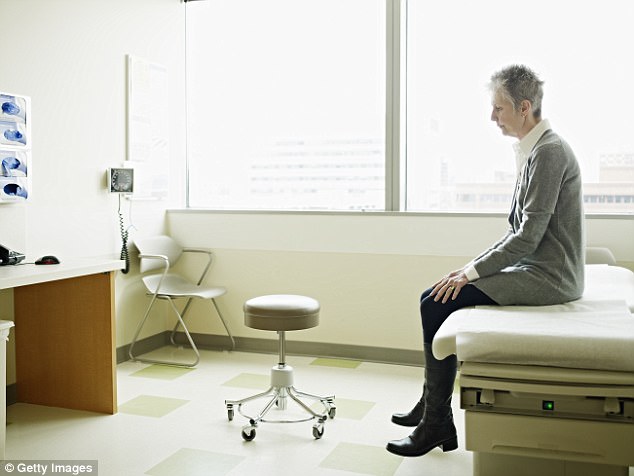 About 100,000 of catheterisations, procedures used to investigate and unblock narrowed arteries, are performed in England each year

Lead author Dr Afnan Tariq, an interventional cardiology fellow, from Lenox Hill Hospital, New York, said: “The obesity paradox has flummoxed researchers for some time, and our research also flips the conventional wisdom that a higher BMI should portend a worse outcome.

“We found that the lower BMI group had worse outcomes across the board, including readmission, length of stay, cost, and mortality.”

The doctor suggested that when it comes to catheterisations the lower the BMIs ‘the harder they fall’.

Obesity continues to be an epidemic across the globe, with a recent global report revealing nearly a third of the world is obese or overweight.

The World Health Organization said the issue has become a ‘disturbing global public health crisis’, which is contributing to booming rates of diabetes and heart disease.

Excess weight is already contributing to one in every 14 deaths from any cause, the researchers found, a figure which they said is bound to rise.

In addition to unhealthy weight causing mobility issues, obesity causes a slew of health conditions and is known to limit lifespan.

Being overweight or obese has also been proven to lead to strokes, heart disease, hypertension and high blood pressure.