Overweight workers should be allowed to start work later to avoid the rush hour crush, a government adviser suggests

Overweight workers should be allowed to start work later to avoid the rush hour crush, a government adviser suggests.

Letting obese staff who feel anxious about travelling on public transport arrive an hour later, or work from home, would help their mental health, an employment expert said.

Stephen Bevan, of the Institute for Employment Studies, said obesity should be treated in the same way as other health conditions.

He is calling for it to become a ‘protected characteristic’ such as age or gender to stop workplace discrimination.

But critics said taking special measures was actively encouraging people to be overweight.

At the world’s biggest obesity conference in Vienna, Mr Bevan told scientists that employers needed to be more sympathetic.

‘We need to co-ordinate our efforts so that people who want to work can do so,’ he said.

‘It can be working time, it can be having a bit of understanding that someone might need to turn up at 10 o’clock because they have trouble with transport or anxiety about transport.

‘I don’t think enough [employers] regard being overweight and obese as part of the family of conditions or impairments that they need to do something about.’

Britain’s obesity problem is the worst in western Europe. Two-thirds of adults and a third of children are overweight.

Experts warn it is fuelling a rise in problems such as diabetes and heart disease.

Obesity is expected to overtake smoking as the top cause of cancer in 20 years.

But while people with other health problems are treated sympathetically, those with obesity are often blamed, Mr Bevan said.

It follows a survey of 700 GPs which found more than half of UK doctors thought overweight patients lacked willpower. 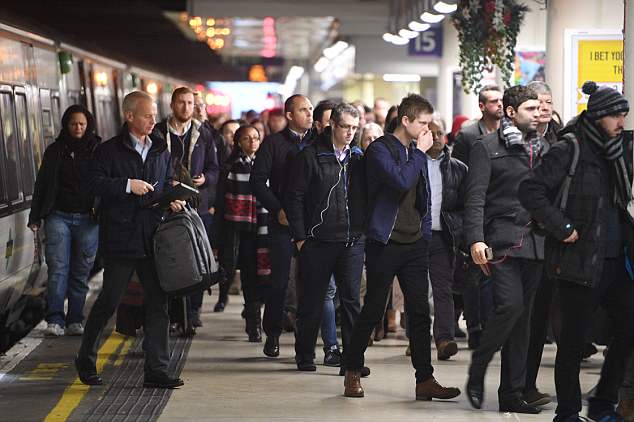 Letting obese staff who feel anxious about travelling on public transport arrive an hour later, or work from home, would help their mental health, an employment expert said

One in three said they were too lazy to keep the weight off.

Mr Bevan added: ‘Some people say that obesity is the last characteristic that it’s still socially acceptable to make fun of … There is a widespread belief among doctors, employers and society … that obesity is self-inflicted and is a lifestyle choice.

‘That makes it quite different from if you have cystic fibrosis or cerebral palsy – no one says it’s your fault. That affects the extent to which employers are prepared to make the effort.

‘They don’t believe making adjustments for people with obesity is as important or deserved as someone with what they regard as a “proper disability”.’

But Chris Snowdon, head of lifestyle economics at the Institute of Economic Affairs, said: ‘This is a ludicrous idea that will only create resentment against obese people.

‘Being fat is not a disability and the majority of people get to work by car so it is difficult to see why obese people should be given an extra hour to arrive.

The number of morbidly obese Britons is set to double to five million by 2035.

Researchers from the UK Heart Forum and Institute of Technology said Wales is expected to have the highest levels at 11 per cent, compared to eight and five per cent in England and Scotland respectively.

One in 12 women in England will be in the heaviest group, compared to one in 14 men.

GPs should prescribe an eight-week diet plan that replaces breakfast, lunch and dinner with specially-formulated supplements such as milkshakes, soups and meal bars.

An Oxford-led study found slimmers on such diets – only 800 calories a day – went on to lose more than a stone and a half.

Study leader Nerys Astbury said: ‘We have grown up in an environment where we have food everywhere … I think these people are overweight because they have an unhealthy relationship with food. We take food out of the equation.’

In the study of 278 obese adults, 61 per cent of whom were women, half were put on the Cambridge Weight Plan involving milkshakes and meal bars, for eight weeks, with food gradually reintroduced at the end.

They were also given support by a counsellor, dietician or group sessions.

The rest were given standard weight loss advice by the NHS.

A year later, those who ate meal replacements had lost an average of 22lb, while the lost just 7lb.

Other programmes such as Lighter Life, Optifast and Counterweight Plus would yield similar results, the researchers said.