Obesity is a major factor in 40% of US cancers

Nearly half of all cancers diagnosed in the US are linked to obesity, a new report reveals.

Even as overall cancer rates declined steadily in the US between 2005 and 2014, rates of obesity related cancer continue to creep up, according to a new report from the Centers for Disease Control and Prevention (CDC).

Diagnoses of nearly all cancers associated with unhealthy weights and obesity increased by seven percent between 2005 and 2014, and account for 40 percent of all cancers.

Of these cancers, about 42 percent were cancer’s specific to women, whose fat exposes them to estrogen, putting them at greater risk for certain cancers.

Obesity-related cancers account for 40 percent of all cancers in the US, and most are on the rise, even as overall cancer rates fall

Rates of all other cancers, unrelated to overweight and obesity, fell by 13 percent in the same time period.

Outside of women-specific cancers, non-Hispanic white and non-Hispanic black men were at the most elevated risk for obesity-related cancers.

Obesity has been widely recognized as an epidemic, now affecting about 35 percent of all Americans. Its rates have been marching steadily upward for decades now.

But, the CDC says in its report that about half of the Americans it surveyed are unaware that obesity is a significant risk factor for 13 kinds of cancers, including breast, pancreatic, colorectal, endometrial, kidney, liver and thyroid cancers.

In fact, the CDC added eight obesity-related cancers to its list just last year, so it’s even less likely that public would know that obesity can lead to meningioma,multiple myeloma, and endometrial, ovarian, liver, thyroid, gallbladder and upper stomach cancers.

These new additions were part of the reason that the CDC decided to conduct this study now, says Dr. Lisa Richardson, the director of the CDC’s Division of Cancer Prevention and Control in Atlanta, Georgia.

The public ‘can’t do anything about it if [they] don’t know what the causes are,’ she says.

As of 2014, there was a particularly significant increase in incidence in relatively young people, aged 20-49, as well as those aged 50-64.

The CDC report highlights the fact that rates for one obesity-related cancer, colorectal cancer, have fallen, and attributes this to more widespread screening for the disease. It estimates that nearly 225,000 cases of the cancer have been avoided since 2005. 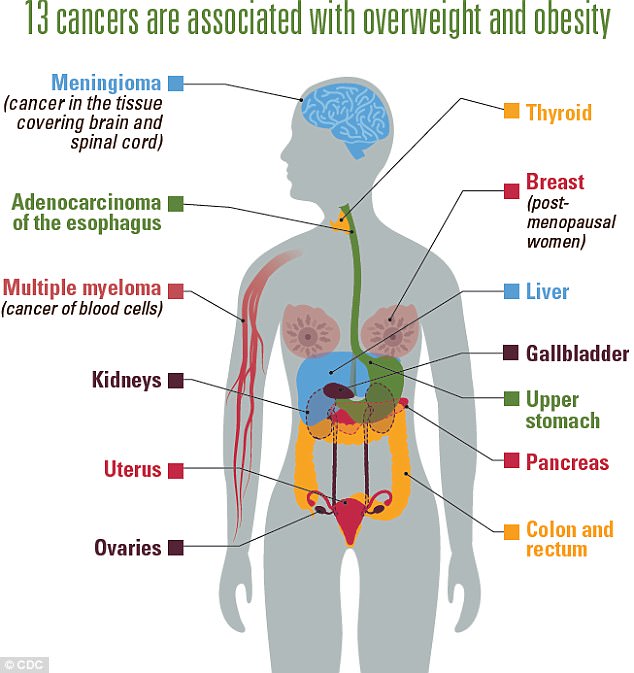 The CDC added eight new cancers to its list of those related to obesity last year, bringing the total to 13 cancers, displayed here

Rates of other obesity-related cancers increased or remained stable in all 50 states and Washington, DC.

Dr Richardson expected that the report would show an increase in these cancers, but says she wasn’t prepared for it to be such a large one.

‘We have a clear obesity epidemic that has been ongoing for several decades,’ says Dr Theodore Brasky of the Ohio State University (OSU) Comprehensive Cancer Center.

‘Even a 2 percent increase in [postmenopausal] breast cancer, when it’s so common, can have significant implications for health,’ says Dr Brasky.

Postmenopausal breast cancer is the most common form of cancer. Breast cancer and endometrial (the uterine lining) cancers are both ‘thought to be hormonally responsive,’ says Dr Brasky. After menopause, women are exposed to more estrogen, which is, ‘itself a sort of carcinogen, coming, essentially, from a woman’s fat,’ he says.

Although there are certainly other factors at play, this is why overweight and obesity are such significant issues for cancers specific to women, and why the CDC’s report found particularly high percentages of these cancers.

The report recommends that ‘obesity screening’ be improved, and points at the efficacy of colorectal cancer screenings.

Screening for obesity is both far simpler and far more difficult than are polyp screenings, however.

A body mass index (BMI) of over 30 is considered obese. A BMI is calculated by dividing a person’s weight in kilograms by their height, in meters, squared.

These are vital statistics that a doctor or nurse takes for a pateint at nearly every doctor’s appointment.

For every unit of increase in BMI, the associated risk for cancer increased by between one percent and nine percent, depending on the type of cancer, according to the CDC report. 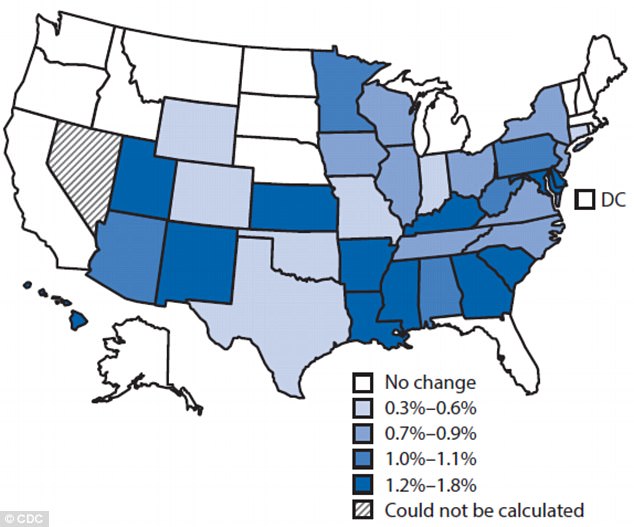 ‘There’s a stigma, and a lot of doctors are uncomfortable talking about it, and not sure what to recommend.’

She says that doctors should be recommending healthy lifestyles, diets, exercise and should refer people to services for ‘intensive behavior or diet modification.’

She says that these services are less expensive than, for example, surgical procedure.

‘They’re not as widely available as we’d like them to be. But there are guidelines available,’ through the CDC itself and other resources.

Still, the experts say that preventative care is the best way to address the obesity epidemic and the cancers that follow it.

‘We want treatment, in this country,’ says Dr Brasky.

‘It may be the easy way out; we want to cure cancer. But the fact is that [prevention] is by far more cost-effective, and from a public health perspective, a more effective strategy to prevent cancer from starting,’ he says.

He’s sympathetic to those that have already been diagnosed – ‘they don’t want to hear about prevention, they want to hear about treatment, of course’ – but says that we need to focus on healthy lifestyles and balanced diets instead of ‘the huge quantities we eat’ in the US.

‘We need health care providers to be aware, we need to be making neighborhoods more walkable and safe, to have physical activities in schools,’ says Dr Richardson.

‘There’s something everyone out there can do, and it’s going to take all of us working together to make it happen,’ she adds.