Obesity will overtake smoking as the leading preventable cause of cancer in women within 25 years, experts warn.

Rising obesity levels combined with falling smoking rates will see the two switch places by 2043, when 26,000 cases will be blamed on bulging waistlines. The shocking rise is because women are prone to more obesity-related cancers than men – including breast and womb cancer.

Study predicts that by 2035 figures are expected to show the number of cases caused by obesity rocketing to 23,000. Stock image of an obese woman

The figures led to calls for official health campaigns to focus as much on the dangers of excess weight as smoking.

Professor Linda Bauld of Cancer Research UK, which carried out the study, said: ‘Obesity is a huge public health threat right now, and it will only get worse if nothing is done.

‘The decline in smoking is a cause for celebration. It shows how decades of effort to raise awareness about the health risks plus strong political action including taxation, removing tobacco marketing and a ban on smoking in indoor public places, have paid off.

‘But just as there is still more to do to support people to quit smoking, we also need to act now to halt the tide of weight-related cancers and ensure this projection never becomes a reality.’

The predictions were made using current statistics on obesity and smoking in UK adults. Simon Stevens, chief executive of NHS England, said obesity is the ‘new smoking’ and one of the ‘greatest public health challenges of our generation’

By 2035 figures are expected to show the number of cases caused by obesity rocketing to 23,000, while falling rates of smoking will see a smaller rise in cancer-related cases to 25,000.

A quarter of a century from now in 2043, with obesity continuing to rise, the two are expected to switch places. The study’s projections for men also show excess weight soaring as a cause for new cancer cases – from 9,600 now to 18,000 by 2043, compared with a smaller rise in smoking-related cases from 32,200 to 34,000.

But while researchers found that more males than females are overweight or obese, women are at particular risk because of its links to particular cancers.

Being overweight increases the risk of 13 types of cancer including bowel, liver and kidney.

But a shocking one in ten breast cancer cases and one in three womb cancer cancers in Britain are now linked to obesity.

Simon Stevens, chief executive of NHS England, said: ‘Obesity is the new smoking, one of the greatest public health challenges of our generation, placing people at much greater risk of cancers, heart attacks and other killers.

‘Expanding waistlines also mean a heavier burden for taxpayers which is why, as we draw up a long-term plan for the NHS, we are exploring all options to help patients to help themselves and help the NHS.’

Two-thirds of British adults are overweight or obese. While smoking rates have been steadily falling, the changing picture in terms of cancer cases will not be seen for some time as it typically takes smokers around 30 years to develop cancer.

Increased risk of MS from cigarettes

The MS Society has reviewed research into the link between smoking and the incurable condition affecting the brain and spinal cord.

Quitting the habit could delay the onset of untreatable secondary progressive MS by as much as eight years, one study revealed.

Some 89 per cent of MS sufferers do not realise the risk, a recent poll found, despite official guidance advising healthcare professionals to tell patients as soon as they are diagnosed. 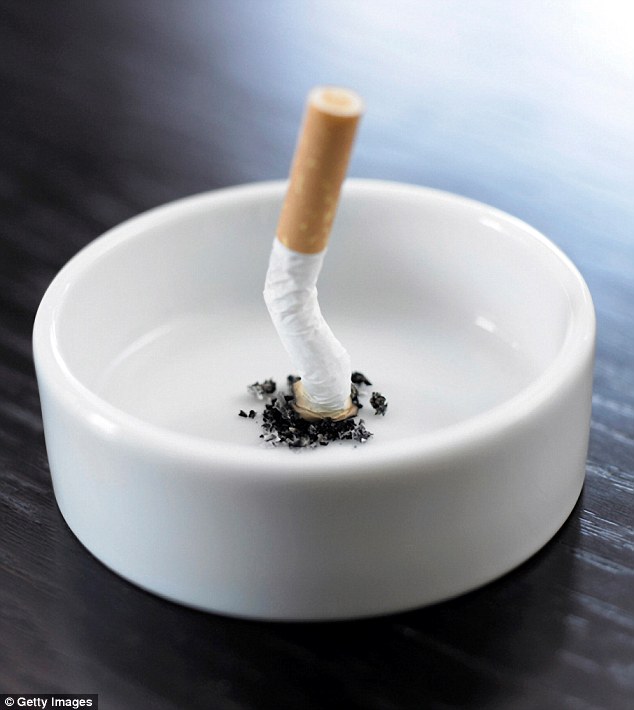 Dr Susan Kohlhaas, from the charity, said: ‘It’s clear smoking can make MS worse and harder for the brain to fight the condition. It’s not just people who have MS who need to be aware of this, though, as people who smoke are more likely to develop MS than people who don’t.’

Smoking can cause further damage to the myelin sheath, a protective layer around the nerves, which is affected in MS patients. This affects vision, mobility and cognitive functions.

There are also links between smoking and brain lesions. The increase in damage could explain why MS patients are less able to fight it or suffer worse symptoms at an earlier stage.

Smoking can also affect how effective treatments are, so people suffer more relapses.

Dr Waqar Rashid, from St George’s Hospital in south London, said: ‘Knowing that continuing to smoke might impact the disease could make a radical difference to some people.’