Dockless bike sharing system companies have been relentlessly bashed ever since introducing their ‘revolutionary’ services to Australia.

Bicycles have proven a major hazard and become a constant target of outrage as photos of them damaged and inappropriately dumped continue to surface.

The latest in the increasingly frustrating saga comes as more were pictured being left in bizarre locations over the weekend.

An Obike was pictured propped on its stand inside double white lines in the middle of a road in Sydney, while another was shown thrown onto the middle of a train track in Melbourne.

In separate threads displaying the photos on Reddit, disgruntled public members made their disapproval of the ‘highly infuriating’ system known.

‘Could we stop acting as if this is some sort of reflection on Australian society and just acknowledge that the system that these bike companies run on is stupid and easily abused by idiots, which are not bound to a single nation,’ one user argued.

The brand of discarded bikes also left many wondering why they tended to be from the same company.

‘There is three bike companies but we only see Obike bikes being mistreated, I find it quite odd,’ one user pointed out, referring to Sydney.

Another chimed in suggesting the basic bike structure could have something to do with the specific company being targeted. 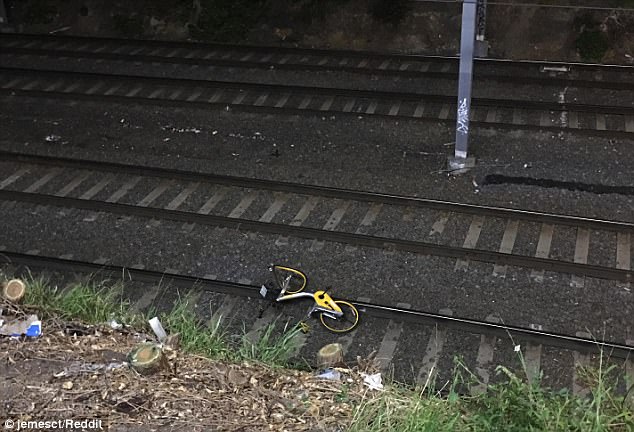 An Obike was shown thrown on the middle of a train track in Melbourne, sparking safety fears

‘OBikes don’t have any gears so they struggle on anything resembling a hill, that may be part of the reason.’

Explaining potential reasons behind people abusing the systems, one user said it was a sign of protest that people didn’t like things cluttering ‘already confined’ areas.

Adding: ‘Or it could be an aversion to private interests taking over public spaces.’

One sarcastically commented that the gap between the two middle lines was ‘a really narrow bike lane.’

The bike dumped on a track in Melbourne sparked fears it could derail a train and potentially have dangerous implications for people travelling.

‘Bike on the train tracks at South Yarra – cmon, Melbourne this is dangerous now,’ the post’s headline read.

Users were evidently fed up, arguing the abuse of the bikes had gone too far.

‘Sh**, that looks dangerous as hell… Could something like that cause a train to derail? (I wouldn’t know)… Some people really just don’t care,’ one wrote.

A Melbourne local confirmed the issue was getting out of hand on the Sydney post.

‘I’m in Melbourne and people down here throw them off bridges, onto train tracks, slash the tires, dismantle them, burn them – you name it,’ they wrote. 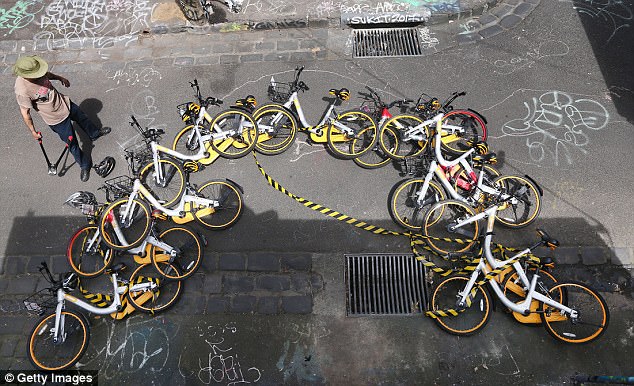 Users were evidently fed up, arguing the abuse of the bikes had gone too far