Three teenage Gladys Berejiklian super-fans frightened the ex-NSW Premier after following her down an alley to demand a selfie.

In a video posted to social media the teenagers were walking down a busy road in Sydney on Sunday when they spotted Ms Berejiklian ahead of them.

The three teenagers spotted Gladys Berejiklian out for a walk in Sydney (pictured) and chased down the former NSW premier for a photo. In a video posted to social media, the super-fans were spurred on in their pursuit after Ms Berejiklian turned and smiled

The group of girls are seen running and are spurred on in their pursuit after Ms Berejiklian turned and smiled.

‘She smiled at us,’ another girl said.

Ms Berejiklian is later seen grinning and posing for a selfie – but only after the fangirls startled her in an alley off-camera.

‘I accidentally scared her in an alley,’ user lily_a_hunt commented.

The video posted to lily_a_hunt’s TikTok account has received over 43,500 views with users amused by the trio’s antics and dubbing Ms Berejiklian a ‘queen’.

‘This is the funniest thing, what a queen,’ one user commented.

‘I’m so jealous, you met the queen herself,’ another user wrote.

‘Still the queen of NSW in my opinion,’ a third user chimed.

Other users were not amused by the celebrity meet-and-great and criticised Ms Berejiklian over the ICAC’s investigation into her ex-boyfriend, Daryl Maguire. 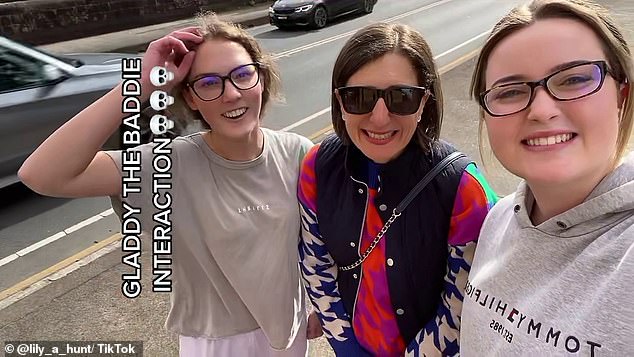 Ms Berejiklian was all smiles as she posed for a selfie with two of the teenage girls (pictured) after they accidentally scared her in an alley off-camera. The video posted to TikTok, captioned: ‘Gladdy the baddie interaction’, has received over 43,500 views

The former premier abruptly resigned from office after the Independent Commission Against Corruption launched an investigation into her ex-partner, and now-ex-MP, Mr Maguire.

The ICAC has not handed down its in findings in the Maguire case.