Ocasio-Cortez responds to McCaskill over criticism of rhetoric

New York Congresswoman-elect Alexandria Ocasio-Cortez has fired back at Missouri Sen. Claire McCaskill who described her as a ‘thing’ and a ‘bright shiny new object’ while speaking in an interview with CNN last week.

Ocasio-Cortez, 29, who became the youngest woman ever elected to Congress in November, took to Twitter Saturday afternoon to express her disappointment over the remarks.

The socialist firebrand said: ‘Not sure why fmr Sen. McCaskill keeps going on TV to call me a “thing” and “shiny object,” but it’s pretty disappointing.

‘McCaskill promised she’d “100% back Trump up” on his anti-immigrant rhetoric & lost. In MO, almost all progressive ballot issues won.’

McCaskill took to the comments section Sunday morning and insisted she is rooting for her.

‘In the same interview I said I “wish you well and hope you hang the moon,’ McCaskill wrote.

‘My point was that results, not rhetoric is what really matters. Most folks are very cynical about all the promises, when they aren’t followed by real accomplishments. I look forward to cheering yours!’ 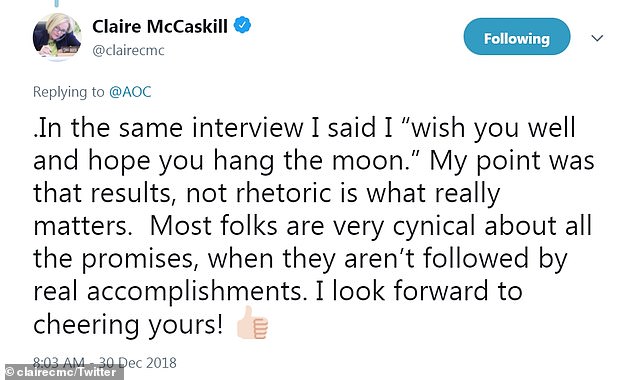 McCaskill took to the comments section Sunday morning and said: ‘In the same interview I said I “wish you well and hope you hang the moon”‘ 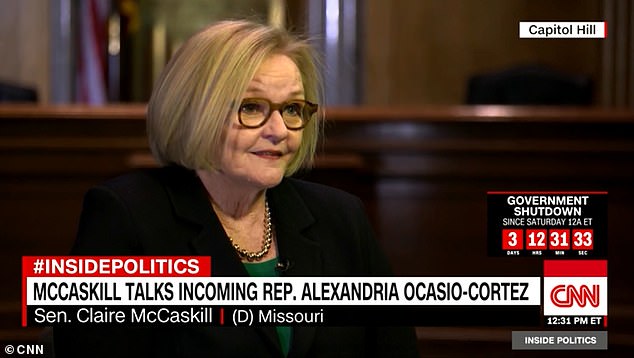 Last week, McCaskill told CNN she was baffled as to why incoming freshman congresswoman Ocasio-Cortez attracted so much attention since her surprise victory 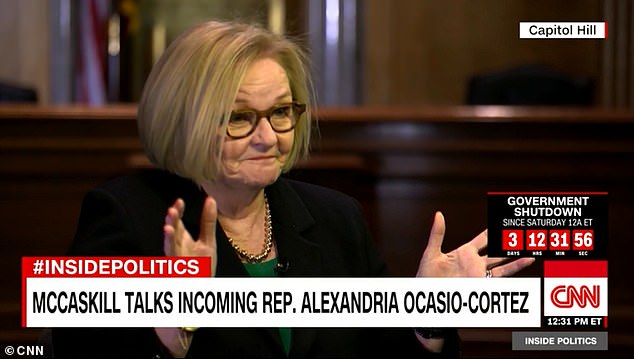 Last week, McCaskill said she was baffled as to why incoming freshman congresswoman Ocasio-Cortez attracted so much attention since her surprise victory in New York.

McCaskill, the outgoing senator from Missouri, said she doesn’t know Ocasio-Cortez, and cannot say whether the democratic socialist is one of the ‘crazy’ politicians within the Democratic Party that she spoke out against.

‘But it’s a good example of what I’m talking about, a bright shiny new object, came out of nowhere and surprised people when she beat a very experienced congressman.’

In the November general election, McCaskill lost her reelection bid to Republican challenger Josh Hawley. She has a week left in office. 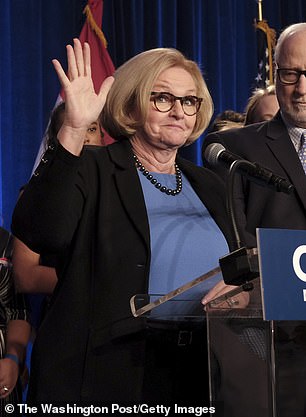 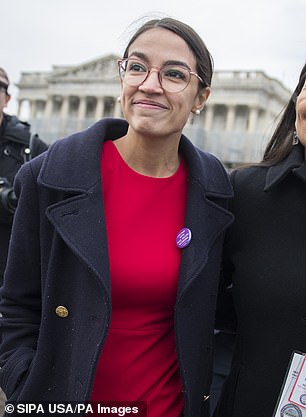 Senator Claire McCaskill is pictured left after losing the Senate race in St. Louis, MO on November 6, 2018. Alexandria Ocasio-Cortez is pictured right after the freshman class photo on the East Front of the Capitol on November 14, 2018

New members will be sworn in on Jan. 3, and Ocasio-Cortez will be part of a Democratic majority in the House of Representatives, having beat out exiting Rep. Joe Crowley over the summer in an intra-party challenge.

Her antics since Election Day, including her participation in a protest in likely House Speaker Nancy Pelosi’s office on Capitol Hill and an announcement this month that she was taking a week off for self-care before taking office, have been extensively covered by the media and have drawn strong reactions online.

McCaskill admitted in an exit interview with CNN that she doesn’t understand why the young politician is getting so much attention.

‘I’m not sure what she’s done yet to generate that kind of enthusiasm, but I wish her well. I hope she hangs the moon,’ McCaskill said of the incoming congresswoman.

She added: ‘But I hope she also realizes that the parts of the country that are rejecting the Democratic Party, like a whole lot of white working class voters, need to hear about how their work is going to be respected, and the dignity of their jobs, and how we can really stick to issues that we can actually accomplish something on.’

In a parting shot at some of her colleagues, McCaskill said, ‘The rhetoric is cheap. Getting results is a lot harder.’ 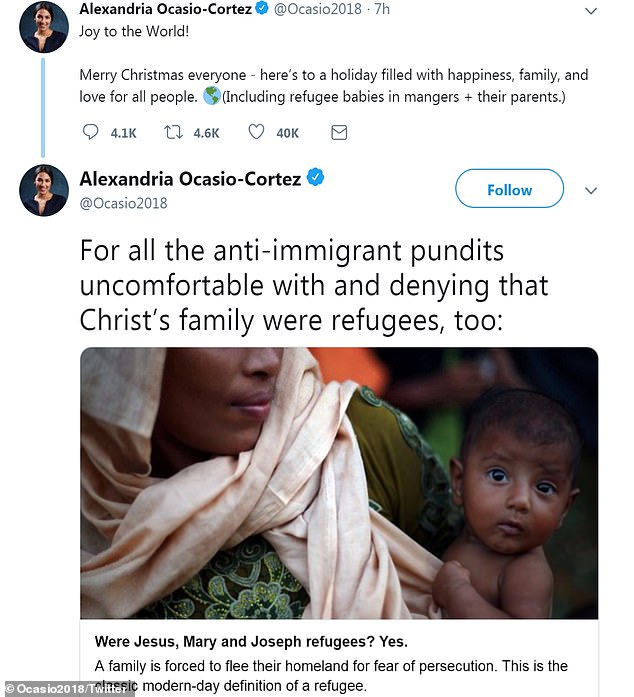 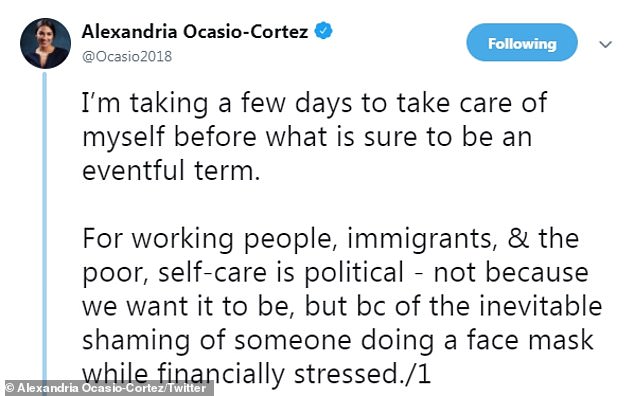 Ocasio-Cortez led the way this past week in saying that the rules should be changed in the future to stipulate that in the event of full or partial government closure, federal legislators do not get paid until it is over.

‘Next time we have a gov shutdown, Congressional salaries should be furloughed as well,’ she wrote on Twitter on Saturday.

‘It’s completely unacceptable that members of Congress can force a government shutdown on partisan lines & then have Congressional salaries exempt from that decision. Have some integrity.’

The statement garnered attention from the left and the right on the first day of the government shutdown.

Almost as quickly as she earned new respect from conservatives, she irritated Twitter users on Christmas Day, however, when she claimed that Jesus was born a refugee.

A tweet read: ‘Joy to the World! Merry Christmas everyone – here’s to a holiday filled with happiness, family, and love for all people. (Including refugee babies in mangers + their parents.)’

Many social media users pointed out that Joseph and Mary were not refugees when Jesus was born, and her telling of the first Christmas was therefore inaccurate.

The Gospel of Luke says that the family was in Bethlehem to participate in a census when Jesus was born. Mary gave birth in a manger, the Bible says, because there was no room left at the local inn.

Ocasio-Cortez insisted she was correct, however, sharing an article that supported her viewpoint.

She called those who disagreed with her ‘anti-immigrant pundits’ in a follow-up tweet that claimed they were ‘uncomfortable’ admitting that Jesus Christ was indeed a refugee.