Shocking security camera footage shows the moment an off-duty cop opens fire on two armed robbers on a bus in Mexico, before being fatally wounded when they return fire.

The incident occurred the evening of June 24, in Valle de Chalco Solidaridad, a municipality in the State of Mexico.

The bus’ surveillance camera shows one of the two robbers ordering demanding passengers on board give up their valuable belongings.

He then assaulted the driver and told him to continue to his route along a stretch of a highway that connects the state of Puebla and State of Mexico.

The off-duty police officer, whose name was not released by authorities, is seen sitting by the window next to a passenger on the third isle.

The cop can be seen reaching for his weapon and firing several times at the robber, who was standing near the driver, and then turned around and firing at the second suspect who stood in the rear of the bus.

A police officer (circled) in Mexico stopped a bus robbery in June and engaged two muggers in a shootout inside a packed bus before he was shot dead. The two assailants were beaten to death by the angry passengers after they tried to escape

The hero officer fired at least two more shots at the mugger in the front of the bus before one of the two assailants fired the fatal shot at him.

The muggers tried to escape from the bus, but were caught by the passengers outside and beaten to death, local media reported. 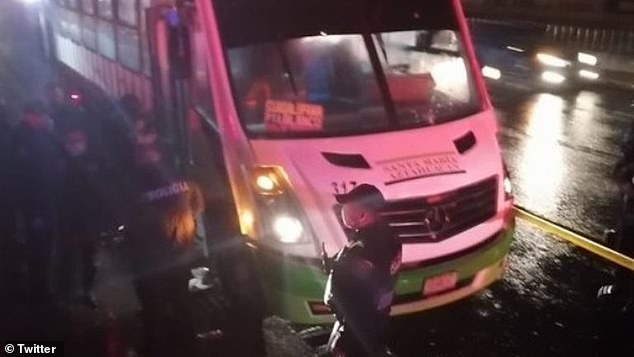 Footage of a cellphone video that was leaked on social media and aired by media outlet ADN 40 showed how one of the two wounded suspects was lying on the ground being kicked.

The footage of the shoot out was leaked online and went viral Friday, as the authorities, government officials and residents cope with a wave of robberies that have taken place in recent days on the public transit vehicles.

Another foiled robbery on July 31 was captured by a bus’ surveillance camera as it transited through Texcoco, a city in the State of Mexico.

At least six passengers came together and did not allow the mugger to flee from the bus after he stole a man’s phone.

The group beat him inside the bus and then tossed him out on to the street and continued to attack him before they ripped off his clothes.

In a separate incident Wednesday in the State of Mexico municipality of Ecatepec, two armed suspects robbed bus passengers before they were chased away and beaten. Witnesses said the men rushed themselves inside a police vehicle after they were arrested in order to avoid the angry mob.

According to recent crime figures released by State of Mexico, there were 496 assaults that took place on public buses in the June, a 2.7 percent increase from May.

Bus robberies in State of Mexico accounted for 63 percent of such crimes committed throughout the country during the month of June.