Off-duty policeman accidentally shoots his friend before killing himself

An off-duty police officer in Brazil allegedly shot his friend in the head by accident before instantly turning the gun on himself when he realised his mistake.

Flavio de Oliveira, 31, a fresh graduate from military police school, had apparently spent the afternoon drinking at a bar in Goiania, central west Brazil, with his friends.

It appears he planned to drive home after socialising and was inside his car last Thursday chatting to his mates, gathered around the hatchback, when a single shot rang out.

Matheus Castro, 20, (circled) sits astride his bike as the friends chat at de Oliveira’s window 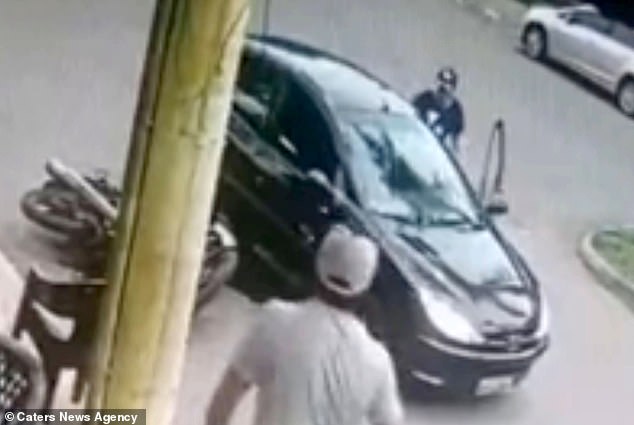 The bullet, which allegedly came from inside the stationery vehicle, hit Matheus Castro at point blank range.

The 20-year-old student was sitting astride his motorbike, dressed in a black t-shirt, close to the open window on the passenger side.

Everyone scattered as the victim’s bike toppled over and he fell to the ground, his body obscured by a pole.

He was rushed to hospital but died shortly afterwards from single wound. 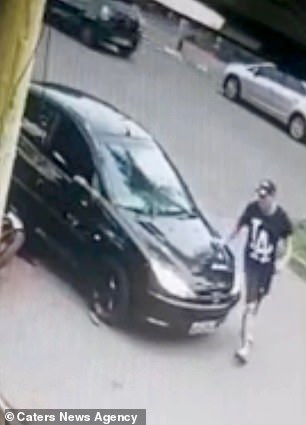 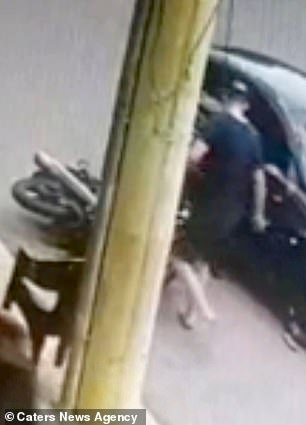 CCTV released by investigators shows de Oliveira getting out of his car and walking around to the opposite side where his friend lay dying on the tarmac.

Detectives claimed the desperate cop apparently took a moment to check what he had done then walked back to the driver’s side.

He leaned inside took out the weapon and without appearing to hesitate, shot himself in the temple.

His body immediately slumped forward coming to rest on the car door. He was declared dead at the scene.

Homicide detective Magda D’Avila said witnesses reported the officer had been drinking heavily with friends for several hours at an ice cream bar and this may have impaired his judgement when he handled the gun without ‘due care’.

Detective D’Avila said: ‘We believe he had his gun with him all the time and was about to drive home when he decided to pull out the weapon to show it off and it accidentally went off.

‘When he saw what he had apparently done, it seems he took the instant decision to take his own life.

‘He was a newly qualified military police officer and we are looking at whether his inexperience with handling a loaded weapon contributed to this incident.’

Forensic investigators are analysing security footage to see exactly what occurred and will assess whether the shot was accidental or if the weapon was faulty.