Hampshire Constabulary Police Officer James Street was sacked after he was accused of mishandling £2,000

A police officer has been sacked after he was accused of mishandling more than £2,000 from an evidence locker.

Police Constable James Street failed an ‘integrity test’ when he didn’t hand in cash from a holdall given to him by a ‘member of the public’ at a petrol station, a police hearing heard last Monday.

And the disgraced officer is also accused of calling a female colleague a ‘d**e’ and making other offensive remarks ‘about her and her appearance’ on WhatsApp.

The Hampshire Constabulary officer is accused of mishandling £2,106 in cash, but he will not be facing criminal prosecution for the alleged theft.

Street allegedly handled the cash that was in an evidence locker at Boomtown Fair music festival in August of 2016.

The lock-up was a temporary store set up to house cash, drugs and other items that were seized or handed in at the festival.

The hearing, held at Fareham Police Station, Hants, heard that Street was spotted on CCTV at 1.10am removing an ‘item’ from a safe in the locker and then putting it on a shelf.

Shortly after at 1.34am, Street re-entered the locker ‘carrying a brown envelope’ and went back to the safe. For 25 seconds he was out of view of the cameras and after two minutes he left.

Andrew Waters, counsel at the hearing, said: ‘That two-minute period must have been when he put the cash exhibit in the envelope.’

Street re-entered the locker with a colleague around an hour later and was said to have been seen looking ‘suspiciously’ at CCTV cameras.

Banking enquiries found £700 was deposited in the officer’s Lloyds account a day later, and then another £800 around a week later, according to police. 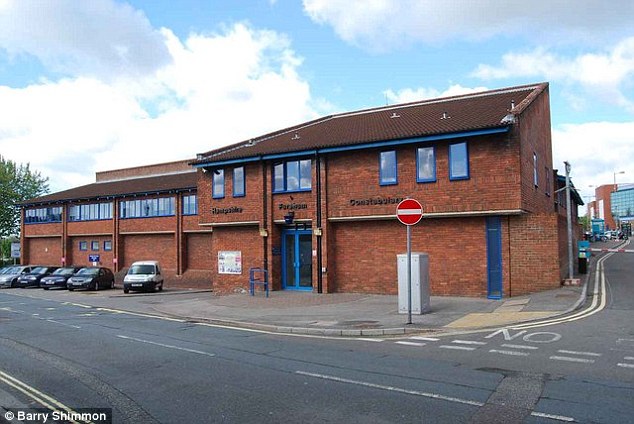 The hearing, held at Fareham Police Station, Hants (pictured), heard Street called a colleague a ‘d**e’ and made other offensive remarks ‘about her and her appearance’ on WhatsApp

Mr Waters told the hearing it was ‘no coincidence’ that computer records showed Street started looking into the investigation that was linked to the mishandled cash.

Street denied stealing the money as well as another similar allegation that relates to him failing an integrity test in July of 2017.

At a petrol station Street, based in Southampton, Hants, was handed a holdall containing ‘deal bags of white powder’ and cash, according to police.

He is accused of mishandling another £50 and €50, although he claimed he put it in an evidence bag in his stab vest to process later.

The panel was told he did correctly book the powder and the rest of the cash.

Street said he had ‘no intention’ of stealing the money, however Caroline Carberry QC, chair of the panel, found allegations of Street mishandling money proved gross misconduct on his part.

She also said the offensive WhatsApp message proved as misconduct as well.

About £53 of the mishandled money is not accounted for.