The police officer who was forced to shoot Bourke Street terrorist Hassan Khalif Shire Ali only graduated from the police academy three months ago.

The Somali-born 30-year-old stabbed three men, one fatally, during his Friday afternoon rampage through the heart of Melbourne.

Within minutes of Ali’s car bursting into flames on a footpath, two junior officers arrived on the scene and attempted to diffuse the situation.

They employed every aspect of their training to the highest standard, Police Commissioner Graham Ashton said.

The officers then retreated to the other side of the road as the bearded attacker with a shaved head and dressed in a long brown tunic, pursued them as horrified bystanders called on police to shoot him

‘The first thing the officers are trained to do is to look to create space, which is technically known as ‘corner and contain’ and have a conversation to try to verbally de-escalate. That was attempted but that didn’t prove to be possible,’ he said.

He said after methods of coercion are deemed useless, officers are required to pull out any defensive weapons they may use, including capsicum spray, batons, firearms and occasionally tasers.

When Ali frenziedly continued to lunge at the junior officers with a knife in hand, one of them pulled his gun and shot him directly in the chest – putting an end to the terror.

The officer who fired his gun had only been on the job for three weeks, according to The Age.

All police officers begin their careers with 31 weeks of intense training at the Victoria Police Academy. Training is considered both physical and academic.

‘They honestly handled it as well as they could…I couldn’t tell you how I’d react, those two blokes will never have a harder job in their career,’ another junior officer within the Victoria police force told Daily Mail Australia. 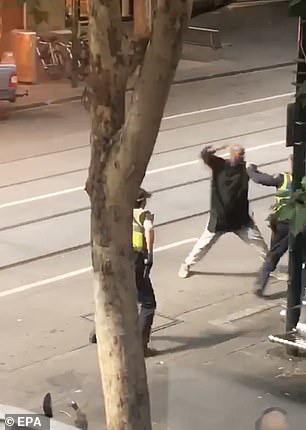 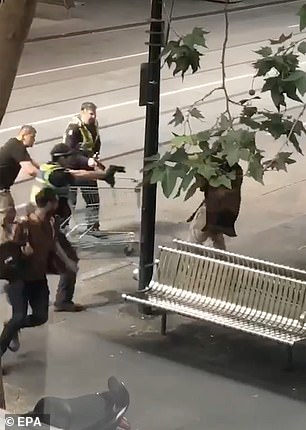 Video showed a man wielding a knife attempt to stab and slash at two police officers before he was shot and fell to the ground, and also a brave shopper try to hit him with a trolley (pictured) 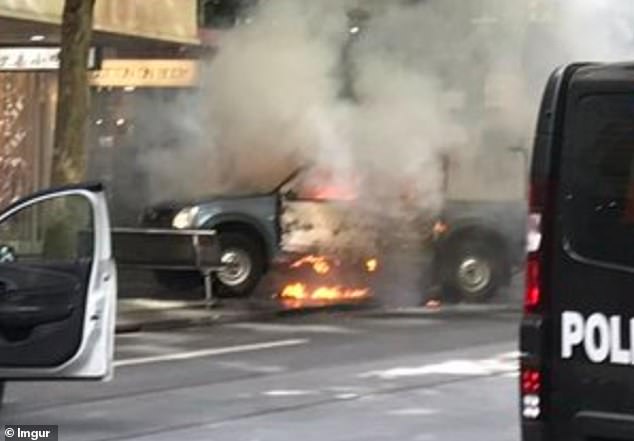 Commissioner Ashton said officers are trained to use their firearms when they feel lives are threatened, or if they’re at serious harm.

And if they are forced to pull their weapons, they have one target.

‘They’re certainly trained, if they’re going to be shooting, to shoot to kill,’ he said.

Both officers underwent mandatory drug testing and formal interviews after the attack, and are said to be in high spirits, if a little shaken.

The officers were commended by the likes of Prime Minister Scott Morrison, Bill Shorten and Daniel Andrews for their bravery after the horror attack, later claimed by ISIS. 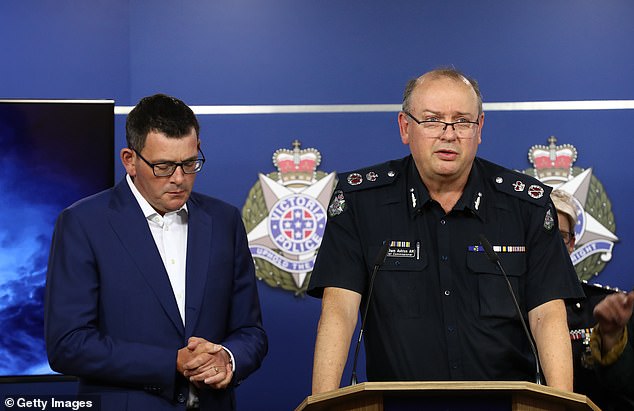 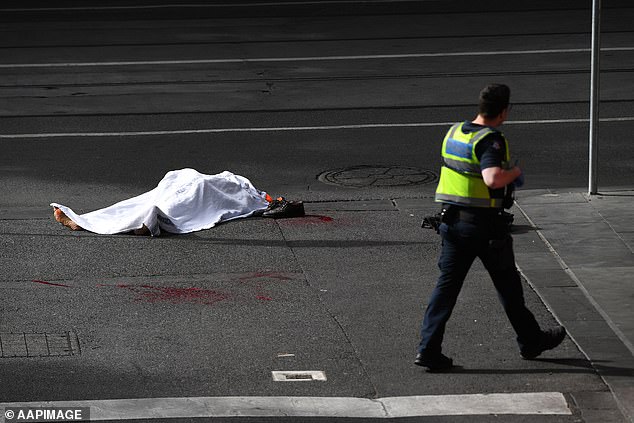 Prime Minister Scott Morrison released a statement condemning the actions of the assailant.

‘Australians will never be intimidated by these appalling attacks and we will continue to go about our lives and enjoy the freedoms that the terrorists detest,’ he wrote.

‘I praise the bravery of the police who were on the scene and took action and those who selflessly came to the assistance of the injured and provided comfort to the distressed.’

Opposition leader Bill Shorten also praised the bravery of ‘our extraordinary police officers who acted so swiftly and professionally in Melbourne’s CBD… and the passers-by whose first instinct was to go to the aid of others.’

Melbourne Lord Mayor Sally Capp praised emergency services for their efforts and the city for coming together to support each other.

‘Melburnians should be reassured by the rapid response from Victoria Police and emergency services who worked quickly, bravely and effectively to minimise harm to the public and contain the situation,’ she said.

‘I’m proud of the way our community responded respectfully to police instructions at the scene.

THE EVENTS OF THE BOURKE STREET TERROR ATTACK

4:20pm Friday November 9: A blue ute mounted a footpath on Bourke Street in Melbourne’s CBD. The car burst into flames.

– Cafe owner Sisto Malaspina, 74, saw the explosion and ran to the aid of the driver. The driver, now known as Hassan Khalif Shire Ali, exited the vehicle and stabbed Mr Malaspina to death.

– Ali then continued his rampage, attacking bystanders at random, including 58-year-old Rodney Patterson and a 24-year-old security guard. Footage shows the security guard was stabbed in the neck.

– The car fire was quickly put out by fire fighters and the bomb squad, who discovered gas cylinders in his car. The cylinders were declared useless shortly after.

– Two young officers were first on the scene, they engaged Ali. He lunged at them repeatedly with a knife.

– An unnamed hero joined the fray, affectionately nick-named ‘Trolley Man’ after he attempted to stop the knifeman by repeatedly attacking him with a trolley.

– An officer shot Ali in the chest, he dropped to the ground and was arrested.

– He was taken to hospital in a critical condition.

– Police were made aware of other victims of the knife attack. Three men were taken to hospital. Mr Malaspina, who died, and the two other men, who are both in stable conditions.

6pm Friday November 9: Superintendent David Clayton spoke with media and said they were not certain the attack was terror related, but would not rule it out.

8:30pm Friday November 9:  Victoria Police commissioner Graham Ashton spoke with media and confirmed the attack was terror related. He also confirmed Ali was known to state and federal police, as well as ASIO.

– His identity was revealed, and further affiliations to terror were revealed.