Los Angeles County Sheriff’s deputies were seen on horseback on Monday patrolling the site to ward off potential looters in the hills of Calabasas where a helicopter crash killed Kobe Bryant, his 13-year-old daughter, and seven others.

The mounted deputies and other emergency personnel were seen at the remote hillside as coroners worked to recover the remains of the crash victims on Monday.

Los Angeles County Sheriff Alex Villanueva warned on Monday that it will be ‘a misdemeanor for anyone to unlawfully access the crash site.’

Officials have so far removed three bodies from the site, which is difficult to access due to its unfriendly terrain.

Deputies needed off-road vehicles to navigate their way around the crash site, which lies on a hillside just off Las Virgenes Canyon Road. 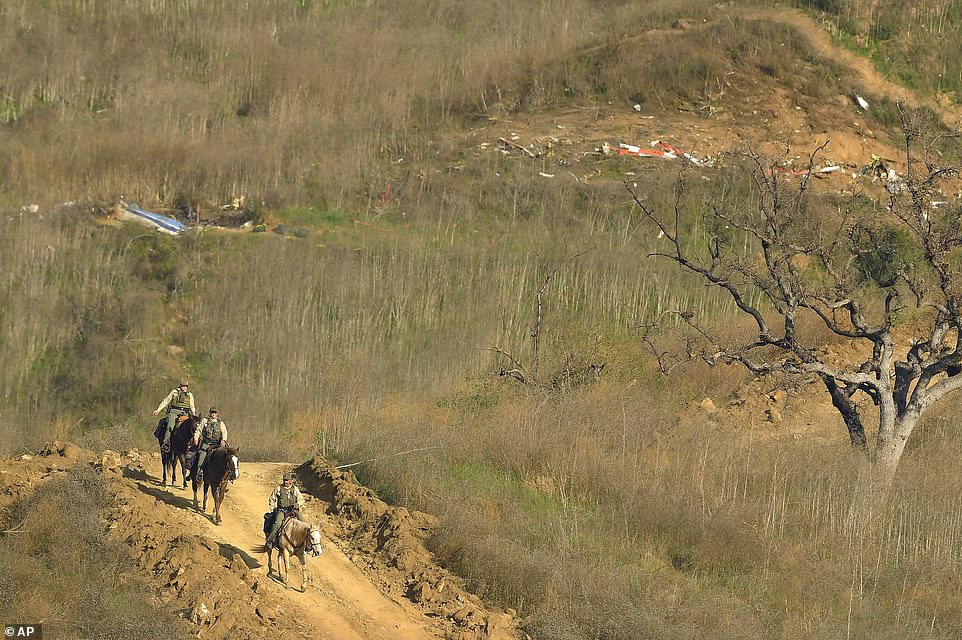 Sheriff’s deputies on horseback leave the scene of a helicopter crash, Monday that killed former NBA basketball player Kobe Bryant, his 13-year-old daughter, Gianna, and seven others in Calabasas on Sunday 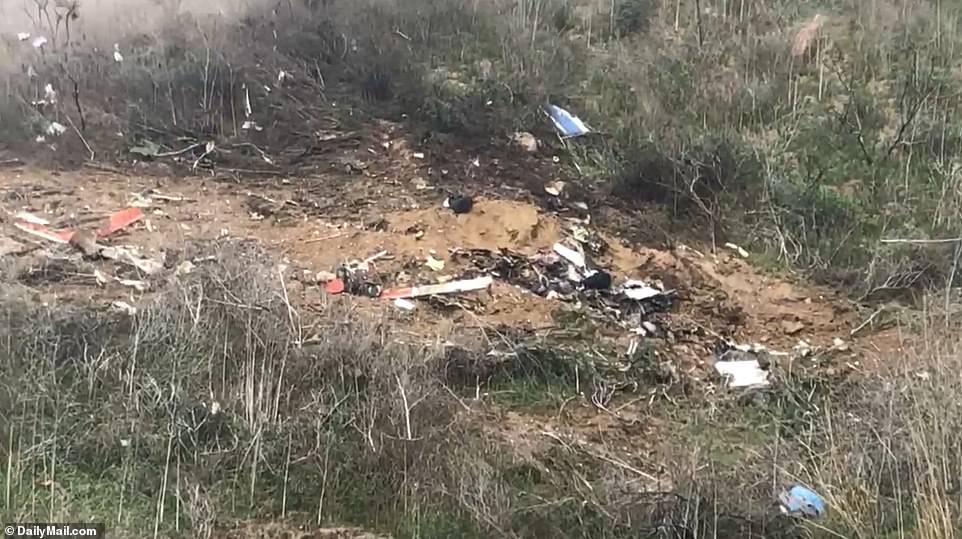 Radar indicated the helicopter reached a height of 2,300 feet before descending, and the wreckage was found at 1,085 feet 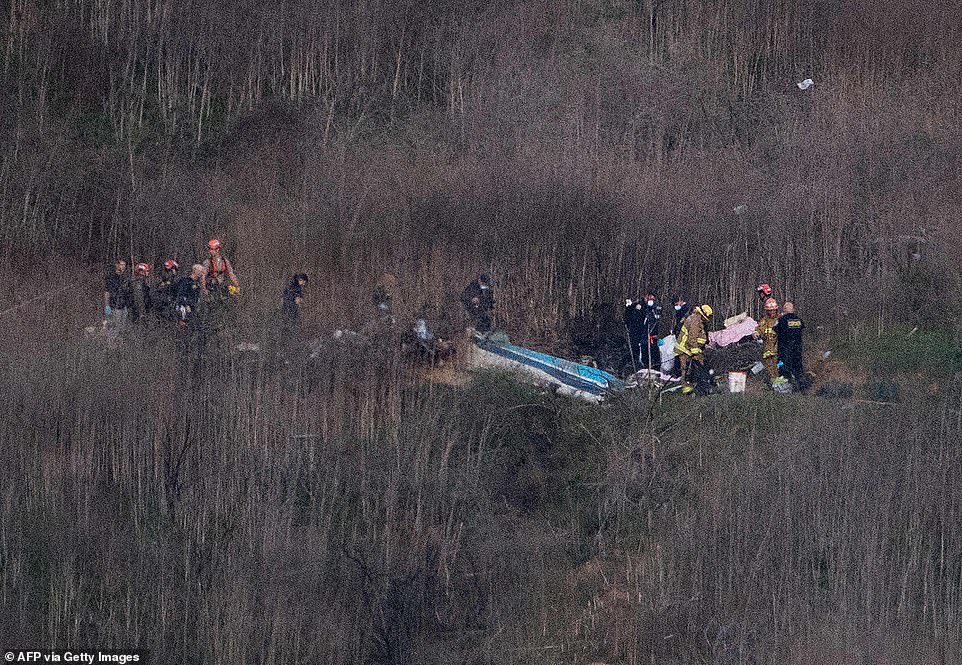 The difficulty that rescue services are experiencing in getting to the site will likely make the recovery process more difficult and time-consuming, according to the Los Angeles Times.

Personnel from the Los Angeles County Department of Medical Examiner-Coroner were seen carrying stretchers up the hillside where pieces of the Sikorsky S-76 were scattered across an area larger than the size of a football field.

Federal investigators from the National Transportation Safety Board were also at the scene gathering data that could shed light on what led to the crash.

Air traffic controller recordings showed on Monday that the pilot of the ill-fated helicopter was flying too low to be monitored in fog. 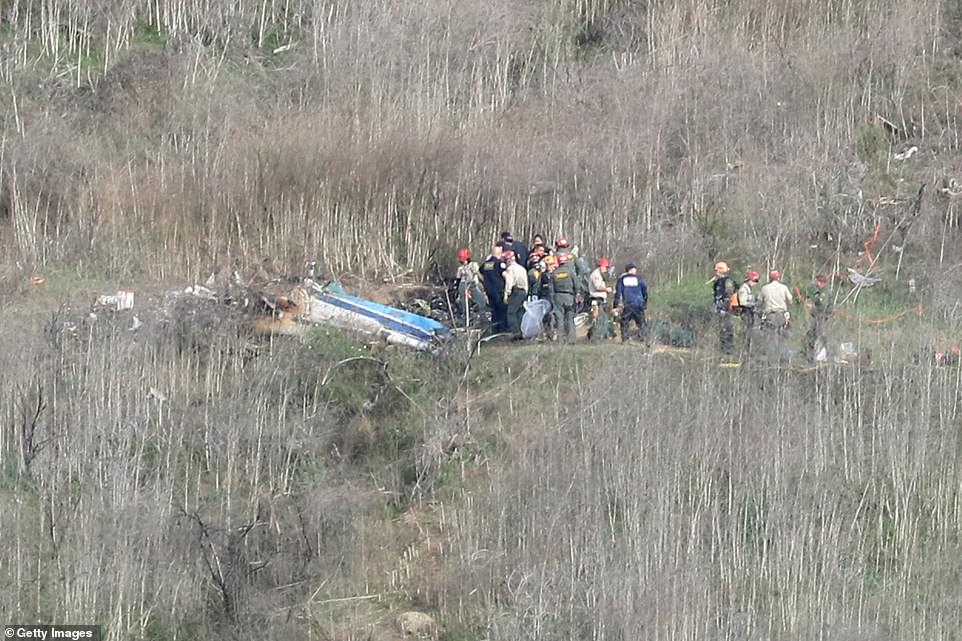 The image above shows emergency personnel working at the crash site that claimed the life of former NBA great Kobe Bryant, his 13-year-old daughter Gianna, and seven others 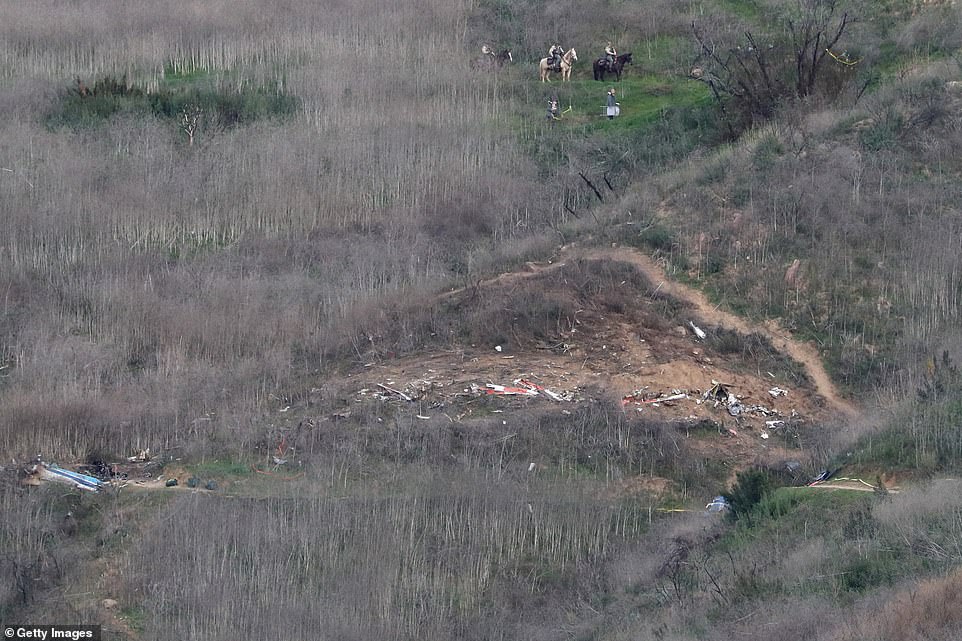 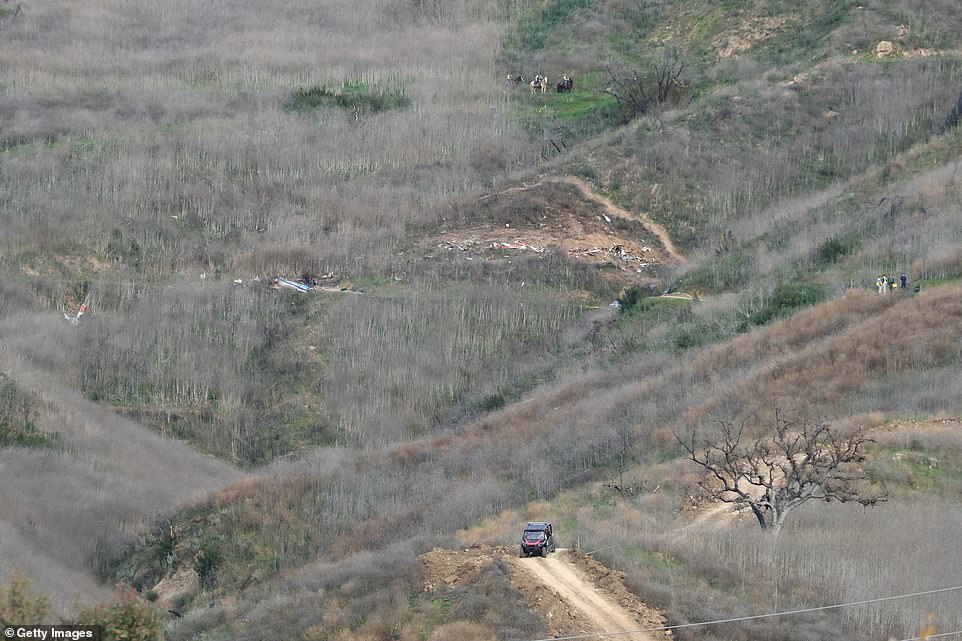 The remote hillside in Calabasas is difficult to access for authorities. The above image shows sheriff’s deputies on horseback as well as emergency crews driving all-terrain vehicles (ATVs) at the crash site on Monday 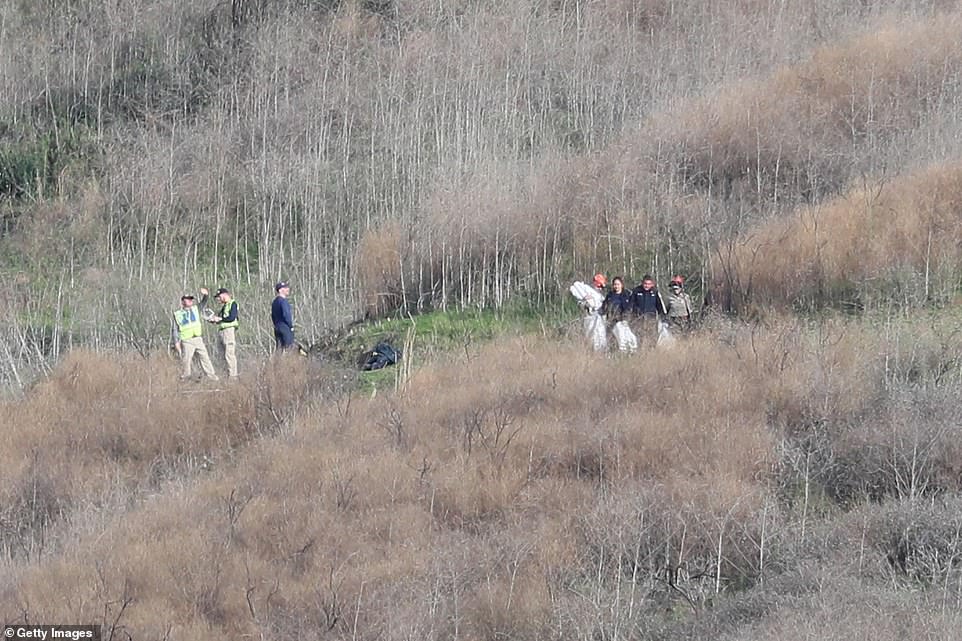 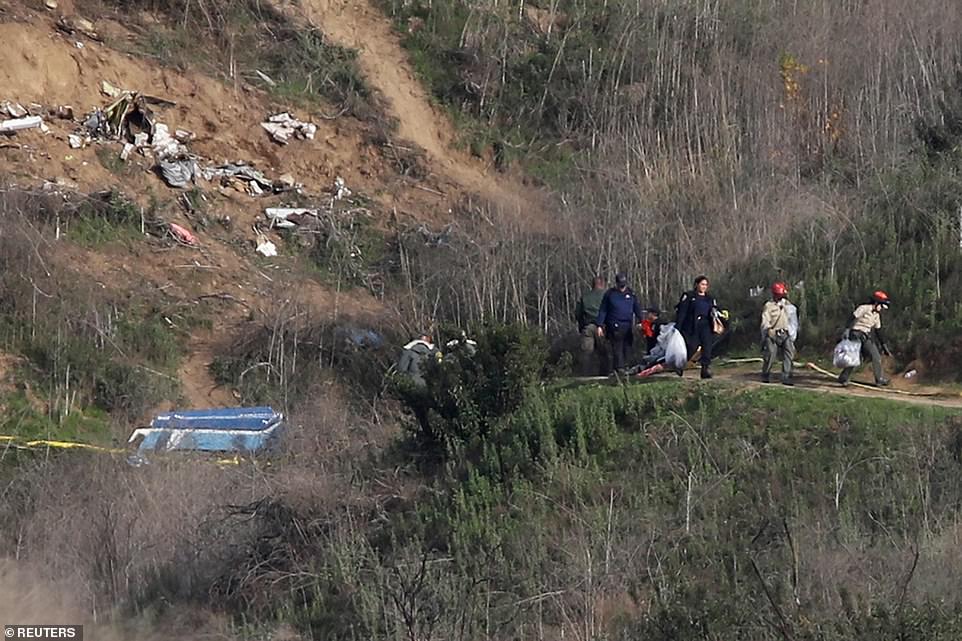 Officials carry bags of items away from the helicopter crash site in Calabasas, California, on Monday 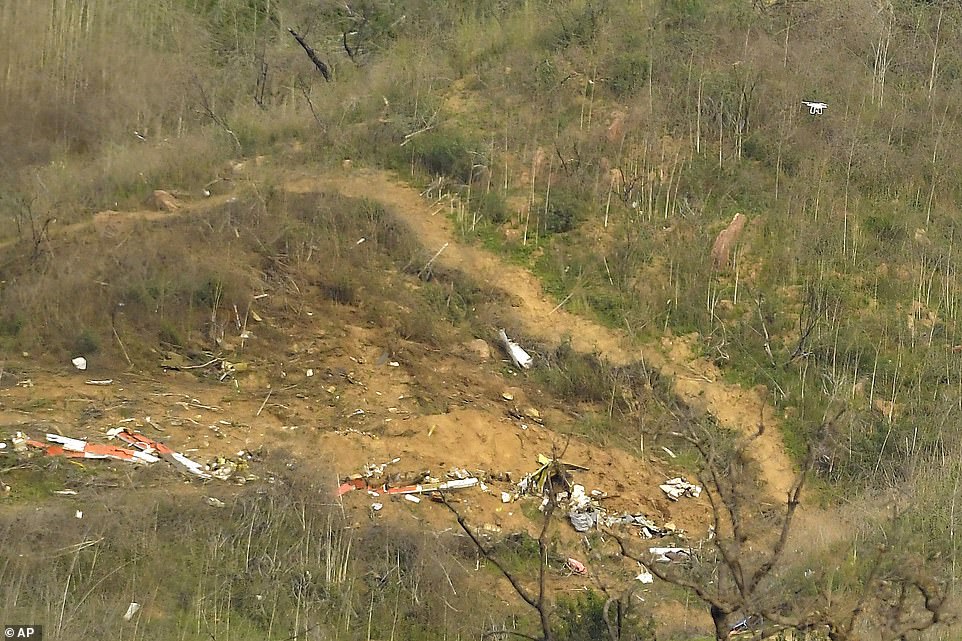 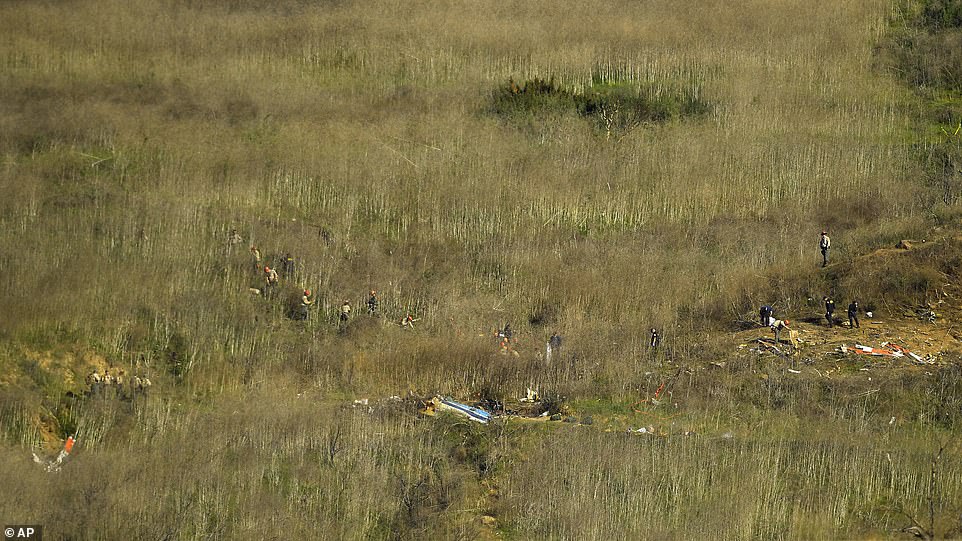 The NTSB is calling for the public to provide any photographs or video that might have been taken of the weather in the area of the helicopter wreck, which it said left a ‘devastating accident scene.’

The agency offered no update on the search for victims but said investigators were expected to be on the scene for up to five days.

‘There is an impact area on one of the hills and a piece of the tail is down the hill on the left side of the hill.

‘The fuselage is on the other side of that hill. Then the main rotor is about hundred yards beyond that.

Homendy also revealed there was no black box on board but instead an iPad which was used for flight itinerary.

She said investigators are looking at, ‘but not just focusing on’ weather as a possible cause of the crash.

Homendy added that while the FBI is also taking part in the investigation, there is ‘no criminal aspect of this investigation.’

The dense fog, and its role in the crash, came under scrutiny on Monday as fans, friends and relatives of the retired NBA great confronted the reality that the charismatic 41-year-old and his 13-year-old daughter, Gianna, were among those on board who died.

Bryant, who won five NBA championships in his 20 years with the Los Angeles Lakers, was known since his playing days to travel frequently by helicopter to avoid the Los Angeles area’s glacial traffic. 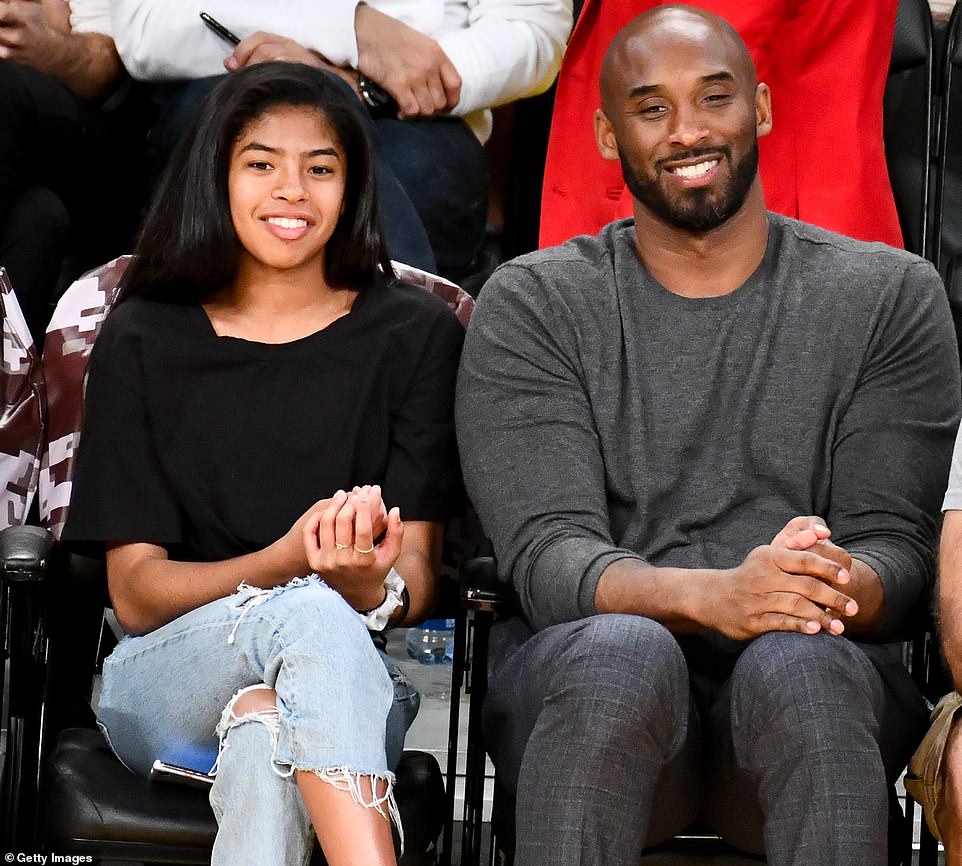 All nine people on board the aircraft, including the former NBA superstar and his 13-year-old daughter Gianna, pictured, died 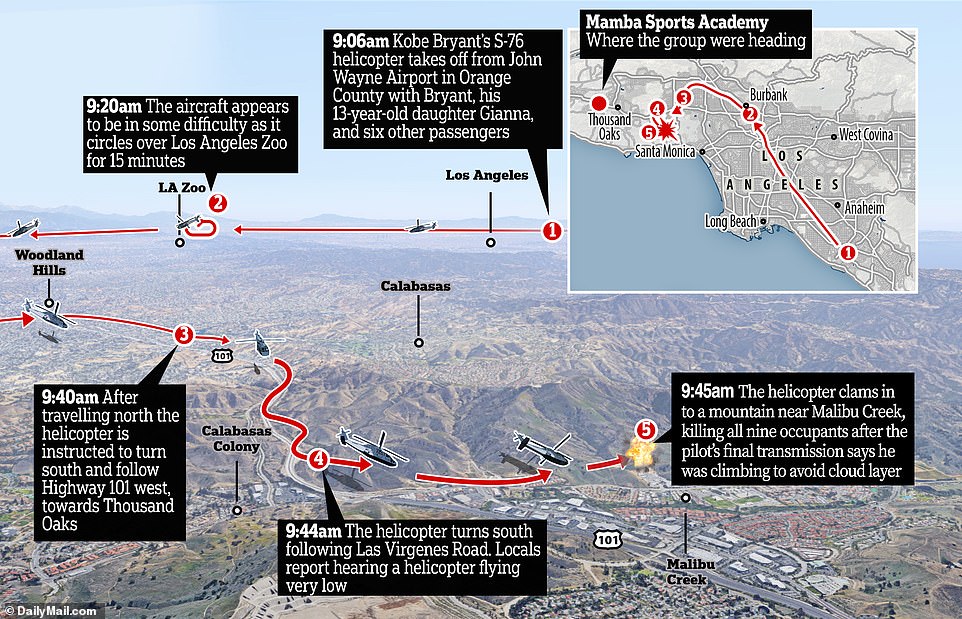 The National Basketball Association canceled a game scheduled for Staples Center on Tuesday between the Lakers and their crosstown rivals, the Clippers.

‘The decision was made out of respect for the Lakers organization, which is deeply grieving the tragic loss of Lakers legend Kobe Bryant, his daughter Gianna and seven other people in a helicopter crash on Sunday,’ the NBA said.

The ninth victim was the pilot, Ara Zobayan, an experienced former flight instructor who was instrument-rated, or qualified to fly in fog, according to multiple U.S. media accounts.

Zobayan, 50, was flying the aircraft when it reportedly plummeted nearly 500 feet in 15 seconds before crashing and killing Bryant, 41, his daughter, Gianna, 13, John Altobelli, 56, his wife, Keri, and their daughter Alyssa.

The crash also killed Payton Chester and her mom, Sarah, as well as Christina Mauser. 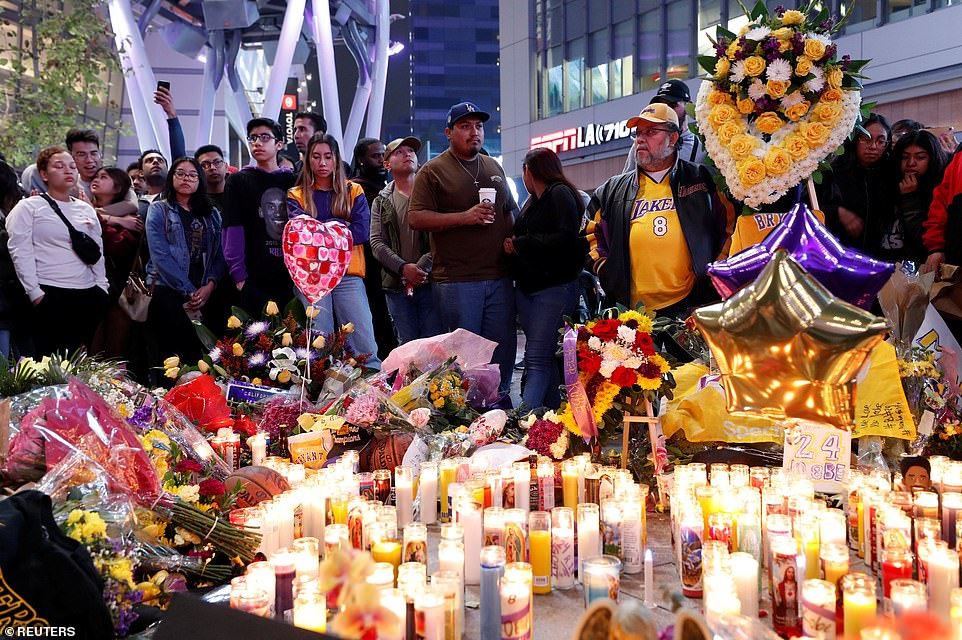 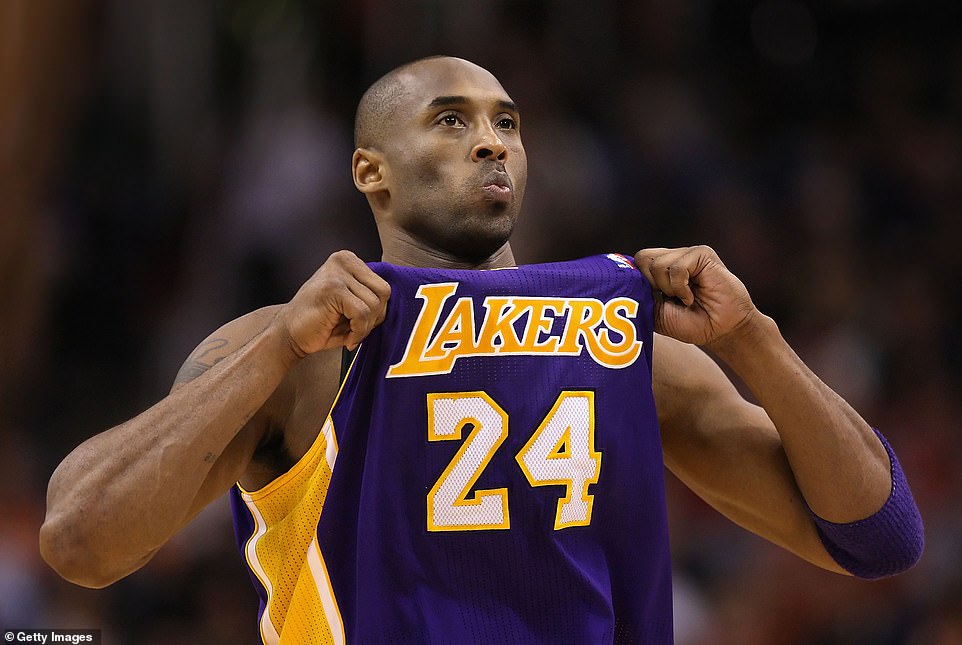 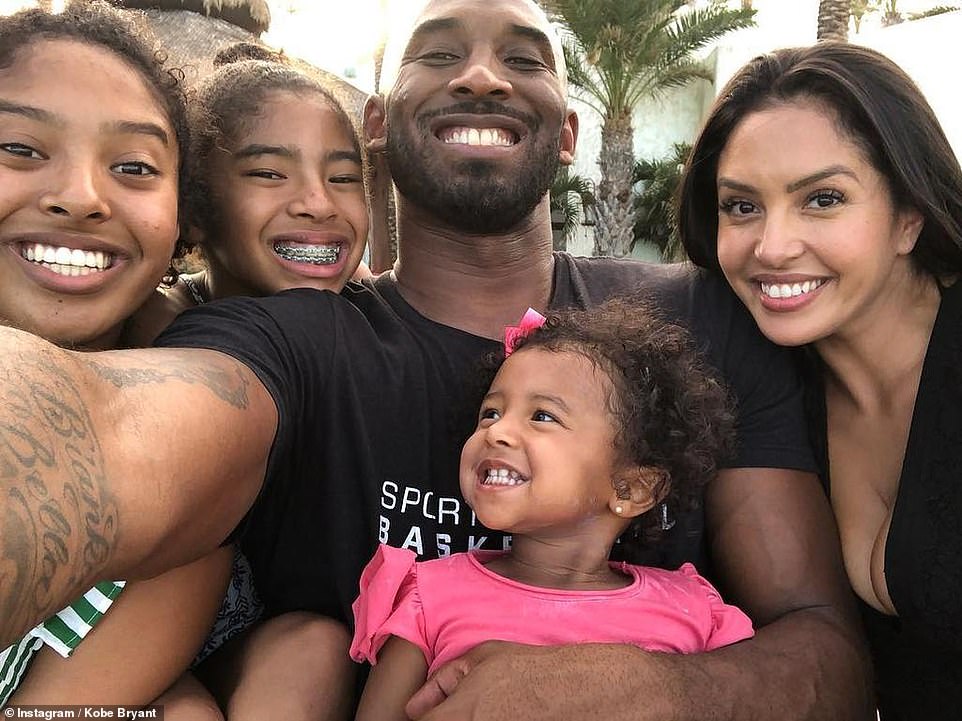 Zobayan was a licensed commercial helicopter pilot of 12 years, certified flight instructor of two years and a ground instructor of 11 years, according to federal aviation records.

Witnesses recounted thick fog over the foothills where the helicopter went down.

A Federal Aviation Administration (FAA) official noted a pilot ‘does not get a general, or blanket, clearance from the FAA to fly in these conditions.

‘A pilot is responsible for determining whether it is safe to fly in current and expected conditions.’

Moreover, Zobayan apparently requested ‘flight following,’ or constant tracking from controllers, but was informed he was flying too low to be picked up by air traffic control radar.

It is unclear if the pilot heard the comment as it came near the end of the doomed flight.

‘Two echo x-ray, you’re still too low level for flight following at this time,’ an air traffic controller told Zobayan, according to publicly available audio of the conversation that was posted by several aviation websites. 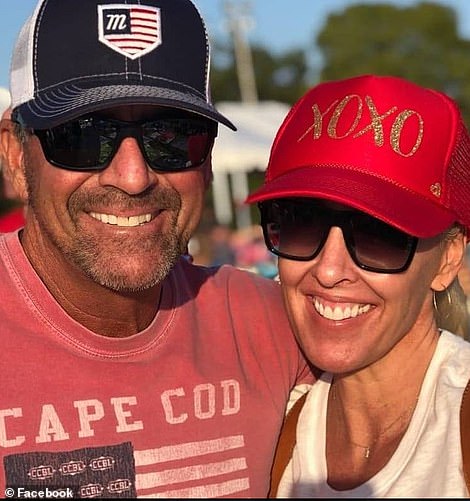 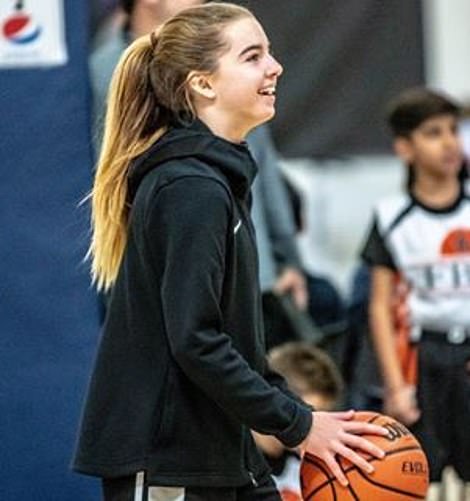 Among those killed in the crash were John Altobelli (left), 56, longtime head coach of Southern California’s Orange Coast College baseball team; his wife, Keri (left, with John); and daughter, Alyssa (right), who played on the same basketball team as Bryant’s daughter, said Altobelli’s brother, Tony, who is the sports information director at the school 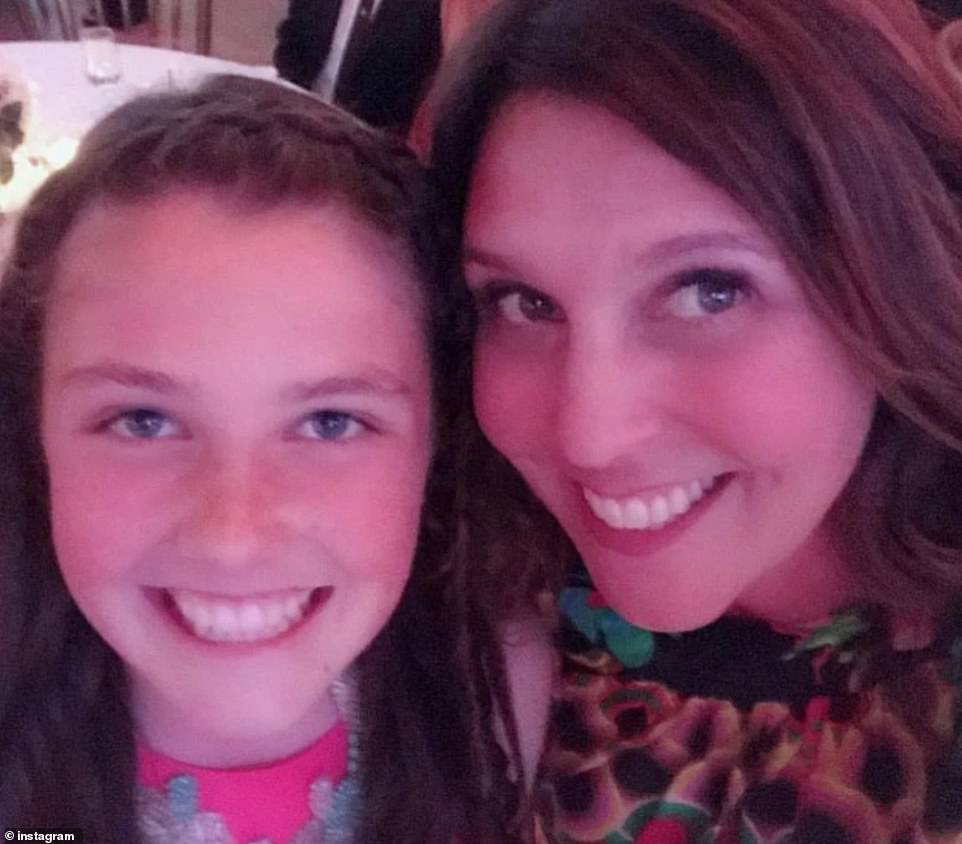 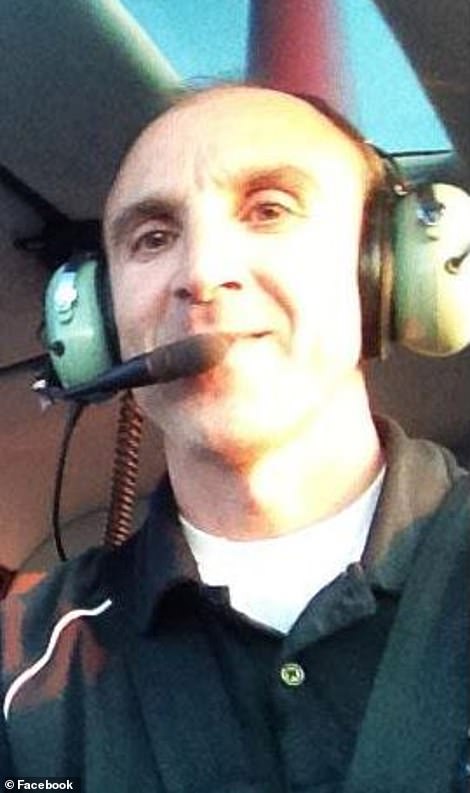 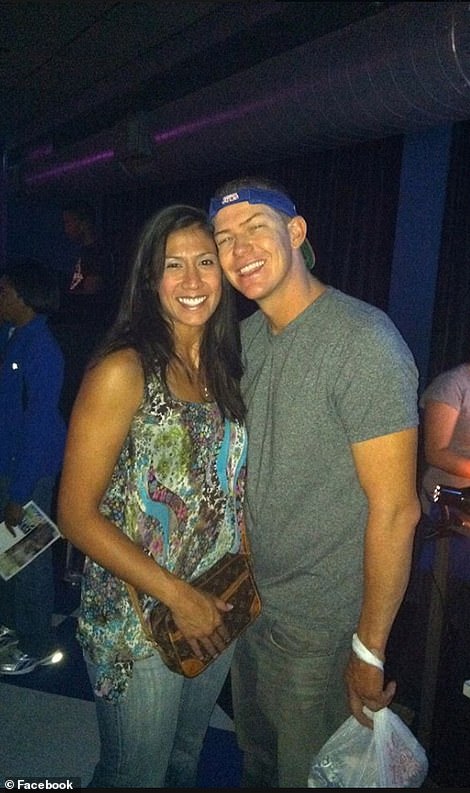 The pilot was identified as Ara Zobayan (left). He was killed in the crash alongside Christina Mauser (right, with her husband, Matt), a girls basketball coach at a nearby private elementary school

The radio traffic audio indicates Zobayan tried to remain below clouds in order to remain in visual contact with the ground and avoid flying on instruments, said Gary Robb, an aviation lawyer and author of the book Helicopter Crash Litigation.

Robb said it was ‘certainly possible’ that Zobayan was ‘flying so low to get under the cloud cover that he clipped the top of that mountain that extended into the clouds.’

‘The dialogue between the pilot and air traffic control leads me to believe … he kept wanting to go lower and lower, beneath the fog and ceiling, as we call it, and that could have led him to fly so low that he flew into the mountain,’ Robb said.

Zobayan, in his transmissions, ‘was calm and controlled the whole time,’ Robb said, calling the communications ‘extremely normal and routine.’

Investigators also would have to consider mechanical failure, Robb said, although he described the Sikorsky twin-engine turbo helicopter as a ‘reliable’ and ‘generally safe’ aircraft.

The mourning continued a day after Bryant’s death.

After Lakers fans spontaneously built a shrine to Bryant near the Staples Center where he played his home games, fans left flowers and Bryant jerseys at Lower Merion High School outside Philadelphia, where Bryant played before joining the NBA.

In Hollywood, movie celebrities including Robert De Niro and Brad Pitt took part in a moment of silence to honor Bryant at the start of the annual Academy Award nominees luncheon.

In New York, early morning commuters emerging from Penn Station stopped for a silent moment before an enormous electronic billboard lit up with Bryant’s image outside Madison Square Garden.