Britain’s official Covid cases fell by a fifth in a week today, Government dashboard data showed despite separate official statistics suggesting the outbreak in England is actually creeping up.

It was the eighth day in a row daily cases have fallen week-on-week, while average confirmed infections have been in freefall since the middle of January.

Daily Covid deaths also dropped by 48.3 per cent to 276, down from the 534 reported last Wednesday. The number of people dying with the virus has fluctuated over the last few weeks.

Experts today told MailOnline the daily publication of Covid deaths should be scrapped because they may be overestimating the true number of people dying from the virus.

And hospitalisations also fell, dropping 15.7 per cent to 1,196 on February 5, the latest date UK-wide data is available for.

Boris Johnson declared that all coronavirus restrictions are set to be axed from the end of this month if the positive trends continue. But separate official data released today suggested one in 19 people in England were infected with Covid on any given day last week.

Office for National Statistics (ONS) statisticians estimate 2.8million people in the country had the virus daily in the week up to February 5, up 7.3 per cent on the 2.6million estimated the week before.

But they admitted the trend during the week was ‘uncertain’, with official Government data suggesting cases have been dropping rapidly for the last week in England.

Infections were still being driven by children, with the highest rates in unvaccinated primary school students with one in nine aged two to 11 thought to be infected on any given day. Rates were still lowest in the most vulnerable over-70 age group (one in 40), followed by people aged 50 to 69 (one in 35). 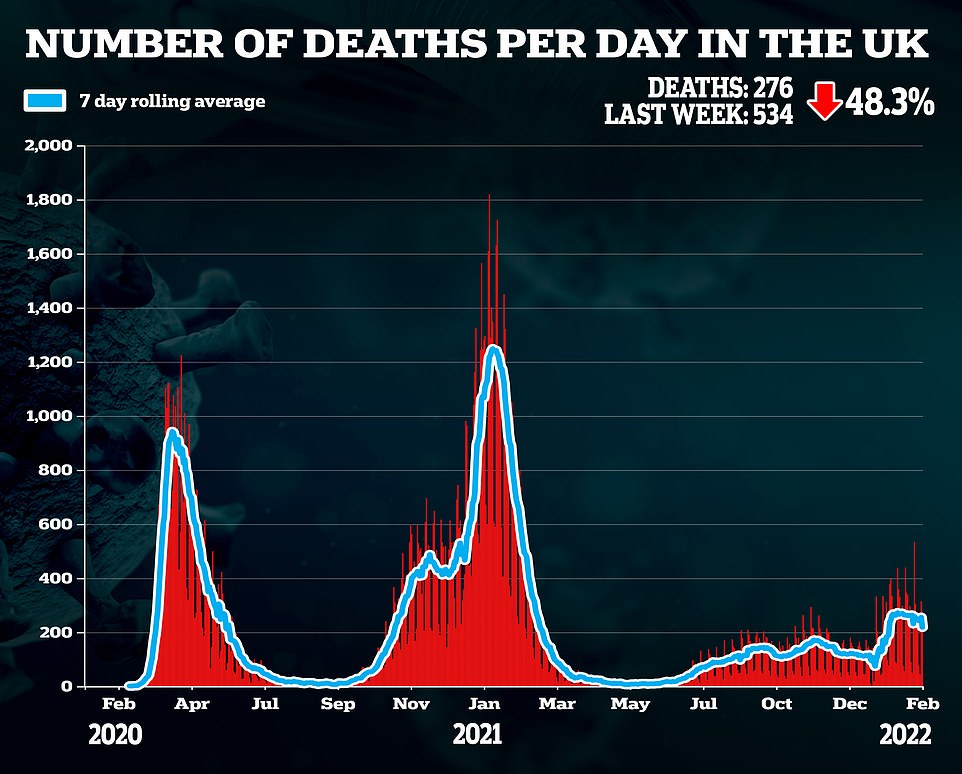 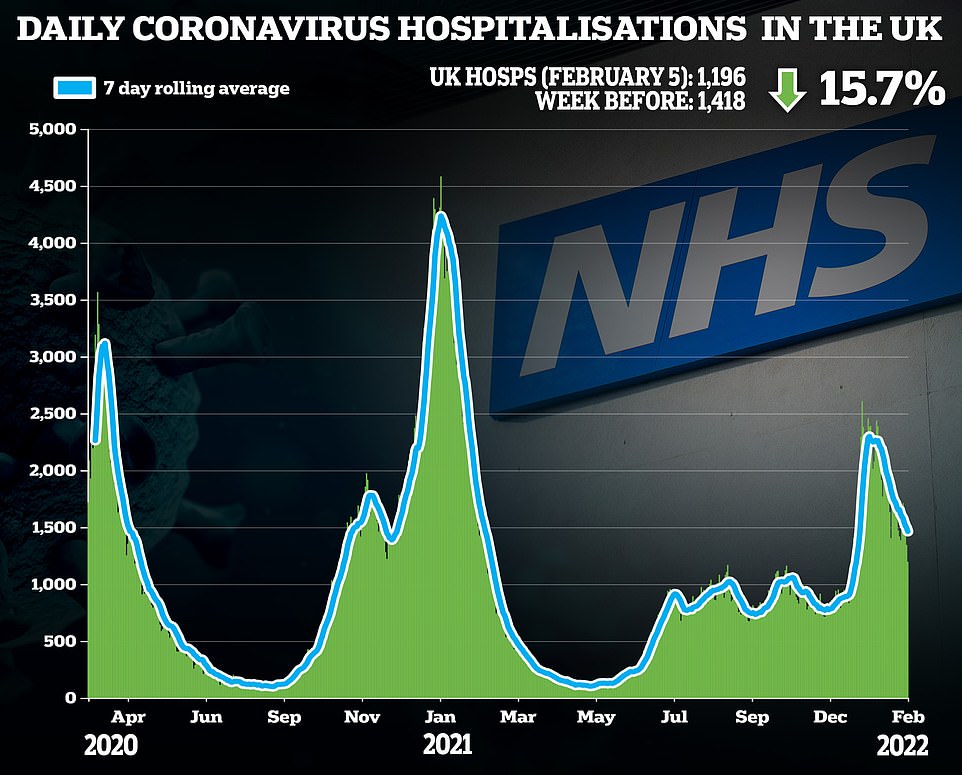 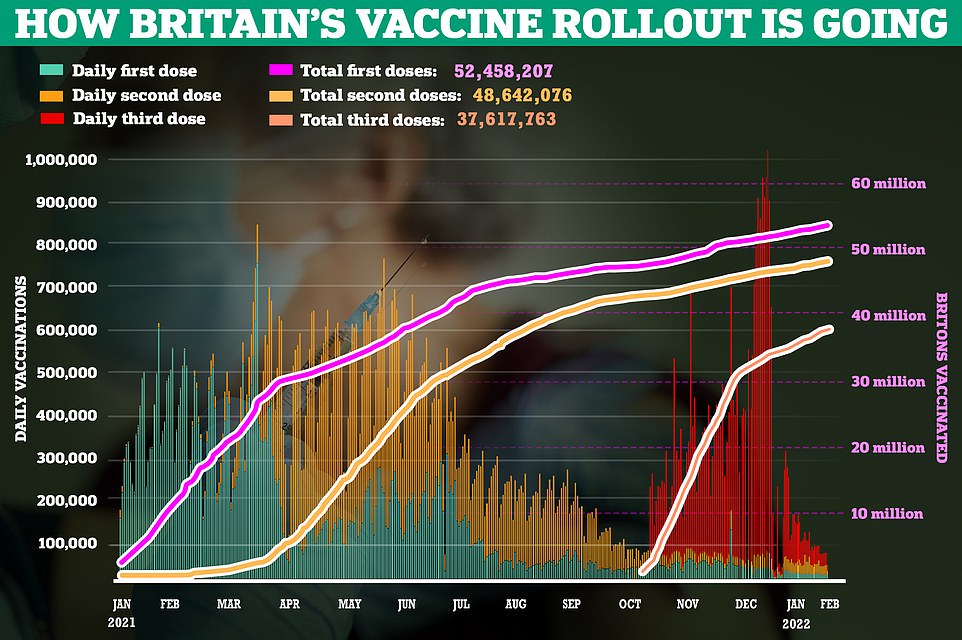 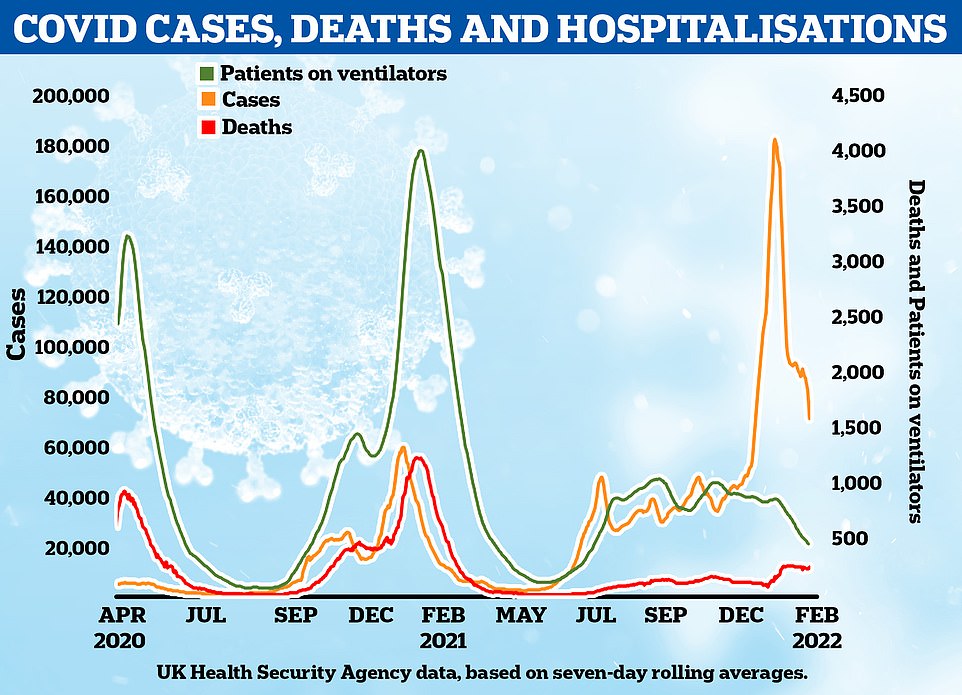 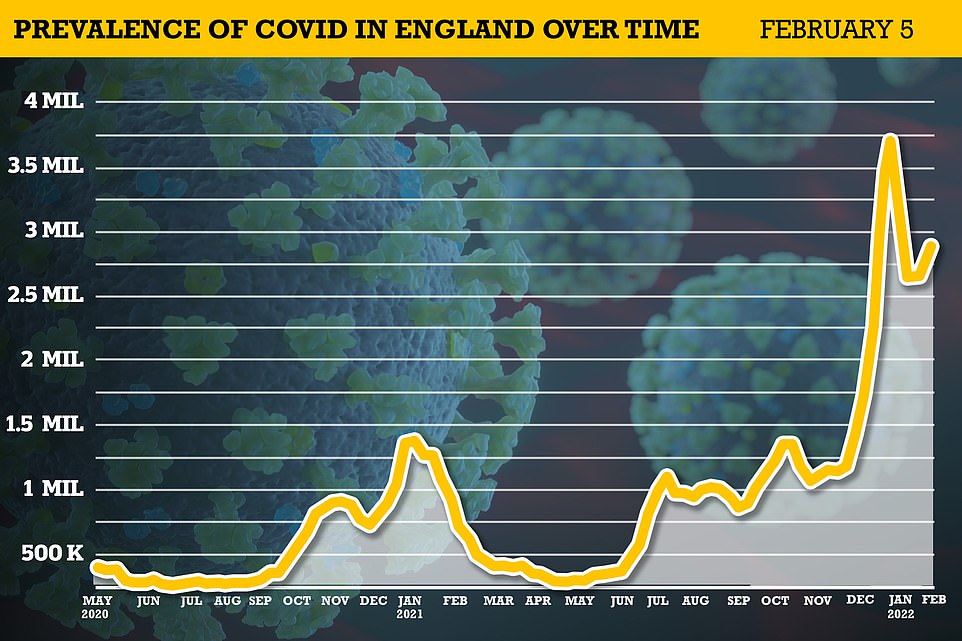 Office for National Statistics (ONS) figures suggest 2.8million people in England had the virus daily in the week up to February 5, up 7.3 per cent on the 2.6million estimated the week before

Boris Johnson today declared that all coronavirus restrictions are set to be axed from the end of this month.

The PM made the dramatic announcement on ending the rules – including the legal requirement for those who test positive to self-isolate – at the start of PMQs in the Commons.

Mr Johnson said he would lay out the full strategy after the half-term recess on February 21, but as long as ‘encouraging’ trends continue restrictions can go in England four weeks earlier than the current expiry date of March 24.

The step was greeted with roars in the chamber, with many Tories having been pushing for the government to draw a line under the pandemic.

Covid cases have been easing after the Omicron surge and deaths have remained far below the fears of many experts.

The Plan B requirements for people to work from home where possible was dropped last month, along with most face mask rules and compulsory Covid passes.

The country has been subject to virtually unprecedented peacetime restrictions since early 2020.

Downing Street stressed that people with infectious diseases should not go to workplaces.

The dashboard data also showed 31,720 more boosters were dished out yesterday, taking the total number of people fully protected against the virus to 67.6million in Britain.

Meanwhile, the ONS estimates also claimed that Wales has seen its infections fall in the most recent week, dropping 13 per cent to 121,200 people carrying the virus on any given day.

The gold-standard ONS data uses around 100,000 random swabs to estimate the total number of people infected with the virus. For comparison, the daily figures are based on testing which can fluctuate heavily.

In England, Covid was most prevalent in the South East, where one in 17 people were thought to have the virus during the week.

Rates were lowest in the North East, North West, Yorkshire and the Humber, East Midlands and South West, all of which saw one in 20 infected on any given day.

Secondary school students in England had the next highest infection rates after primary school children, with one in 11 pupils in year seven to 11 thought to have the virus on any given day. 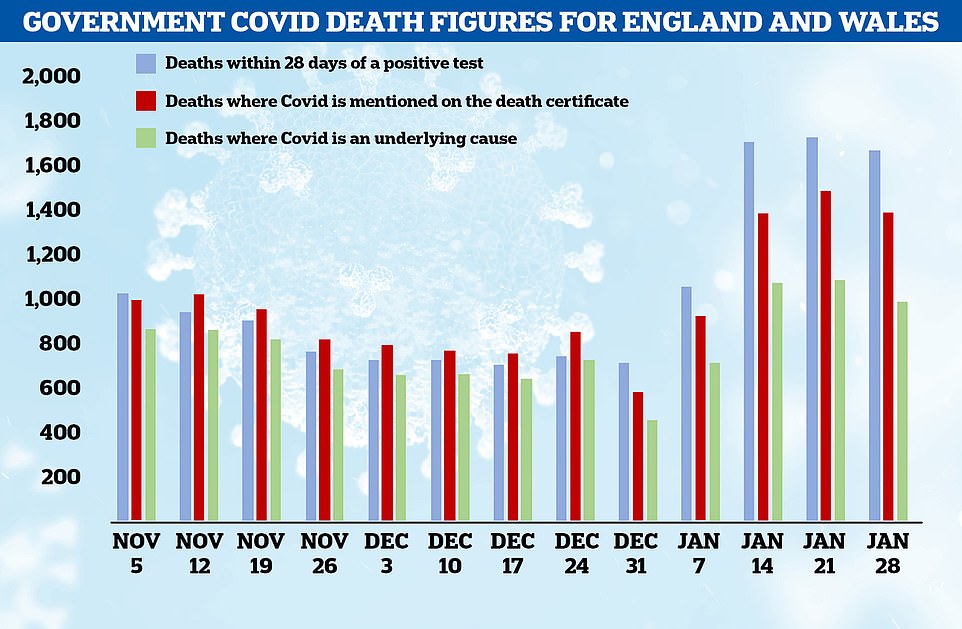 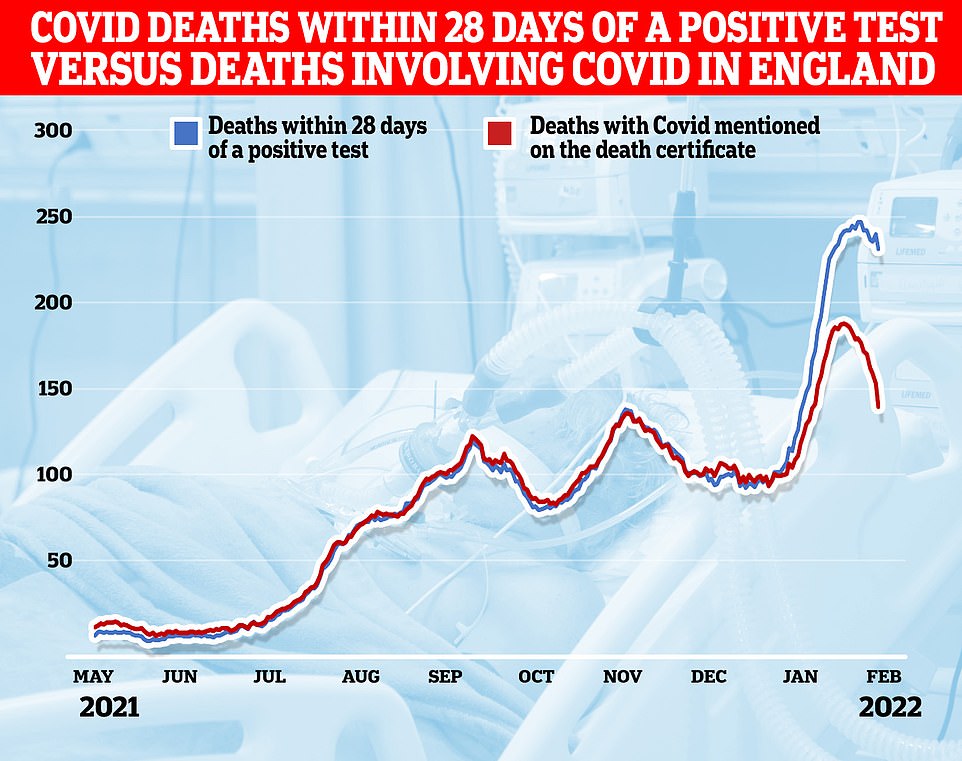 Covid deaths within 28 days of a positive test (blue) and by mentions on death certificates (red) initially tracked each other closely in England. But in recent weeks the two have now diverged significantly. The data is by date of occurrence 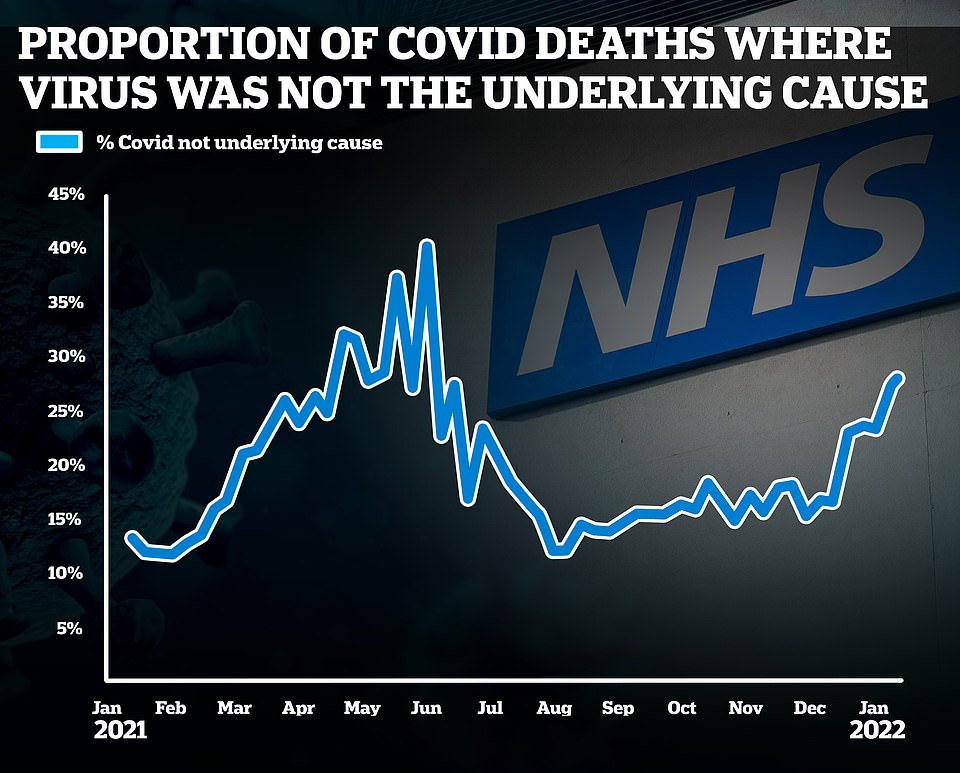 The graph shows that proportion of Covid fatalities in England where the virus was not the underlying cause of death. Data from the Office for National Statistics shows this figure rose to 28.8 per cent on January 28 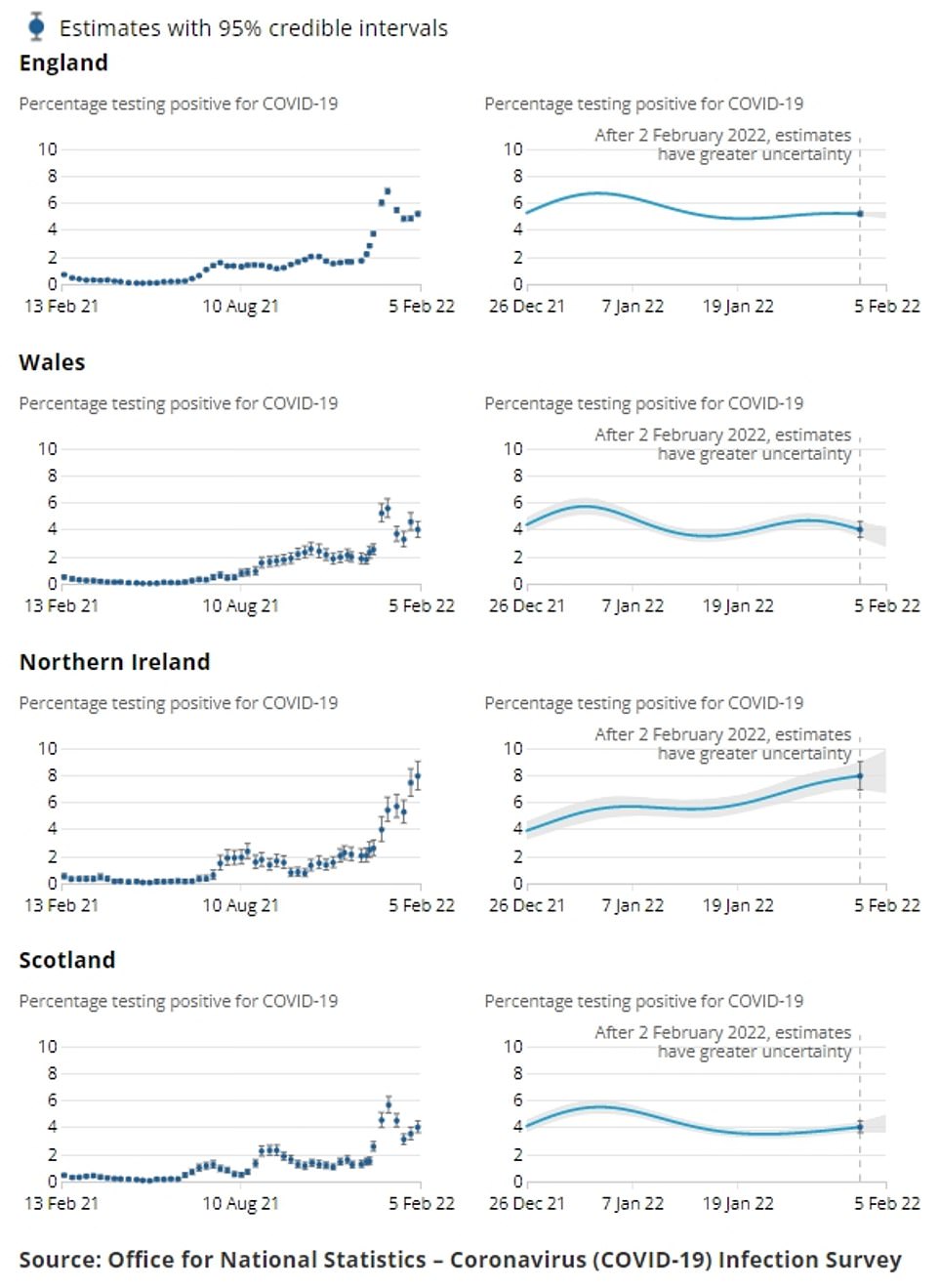 Experts today called for the scrapping of the daily publication of Covid deaths to be brought forward because they are out of whack with the true number of people dying from the virus.

Since March 2020, the Government has released a daily fatality toll based on deaths within 28 days of a positive test to track the pandemic.

Critics have long complained it is a flawed dataset because it includes everyone who died in the weeks after they caught Covid, regardless of their cause of death — meaning theoretically even car crash victims can be included.

Professor Robert Dingwall, a former Government Covid adviser, said the value of the daily deaths had always been ‘speed rather than accuracy’ but he argued their need was ‘diminishing rapidly’ because Omicron is causing a rise in coincidental Covid deaths.

Going by the daily figure reported by the Government, there were 1,663 Covid fatalities registered in England and Wales during the week ending January 28, with more than 400 on some individual days.

But separate official data from the Office for National Statistics shows Covid was actually the underlying cause in just 986 deaths in the same week — 40 per cent lower than the daily reported figure.

The ONS found that overall there were 1,385 fatalities in which Covid was mentioned on the death certificate, even if it wasn’t the reason for their death, which is still lower than the official toll presented to the public daily.

Sarah Crofts, head of analytical outputs for the Covid-19 Infection Survey, said: ‘While we see changes in trends week to week, infections have continued to be high across the UK since the Omicron variant became dominant in December.

‘In the latest week, Northern Ireland has experienced a notable increase in infections to the highest level we have seen for any UK country so far.

‘Meanwhile, the most recent trend is uncertain in England where high levels of infection are driven by primary school aged children.

‘There has also been a recent increase in Scotland while Wales has seen a fall in infections.’

It comes as the Prime Minister announced all Covid rules — including the legal requirement to self-isolate — would be ditched a month earlier than planned.

Mr Johnson said he would lay out the full strategy after the half-term recess on February 21, but as long as ‘encouraging’ trends continue restrictions can go in England four weeks earlier than the current expiry date of March 24.

The Plan B requirements for people to work from home where possible was dropped last month, along with most face mask rules and compulsory Covid passes.

The country has been subject to virtually unprecedented peacetime restrictions since early 2020. Downing Street stressed that people with infectious diseases should not go to workplaces.

But the next logical step for Government could be axing free Covid testing — which has been costing billions of pounds.

It is far from clear that Scotland and Wales will follow Mr Johnson’s lead – as the SNP’s Nicola Sturgeon and Labour’s Mark Drakeford have been far more cautious. Travel rules could also stay in place on people coming to the UK.

The news could give Mr Johnson a much-needed boost as he battles to cling on amid damaging Partygate allegations.

‘Mr Speaker I can tell the house today, that it is my intention to return on the first day after the half term recess to present our strategy for living with Covid,’ Mr Johnson told MPs.

‘Provided the current encouraging trends in the data continue, it is my expectation that we will be able to end the last domestic restrictions, including the legal requirement to self isolate if you test positive, a full month early.’