Indonesia is on fresh alert today amid warnings another tsunami could strike as the death toll from a huge wave sparked by the ‘Child of Krakatoa’ volcano climbed to 281.

Officials have warned people living near Anak Krakatau to stay away from beaches because of constant eruptions at the mountain.

Indonesia’s meteorological agency confirmed the underwater collapse of part of the volcano had caused a deadly wave 10ft high that hit popular beaches of southern Sumatra and the western tip of Java late on Saturday.

‘Recommendations from [the] Meteorology, Climatology and Geophysical Agency are that people should not carry out activities on the beach and stay away from the coast for a while,’ said Sutopo Purwo Nugroh, from the country’s National Disaster Management Agency.

He warned that the death toll from Saturday’s disaster ‘will continue to rise’ as rescuers, using heavy machinery and their bare hands, search through debris in the wake of the tsunami.

At least 1,000 people were injured and nearly 12,000 coastal residents forcibly evacuated to higher ground, with a high-tide warning extended to Wednesday.

Indonesia is on fresh alert today amid warnings another tsunami could strike days after a huge wave crashed into the coast killing at least 281. Pictured: Rescuers carry a body away from a tsunami-ravaged building in Pandeglang, Banten province 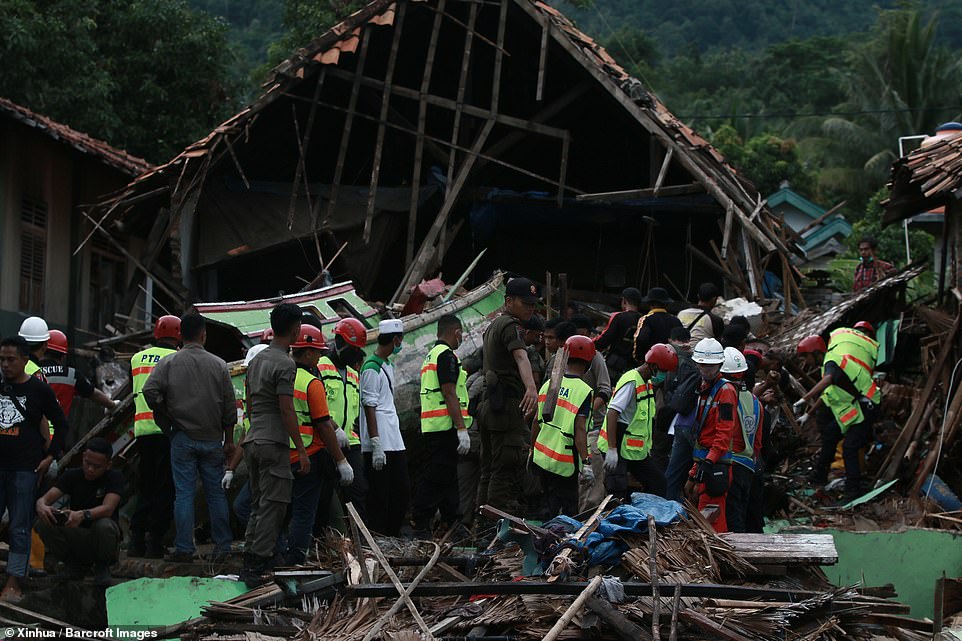 Officials have warned people living near Anak Krakatau to stay away from beaches amid fears constant eruptions at the volcano – between Java and Sumatra – could trigger further tsunamis. Pictured: Scenes of devastation in Rajabasa Village in Indonesia’s South Lampung 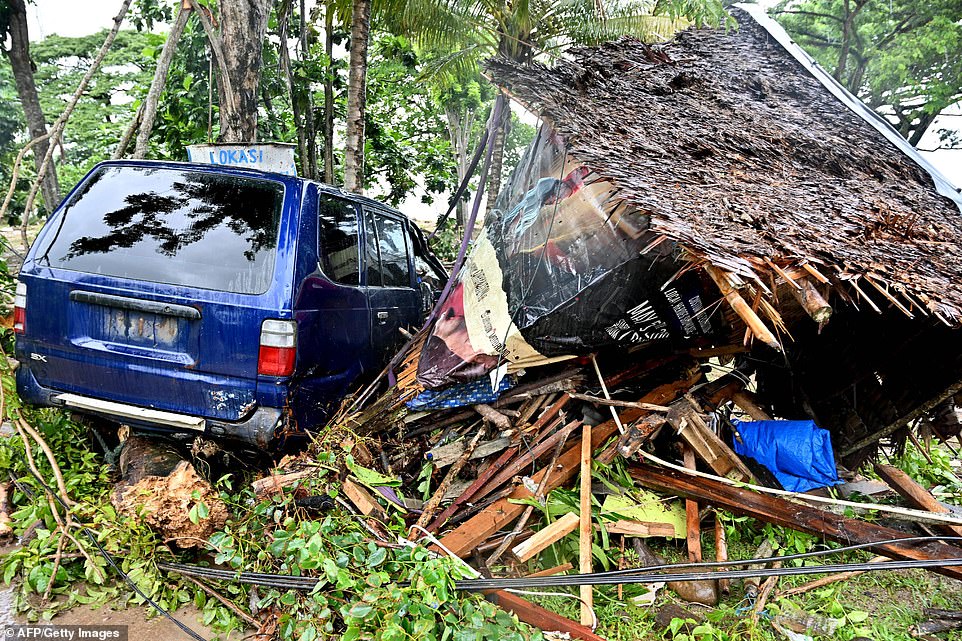 A damaged car and destroyed hut are pictured at the village of Sukarame in Carita, Banten province in the wake of the tsunami 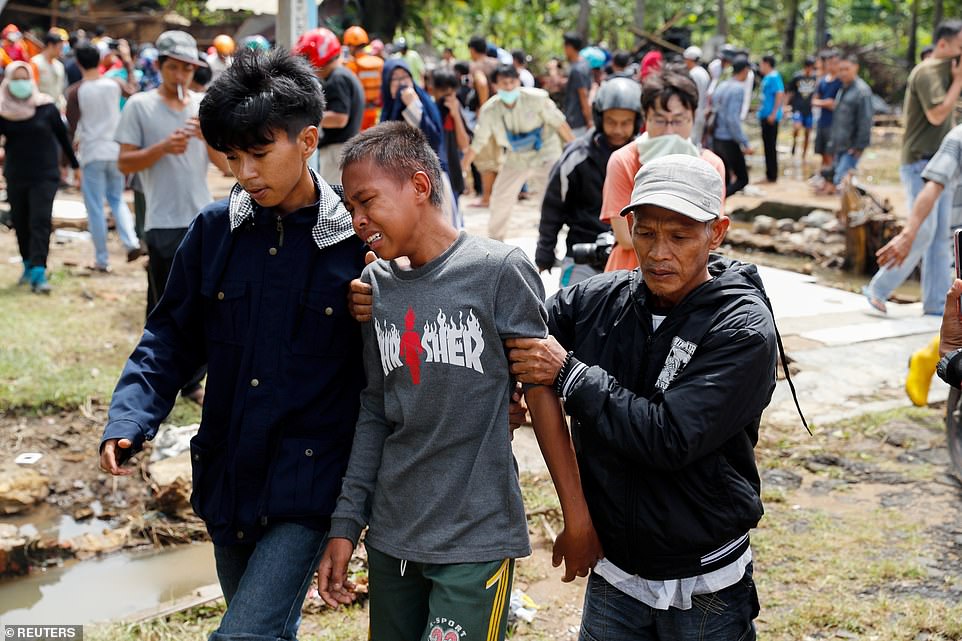 The death toll from the tsunami – triggered by a massive underwater landslide on the volcano – rose to 281 today, as rescuers using heavy machinery and their bare hands searched through debris in the hope of finding survivors. A distraight teenager is comforted after finding his relatives among the ruins of his house in Pandeglang, Banten province

Anak Krakatau has been spewing ash and lava for months. Sixty-four hectares of the southwest side of the volcano collapsed.

‘This caused an underwater landslide and eventually caused the tsunami,’ said Dwikorita Karnawati, head of the meteorological agency.

Aid trickled in to Pandeglang, the worst-affected area on Java’s west coast, and hundreds of soldiers and volunteers picked through piles of wreckage looking for bodies along a 60 mile stretch of beach.

The vast archipelago, which sits on the Pacific ‘Ring of Fire’, has suffered its worst annual death toll from disasters in more than a decade.

Earthquakes flattened parts of the tourist island of Lombok in July and August, and a double quake-and-tsunami killed more than 2,000 people on Sulawesi island in September. 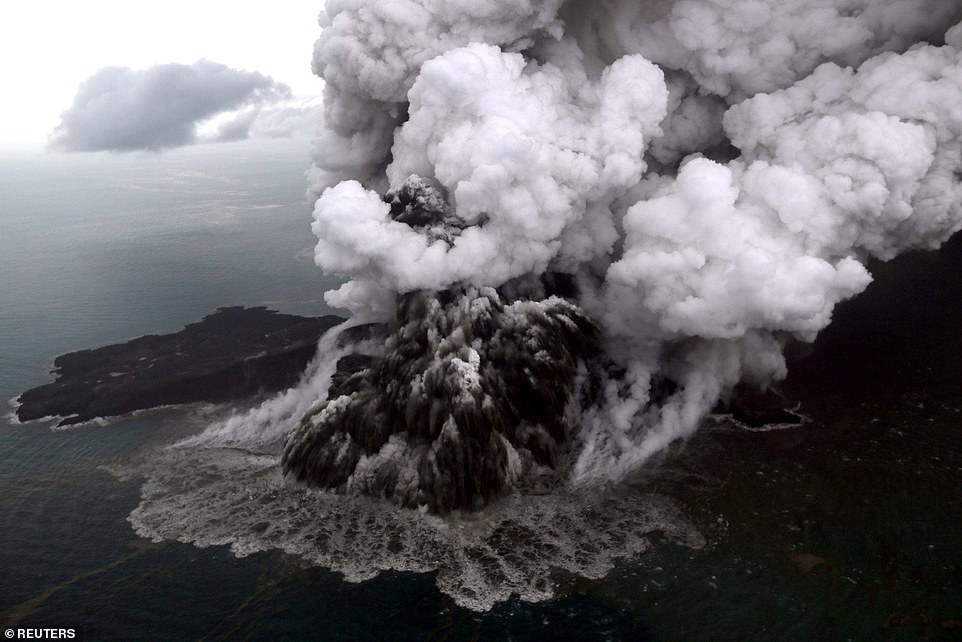 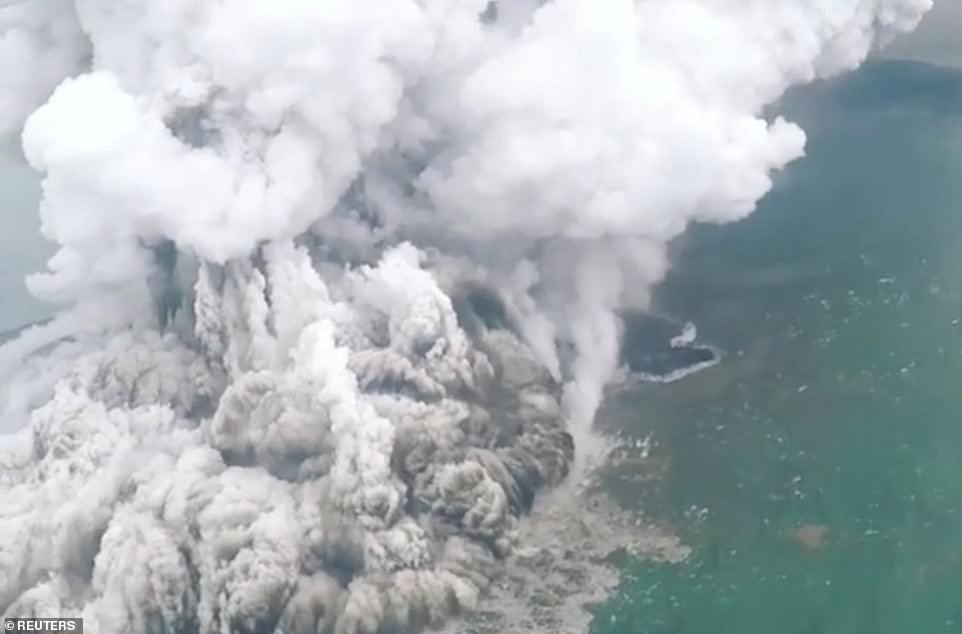 A plume of ash rises as Anak Krakatau erupts in Indonesia on Saturday evening local time. The constant eruptions have sparked fears of a second tsunami 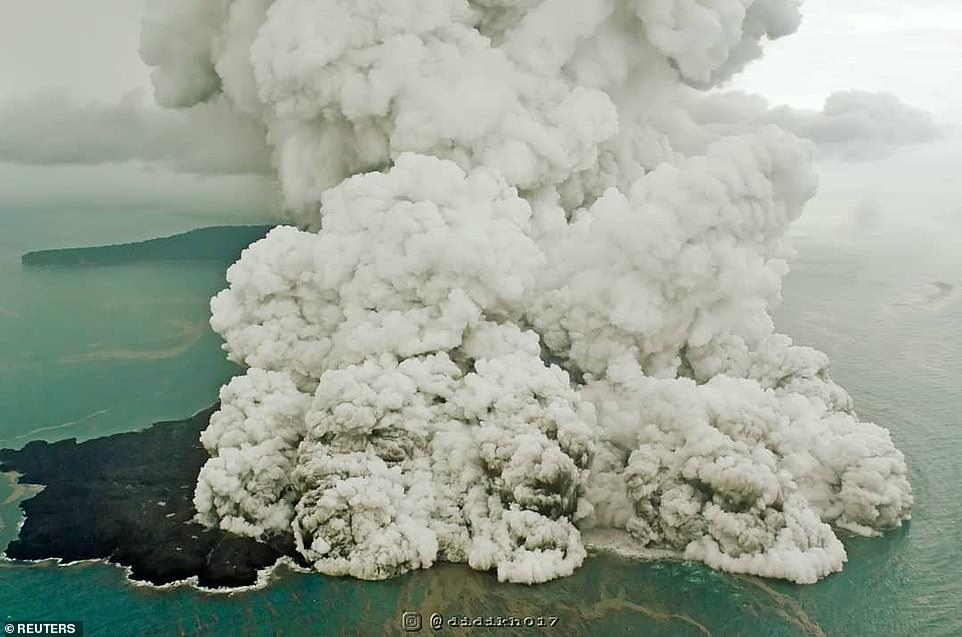 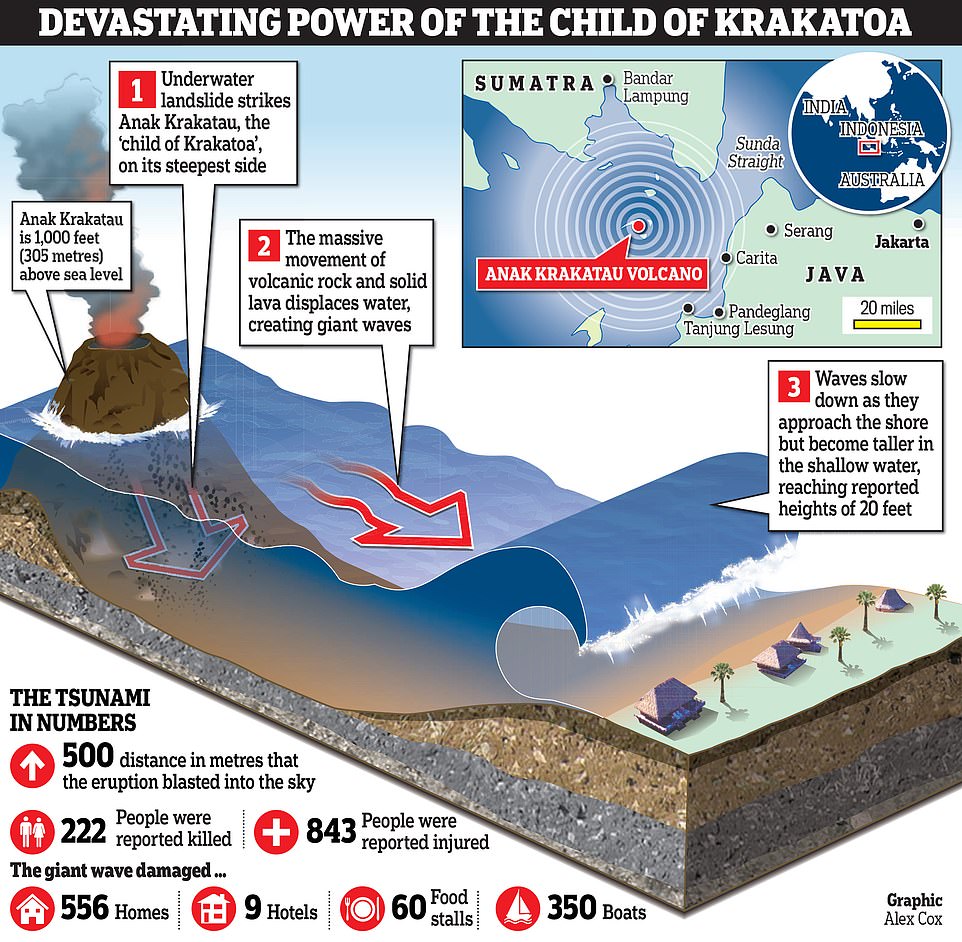 More than 1,000 people are also reported injured after a giant wave destroyed hundreds of homes, hotels and businesses along tourist beaches in Java and Sumatra on Saturday

Saturday’s tsunami came with almost no warning and destroyed more than 700 buildings, from small shops and houses to villas and hotels.

President Joko Widodo visited the area on Monday and said an alert system was needed.

‘I’ve instructed the Meteorology, Climatology, and Geophysical Agency to buy a detection device or a system that would provide an early warning so that the residents can be spared,’ he told reporters.

Several scientists said earlier the most likely cause of the tsunami was the collapse of part of the volcano.

Families continued to stream out of the area on Monday for fear of further tsunamis, jamming roads already blocked by debris.

Britain, Australia and Canada advised nationals to monitor the situation closely and the United States embassy said it was ready to assist if needed. 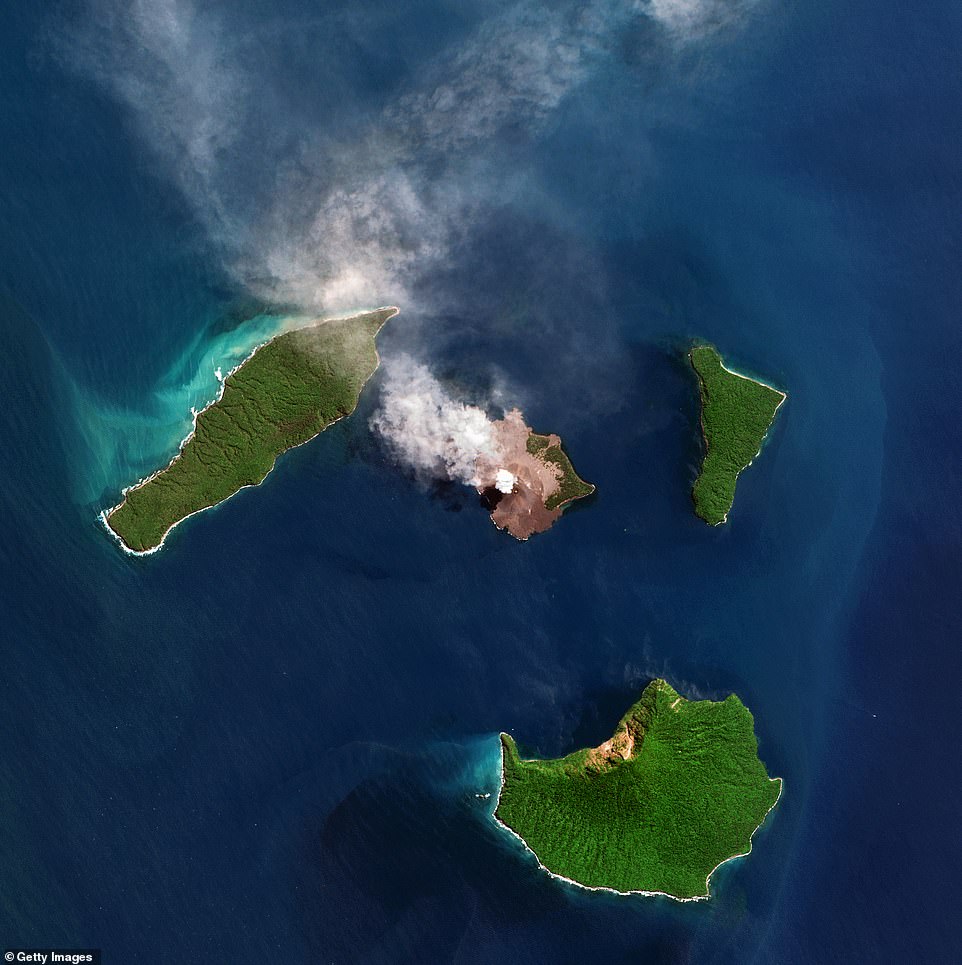 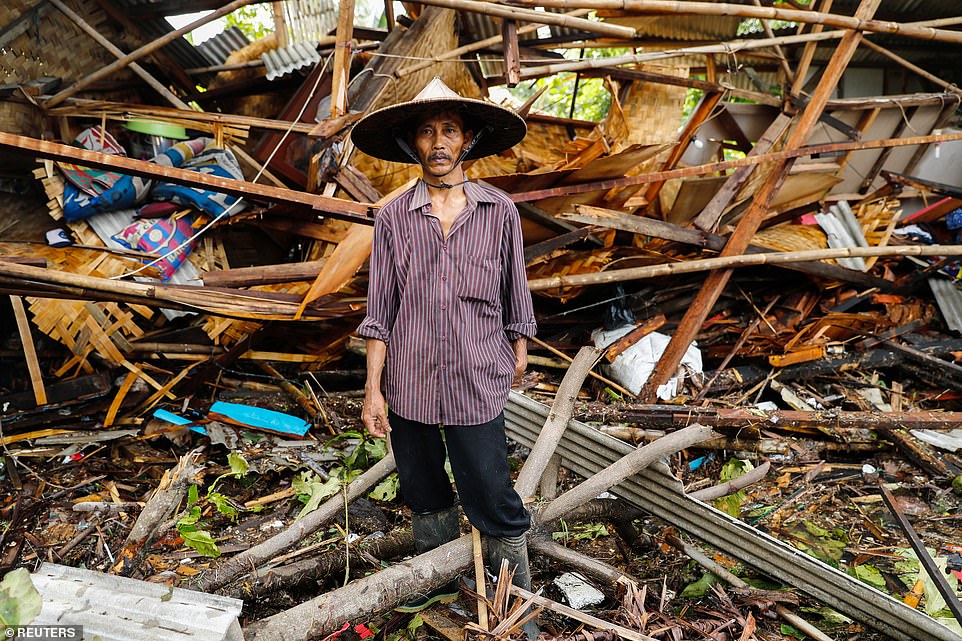 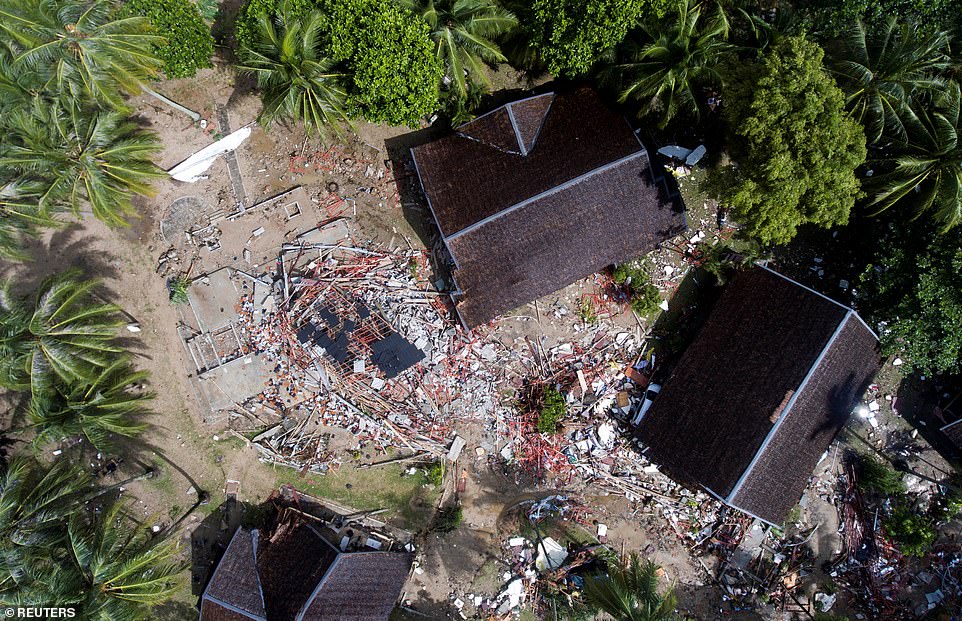 More than 1,000 people were injured and the death toll “will continue to rise”, said disaster agency spokesman Sutopo Purwo Nugroho 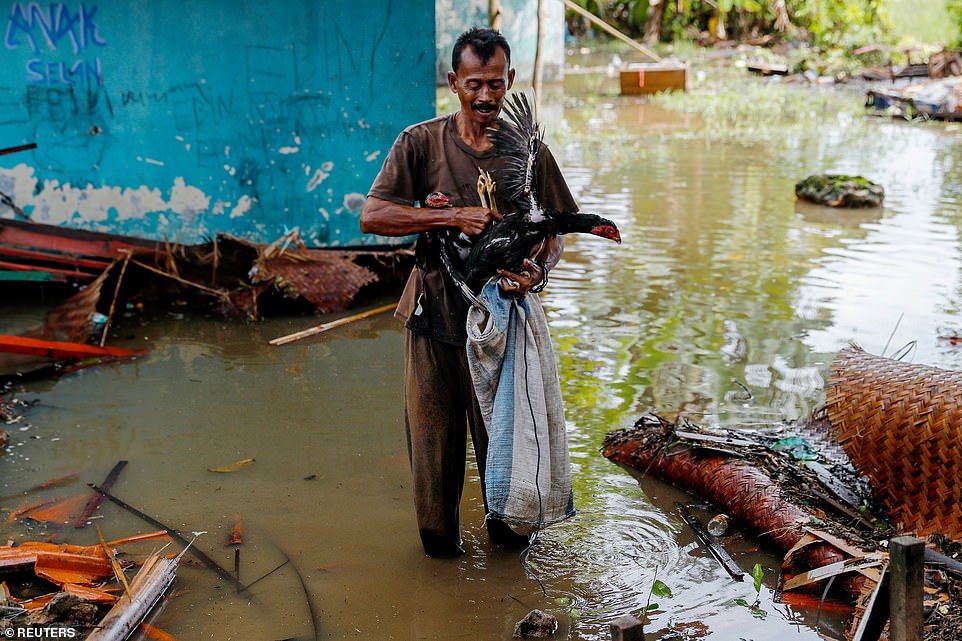 A man holds a chicken at his house which was hit by the tsunami in Pandeglang, Banten province, Indonesia. The death toll from the disaster has passed 280 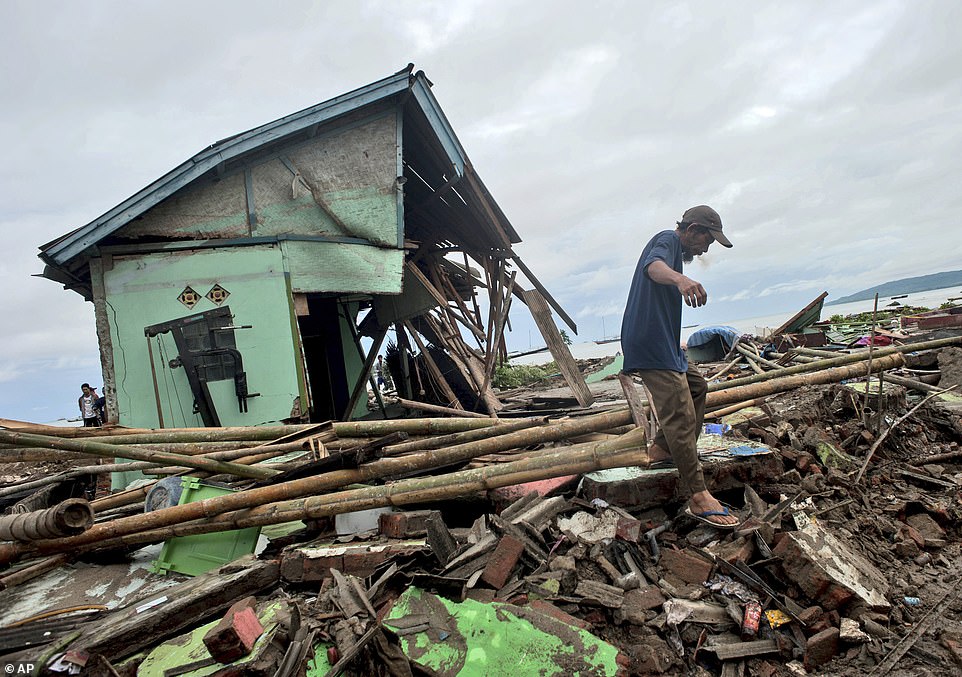 A man makes his way past a house badly damaged by the tsunami in Sumur, Indonesia. Doctors worked to save injured victims while hundreds of military and volunteers scoured debris-strewn beaches in search of survivors today 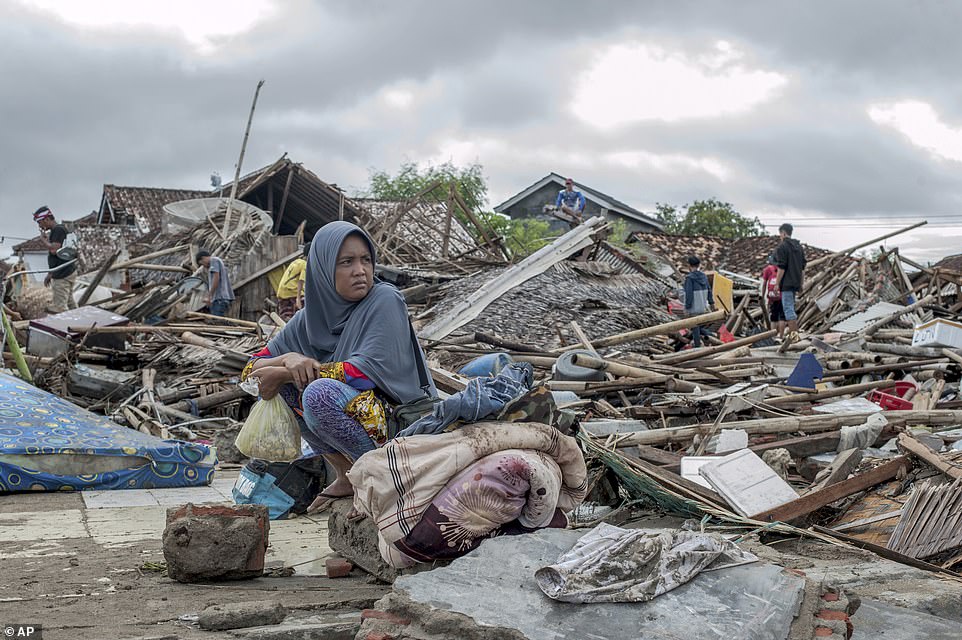 A tsunami survivor sits on a pice of debris as she salvages items from the location of her house in Sumur, Indonesia

The timing of the tsunami over the Christmas season evoked memories of the Indian Ocean tsunami triggered by an earthquake on December 26, 2004, which killed 226,000 people in 14 countries, including more than 120,000 in Indonesia.

Witnesses recalled how a light breeze was followed by a huge wave that smashed together wooden fishing boats moored off the coast.

Dented vehicles were shunted together by a wave that carried chunks of metal, felled trees and left roof tiles, wooden beams and household items strewn across roads. Some cars ended up in rice fields.

Nurjana, 20, ran for half an hour to the mountains after the tsunami hit. Her beachside stall, where she sold snacks to tourists, was washed away.

‘I opened the door straight away and saved myself. I jumped over the wall,’ she told Reuters. 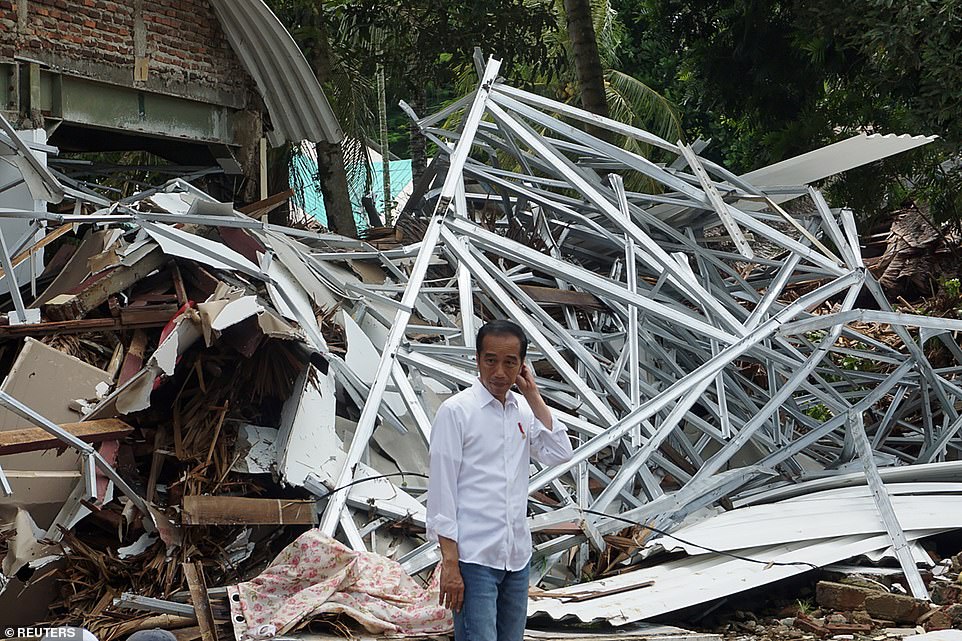 The timing of the tsunami over the Christmas season evoked memories of the Indian Ocean tsunami triggered by an earthquake on December 26, 2004, which killed 226,000 people in 14 countries, including more than 120,000 in Indonesia. Pictured: The collapsed Hotel Mutiara Carita after it was hit by the tsunami in Pandeglang, Banten province 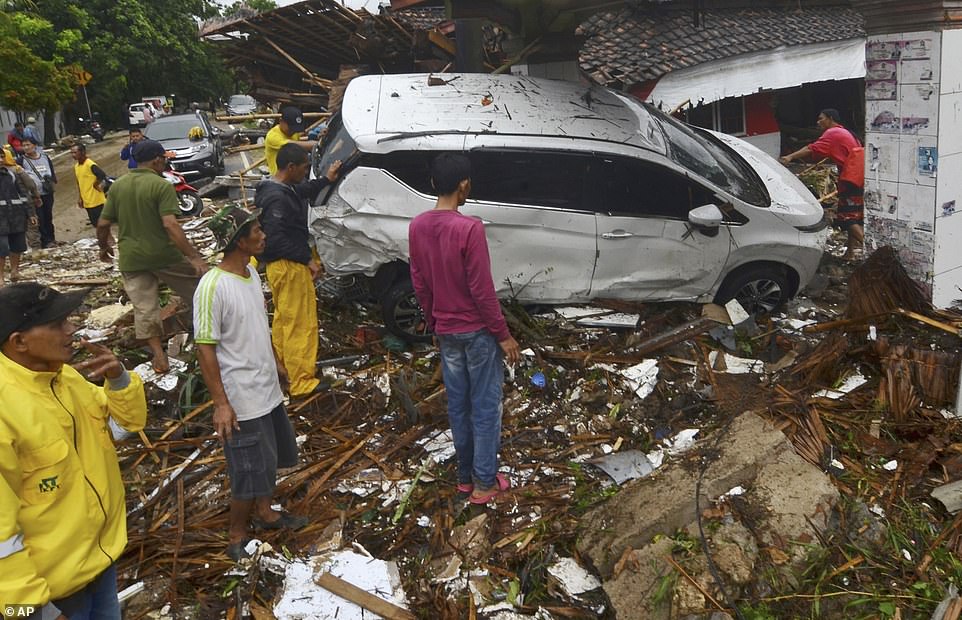 Dented vehicles were shunted together by a wave that carried chunks of metal, felled trees and left roof tiles, wooden beams and household items strewn across roads. Some cars ended up in rice fields 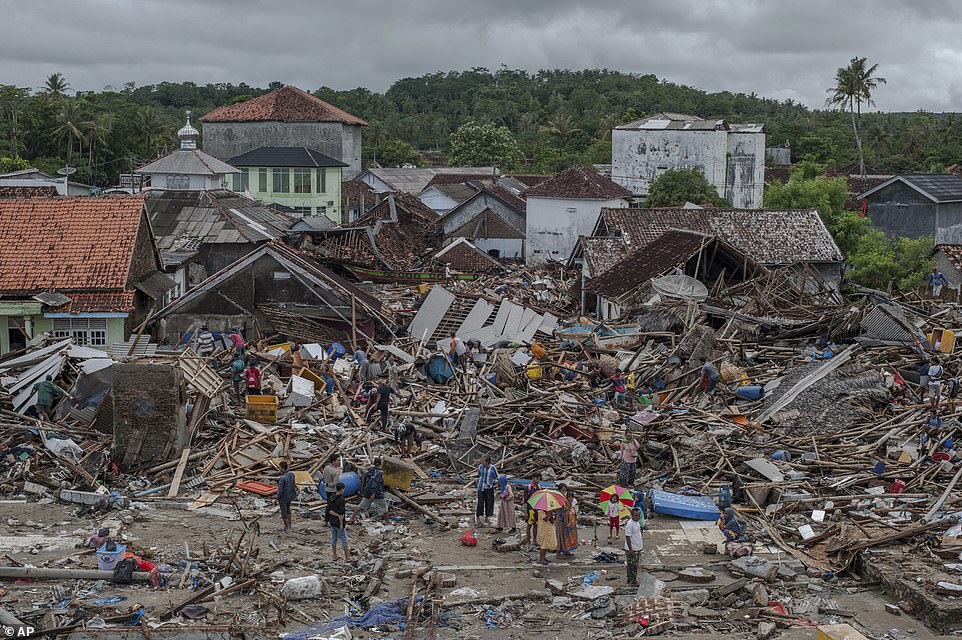 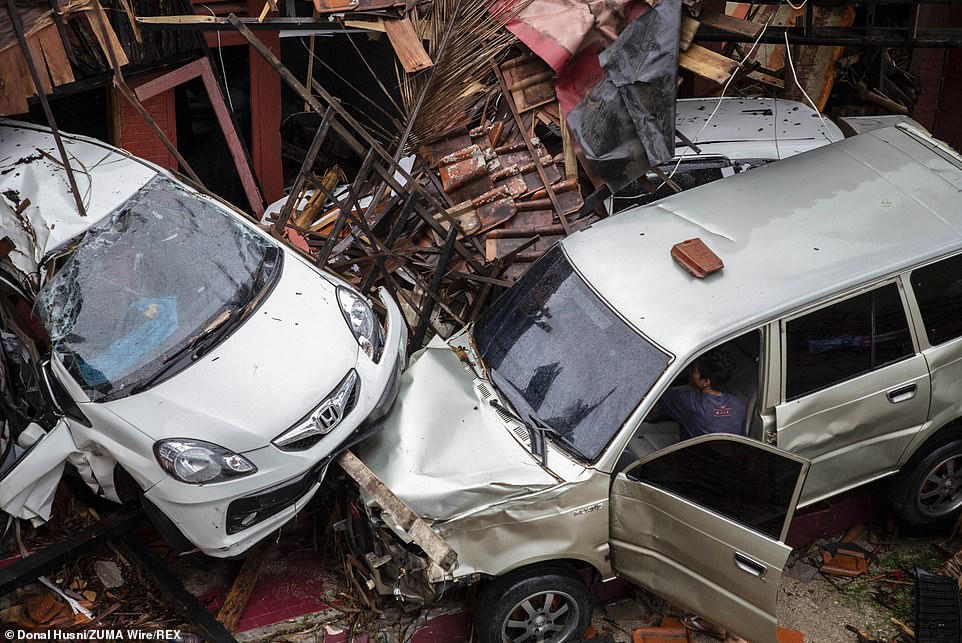 Rescue teams used their bare hands, diggers and other heavy equipment to haul debris from the stricken area around the Sunda Strait, as thousands were evacuated to higher ground. This was the scene of destruction in Banten province 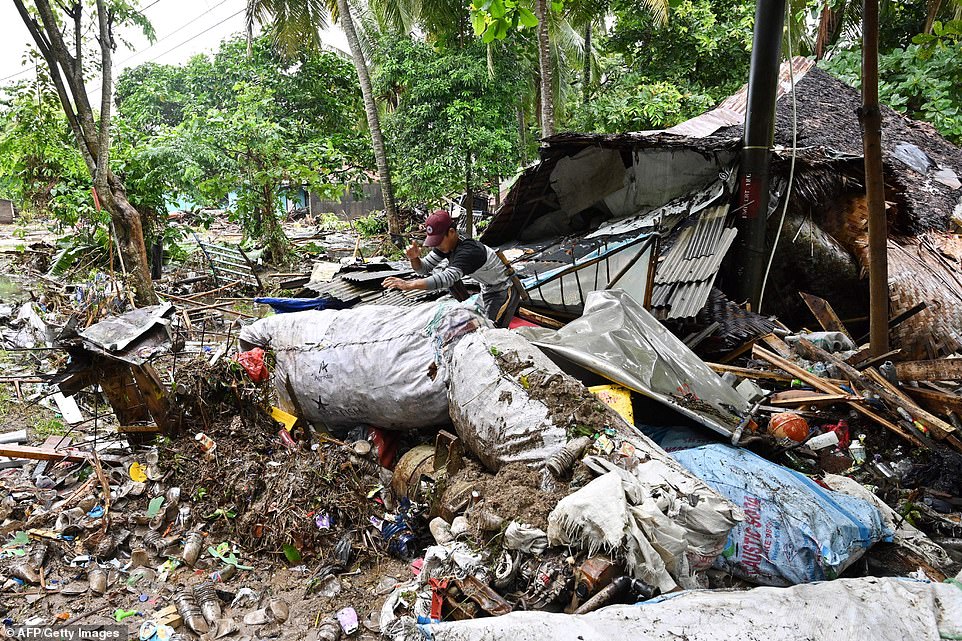 An Indonesian man searches for the body of a relative at a damaged house in Sukarame village in Carita, Banten province on , two days after a tsunami 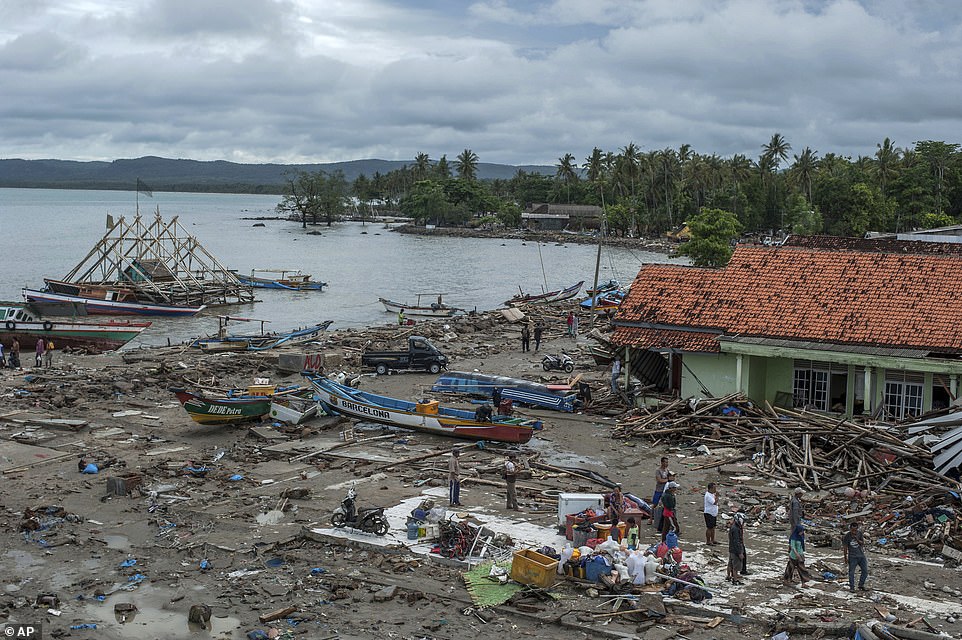 People inspect the damage at a tsunami-ravaged village in Sumur, Indonesia. The deadly tsunami gushed ashore without warning on Indonesian islands, khundreds of people on a busy holiday weekend

Heavy equipment was being used to help with rescue efforts. Medics were sent in with the military, while groups of police and soldiers reached remote areas.

One team of volunteers who worked on disasters in Lombok and Palu was looking for victims at Villa Stephanie, one of dozens of beachside retreats, where eight people were missing.

‘This year has been pretty busy. The disasters have been more severe,’ he said.

At least five bodies were found in that area on Monday. Military and other rescuers used an excavator to remove cars and debris, including piles of steel roofing tangled like spaghetti.

The western coast of Banten province in Java, Indonesia’s most populated island, was also badly hit and at least 60 people were killed in Lampung in southern Sumatra, the disaster agency said.

Authorities buried 16 bodies in a mass grave in South Lampung late on Sunday at the request of relatives, Colonel Erwin Djatmiko, a military commander there, told Reuters.

Television footage showed how the tsunami washed away an outdoor stage where Indonesian rock band Seventeen was performing for hundreds of guests at a party for utility company Perusahaan Listrik Negara (PLN).

At least four band members and support crew were killed, lead singer Riefian ‘Ifan’ Fajarsyah told followers in a tearful Instagram account. The band’s drummer was among the missing.

Another 29 PLN employees and relatives were also killed.

Anak Krakatau erupted again just after 9 p.m. on Saturday and the tsunami struck 24 minutes later. Earthquake geologist Ben van der Pluijm said an underwater landslide would be ‘like suddenly dropping a bag of sand in a tub filled with water’.

The eruption of Krakatau in 1883 killed more than 36,000 people in a series of tsunamis. Anak Krakatau is the island that emerged from the area in 1927 and has been growing ever since.