Ofsted has warned secondary schools to stop suspending poorly-performing students so that they can boost league table performance.

The education watchdog has found some schools have unusually high exclusion rates – particularly in the North East and Yorkshire.

Pupils should only be suspended from school for extreme behaviour such as violence, threats towards teachers or serious disruption of classes.

But previous investigations have shown low-ability pupils have been suspended from school during exam periods for no obvious reason.

It means they have to take their GCSEs at separate centres and their poor results do not damage the school’s average.

Such ‘fixed-period’ exclusions allow schools to boost their performance in league tables by taking problem pupils off the books.

Often parents are bullied into accepting the suspension even in it has been imposed wrongly.

Yesterday, Ofsted urged heads to make sure they were only excluding pupils ‘for the right reasons’.

Regional director for the North East and Yorkshire and the Humber, Cathy Kirby, is writing to heads in her area to raise concerns about their high rates of fixed-period exclusions.

Middlesbrough, Barnsley, Redcar and Cleveland, Doncaster, North Lincolnshire, Rotherham, Sheffield and North East Lincolnshire are among the top 10 in the country for secondary school exclusions.

A fixed-period exclusion means a pupil is barred from attending school for a set period of time, which can be anything from part of a school day up to a maximum of 45 days within a single academic year. 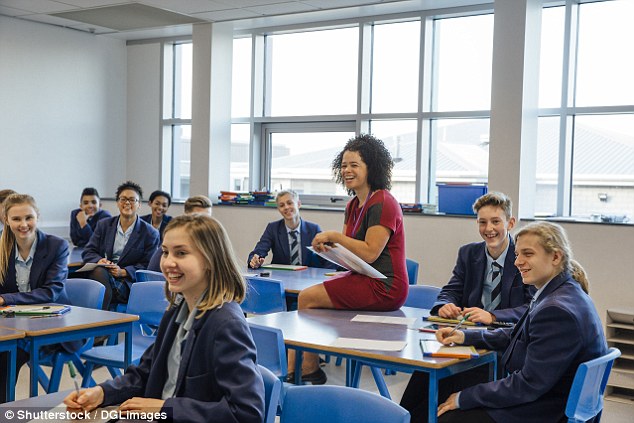 Yesterday, Ofsted urged heads to make sure they were only excluding pupils ‘for the right reasons’

Ofsted said yesterday it is ‘never acceptable’ to exclude pupils, either formally or through pressure on parents, ‘specifically to boost school performance’.

To tackle this issue, inspectors will look even more closely for signs of ‘off-rolling’.

Mrs Kirby said: ‘I fully appreciate variations between individual secondary schools and recognise that there may be valid reasons for schools to exclude pupils. ‘But it is difficult to understand why fixed-period exclusion should be so much more necessary in these eight local authorities compared with others.

‘Schools should only ever use exclusions as a last resort. If not properly applied, being removed from school can disrupt a child’s education and affect their future life chances.

‘So I am asking inspectors to look very carefully at the use of exclusion in areas with high rates compared with national and regional figures. We want to be certain that pupils are being removed for the right reasons.’

‘A Department for Education spokesman said: ‘Any decision to exclude a pupil should be lawful, reasonable, and fair, and permanent exclusion should always be used as a last resort.

‘Should a school believe there are grounds to exclude a child, either for a fixed period or permanently, parents have the opportunity to ask for the decision to be reviewed.

‘We have announced an externally led review of exclusion practice to ensure we have a system that works for every pupil, regardless of background.’